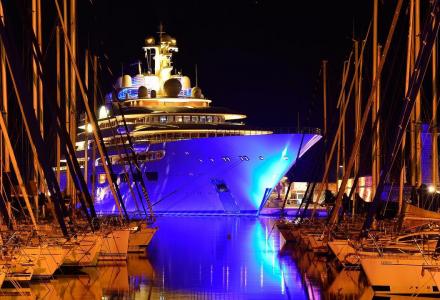 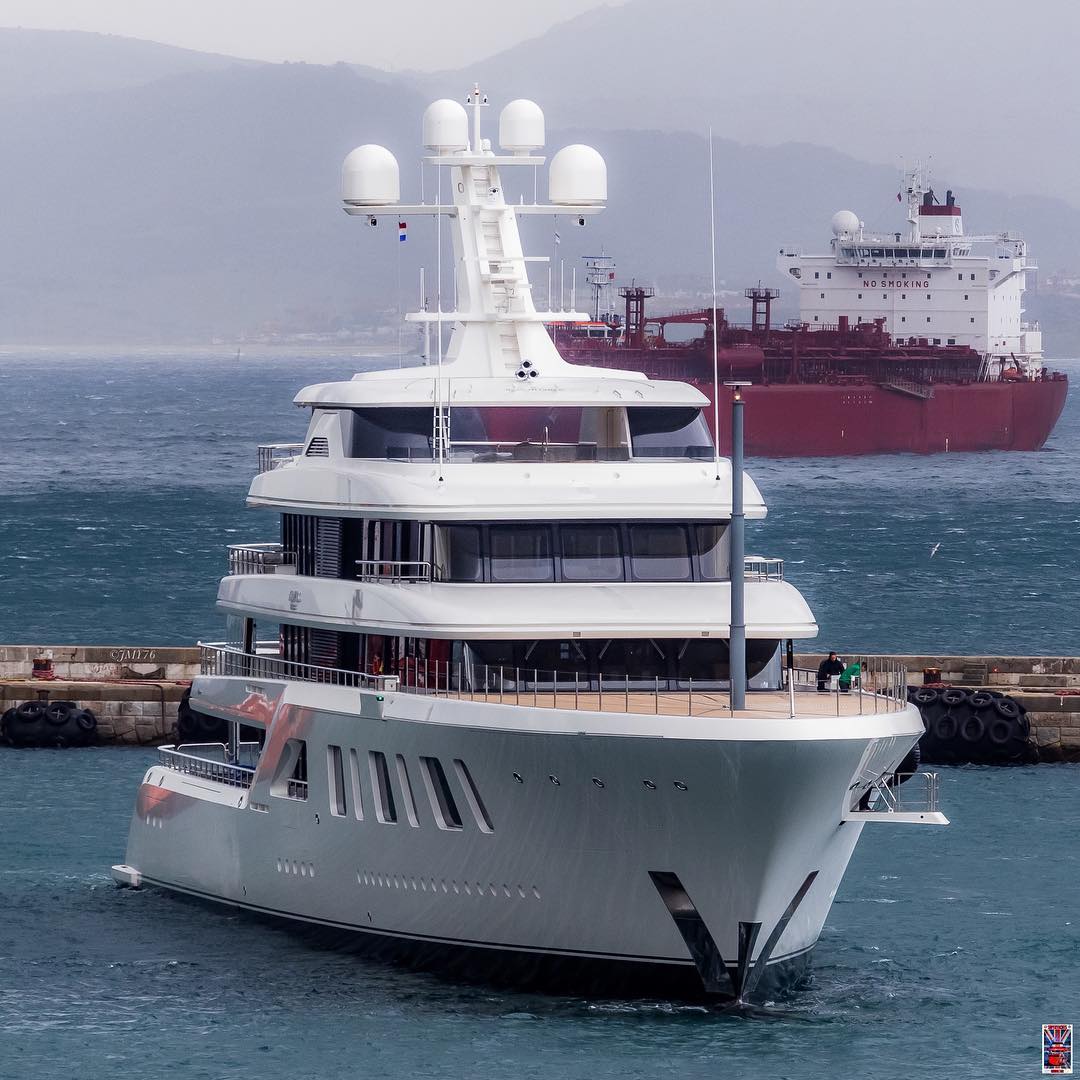 92-meter Aquarius (Project Touchdown) was launched by Feadship in September 2016.  The superyacht features a resolutely contemporary exterior design with a number of archetypal Feadship elements, such as a conventional bow and raked superstructure shape. The profile comes from the boards of the Dutch company Sinot Exclusive Yacht Design, which was also responsible for the interior design together with the owner's design team in close cooperation with Feadship De Voogt Naval Architects.
Tango - Julien Hubert 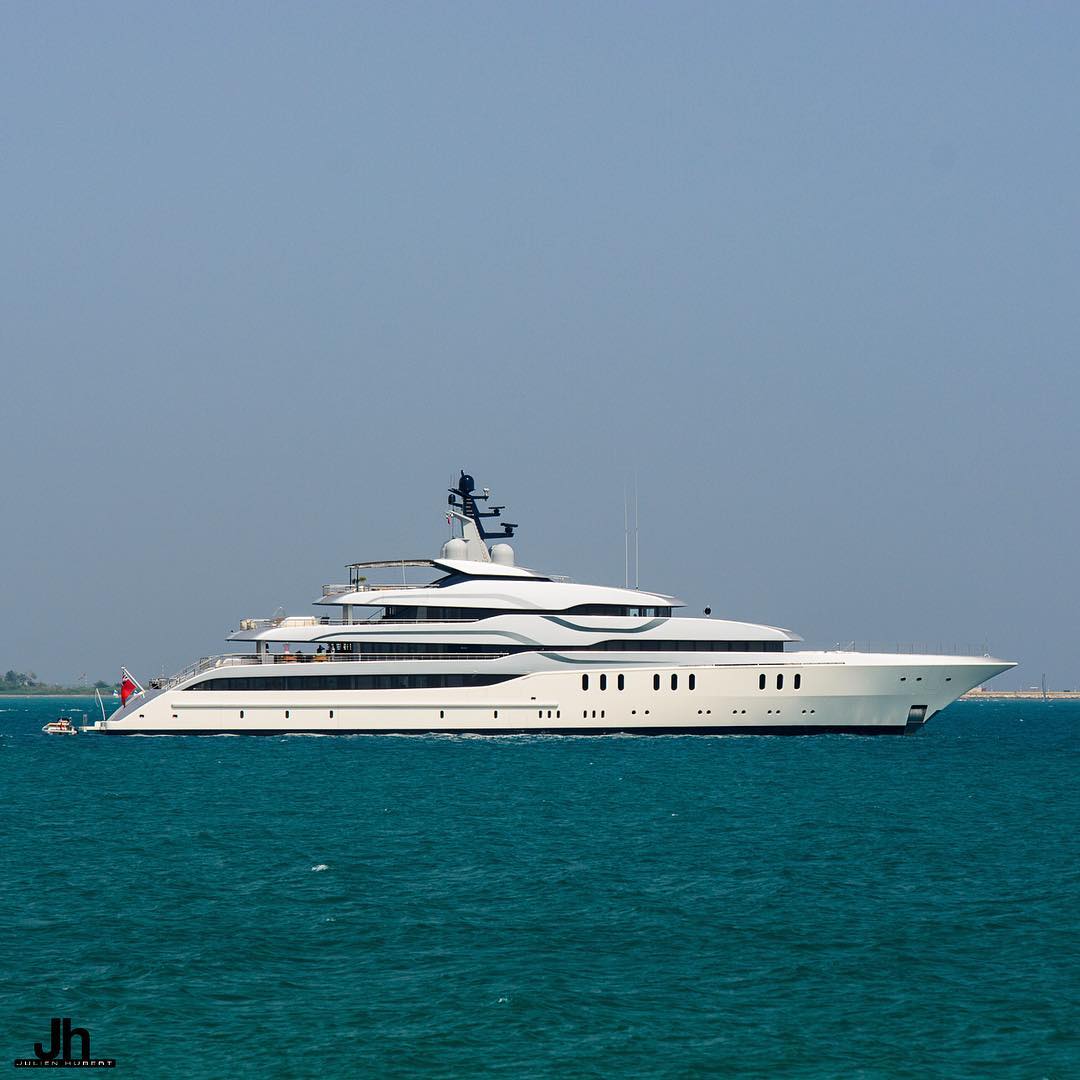 Tango is a 78.00m luxury motor yacht, built by Dutch shipyard Feadship in 2011. With a beam of 12.20m and a draft of 3.65m, she has a steel hull and aluminium superstructure. This adds up to a gross tonnage of 1250 tones. Tango is classified by Lloyds.
Solandge - @Yachts_la_ciotat 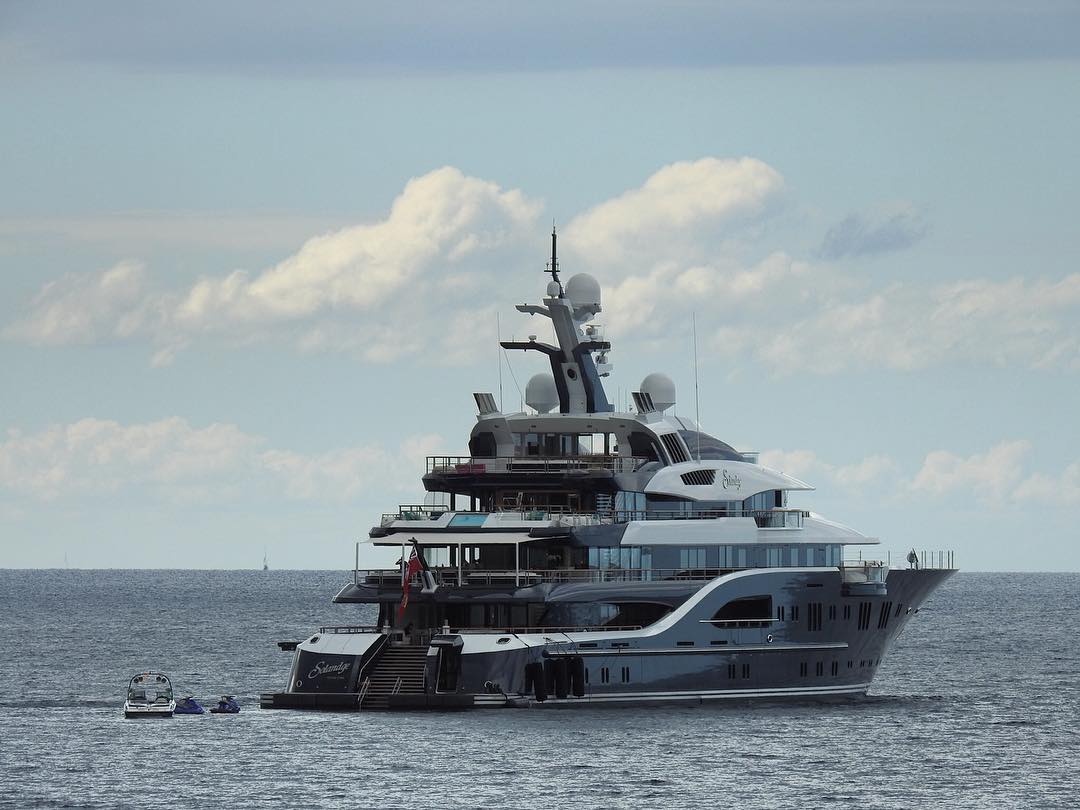 The 2013-built superyacht Solandge was launched at Lurssen. Her exterior design is the work of Espen Oeino, whilst Rodriguez Interiors and Dolker&Voges were responsible for the interior. The 85m superyacht boasts a number of unique areas to accommodate all needs, ranging from a large indoor movie theatre, to a vast main salon with bar, games room and seating areas. Solandge can sleep up to 12 guests in 7 staterooms, including a panoramic master deck featuring 180 degree windows, private dressing room, his and hers bathrooms and a private deck with spa pool.
Dilbar - @_christo303_ 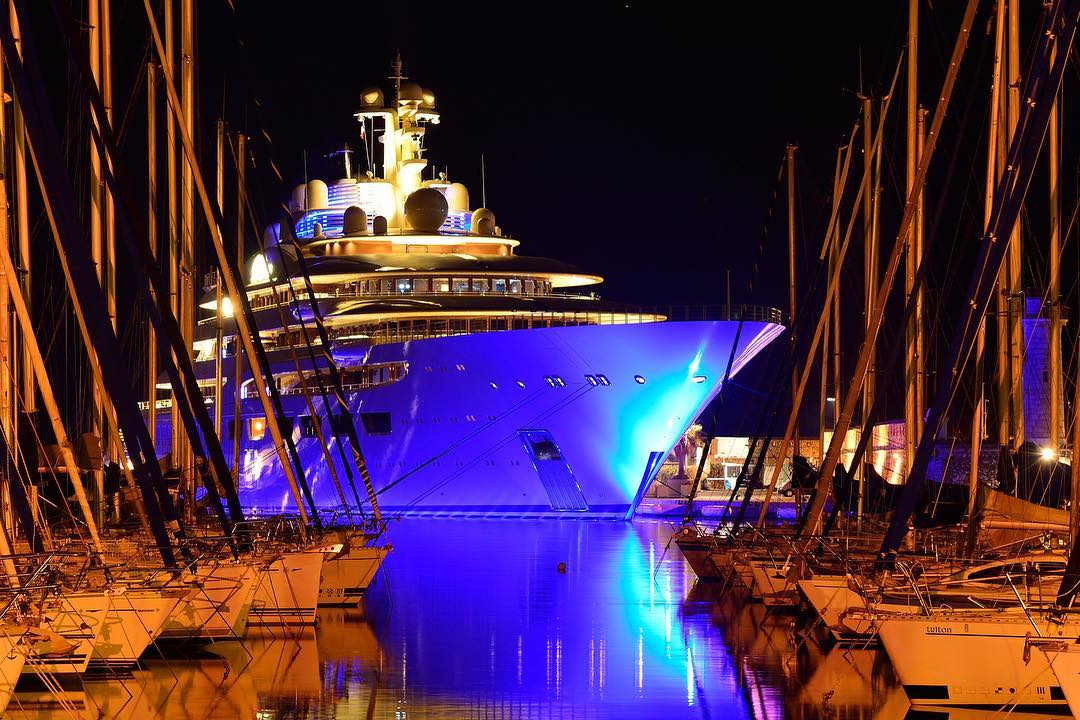 The fourth largest vessel in the world, Dilbar measures 156m. Launched by Lurssen in November 2015, the superyacht was built for Russian billionaire Alisher Usmanov. Her exterior design is by Espen Oeino with interiors by Andrew Winch.
Air - @Feadship 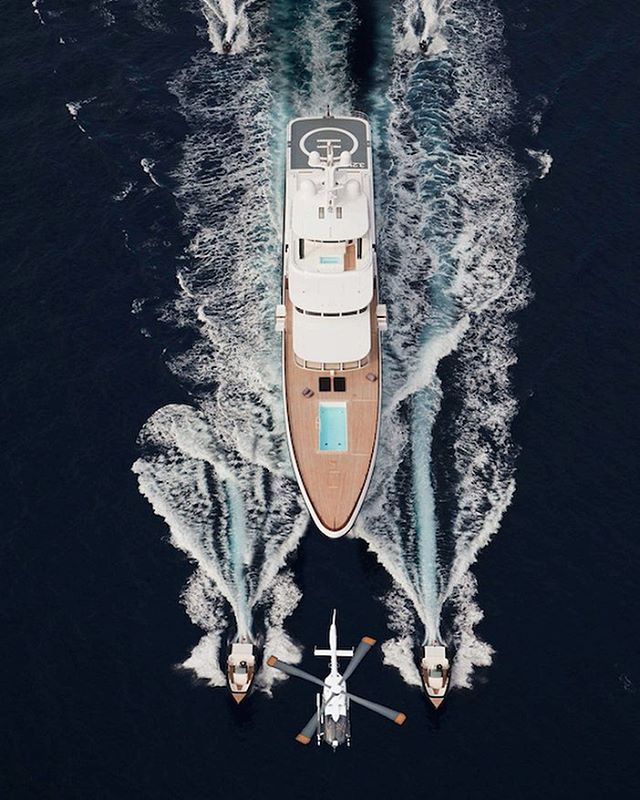 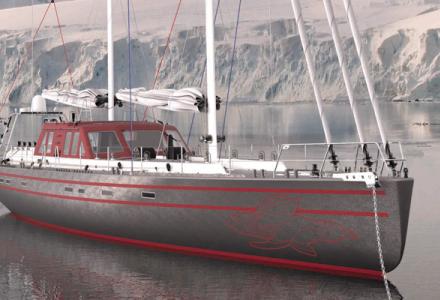 Pelagic 77 by KM YachtBuilders begins outfitting
This month the 23.5-meter sailing yacht Pelagic 77 left the canopy at KM YachtBuilders in the Netherlands, where there were installed the keel and rudders. The boat has now moved to the outfitting shed. The representative of Pelagic Yachts Skip Novak and Jordi Griso also took part in the construction. Tony Castro (design) described yacht as "an evolution of the 22.5-metre Pelagic Autralis". The aluminium work is now complete and the interior is underway in the Dutch yard's joinery department. The next stage will include the mechanical, electrical and hydraulic systems installed before interior outfitting takes place. Expeditionary ship Pelagic 77 is designed for expeditions in high latitudes. This implies an enhanced autonomy, ease of handling of sailing areas and simple technical systems that a crew can operate without any special assistance.Key features include a large pilothouse and a comfortable seating area, as well as a stern galley, which makes up most of the guest areas. The interior is made in bright colours and consists of six double cabins located in front of the wheelhouse, with two heads and shower cabins, divided between them.A yacht with a beam of 6.2 meters is expected to be delivered at the end of 2020.
April 8, 2020 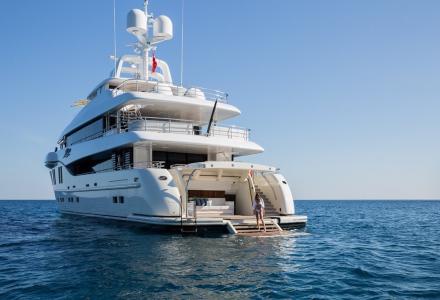 Inside 41m Rüya by Alia Yachts and Sorgiovanni
Turkish builder, Alia Yachts, has presented its fully custom 135-foot (41.30-meter) superyacht, Rüya, designed inside and out by Sorgiovanni Designs.Rüya— which means ‘Dream’ in Turkish— is a high volume tri-deck motoryacht built in composite to Lloyd Register with a Gross Tonnage of 499 GT.Launched in July 2015, Rüya is a triumphant example of a pure custom creation. She demonstrates how a truly capacious yacht can be designed and built to grace the ocean with the timeless elegance of a far leaner vessel.Commissioned by experienced owners seeking a fully custom-built, go-anywhere superyacht, Rüya is a 499 GT Lloyd’s Register classed composite construction. Her clean, flowing lines flatter the tri-deck configuration, emphasising her length.The well-protected bridge and the open main-deck seating areas are further complemented with a fabulous 93 m² sundeck with full bar and a 10-person Jacuzzi. To fulfill the owner’s brief for a yacht that would facilitate relaxed living, the interior design is very much that of a luxe beach resort in the tropics.Exotic woods, bamboo and other natural materials create a sumptuous, tactile appeal, and a casual ambiance that belies the design discipline at work in this exceptional yacht.
April 8, 2020 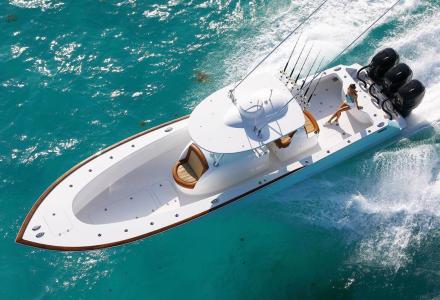 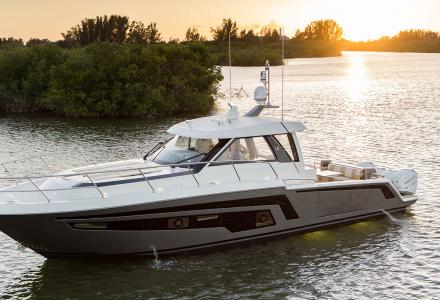 Ocean Alexander represents new 45 Divergence-coupe
Ocean Alexander took the industry by surprise with the launch of the Divergence line. Their newest 45’ boat that transcends boundaries by flawlessly merging the comforts of a yacht with the size, swiftness and accessibility of a sport boat.The forward main deck holds a large and comfortable settee that can be converted into a table with wrap seating, making it the ideal spot for luxurious sunbathing and pure, restful relaxation.The helm on the 45D is completely focused on functionality while still maintaining the level of luxury you’ve come to expect from Ocean Alexander. The fibreglass helm station contains the latest Mercury and Garmin electronics and has the option of being customized with carbon fibre inserts. A/C vents and triple bolster seats ensure everyone at the helm is as comfortable as possible. As always, the console and display pod are designed for more ergonomic ease, enhancing the piloting experience.The spacious, open-air galley on the 45D is perfect for a quick snack or cooking up the catch of the day. Amenities include a Scandvik stainless steel sink, a U-Line refrigerator, Kenyon stove and fully enclosed fibreglass cabinets that provide plenty of storage space. The spacious salon is perfectly finished with dovetailed, solid-wood cabinetry, and features a hi-low walnut table as well as a U-shaped settee that converts into a comfortable queen berth with extra storage below. With a wet bar, Isotherm fridge, enlarged skylight and three windows, this area is the perfect spot to sit back and take a break from the outdoors.
April 7, 2020 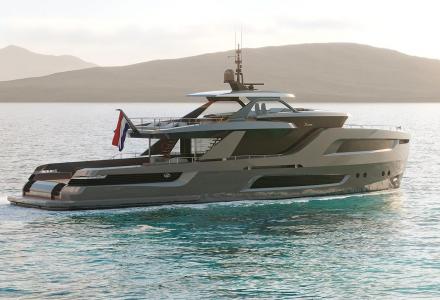 Holterman Shipyard showcases new 32.6m X-Treme105
Dutch shipbuilder Holterman Shipyard showcases new 32.65m superyacht X-Treme105. The yacht is made from the steel and aluminium and features Diana Yacht Design naval architecture and a robust exterior designed by Bernd Weel, while Trimm Design completed her interior designs. The X-105 features the latest technological developments such as a wet launch system. This system is suitable for a RIB up to 10m and contains an integrated 5m long swimming pool with adjustable depth due to a movable bottom. The midship holds a garage with doors folded on either side. The garage offers plenty of space for multiple water toys such as two jet skis and a RIB up to 3.45m. All essential technical systems are double-equipped for optimal reliability, such as bow thrusters, stern thrusters, stabilizers and watermakers. The two steerable nozzles do not only make the ship silent but also makes the ship more manoeuvrable.The outdoor deck flows seamlessly over into the spacious salon with a well-equipped and grand Galley. That same level holds the owner's quarters with ensuite sanitary facilities. On the lower deck, the 4 double guest bedrooms are accommodated with ensuite sanitary facilities as well. This deck also holds the crew area with two double cabins, of which one with bunk beds. The wheelhouse has an open connection to the salon and is located above the owner's cabin. The robust exterior and stylish interior make for an exclusive experience suitable for a yacht of this calibre.X-105 equipped with two Volvo D16MH engines and also can reach a maximum speed of 15 knots and cruise at 10 knots with 2,400 nautical miles. The first hull expected to be delivered in July 2021.
April 7, 2020
All news