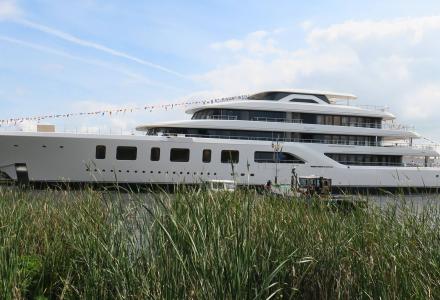 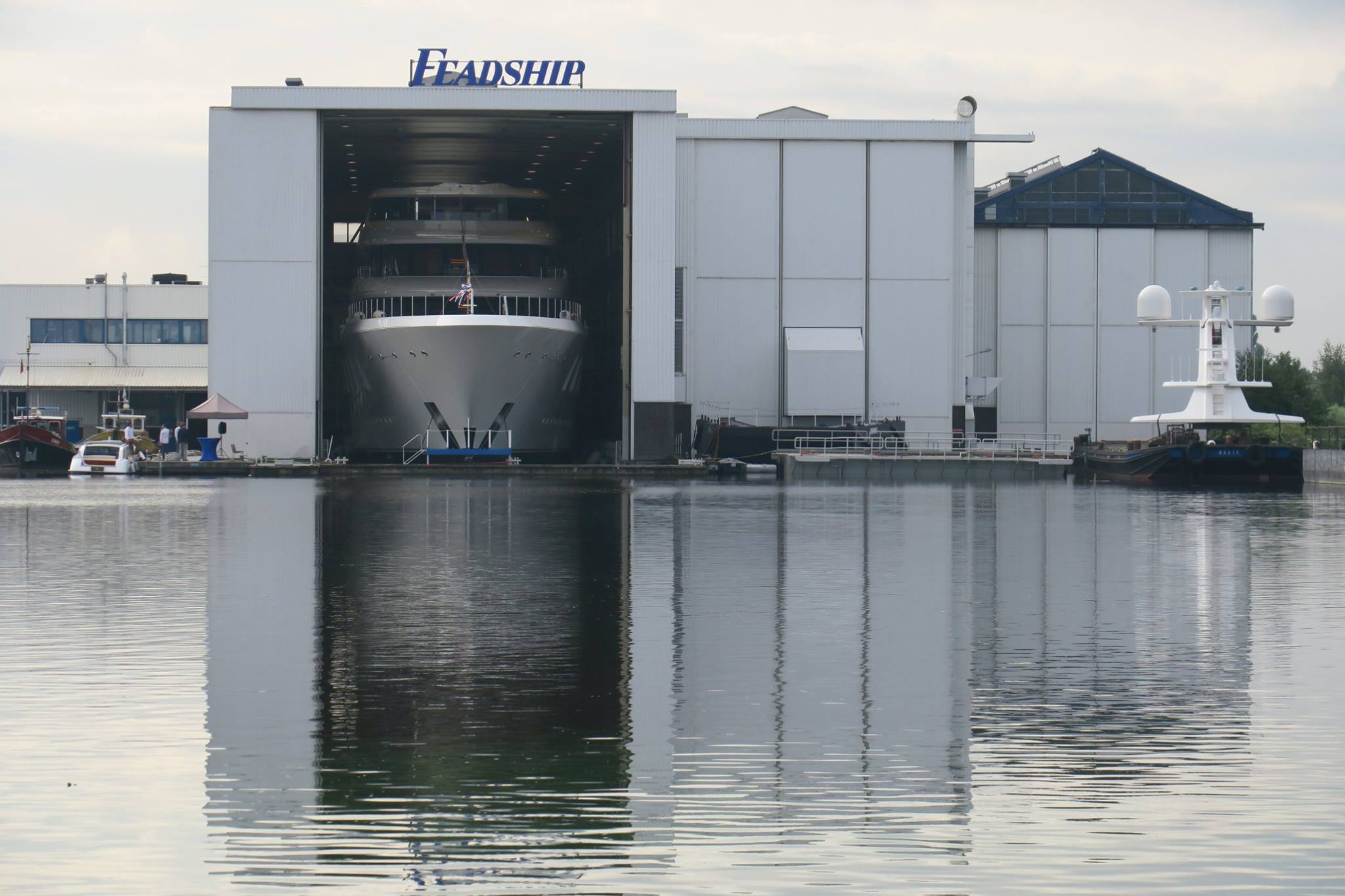 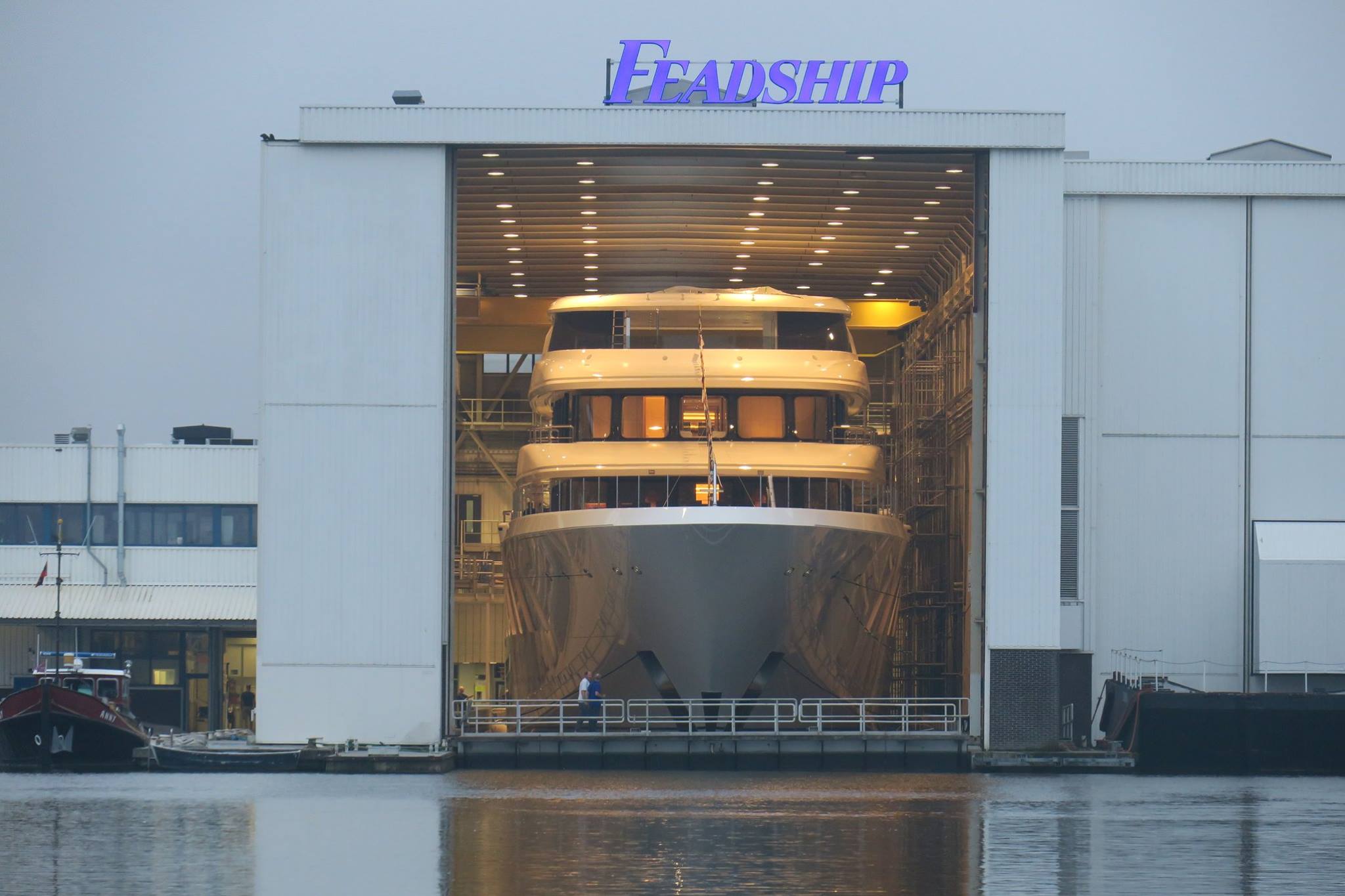 92m Aquaruis was initially built at Scheepswerft Slob and then was relocated to the Dutch shipyard's finishing facilities in June 2015. 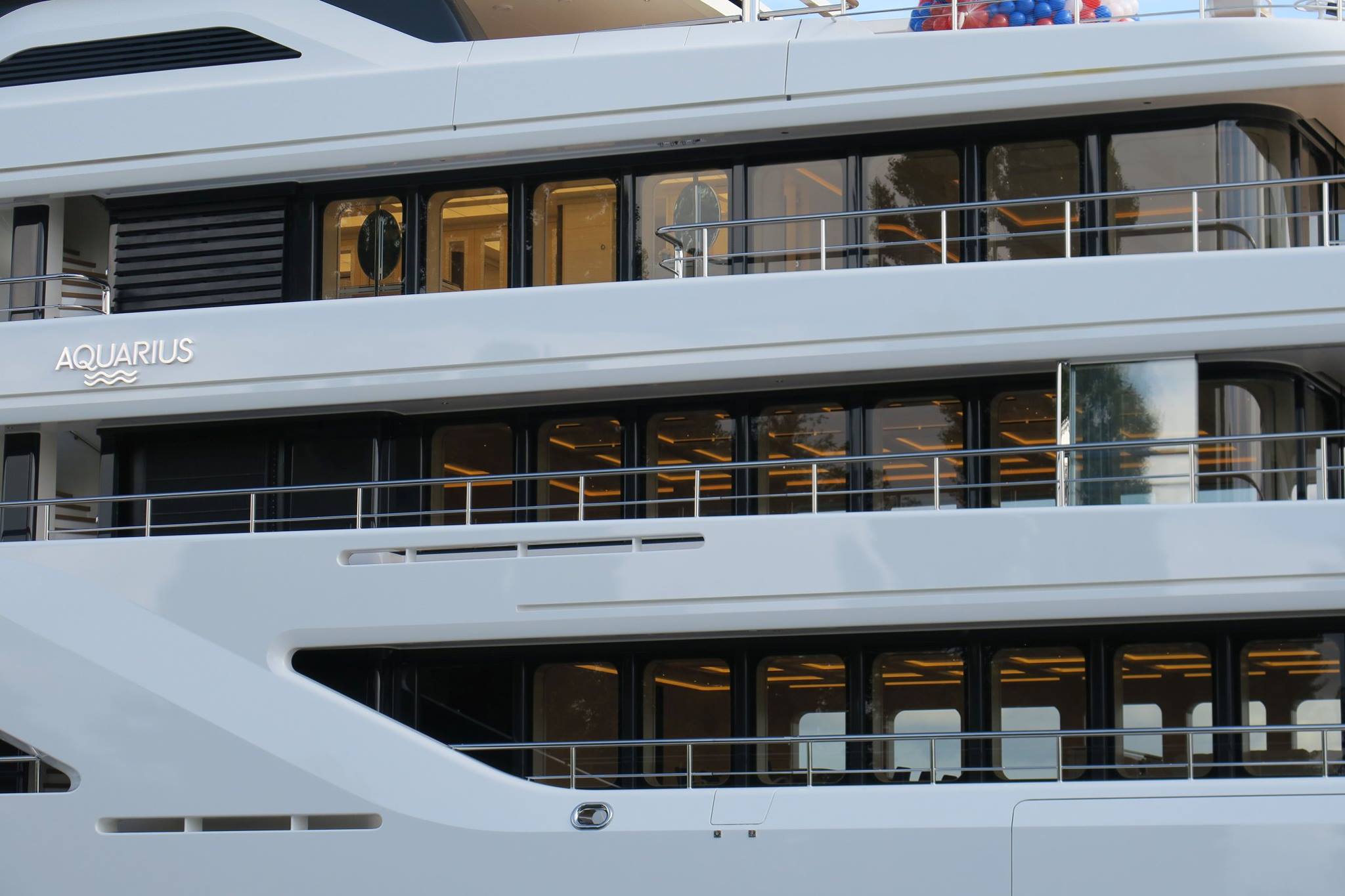 Sinot Exclusive Yacht Design is responsible for both the exterior and interior of the superyacht, whilst the naval architecture comes from De Voogt.

Aquarius' key features include a helipad on the bow, a beauty salon, a large pool on the aft main deck, a gym, massage and therapy room, jacuzzi and large outdoor deck spaces. 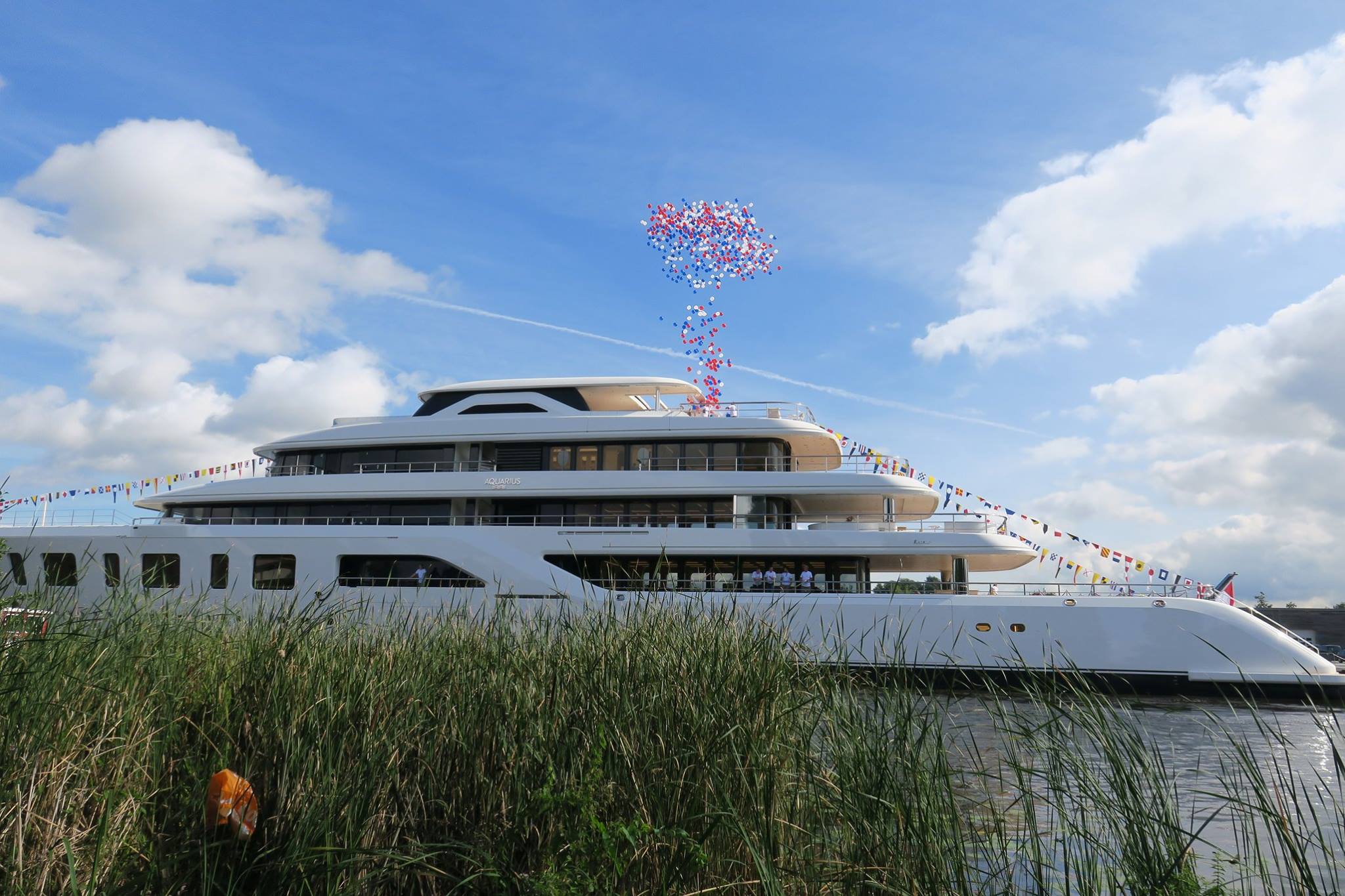 As for the accommodation, 14 guests can be carried on board in 7 suites, including 6 VIP-suites forward on the main deck and an owner's suite on the upper deck. 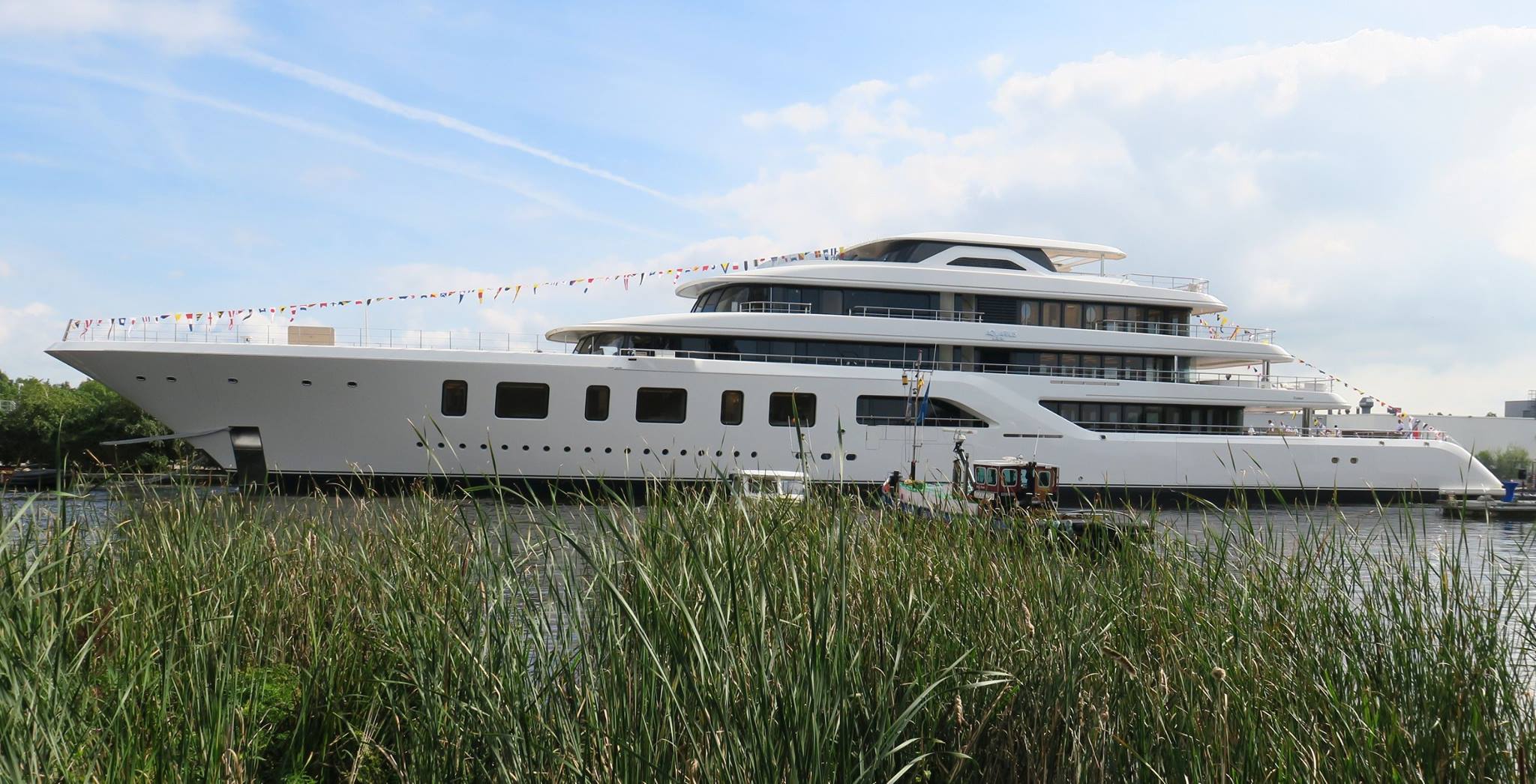 Steve Wynn is the founder and chairman of Wynn Resorts Limited, a developer and operator of luxury hotels and casinos. His net worth is estimated at $2.5 billion.
Photos by Hanco Bol via Dutch Yachting
Facebook
Twitter
Google+ 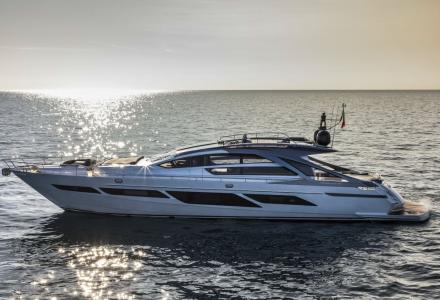 15th Unit of 28m Pershing 9X Series Sold
Denison Yachting has sold the 15th hull of the 27.97-meter Pershing 9X series. The buyer was introduced by Thom Conboy and Gary Hardcastle. Pershing 9X is the second chapter of the new "Generation X". It is a maxi coupé with aggressive lines and sumptuous comfort. At the forefront also in materials, the main construction material of the new 9X is carbon, together with fiberglass and epoxy resin. The result is a performing yacht at sea, very rich in settings and equipped with numerous technological innovations that offer a unique navigation experience and a practical maneuver, even in confined water, unthinkable on over 90 feet yachts. The prestigious and ten-year collaboration with Poltrona Frau gave life to a magnificent design object: a dashboard worthy of a super sport car, a stylistic and technical masterpiece in a masterpiece yacht, ready to amaze the world.The Pershing 9X has a four cabin configuration and can accommodate eight guests. Her performance includes a cruising speed of 38 knots and maximum speed of 42 knots.Denison has long been a leader in the yachting industry with a rich family history dating back to 1948, and the start of Broward Marine in Fort Lauderdale. Today, the company provides complete yachting services worldwide, including superyacht sales, yacht charter, crew placement, and new construction. Denison operates out of 21 waterfront offices in the United States, and one location in Monaco with a team of 100+ licensed and bonded yacht brokers. The Ferretti Group, led by Chief Executive Officer Alberto Galassi, is now one of the world’s leaders in the construction and sale of luxury yachts and pleasure vessels, with a unique portfolio of brands: Ferretti Yachts, Riva, Pershing, Itama, Mochi Craft, CRN, Custom Line and Wally.Credits: Denison Yachting
May 17, 2022 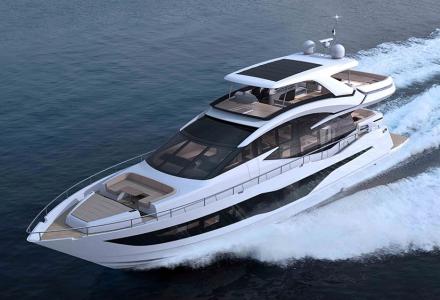 Inside Galeon’s New 25m Flagship
The 25m Galeon 800 Fly became a shipyard 's newest flagship. The yacht combines a sporty silhouette and impressive performance with a high level of comfort and luxury typically reserved for superyachts.Her noticeable design comes from Tony Castro. The yacht offers a generous upper deck with a double helmsman’s position, fully equipped bar, a comfortable sunbathing area, four tables that can be adapted to the needs of guests, two separate semicircular sofas between which the shipyard can integrate the hot tub. The main deck features a richly equipped galley with a refined kitchen island that attracts attention. The living room offers not only elegant sofas, but also unusually large windows, a pull-out TV, a modern bar and a separate day toilet.Four ensuite cabins, including a generous owner’s suite with a walk-in wardrobe and a VIP cabin with a glazed rooftop for stargazing, can be found on the lower deck. The huge hydraulic platform provides direct access to the sea. Galeon 800 Fly advanced navigation electronics and the latest technologies used on this fourth generation yacht ensure the safety and comfort of all passengers.Galeon was established in 1982 and for forty years remains a privately owned company specializing in constructing luxury yachts and motorboats. 1 400 people working on 36 000 sq. m of production and assembly halls, capable of taking on even the most ambitious yacht projects.Credits: Galeon
May 17, 2022 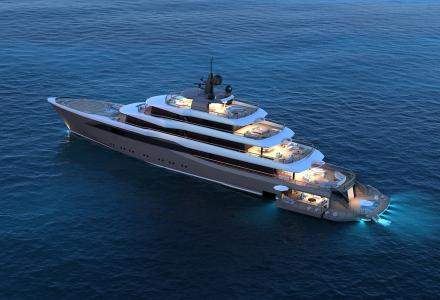 72m Moonflower 72 project To Be Built by Nauta Design and Wider
Today Nauta Design and Wider have started construction of the Moonflower 72 project, an innovative superyacht equipped with the latest generation of the Wider hybrid propulsion system.The exterior styling reflects Nauta’s trademark preference for clean, uncluttered design without fussy or superfluous detailing. Visual lightness, seamless outdoor/indoor connections, predominantly horizontal lines and the extensive use of glass, highlight the balanced proportions, while the chamfered sheer line amidships adds a dynamic aspect to the displacement hull.“The Moonflower 72 retains all the key features of modern yet timeless design, onboard liveability and maximum connection with the marine environment – fundamental characteristics of all Nauta projects,” says Mario Pedol, co-founder of Nauta Design. “With Wider we found just the right cocktail of technology and team organization to make the project a reality.”An exterior highlight is ‘The Island’ feature patented by Nauta Design, an expandable aft deck/beach club with folding bulwark terraces that provides a single walkaround space allowing guests to move freely from one side of the yacht to the other, either from inside beach club or from the open aft deck.“We’ve invested heavily in restructuring the shipyard in anticipation of orders like this one and thanks to the current management that has been working together for 30 years, Wider is able to build the Moonflower 72 to the highest quality levels,” says Marcello Maggi, one of the Founders, Shareholder and President of W-Fin Sarl, the holding Company that owns 100% of Wider equity.The Moonflower 72 will be equipped with wider hybrid propulsion system comprising two variable-speed generators of 1,860kW each and a sodium nickel battery bank of approximately 1MW. Considerable attention has been paid to the recovery of energy dispersed in the form of heat from the electrical propulsion system, as well as optimizing the operation of the onboard amenities to increase efficiency and reduce consumption by using AI to automatically learn the habits of owner, guests and crew.Wider was founded by Tilli Antonelli, who started his own company after resigning from the Ferretti Group. The first Wider 42 was launched in 2010. The Wider 150 was launched in October 2015 and was named M/Y Bartali. The Wider 165 was launched in May 2018 and she has recently been awarded by Boat International World Superyacht Awards and won in the "Displacement motor yacht between 300 and 499GT – 48m and above" category.Nauta Design was founded by Massimo Gino and Mario Pedol in 1985. Their design included the yachts for Southern Wind, projects with Baltic Yachts, but were also asked to create motor yachts of all sizes (up to 180 m) such as the exterior profile of the Lürssen megayacht Azzam.Credits: Nauta Design
May 17, 2022 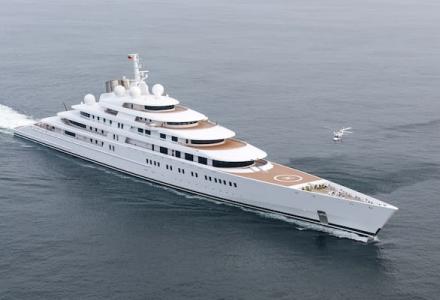 One of the Largest and Fastest Superyachts Azzam to Change Owners
Three days ago at age 73 died UAE President Sheikh Khalifa bin Zayed Al Nahyan. He was born in 1948 in the Eastern Region of Abu Dhabi. Sheikh Khalifa was appointed as the second president of the UAE in 2004, succeeding his father and founder of the nation, Sheikh Zayed al Nahyan. As president he headed one of the largest investment funds in the world, the Abu Dhabi Investment Authority, managing hundreds of billions of dollars in assets.Sheikh Khalifa bin Zayed Al Nahyan (7 September 1948 – 13 May 2022)Sheikh Khalifa bin Zayed Al Nahyan was one of the richest people in the world. The fortune of his family in 2009 was estimated at $150 billion. In the ranking of “The richest monarchs in the world" from 2007, Al Nahyan ranked second. In 2018 Forbes ranked him 43rd in the ranking with reported assets of $830 billion. AzzamHe was the owner of the world's largest motor yacht Azzam. She was built in 2013 at the German shipyard Lürssen. At 180.65 meters, with a top speed of over 30 knots, Azzam has outstanding characteristics, including her exceptionally short building time of less than three years from keel laying to delivery, in 2013. AzzamEngineer and principal designer Mubarak Saad al Ahbabi set out to build a large yacht with an innovative and timeless design that would be able to travel at high speed in warm and shallow waters. The bold and elegant exterior by Nauta Yachts incorporates many elements of visionary modern design. Renowned French designer Christophe Leoni conceived a sophisticated interior with luxurious décor inspired by the Empire style of the early 19th century.AzzamShe features a helipad, submarines on board, and 36 people can be accommodated there at the same time. Burj KhalifaThe monarch owned real estate all over the world. Hundreds of villas, palaces, castles. There are 140 properties in London alone. The tallest building in the world, Dubai's nearly 828-meter glass-and-steel spire Burj Khalifa, was named in his honor.Credits: Lurssen; Yacht Harbour archive; Unsplash; Wikipedia
May 16, 2022 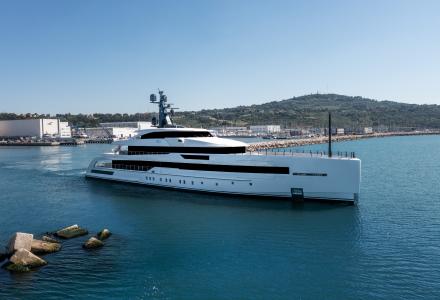 62m Superyacht Rio Delivered by CRN
The Rio superyacht has been successfully delivered to her owner and has left the marina at the Ancona Superyacht Yard, as she prepares to show off her sleek profile on her debut Mediterranean cruise. The 62m bespoke yacht is made from steel and aluminum and was designed and built by CRN in close collaboration with design and architecture studio Omega Architects, who created the exterior concept, and designers Pulina Exclusive Interiors for the interior styling. At 62 meters long and 11.2 meters in the beam, this four deck superyacht accommodates up to 12 guests in the owner’s suite and five guest suites. These include two full-beam VIPs – one on the main deck forward, the other on the lower deck – and three suites on the lower deck. The upper deck is the owner’s exclusive domain, a great oasis of intimacy and privacy that can also be enjoyed as a social zone.Rio features the taut, flowing hull lines and near-vertical bow reflect a strikingly dynamic, sporty personality. The yacht is characterized by large and luminous indoor and outdoor living areas. She reflects the character of the owner, who has a passion for being onboard. An individual who desired a shared cruising experience with family and close friends. The generous full-height windows on the main and owner decks form a visual continuum in sync with the elegant exterior architecture, offering a delightful play of light and reflected shimmer with constant direct contact with the sea. TWW Yachts is representing the buyer, while TWW Yacht Management has provided integral technical consultancy with survey and project management oversight throughout the final stages of construction and is now available for charter exclusively with TWW Yachts. Rio will be cruising in the Mediterranean this summer and from October onwards in the Caribbean.The yacht will make her world premiere at the Monaco Yacht Show, from the 28th of September to the 1st October 2022. CRN is currently building another 4 fully custom yachts: the 72-meter CRN M/Y 139, the 60-meter CRN M/Y 141, the 52-meter CRN M/Y 142 and the 67-meter CRN M/Y 143.CRN is a historic shipyard and Ferretti Group brand and company that designs and builds fully custom 45m to 95m steel and aluminum yachts. It was founded in 1963 in Ancona, Italy. The Ancona yard spans over 80,000 sq. m and boasts a large historic private marina looking out on the Adriatic, where all the CRN megayachts are made. The fleet now numbers over 400 seagoing vessels, plus several aluminum and light-alloy models built for other Ferretti Group brands. Credit: CRN
May 16, 2022
All news