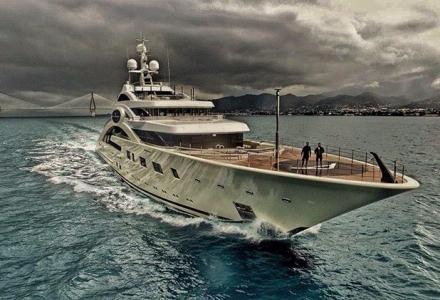 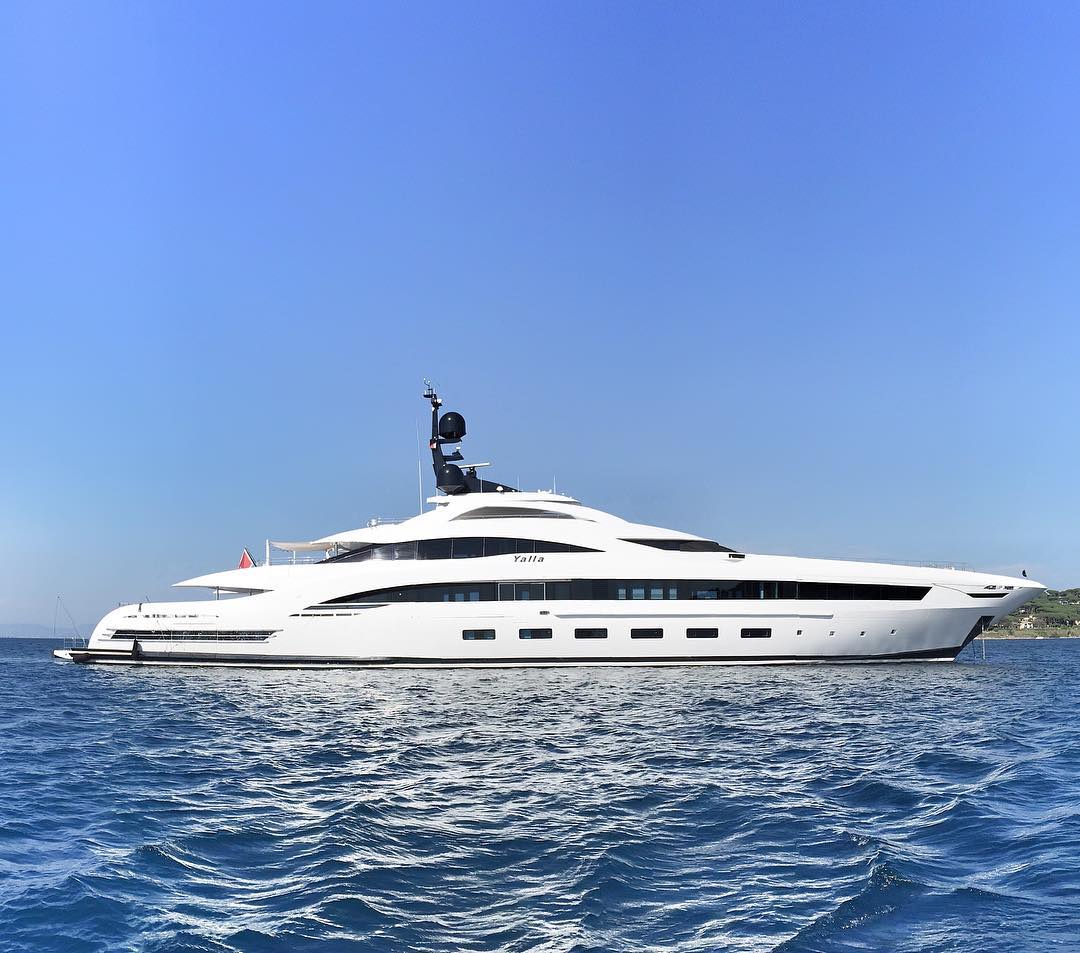 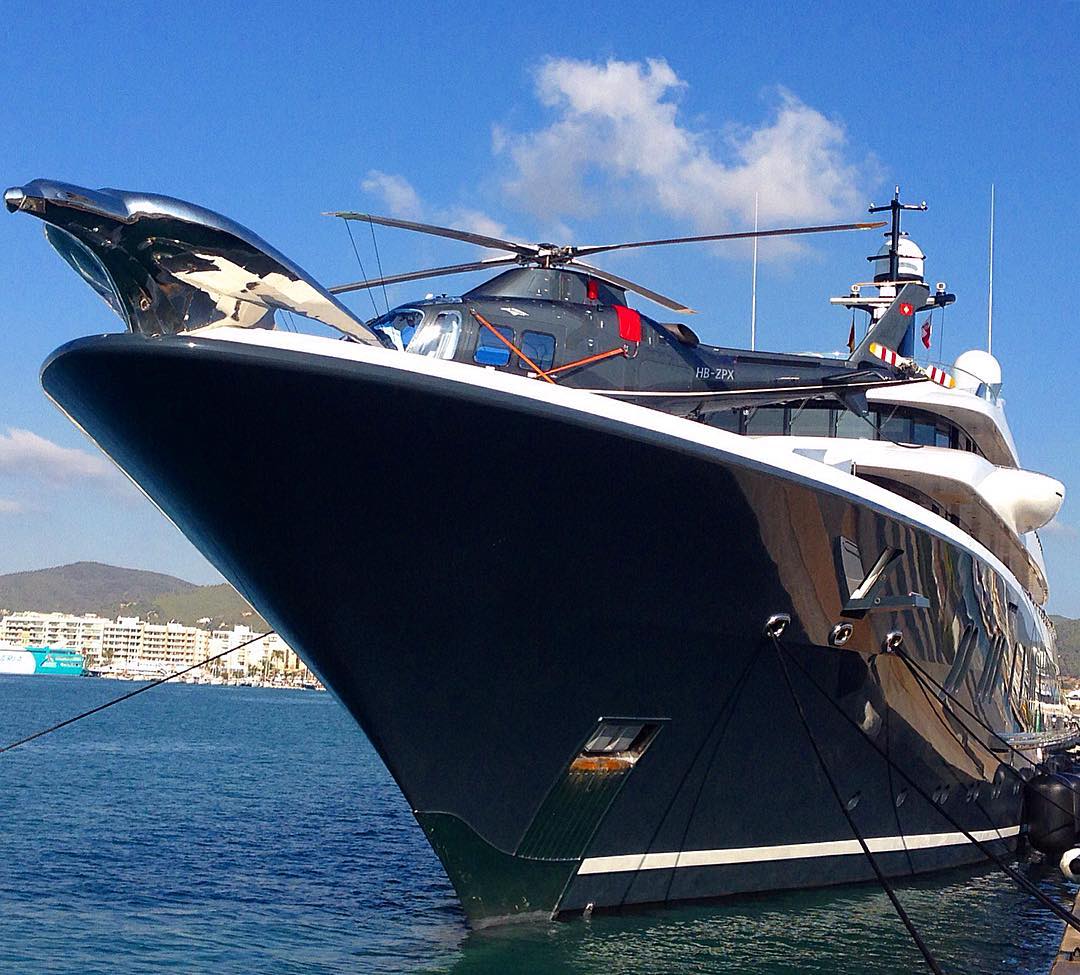 The superyacht was launched in 2010 by German shipbuilder Lurssen and last refitted in 2011. Phoenix 2 boasts interiors by Andrew Winch and offers elegant exterior lines, complemented by beautiful interiors and spacious socializing areas throughout. The most notable feature is definitely the giant sculpted phoenix figurehead that sits proudly on the prow of the vessel.
Solandge - @Yachts_La_Ciotat 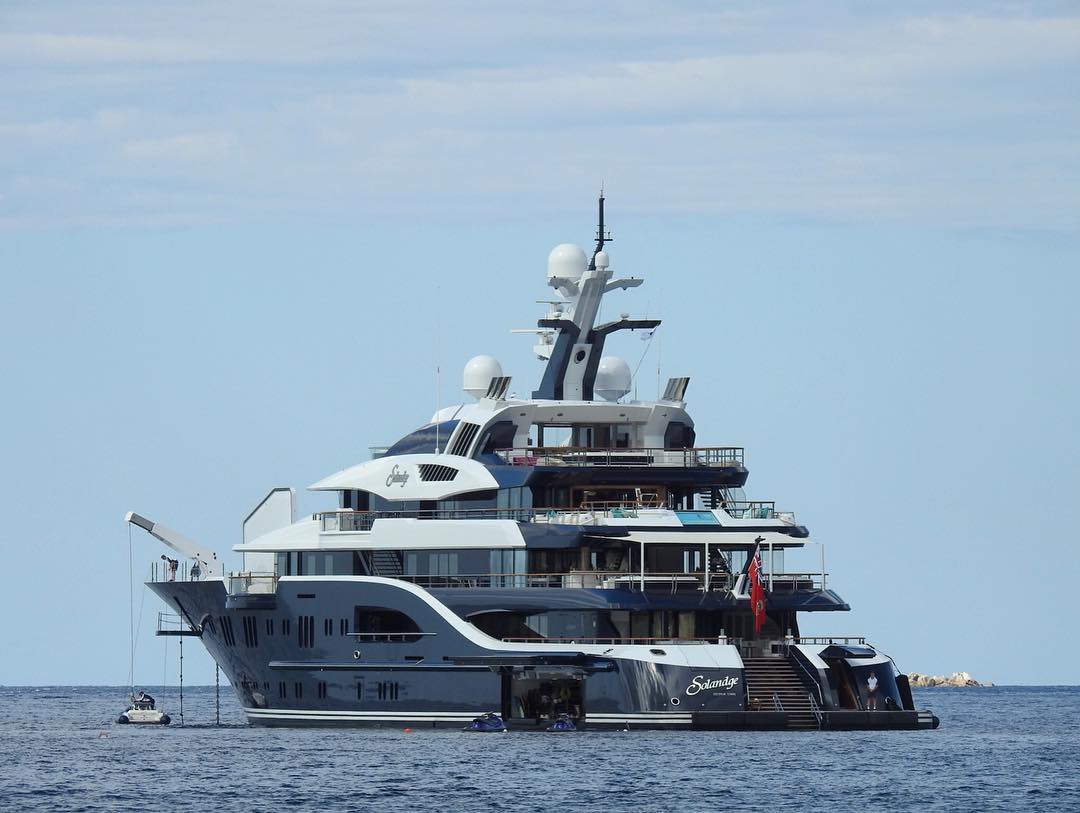 The 2013-built superyacht Solandge was launched at Lurssen. Her exterior design is the work of Espen Oeino, whilst Rodriguez Interiors and Dolker&Voges were responsible for the interior. The 85m superyacht boasts a number of unique areas to accommodate all needs, ranging from a large indoor movie theatre, to a vast main salon with bar, games room and seating areas. Solandge can sleep up to 12 guests in 7 staterooms, including a panoramic master deck featuring 180 degree windows, private dressing room, his and hers bathrooms and a private deck with spa pool.
Maryah - Julien Hubert 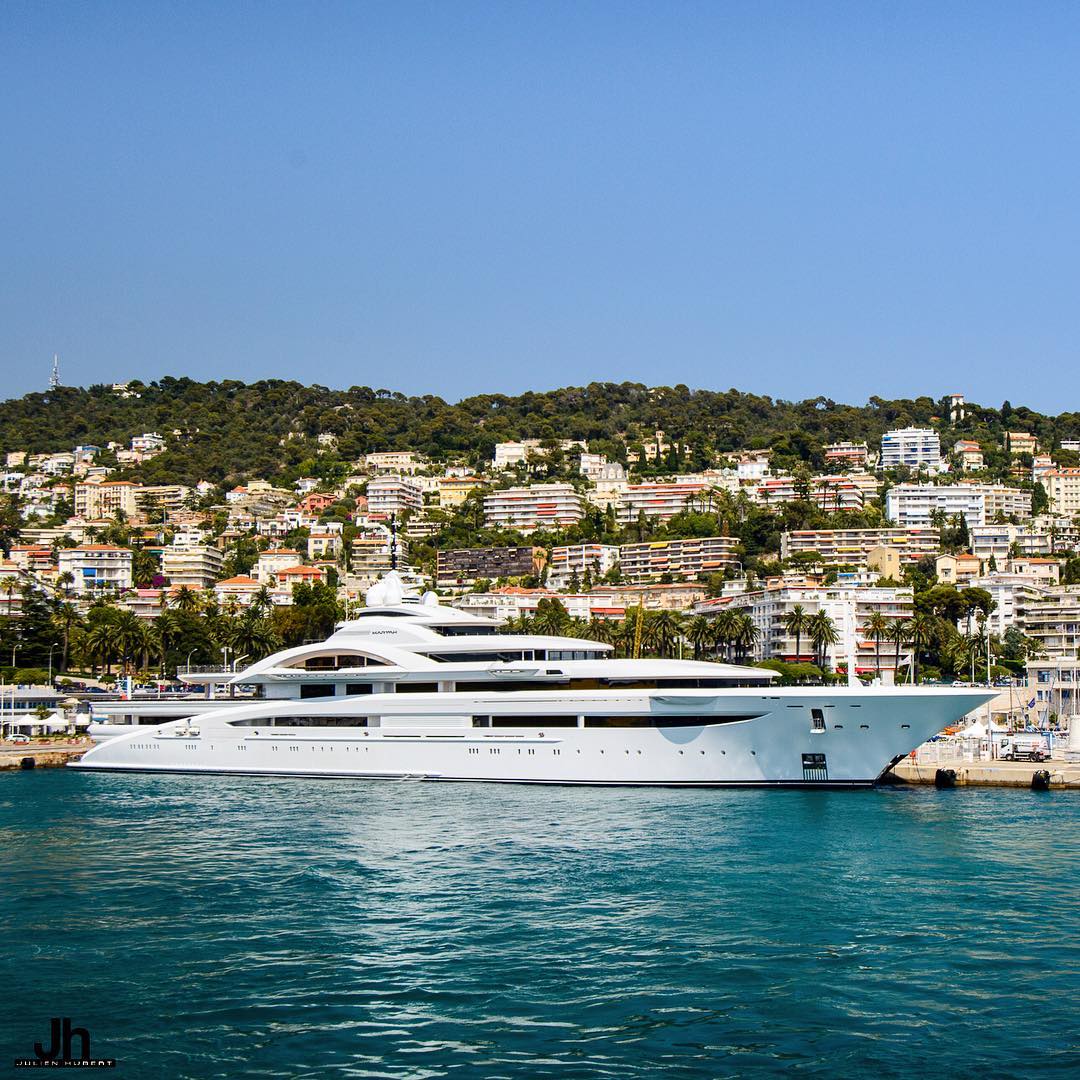 A former Russian research vessel launched in Poland in 1991, Maryah has been completely rebuilt at Elefsis Shipyards in Greece. H2 Yacht Design were responsible for her new design. 125m Maryah was built in 2014 making the yacht 2 years old. With a beam of 17.00m and a draft of 5.60m, she has a hull and superstructure. This adds up to a gross tonnage of 5650 tones. Powered by Catepillar engines of 2146hp each, the superyacht is capable of reaching a maximum speed of 18 knots and cruise at 15 knots.
Ace - @Lurssen 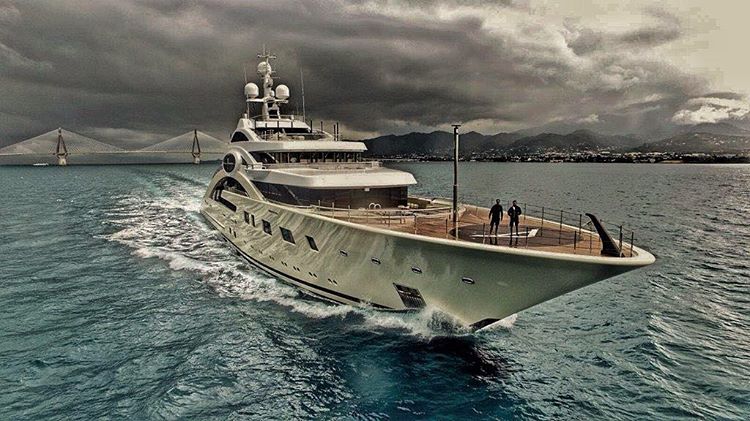 Formerly known as Project Rocky, Ace was built by Lurssen in 2012. With a beam of 13.80m and a draft of 4.00m, she has a steel hull and aluminium superstructure. This adds up to a gross tonnage of 2850 tones. The 87m superyacht can accommodate 12 guests in 6 cabins with an interior and exterior design by Andrew Winch.
Facebook
Twitter
Google+ 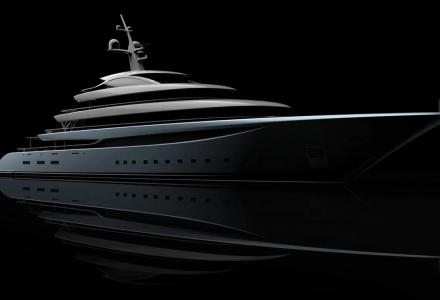 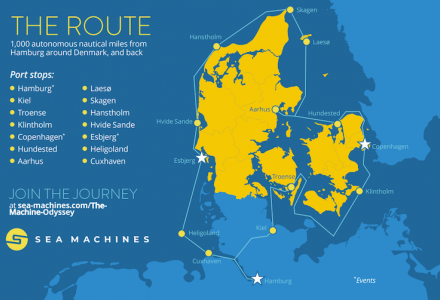 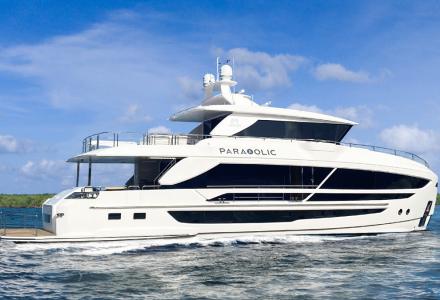 Horizon Launches Fifth FD80 Skyline
New FD80 Skyline by Horizon Yachts during construction to a first-time yacht owner.This latest FD80 will be named Parabolic and features an enclosed skylounge configuration with a full-beam master stateroom on the main deck and three guest cabins on the lower deck, with crew quarters for four and a beach club situated aft.Plentiful deck areas distinguish the FD80 from any competition, and the owner of Hull 5 customized the upper deck layout to accommodate two jet skis on the boat deck aft along with a six-person Jacuzzi with counter seating and a bar area. The foredeck is fitted with a large sunpad and U-shaped seating with dinettes for enjoying the view at anchor. A large dining table for eight occupies the main deck aft, while additional dining can be enjoyed at the convertible dining table in the main salon.Throughout the interior, light anegre wood with walnut highlights is complemented by expansive windows and a light ash flooring for a bright and airy feel. The main salon features a dayhead and seating area with an off-white leather sofa to port and a fold-down television, console and convertible dining table to starboard. The galley is situated forward to port and features privacy glass and a bar area with three stools.The master stateroom occupies the forwardmost area on the main deck, while two VIP en suites and a convertible twin comprise the lower deck accommodations. The anegre and walnut finish continues throughout these areas as well.On the topmost deck, the customized enclosed skylounge configuration houses the wheelhouse with twin helm chairs forward and an L-shaped seating area facing a pop-up television and storage just aft.The owner worked with Horizon’s in-house design team to select a bright and cheerful soft goods package in a theme inspired by the Ginko tree that adds pops of blue, green and coral red hues complemented by decorative forms representing the ocean, earth, passion and geometry, all of which are intended to represent life’s infinite cycle peppered with the unexpected.Parabolic will be on display at FLIBS October 27 – 31. Upon delivery, the owner plans to cruise the U.S. East Coast and Caribbean aboard his new yacht. Founded in 1987, Horizon Yachts has celebrated 30 years as one of the largest luxury yacht builders in the world as well as the number one builder in the Asia Pacific region. In the past three decades, Horizon has delivered over 855 luxury yachts, with more than 220 of these over 80 feet in length. Popular models ranging from 52 to 150 feet include motor yachts, superyachts, power catamarans, expedition yachts, and fast displacement motor yachts.Credits: Horizon Yachts
September 24, 2021 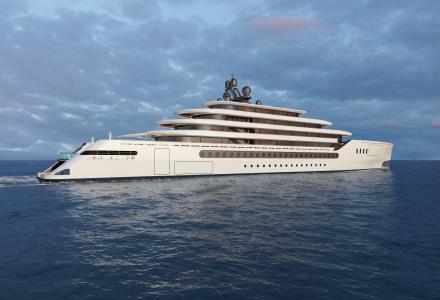 German Shipyard Meyer Group Establishes Meyer Yachts­
Meyer Group continues to work on realizing innovative ship concepts in new market segments: At the Monaco Yacht Show, the family-owned company will show for the first time a concept for a mega yacht under the Meyer Yachts brand powered entirely by fuel cells and batteries, named ONE 50. The Meyer Group is thus further diversifying its product portfolio. "Since 1795, we have built more than 700 ships in Papenburg alone. So our references can be seen on all the world's oceans. Now we are opening the next chapter in our history and entering the market for mega yachts. We have already received very positive feedback because we can realize almost limitless ideas and ship sizes - even the seemingly craziest ones. We are currently seeing that the demand for mega yachts is increasing and there is room for another shipyard in this segment," says Bernard Meyer. Large and complex ships are part of the Meyer Group's core competence. In the shipbuilding halls, which can be up to 504 meters long, ships with a length of almost 350 meters have been built almost exclusively for years. "Mega yachts are a new market segment that we can serve at all our three shipyards. At Meyer, it is always our ambition to position ourselves at the top - in environmental protection as well as now in yacht size. That's why the ONE 50 is just the beginning of our ideas and plans," says Thomas Weigend.150-meter yacht concept with fuel cells and battery systemAs the first model from Meyer Yachts, ONE 50 immediately shows what the new brand stands for - pioneering spirit, exceptional excellence and no limits. At 150 metres long and 20 metres wide, ONE 50 has an enormous volume of 15,000 gross tons. On six decks, the yacht for a maximum of 44 guests offers a spa on two levels, a cinema with an adjoining billiard salon, an entertainment area including a stage, an art gallery and a huge infinity pool at the stern. Fuel cells and battery banks are installed in the engine room to make ONE 50 as sustainable as possible. Electrically powered by 25 000 kilowatts, ONE 50 will reach a maximum speed of 23 knots. Building megayachts may become next Meyer success story"We see a lot of potential in mega yachts for new environmentally friendly technologies, which we also use directly in the ONE 50, for example the fuel cell for emission-free ship operation. We attach very great importance to this. In addition to the many competencies and skills we already have, we will also bring additional specialists from the yacht building industry into our team and strengthen the Meyer Group," says Malte Poelmann.Bernard MeyerMega yachts have the potential to become the next Meyer success story and thus also secure employment at all locations. "We are experts in building special ships, we have proven that many times. Now we are working on making mega yachts even bigger and, above all, greener," says Bernard Meyer.
September 24, 2021 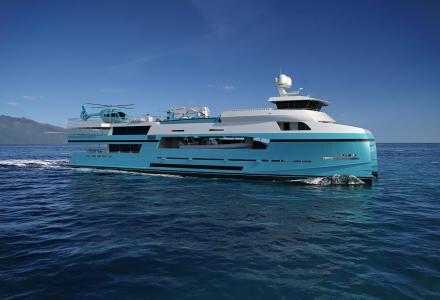 New 48m Catamaran Support Vessel My Bro is Under Construction
72-meter motor yacht Axioma is one of the most popular and successful charter boats on the market since her launch in 2013. She comfortably sleeps 12 guests but is often in demand among larger parties who wish to bring extra guests, be it more children, grandchildren, or friends. This left the owner with two options, to either build a larger boat or to create a support vessel that provides further accommodation.The Axioma and YPI team are delighted to announce that a new 48m (157.5ft) catamaran support vessel, My Bro is now in build, with delivery expected in 2023. Dunya Yachts are building the vessel and the project is a result of a new design and technical collaboration with industry expert Gregory C. Marshall Naval Architecture. The stylish yacht combines class-leading function in layout, engineering, performance, stability, and safety features. A unique beam ratio allows twice the capacity of any competition in the market at the same range. My Bro will be capable of reaching a speed of 18 knots. My Bro will operate alongside Axioma and carry an additional ten guests in five cabins, offering the same level of comfort and leisure as they would expect from a mega yacht. They will have use of their own dedicated main saloon, gym, spa, Jacuzzi and swim platform, and enjoy a non-stop water sports regime. Alongside an array of toys and tenders, My Bro will also carry a mini submarine. An additional stand-out feature of My Bro will be a touch-and-go helipad which has been designed for multi-purpose use, capable of transforming into an outdoor disco, open air cinema, basketball court, tennis court, yoga space or entertainment area suitable for a wide range of events.The multi-role vessel is also suitable for solo adventure-based charter operations or as a dedicated fleet support vessel to Axioma yacht.Credits: Yachting Partners International
September 24, 2021
All news