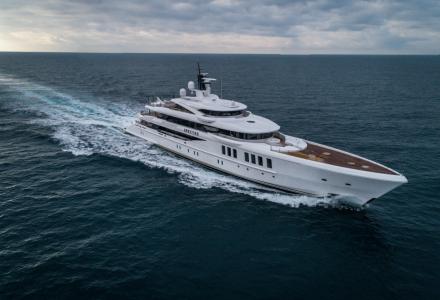 Recommended articles : Serial yacht owners: Spectre; Inside John Staluppi's Bond themed superyacht fleet; 69-metre superyacht Spectre built for John Staluppi, with a passion for James Bond, speed and technology.
Benetti - the Italian yacht builder, delivered 69-meter fully-customized superyacht Spectre to John Staluppi on November 19. They held an exclusive ceremony at their Livorno shipyard.
It took 750,000 working hours to build this steel-hulled yacht with aluminium superstructure, pool and "touch ang go" helipad, which  is the third Benetti superyacht built for the Staluppi in less than ten years. John and Jeanette Staluppi are experienced owners who adore James Bond filmography, 50s and 60s sports car adrenaline excitement, and the Made in Italy ethos. Staluppi’s wish was to feel the same emotions on board the new superyacht as they did in a motorcar on the racetrack. The main challenge for Giorgio M. Cassetta, who designed the exterior lines, was to create an extremely dynamic yacht with huge volumes. The result is a very “traditional” vessel with a long and sharp bow and extended superstructure volumes that slide towards stern. 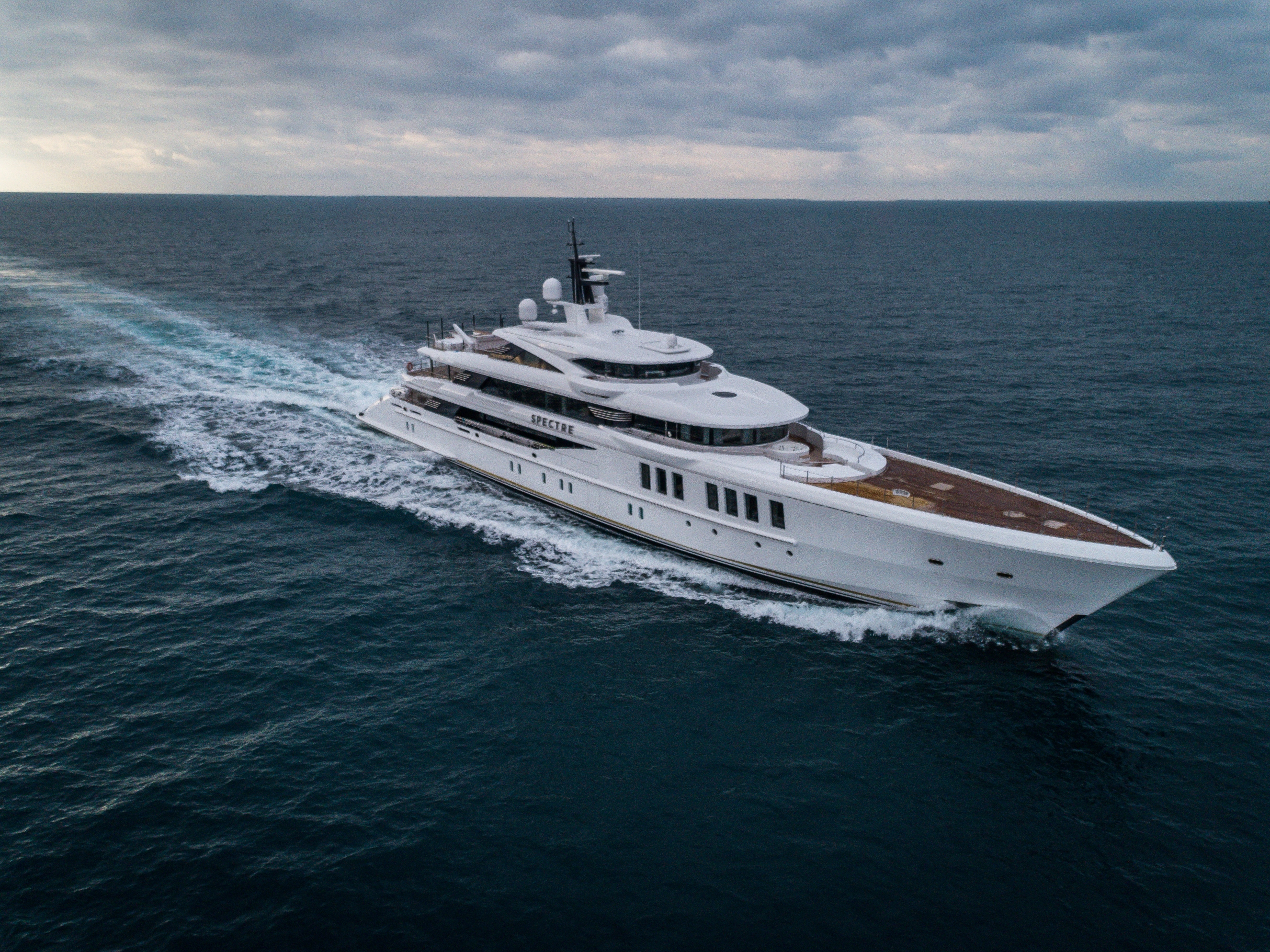 The strongly sporty appearance was achieved by the volume and proportion fluidity. All of which contribute to making Spectre a yacht equal in performance to an aluminium yachts. The contribution and support of the Dutch firm Mulder Design, which was responsible for the structural design, the hull and the propulsion system, was hugely important in this achievement. Due to many clever measures the weight of the yacht has been reduced considerably. The performance, of what Frank Mulder, founder of the eponymous studio, has baptized as the "High Speed Cruising Hull", is incredible. 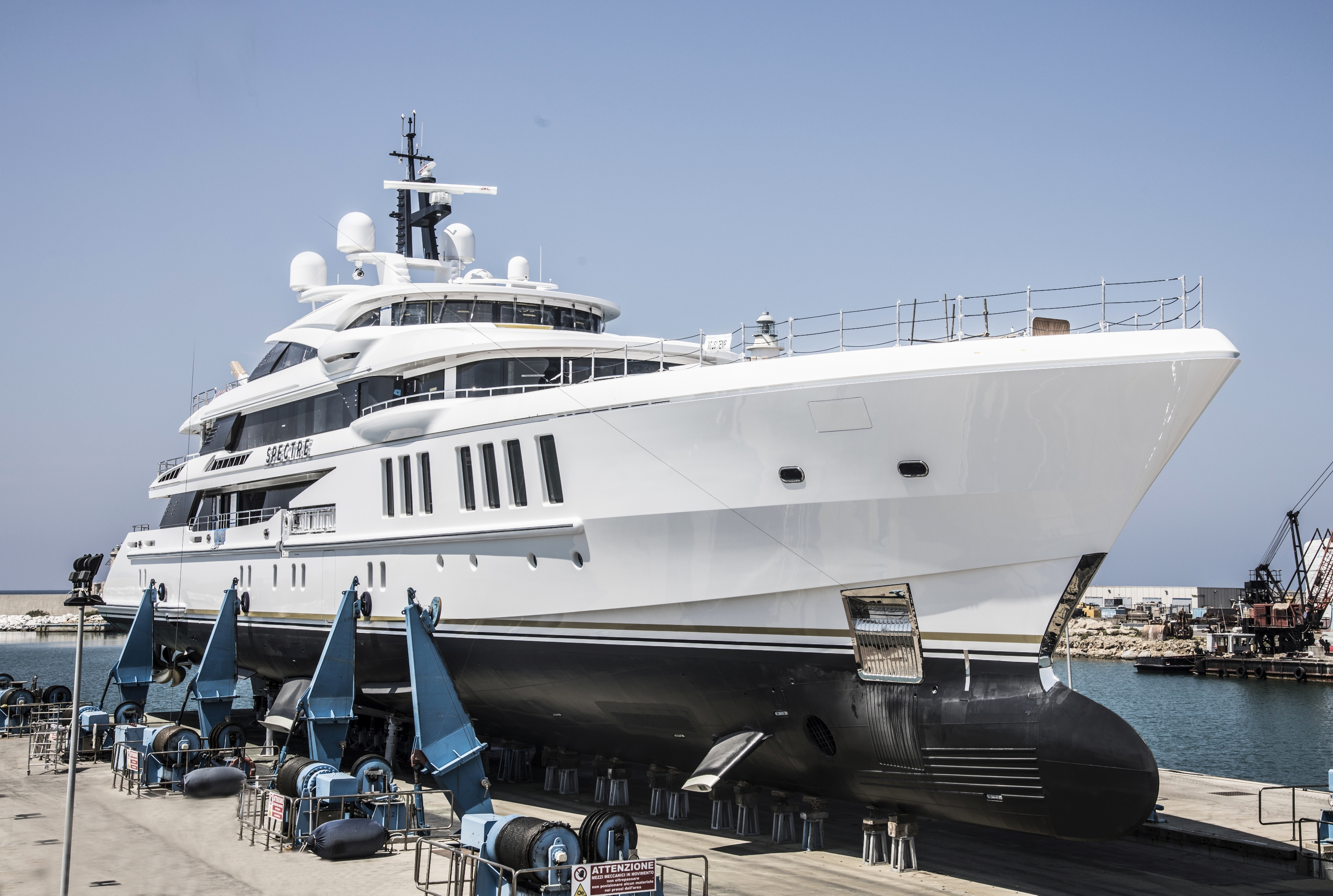 The maximum speed is 21.2  knots, 30% higher than a traditional displacement hull and the autonomy is equal to 6,500 nautical miles at the considerable speed of 12 knots. Spectre also features Naiad Dynamics Total Ride Control technology, installed for the first time on a yacht of this type. Originally developed by Naiad for commercial and naval ships, thanks to the collaboration with Mulder Design, this technology was later configured to be installed on board Spectre. The active system ensures a significant increase in navigation stability and improved on-board comfort thanks to two roll stabilizing fins, two forward pitch control canards and three independently controlled stern interceptor blades. 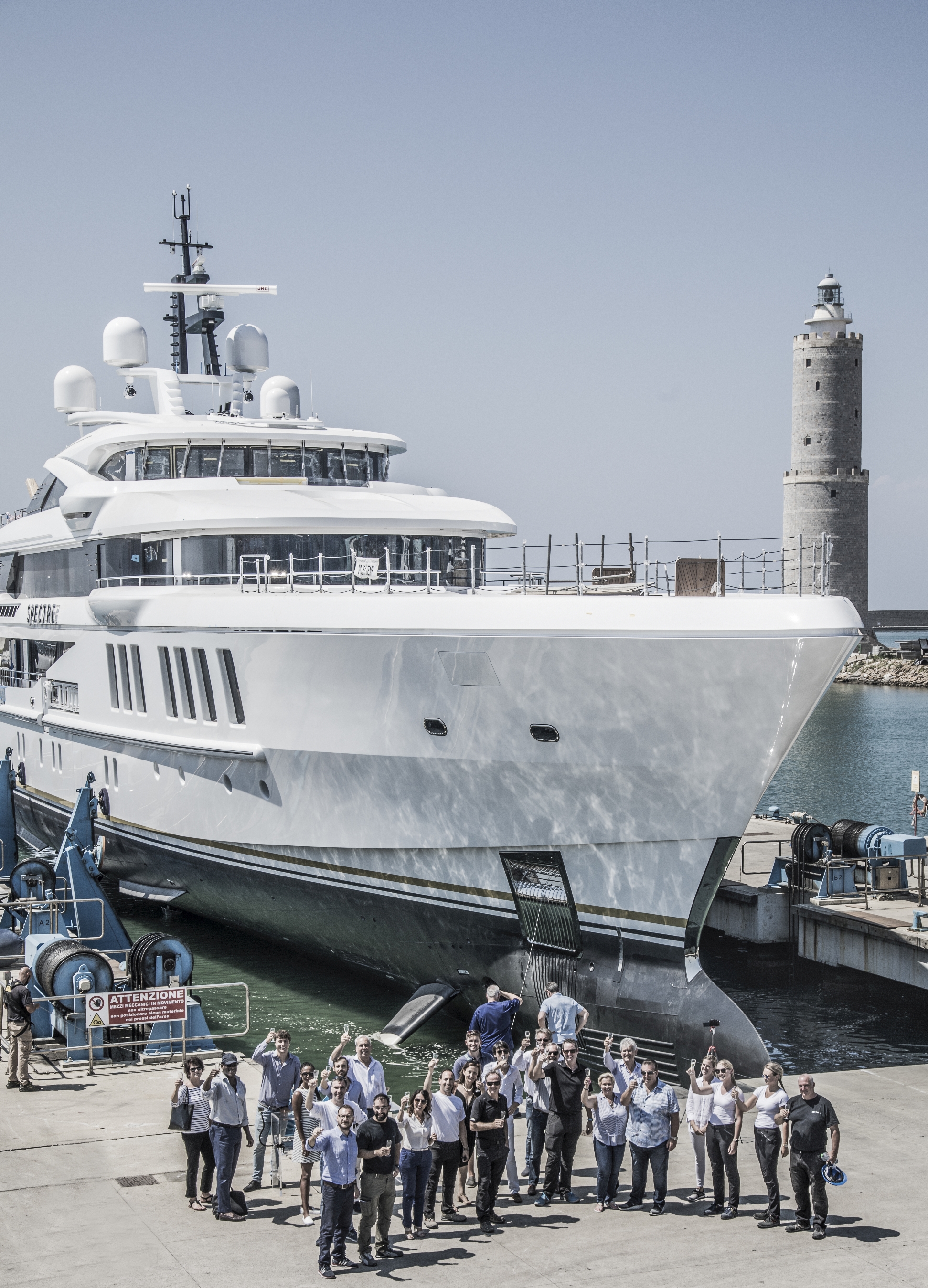 The interior layout is modern and has been created by the Benetti Interior Style Department, while the owners took an active role in selecting some particular furniture. The whole atmosphere on board is a homage to the traditional late-‘800 Liberty French hotels and boutiques. On the Main Deck, for example, the main salon floor takes inspiration from that of a Parisian Deco style resort, enriched with modern touches thanks to the choice of Armani fabrics, chosen by the owner. Other references to French taste are represented by the designs of the carpet and, especially, the windows, which reference those of the most characteristic Liberty shops in Paris. 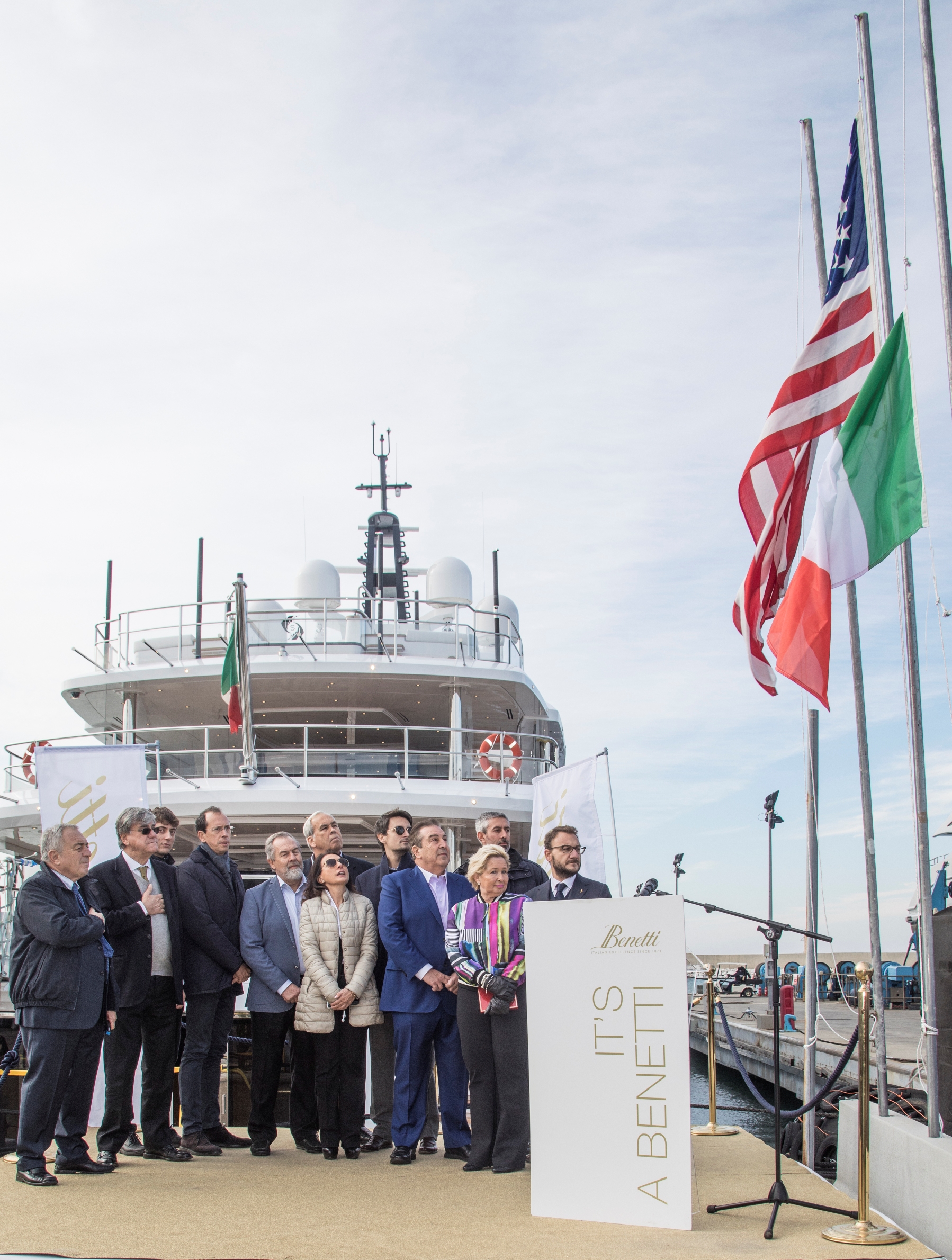 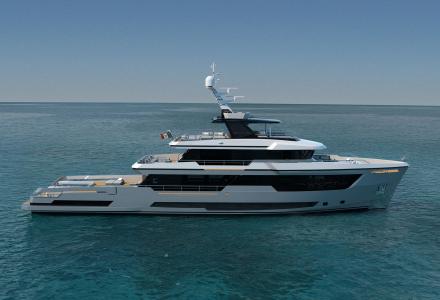 Columbus Crossover 40 Hull Under Construction at Palumbo Superyachts Savona
Columbus Yacht confirms that the construction of the steel hull for the first 40-meter Crossover unit has started at its Savona shipyard. The modern and muscular exterior lines are by Hydro Tec, while the interior design is penned by Francesco Guida.The new Columbus Crossover 40 project stems from the need of housing large tenders on compact yachts, and at the same time endorses the new lifestyle regarding a boat as a private island on which to concentrate all the holiday activities. The steel displacement hull has bulbous bow, flat and flared aft sections and light alloy superstructure. The interior will be modern and inspired by the theme of exploration. The layout includes four cabins on the lower deck (three VIP and one with double beds) and a full beam owner's suite on the main deck.This boat can house a tender up to 8 meters in length and 2.5 tons in weight on deck, as well as the whole series of “toys” usually supplied to this type of yacht.Two Caterpillar C 32 of 970 kW each will allow it to run at a maximum speed of over 14.5 knots. Fuelled by tanks of 60m³ approximate capacity, at economic speed this boat will reach a 4,000 mile range.The yacht is equipped with two pairs of stabilizers ensuring optimal performance both at anchor and underway.The project is on sale with delivery scheduled for spring 2024.Columbus Yachts was established in 2008. In early 2019, the shipyard launched the new flagship Columbus Classic 80m M/Y Dragon which joins in the Columbus star-studded fleet with the award-winning Sport Hybrid 40 Divine, the 57m M/Y Taiba and the 40m M/Y Eleonora III. The Columbus range offers four different lines: Sport, Classic, Crossover and Custom for unique projects. Currently, Palumbo Superyachts comprises a representative office in Monaco and a logistics network of five shipyards in the Mediterranean (Ancona, Malta, Marseille, Naples and Savona), operating under just as many world-renowned brand names: ISA Yachts, Columbus Yachts, Mondomarine, Extra Yachts and Palumbo SY Refit.Credits: Columbus Yachts
May 26, 2022 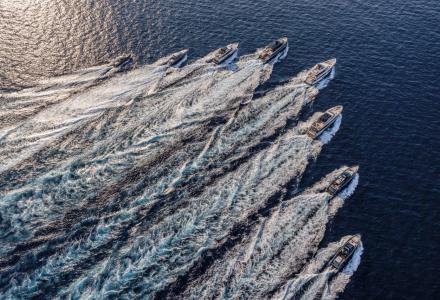 Ferretti Group to Attend Venice Boat Show With a Fleet of 10 Yachts
In the splendid setting of the city’s Arsenale area, the Group confirms its peerless reputation for beauty and innovation with a fleet of 10 magnificent yachts. At the Venice Boat Show, which will be held from May 28 to June 5, Ferretti Group will be taking a fleet of 10 boats to the event set in the fascinating location of the city’s Arsenale area. The highpoint of the Group’s presence at the show is the wallypower58. “The Venice Boat Show is a dream destination for every yachting enthusiast: who wouldn’t want to admire the world’s most beautiful boats in its most beautiful city?” commented Alberto Galassi, Ferretti Group CEO. “It is an absolute delight to present the Ferretti Group fleet in a unique setting like the Arsenale, suspended magically between heritage and modernity. This is where the groundbreaking wallypower58 will make its world debut, a masterpiece of design and innovation that marks the start of a new era for the extraordinary Wally range. Also on display will be magnificent models from the Riva, Pershing, Custom Line and Ferretti Yachts brands, including spectacular flagship Ferretti Yachts 1000. Our sincere thanks go to the city’s Mayor Luigi Brugnaro and the municipal administration, which has once again demonstrated unparalleled efficiency and organizational capacity. The Venice Boat Show is an increasingly strategic event that has established its position as the most important show in the entire eastern Mediterranean.”wallypower58The Ferretti Group, led by Chief Executive Officer Alberto Galassi, is now one of the world’s leaders in the construction and sale of luxury yachts and pleasure vessels, with a unique portfolio of brands: Ferretti Yachts, Riva, Pershing, Itama, Mochi Craft, CRN, Custom Line and Wally.Credits: Ferretti Group
May 26, 2022 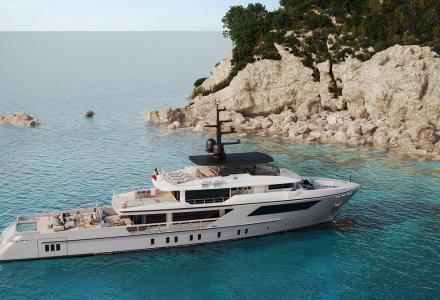 Ninth Unit of 500Exp Launched by Sanlorenzo
Sanlorenzo has launched the ninth unit of the 500Exp line, two months ahead of the production schedule and customer agreements, marking another ambitious milestone for the Superyacht Division. With this vessel being delivered to its owner in July and the tenth and eleventh units currently under construction, Sanlorenzo reconfirms its leadership in the Explorer market.Attention to detail, a marked emphasis on the liveability of spaces and the advanced technology employed in all the models are the keys to the success of the 500Exp line, evolution of the 460Exp and emblem of Sanlorenzo's sartorial production capacity.The model offers accommodation for 12 guests in six cabins and for nine crew members in five cabins. The 500Exp features an exterior design by Francesco Paszkowski. The lower deck houses a beach club with a bar which, thanks to the opening and folding hatch, becomes another terrace overlooking the sea that can be transformed into a garage to accommodate tenders up to seven meters long. Sanlorenzo was founded in 1985 in Viareggio by yacht builder Gionvanni Jannetti. In 2005, Massimo Perrotti became the majority shareholder in the shipyard. Sanlorenzo builds yachts ranging from 28.60 to 62 meters in length. Credits: Sanlorenzo
May 26, 2022 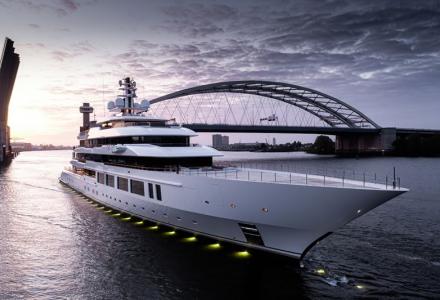 117m Infinity Delivered by Oceanco
Oceanco has announced the delivery of the 117m megayacht Infinity. Her recognizable exterior was made by Espen Oeino International and her contemporary interior was penned by Sinot Yacht Architecture & Design and David Kleinberg Design Associates. She is Oceanco’s largest motoryacht to date and the largest yacht ever built in the Netherlands.The seven-deck yacht has elegant interior and exterior spaces, accommodations for up to 16 guests and includes an extensive wellness area with spa, sauna, gym, and yoga studio.The yacht boasts best in class crew areas, mechanical systems and technology and an unprecedented level of onboard comfort with a particular emphasis on low noise and vibration levels. Following an exhaustive development and engineering process, the hull and active stabilization has been intelligently optimized to deliver the next generation in both seakeeping and hydrodynamic efficiency.“She is the result of impressive teamwork from the owner’s team, Espen Oeino, Sinot Yacht Architecture & Design, David Kleinberg Design Associates, Lateral Naval Architects, and all Oceanco’s co-makers and strategic partners. She represents the true power of co-makership that is central to all our projects,” says Marcel Onkenhout, Oceanco CEO. Oceanco was founded in 1987. Right now it is a world-class builder of custom superyachts up to the 140 meters range. Oceanco works with world-known designers such as Terence Disdale, Nuvolari-Lenard, Espen Oeino, Sam Sorgiovanni, Igor Lobanov, Tim Heywood and Andrew Winch to create some of the timeless and award-winning yachts afloat today.Credits: Oceanco
May 25, 2022 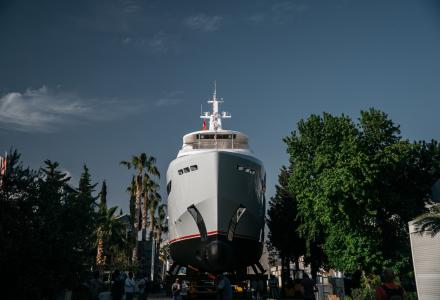 44m B145 Launched by Bering Yachts
Bering Yachts has launched the first flagship yacht B145 Heeus. The first hull of the 44-meter expedition yacht was launched at the Bering Yachts shipyard in Antalya, Turkey.Bering 145 is made in a steel hull and with an aluminum superstructure. The expedition yacht was designed and built by Bering Yachts' team of in-house engineers and naval architects. With a length of 44.20 meters and a gross tonnage of 499 GT, this superyacht is ideal for long-distance autonomous cruising.“We are very proud that the first hull in the Bering 145 range has been successfully launched. This marked the beginning of a new chapter for Bering Yachts,” says Alexei Mikhailov, founder and director of Bering Yachts.Heeus is capable of accommodating up to 12 guests and embarking on unforgettable journeys around the world with the help of 10 crew members. She has a well-thought-out 6-cabin layout and a multifunctional flybridge with a hot tub and an equipped bar area. The master cabin is located on the main deck at the bow of the yacht. The cabin is framed by over 9.5 sq. m of glass windows. On the main deck there is a spacious salon with a dining area for 12 people and a seating area with upholstered furniture. Another dining table is located on the upper deck, in the sky lounge. On board Heeus there is also a spacious beach club and a garage area of ​​over 25 sq. m.The yacht is equipped with two Caterpillar C32 ACERT engines with a capacity of 1200 hp. at 1800-2100 rpm (engines with adjustable operating speed range), the maximum speed of the yacht is 15 knots, and the cruising speed is 12 knots. The superyacht is equipped with a hybrid propulsion system. The B145 has an impressive fuel capacity of 95,600 liters. An autonomous cruising range of over 5,000 nautical miles allows its owners to reach any destination without discomfort.Bering Yachts is located in Antalya, Turkey. Its shipyard designs and builds semi-custom steel expedition yachts and luxury steel trawler yachts ranging in size from 50 to 145 feet. Credits: Bering Yachts
May 25, 2022
All news