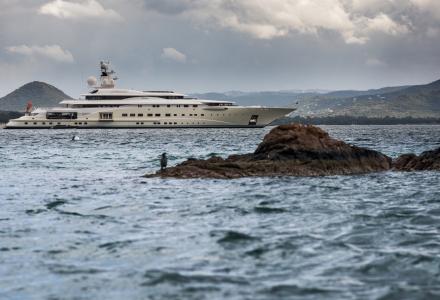 Pelorus, the 115-meter superyacht built in 2003 by Lurssen, has reportedly been sold to Chinese billionaire, Samuel Tak Lee according to several sources in the industry. 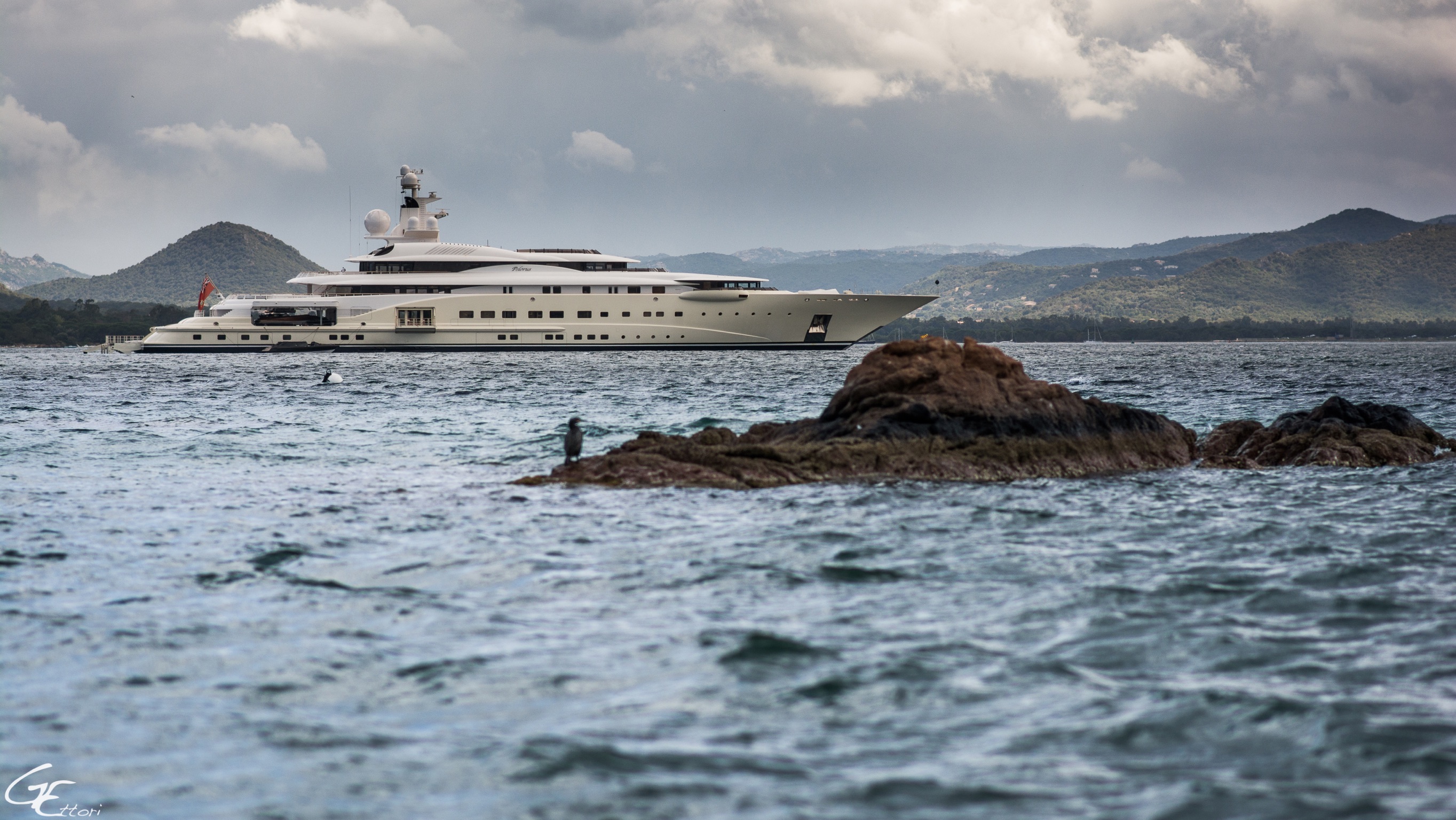 Built for the Saudi owner of 72m Coral Island, Pelorus was the 11th largest yacht in the world at the time of her launch and became Lurssen's newest flagship. A few months after delivery, the owner decided however to sell his masterpiece and it was Russian billionaire, Roman Abramovich who came in with the highest bid to acquire the superyacht. 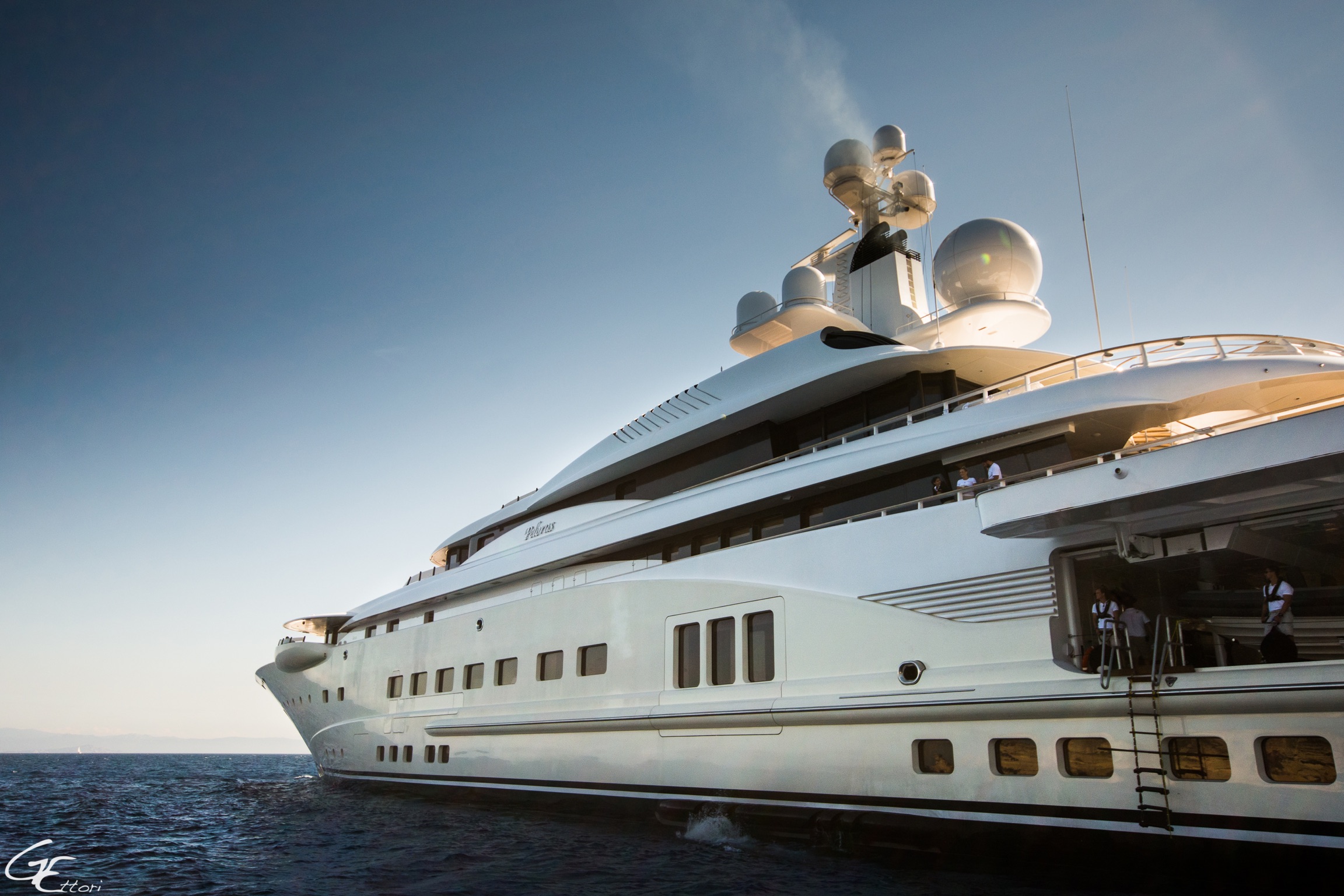 Following Pelorus' change in ownership, she was refitted with a second helipad being added on her bow. The yacht then remained a part of "Abramovich's Navy" for several years until Abramovich's divorce with his wife in 2007. Pelorus was then primarily used by his ex-wife until the yacht was eventually sold in May 2011 to Dreamworks co-founder, David Geffen. 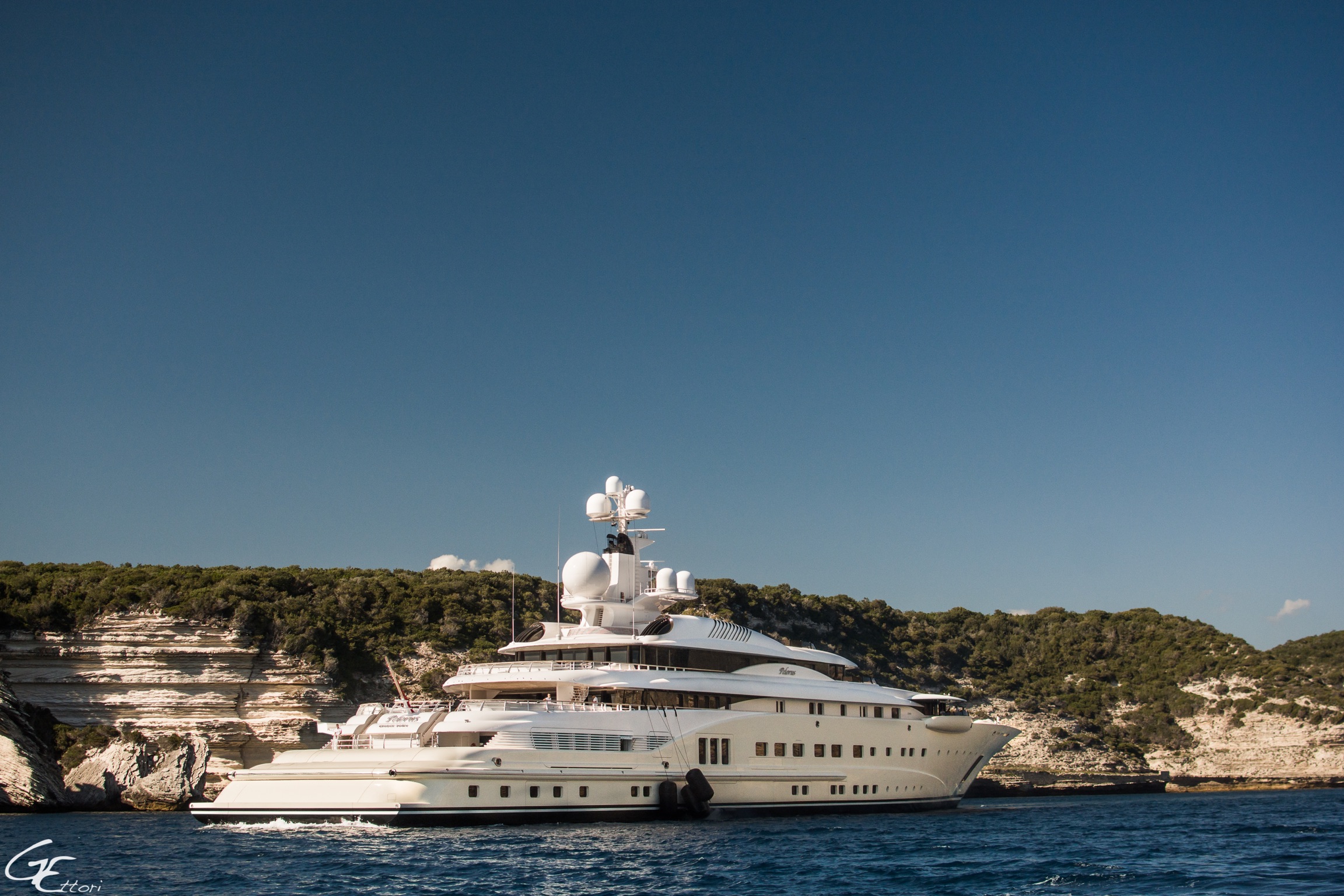 The media mogul however did not hold on to the yacht for long as the Rising Sun owner sold the yacht to the Royal Family of Abu Dhabi later in 2011 for €214,000,000 as became known following the Panama Papers leaks. 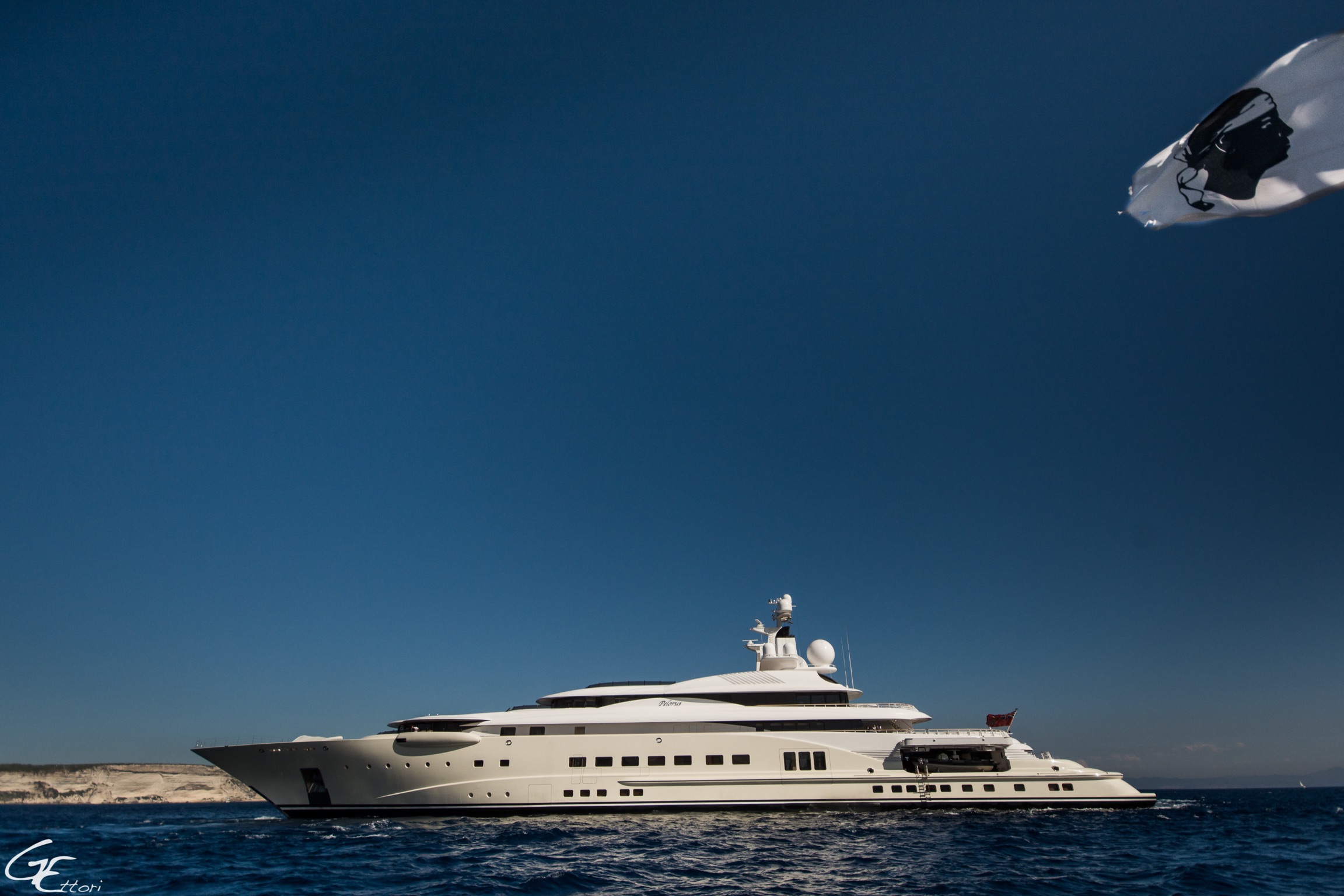 The latest chapter in Pelorus' history was recently written when Chinese billionaire, Samuel Tak Lee acquired the 115-meter megayacht. With a net worth valued at $2.9 billion by Forbes, the real-estate tycoon has been using Pelorus for a large part of the summer according to several sources. Earlier in August, his son, Jimmy Lee, threw a party on board Pelorus with David Guetta and MC Hammer performing. 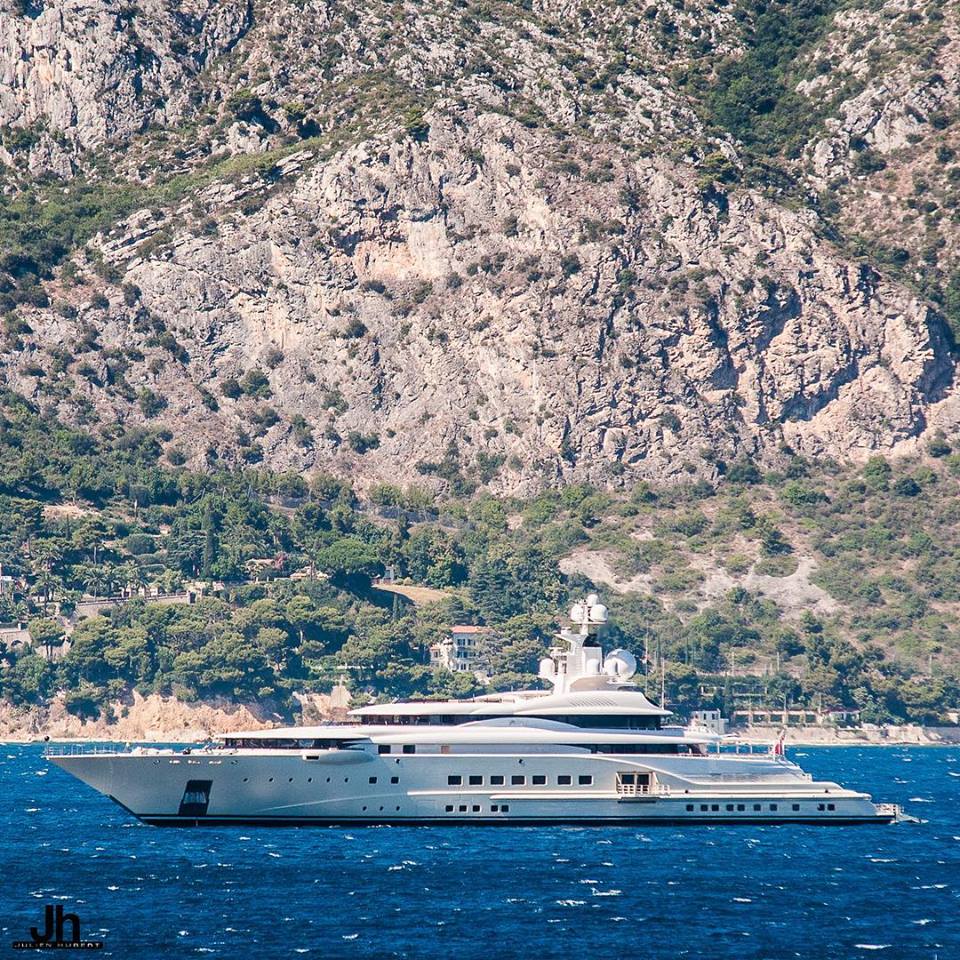 With an exterior by Tim Heywood and an interior by Terence Disdale, Pelorus can accommodate 18 guests in 9 cabins. Performance wise, the superyacht is powered by twin Wartsila engines giving her a maximum speed of 20 knots and allowing her to cruise at 12 knots for up to 6,000 nautical miles. Pelorus will now reportedly be due for a refit at the end of the season.
Photos by Guillaume Ettori and Julien Hubert
Facebook
Twitter
Google+ 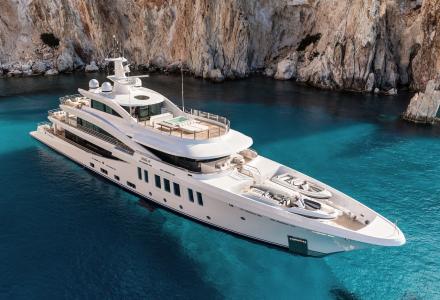 Picture of the Day: 60m Stella M in Greece
The 60m Amels 200 Stella M has been cruising around Greece. The shipyard has shared the pictures of the yacht on its social media pages. Stella M is the first yacht to be delivered from the Amels 200 Limited Editions design. She features custom interiors by Reymond Langton. Her exterior is an evolution of the Amels 188 designed by Tim Heywood. He explains how the originality and ingenuity of her exterior allow her to stand out from other yachts of this size. Like her predecessor, the high volume (1,015 GT) Amels 200 features hybrid electrical power technology, a four-deck elevator and air-conditioned gym on the sun deck. Her additional length has allowed for a number of enhancements such as larger aft decks and swim platform and full-height windows in the owners suite.Damen Yachting, a division within the Damen Shipyards Group, was created in 2019. The division combines the pedigree and heritage of Amels yachts with a growing portfolio of SeaXplorer yachts and Yacht Support vessels. Credits: Amels Facebook / @breedmediacreative
October 19, 2021 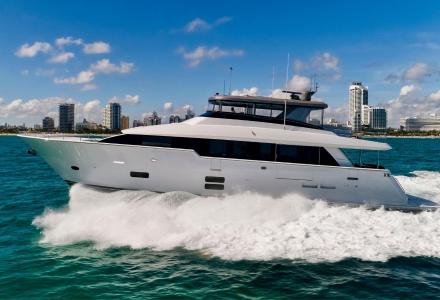 28m SnowGhost Sold by Denison Yachting
SnowGhost, a 90′ Hatteras, was sold by Denison Yachting’s Peter Quintal who represented the seller. Raul Faget with Florida Yachts International introduced the buyer. The 27.95m SnowGhost is the next generation motor yacht from Hatteras Yachts.The yacht was launched in 2018. The M90 Panacera series is featured in several Yachting articles and even received 2018 "Best of the Best Award". She’s a stunning open concept yacht with a light-filled interior that strikes a perfect balance between form and function. SnowGhost fully loaded thanks to over $2 million in extra options and custom features, including a climate-controlled hardtop and outdoor, beach club-style spaces. This is a fully loaded yacht featuring a huge hard top with climate control. The outdoor beach club style spaces with sail shades on the upper aft deck and bow area are amazing for entertaining large groups. The CAT 360 joystick docking system makes her easy to maneuver around the docks and has GPS position hold. This M90 Pancera model incorporates a range of global design influences to create innovative use of living, dining, and entertaining areas. Large, frameless windows on the main deck bring in plenty of natural light to create a sense of spaciousness throughout the salon. The lower deck can accommodate up to eight guests in four cabins, each with ensuite bathrooms.<iframe width=560 height=315 src=https://www.youtube.com/embed/7fkH-yj5Fkw title=YouTube video player frameborder=0 allow=accelerometer; autoplay; clipboard-write; encrypted-media; gyroscope; picture-in-picture allowfullscreen></iframe>Her last known asking price was $8,499,000.Credits: Denison Yachting
October 19, 2021 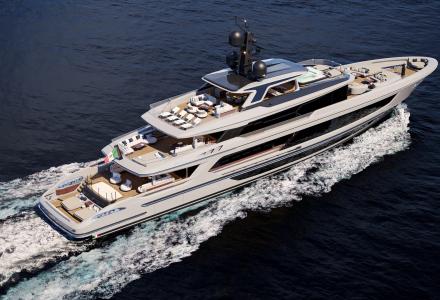 Third Hull of T52 Sold by Baglietto
The Italian-based shipyard Baglietto has shared the information about the sale of the third 52m T52 superyacht series. The second hull of the series was sold in July 2021. The new 52m exterior is made by Francesco Paszkowski Design and the interiors are penned by Studio Vafiadis.T52 is a displacement line of motor yachts just below 500 GT and can be characterized by significant design innovations both forward and aft. The third hull also will have a three level beach club on three different levels, a 24m sundeck and a sky lounge that opens on three sides, which is a typical characteristic of Baglietto, definitely a space above any yacht of similar size and volume.This is the seventh order for the shipyard this year with the 13 hulls currently under construction by the Italian shipyard. Baglietto Spa is an Italian boat builder based in La Spezia and specializes in the construction of new aluminum light alloy yachts ranging between 35m and 50m in length and steel and light aluminum alloy displacement mega-yachts starting 40m.Credits: Baglietto
October 19, 2021 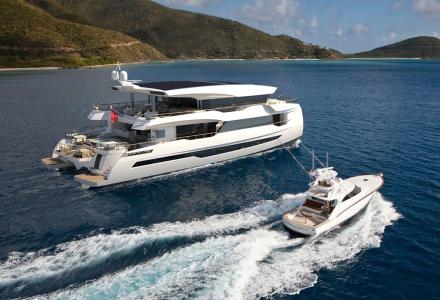 Silent-Yachts Sold Zero Emission Silent 100 Explorer
After unveiling a new flagship model, the Silent 100 Explorer, at the 2021 Cannes Yachting Festival, Austrian shipyard Silent-Yachts has sold the first unit with a scheduled delivery in 2023. “This new sale is coming after the sale of three of our 80-foot models in rapid succession and confirms the market’s interest in the superior comfort of catamarans and solar energy for propulsion needs, as well as all the household appliances on board,” says Silent-Yachts founder and CEO, Michael Köhler.Michael KöhlerThe yacht measures 31 metres overall (101.7ft) with a beam of 13,62 metres (44.7ft) and a spectacular height of 10,46 metres (34,3ft). Renewable electric energy comes from an array of solar panels in the hardtop that slides apart to reveal a sundeck that can also serve as a touch-and-go helipad. Compared to the previous flagship, the Silent 80, the new Silent 100 Explorer has an extra deck and much more space both outdoors and indoors. “The Silent 100 Explorer is a great challenge proving that the solar revolution of Silent-Yachts to the superyacht level,” said designer Marco Casali. “The kind of available spaces, fully customizable from the clients, will allow unique internal and external spaces not even achievable on much bigger superyachts like owner's quarters or large saloons. The Silent 100 Explorer will bring the experience of cruising to a next level becoming a world reference for a responsible yachting always connected to the respect of the environment.”Marco CasaliThe solar cells provide up to 40kWp (kWp stands for kilowatt 'peak' power output of a system) and clean solar electrical energy is stored in a battery bank with a capacity of up to 800 kWh. Coupled to twin 340kW (@700 rpm) electric motors, the Silent 100 Explorer has an economic speed of 6-8 knots, a cruising speed of 10 knots and a top speed of 14-16 knots. Two or three diesel generators, depending on the specification requested, provide back-up auxiliary power. Because the solar energy is completely renewable, in theory the Silent 100 Explorer has unlimited range, similar to all other Silent models.“The sheer amount of family-friendly space aboard the Silent 100 Explorer has to be experienced to be believed,” says Michael Köhler. “It also means that clients are free to customise the arrangement according to personal preference. Do you want a gym or media room, a larger VIP suite or a country kitchen on main deck? No problem. The flexibility of the catamaran configuration means we can meet most requests.”Credits: Silent-Yachts
October 18, 2021 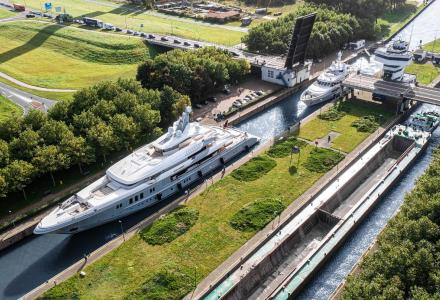 Feadship Welcomed Back Home Gitana, Mogambo and Najiba for Refits
The Feadship welcomed back the 48m Gitana and the 74m Mogambo, which arrived at the Dutch yard facility in Makkum for a refit. In a huge milestone for the Refit & Services programme that Feadship officially began offering in 2018, ten yachts are arriving in the Netherlands for a winter season of refurbishments, upgrades and renovations at the four Feadship yards. Access to De Voogt’s engineering staff is also a great plus for owners wanting to implement new technology in order to modernise their yachts.The 58m Najiba and 44.6m Harle also returned to the shipyard for a Feadship refit. They were sailing in single file, until the split where Harle continued en route to the yard at Kaag and Najiba took the turn to the yard in Aalsmeer. “We are absolutely delighted to welcome back these two lovely Feadships and their amazing captains and crew. In these unprecedented times of travel restrictions and market capacity limitations, where better to spend the winter than back with the Feadship family?" says Pier Posthuma de Boer, Refit and Services Director at Feadship Facebook page.Feadship was formed as a group in 1949 as a marketing partnership between six Dutch shipyards, de Vries Lentch, Van de Stadt, Witsen & Vis, Akerboom, De Vries Scheepsbouw and Van Lent Shipyard, and De Voogt Naval Architects. Feadship is well-known as one of Netherlands’ most elite yacht builders and delivers superyachts from 50–100+ meters in length.Credits: Feadship Facebook
October 18, 2021
All news