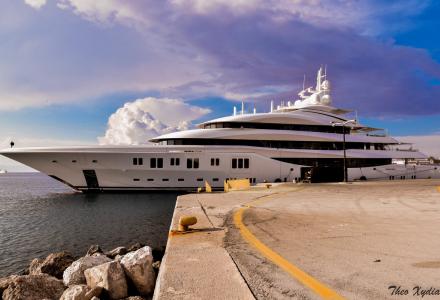 91m megayacht Lady Lara, owned by Kazakh billionaire Alexander Machkevitch, has been spotted in Rhodes, Greece. Launched in April and delivered in November 2015, she embarked her first sea trials in July. 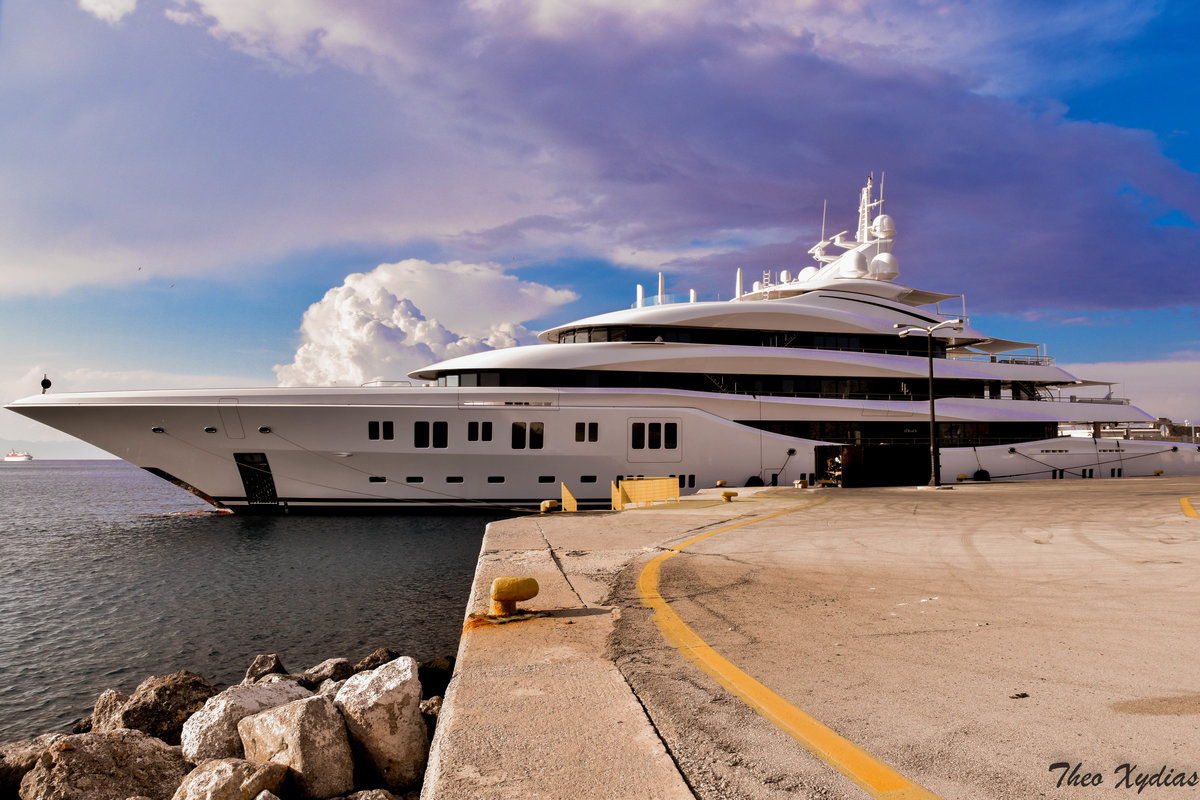 Built by Lurssen, the yacht features the exterior and interior design from Reymond Langton. Lady Lara's alluring amenities include VIP suites with fold down balconies, a large beach club, a gym, Jacuzzi, a swimming pool and a helipad.
The vessel features a steel hull and aluminum superstructure and has previously been spotted in Seychelles, Dartmouth, in the Caribbean and in Cala di Volpe, Sardinia.
Photo by Theo Xydias
Facebook
Twitter
Google+ 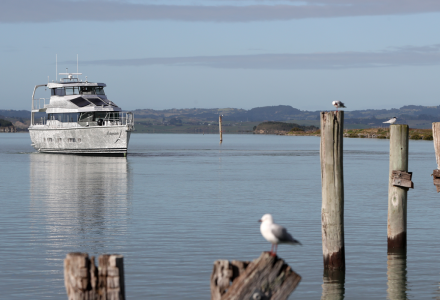 Circa’s 24m Yacht Mollymawk at the Sea Trial
Mollymawk, the hull #1 of the Circa Marine 24m series, has started extensive sea trials in a range of conditions to monitor and record her performance and handling. The preliminary data collected is looking very exciting, and the fuel burn numbers are really encouraging, says at the shipyard. The vessel has a volume of 80 GT. The exterior and naval architecture interior are made by LOMOcean Design, while the interior is made in-house. Mollymawk can reach a maximum speed of 13 knots with a range of 5000 at miles at cruising speed. Circa Marine is a long established family operated company with over 40 years proven history in building high quality aluminium vessels. The company is based in New Zealand. Credits: Circa Marine
May 17, 2021 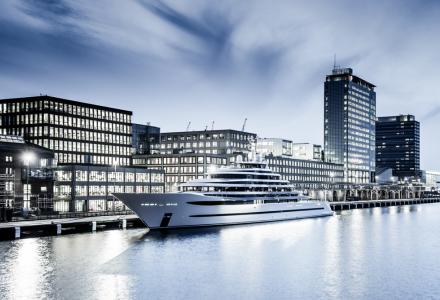 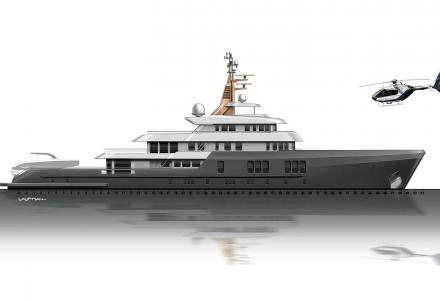 The 58m Project Phoenix Has Been Listed for Sale
The 57m former cable laying vessel is ready to be transformed into an expedition superyacht. The yacht was launched in Holland in 1968 by the E.J. Smit & Zoon shipyard. After over 30 years of successful commercial sailing, she has been stripped to her bare steel framework and is now prepared for a large scale conversion project. Following the transformation, she will sail as a luxurious superyacht, whilst preserving her excellent seakeeping abilities that once made her a successful cable laying ship.The project will be undertaken by Turkish shipyard ICT Yachts. The team will be full of superyacht experts such as Frank Laupman’s Omega Architects and the naval architecture has been penned by Van Oossanen Naval Architects.Project Phoenix can accommodate 12 guests in six staterooms, private owner deck is included. The yacht will be able to reach a top speed of 13.5 knots and will have a range of 11,000 nautical miles. Project Phoenix is now for sale with Ocean Independence. Her asking price is 29 500 000 euro. Credits: Ocean Independence
May 15, 2021 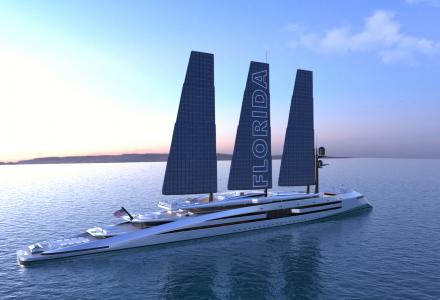 Kurt Strand Most Amazing Concepts
Florida based Norwegian designer Kurt Strand has revealed a number of interesting superyacht concepts. We picked up three of them. Miami 133m Miami is the explorer yacht with six decks. She has a 20m beam. She’s made for the ultimate yachting experience and has everything for an active-lifestyle – a large selection of water toys, including two tenders, two helicopter pads, two Mercedes G 6X6 off road trucks. She also features a 360 degree all-round view sky bar, a cinema and a night club. Miami can accommodate 20 guests in ten cabins. She has a top speed of 20 knots. Aurora Borealis 122m Aurora Borealis is a 122m explorer inspired by Norwegian nature. The yacht is 6-storeys high, has a length of 122m and a massive 20m beam. A large helicopter pod is located on the aft deck. In front of the landing pod is a swimming pool with a retractable glass floor, to move the helicopter inside the hangar, large enough to park two helicopters. Accommodation is for 20 guests and 48 crew and has a huge selection of tenders and toys. In the aft is a drive-in bay area for a submarine and a 45 feet tender. The owners will enjoy a 180 degree view from the 400 sq m suite with outdoor hot tub, gym, spa, office, library, wine cellar. She can reach a top speed of 20 knots. Florida 160m Florida is the 160m sailing superyacht concept. It has a space age technology wing masts made from carbon fiber. Three 80m tall wing sails are electro-hydraulic telescopic retractable. If that alone isn’t beyond spectacular, the wing sails are even covered with the latest state of art solar panels. In case of no wind this superyacht can transform into "solar sail" mode. The control system will automatically adjust the sails into an optimal angel against the sun rays. When it's windy, the yacht gets into sail mode and can also produce electric power from solar panels. To always keep the sun absorbing surface high glossy, a built-in system will wash and polish the wing mast every time it retracts. The “solar sails” can even be raised when the yacht is laying in a harbour. It will turn the sails automatically away if wind comes up. Power will be stored in the battery bank and can be used for the onboard Hydrogen production as well.At the bottom of the yacht are fitted hydro generators, which also produce electric power while the yacht is moving under sail. All electric power produced will be stored in a 5MW battery bank and can be used to create Hydrogen directly on board of the yacht . In case of no wind or sunshine the yacht can be run on hydrogen fuel power cells. The yacht also has a backup genset system, running on fossil fuel. However fossil fuel will be rarely used, depending on where in the world the yacht is situated.Sail yacht Florida provides an ultimate, luxury water travel experience. She will accommodate up to 24 guests in 12 luxury suites and 40 crew members.Credits: Kurt Strand
May 14, 2021 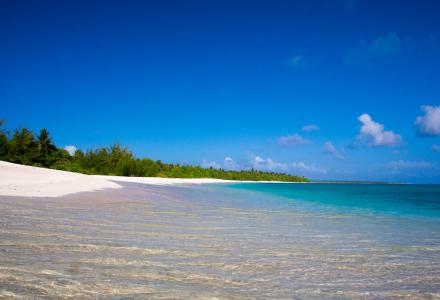 The Republic of Marshall Islands Have Changes Its Yacht Code
The Republic of the Marshall Islands (RMI) Yacht Code (the “Code”) has been updated. Here is the 2021 updates: • new requirements for modern design elements such as underwater glazing for observation lounges and glazed bulwarks; • helicopter landing areas (Annex 2 of the Code) revised throughout with alternative standards for firefighting; • shipyards now have the possibility to apply for a Helicopter Landing Area Technical Certificate (HLATC) issued by an Aviation Inspection Body (AIB); • a more practical approach for submersible launching; • a practical approach to structural fire protection for Category 2 yachts; • modified rescue boat requirements to provide a practical alternative standard for yachts < 500 gross tons; • updated radio equipment requirements; • modified firefighting appliances to provide alternative standards when taking the typical size of the yacht into consideration; and • safe working practices for working over the side and man-riding cranes were clarified and addressed to meet national requirements. International Registries, Inc. and its affiliates (IRI), who provide administrative and technical support to the RMI Maritime and Corporate Registries, organized an RMI Yacht Technical Working Group (YTWG) to make recommended amendments to the Code. Marc Verburg, IRI’s Fleet Operations Manager, Yachts, led the YTWG whose members consisted of representatives from the RMI Registry, Classification Societies, yacht managers, naval architects, surveyors, maritime safety consultants, and aviation experts. The Superyacht Builders Association (SYBAss) was also instrumental in the review of the amendments to the Code. “It was a privilege to work with such a global team of experts. The Registry truly appreciates their assistance with the amendments to the Code which now further reflects the recent changes in the market, from a practical approach to helicopter landing areas and facilities to the use of glass without compromising safety,” said Marc Verburg. “The 2021 version of the Code allows builders and designers to create innovative and safe superyachts to a practical standard,” he continued. In 2020 SYBAss members were responsible for the construction of almost 60% of 40 meter or more yachts delivered worldwide. “We are an innovative industry which embraces new technologies and materials, so we’re pleased to see this reflected in this forward-looking update of the Code. It takes a practical approach to the requirements of the superyacht industry and is fully aligned with the mission of the International Maritime Organization,” said Lorenzo Pollicardo, Technical and Environmental Director, SYBAss. “The RMI offers many options for yacht owners in terms of registration and operation through the various chapters of the Code,” said Patrick Bachofner, IRI’s Director, Geneva Office and Worldwide Director, Yachts. “The practical amendments brought forward in this revision to the Code once again set the RMI yacht registry apart from others,” he concluded.Credits: Wikipedia; Kurt Cotoaga/Unsplash
May 14, 2021
All news