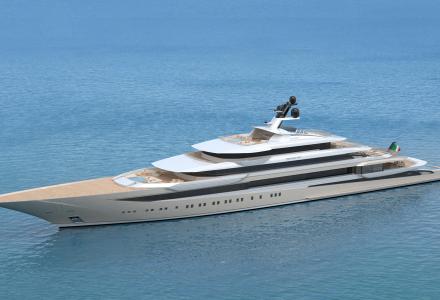 Fincantieri has teamed up with one of the world's most esteemed yacht designers Horacio Bozzo to create the 120-metre megayacht concept Private Bay. 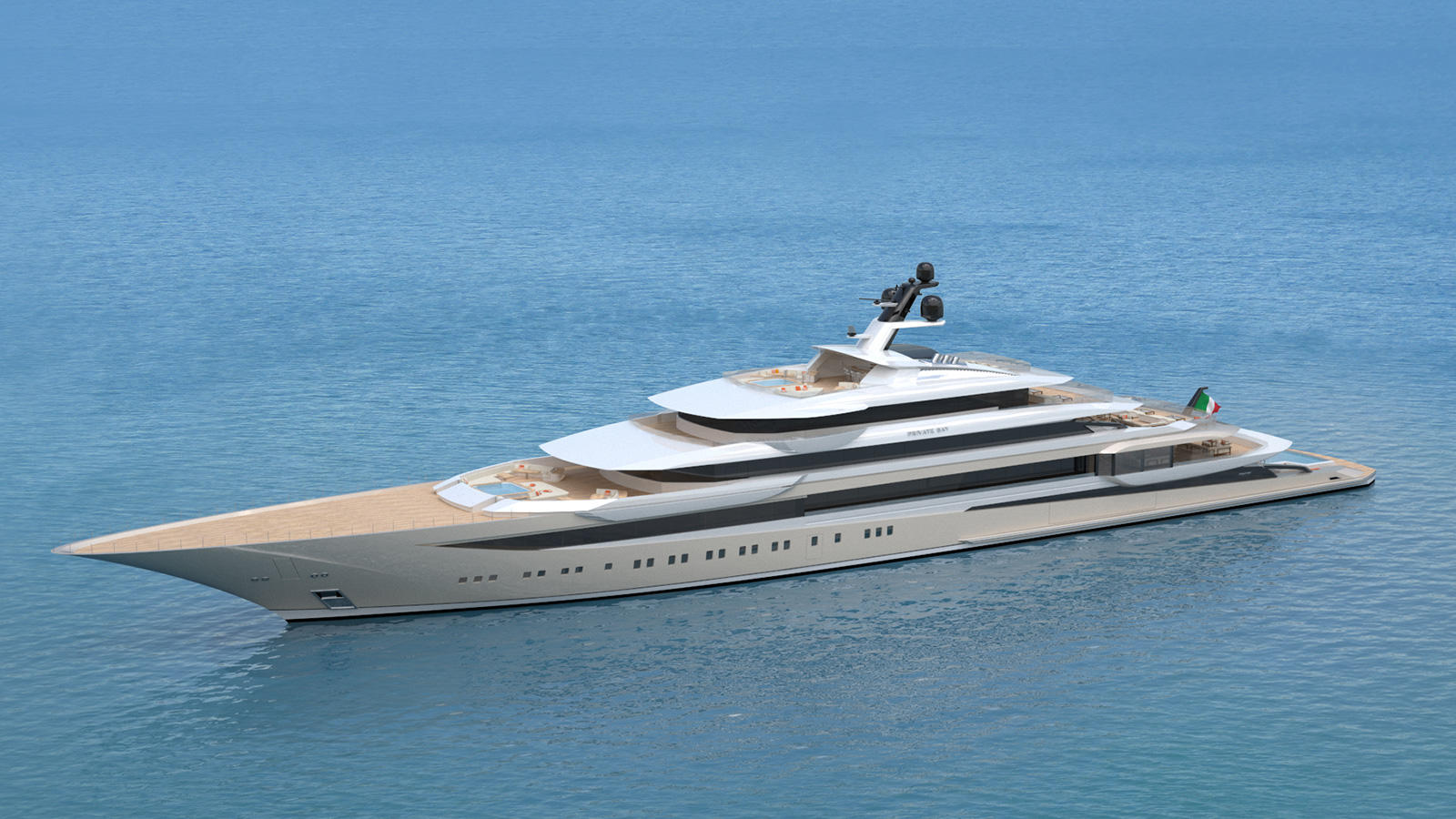 Exterior relaxation spaces are plentiful, with two large Jacuzzi’s, one on the foredeck and one on the sun deck, both surrounded with large sunpads and relaxation areas. Back aft, the open beach club concept is a unique feature that includes a 160m2 lounge area with side openable windows, alfresco cinema, and a huge sea level pool with bar. There are also submergible stairs, a platform for gentle access to the ocean, and a generous swim-platform for easy boarding of water toys.
On the inside, this multihull megayacht boasts a voluminous interior totaling 5,400 gross tonnes – more than enough room to host 18 guests and a crew of 31. The project has six decks with a 17.7-metre beam and 4.25-metre draft. 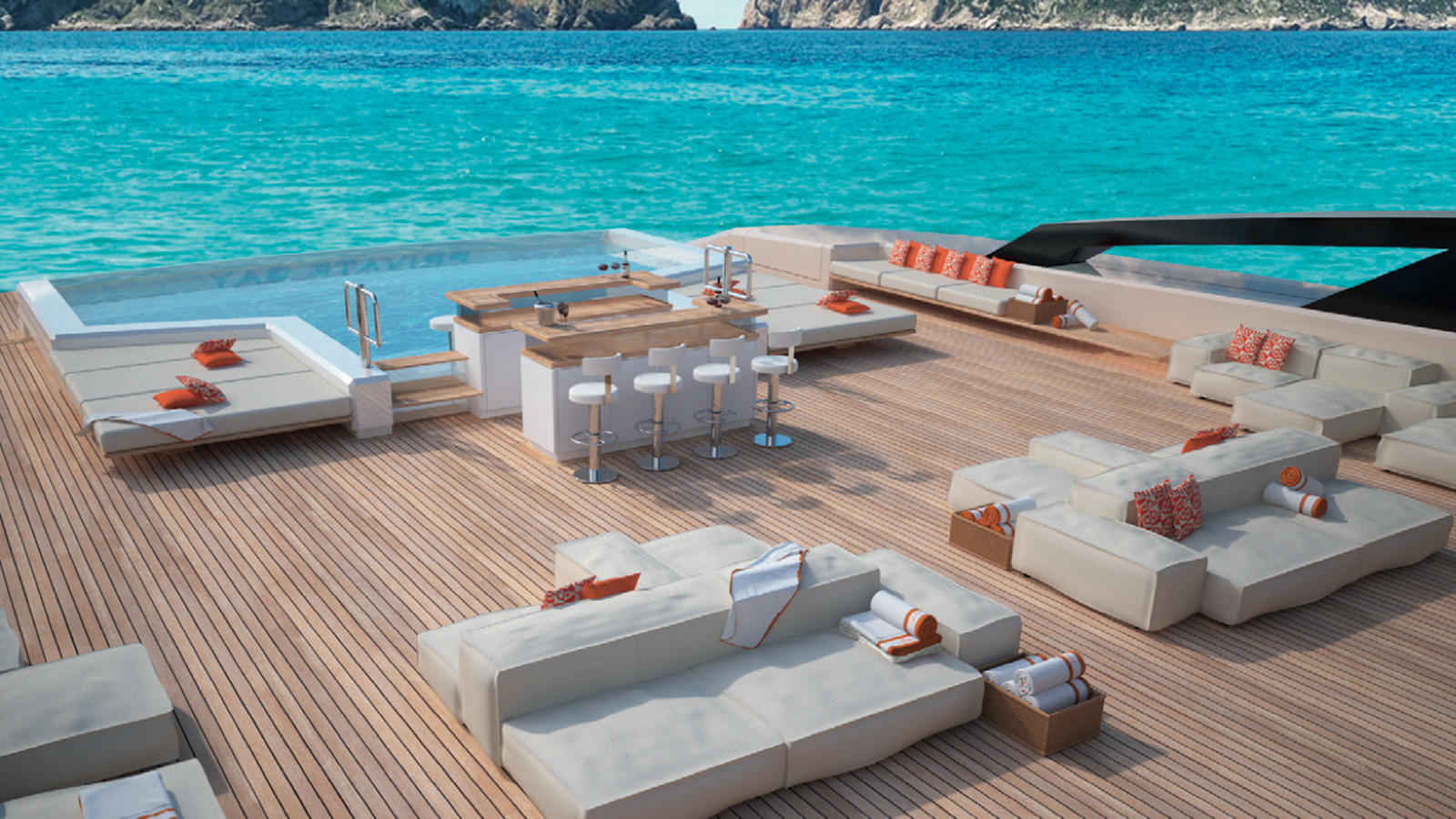 Power would come from a two diesel engine propulsion system driving 2CPP propellors for a top speed of 18.5 knots and a maximum cruising range of 5,500 nautical miles.
During the unveiling of the design at the Fort Lauderdale Boat Show, designer Horacio Bozzo described Private Bay as a new vision of a megayacht, conceived for those wishing to live close to the sea to enable an authentic experience.
Fincantieri operates 21 shipyards spread out through North America, South America, Europe and Asia. It also owns three design centers, a naval research centre and two production sites for systems and mechanical components manufacturing.
Facebook
Twitter
Google+ 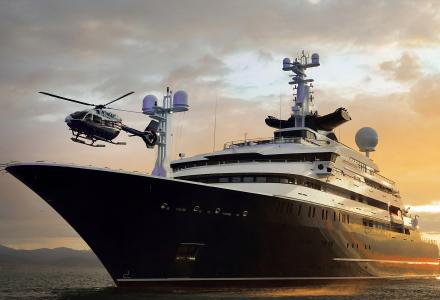 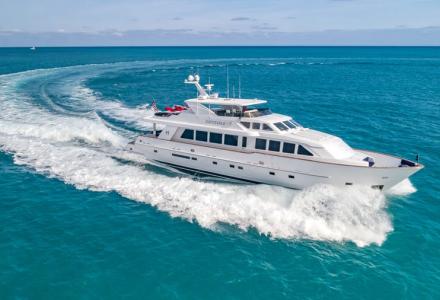 Hargrave motor yacht Inevitable got a new owner
The motor yacht Inevitable which measures almost 30m has been sold by Northrop and Johnson's Whit Kirtland. The 29.57m motor yacht Inevitable has been sold, with Northrop and Johnson’s Whit Kirtland representing the seller in the deal.It’s inevitable to fall in love with this luxury motor yacht Inevitable. She features a classic and stylish Hargrave design.Inevitable was built by US shipyard Hargrave Custom Yachts in 2003 and generously upgraded in 2012, 2016, and 2018. Now the boat is in like-new condition. She features an exterior design by Jack Hargrave and her interiors were completed in-house.She is offering accommodation up to 9 guests taken care of by a crew of 4. Her master cabin features a walk around king-size bed, long couch, and en-suite master bath. The aft deck has everything for quality time in the open air with built-in upholstered seating, a fridge, a table, and a weatherproof 32-inch Samsung television screen. Upon the flybridge, there is further al fresco dining and lounging with hard top cover.Inevitable provides big toy storage. Guests can enjoy water skis, a slalom water ski, two kayaks, fishing gear, two jet-ski, tube, wakeboard, two standup paddleboards, snorkeling gear, and rendezvous diving.She cruises at 16 knots and reaches a top speed of 20.0 kn.Inevitable was asking $1,770,000.
June 3, 2020 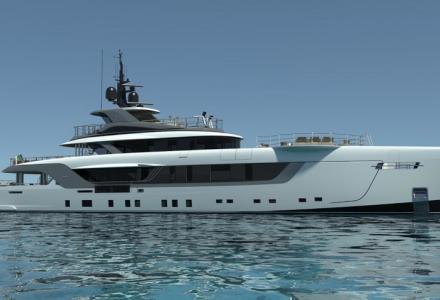 Admiral is launching superyacht Geco
Italian shipyard Admiral is about to launch in-build 55m superyacht Geco.The launch is set to take place from 11 am CET/10 am GMT+1 on Thursday, June 4.It is possible to join the livestream of the event by clicking here.Geco is built from aluminum as one of the Admiral S-Force series. The superyacht can accommodate 12 guests in 6 cabins, including a master suite, VIP stateroom, two double cabins, and two twin cabins. She is also capable of carrying up to 13 crew members onboard.Her impressive interior is complemented by huge exterior decks, with a large pool, open-air sundeck with a full gym, and a Touch and Go helipad for seamless arrivals.Geco is a motor yacht, which has an impressive list of tenders and toys including two Jetskis, kayaks, and snorkeling equipment.
June 3, 2020

Welcome aboard 105m superyacht Lady Moura
At her launch in 1990, Lady Moura was the most expensive and innovative yacht in the world. As a private yacht built by Blohm & Voss, with a length 105m, she was extremely outstanding.In an era when only clients of Royal status were able to possess such luxury, Lady Moura was registered as the ninth largest yacht ever built. She definitely set a new standard in yachting 30 years ago.Built to be a private residence, the yacht has been cloaked in mystery to the outside world for three decades. But now the yacht is for sale for the first time by her original owner, and we finally have a chance to have a look inside.Most of the interior is still original.An army of the crew who knows every corner of the boat helps to keep the youth and beauty of the boat.“The average time crew have been on board is 18 years: the chief housekeeper has been here for 25 years; the bosun 28 years; the chief engineer came on board the first time in 1993; the captain has been here for 17 years. A lot of people have spent more time on this boat than at home over the last 20 years,” says relief captain Sebastian Rauber.Lady Moura has never been chartered, she hasn’t even moved much. “Cruising – we didn’t do too much,” says Captain Matthias Bosse.26 guests can be accommodated across seven decks of which one is a dedicated owner's deck which includes six staterooms. The interior covers Lady Moura's lounges and reval dining rooms with luxury, yet functional furnishings.Up to 72 crew members are available for any requests, furthermore, guests can make use of the amenities, such as the helipad, a gym, movie theatre and a disco with DJ room. Top top it off the recreational deck feature a spa with sauna and an indoor pool.The beach club is easily accessible from the ocean via six gangways and two entrances for use by one of the superyacht's tenders.There are 5 spacious cabins for children held in lighter colors. During recent updates, the generator and engines have been rebuild, as well as new team decks, refurbished crew, and technical spaces. Due to an advanced remote monitoring system that allows for condition-based maintenance and real-time troubleshooting, she is in excellent condition.
June 3, 2020 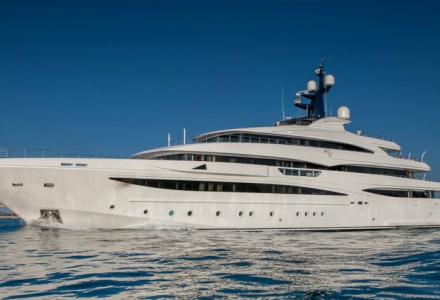 74m CRN Motor Yacht Odyssey II sold and renamed Lady Jorgia
Fraser introduced the buyer of the 74m CRN motor yacht Odyssey II, which was jointly listed by Burgess and Fraser. After getting a new owner, the yacht has been renamed to Lady Jorgia.The yacht is built from a steel hull and has an aluminum superstructure to Lloyd's Registry standards and is MCA compliant. It got delivered to her owner in 2017.Offering guests every luxury imaginable, including a spa with hair salon, indoor and outdoor cinemas, and a gym, Lady Jorgia represents onboard all dreams coming true.Lady Jorgia offers accommodation for 12 guests in 6 rooms, consisting of one master suite, 1 VIP stateroom, 2 double cabins and 2 double/twin cabins. Additionally, 22 crew members fit on it, making sure no request will be unfulfilled. Elegant and stylish interior and furnishings create a timeless and elegant atmosphere.Odyssey II was priced at €84,000,000 at the time of sale.
June 2, 2020
All news