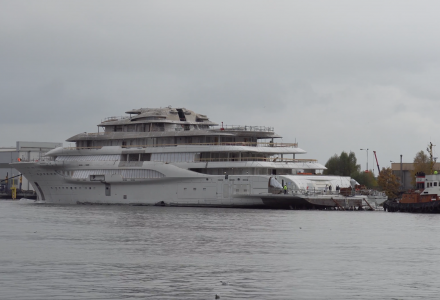 At least six 100m+ megayachts under construction at Lurssen 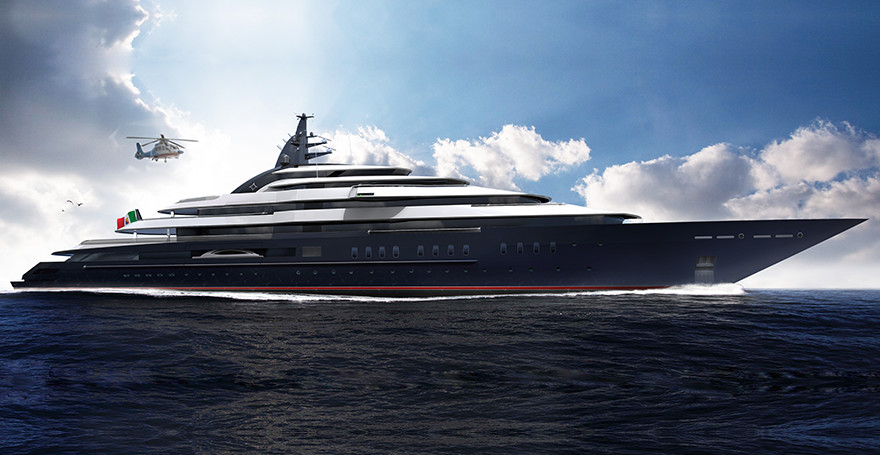 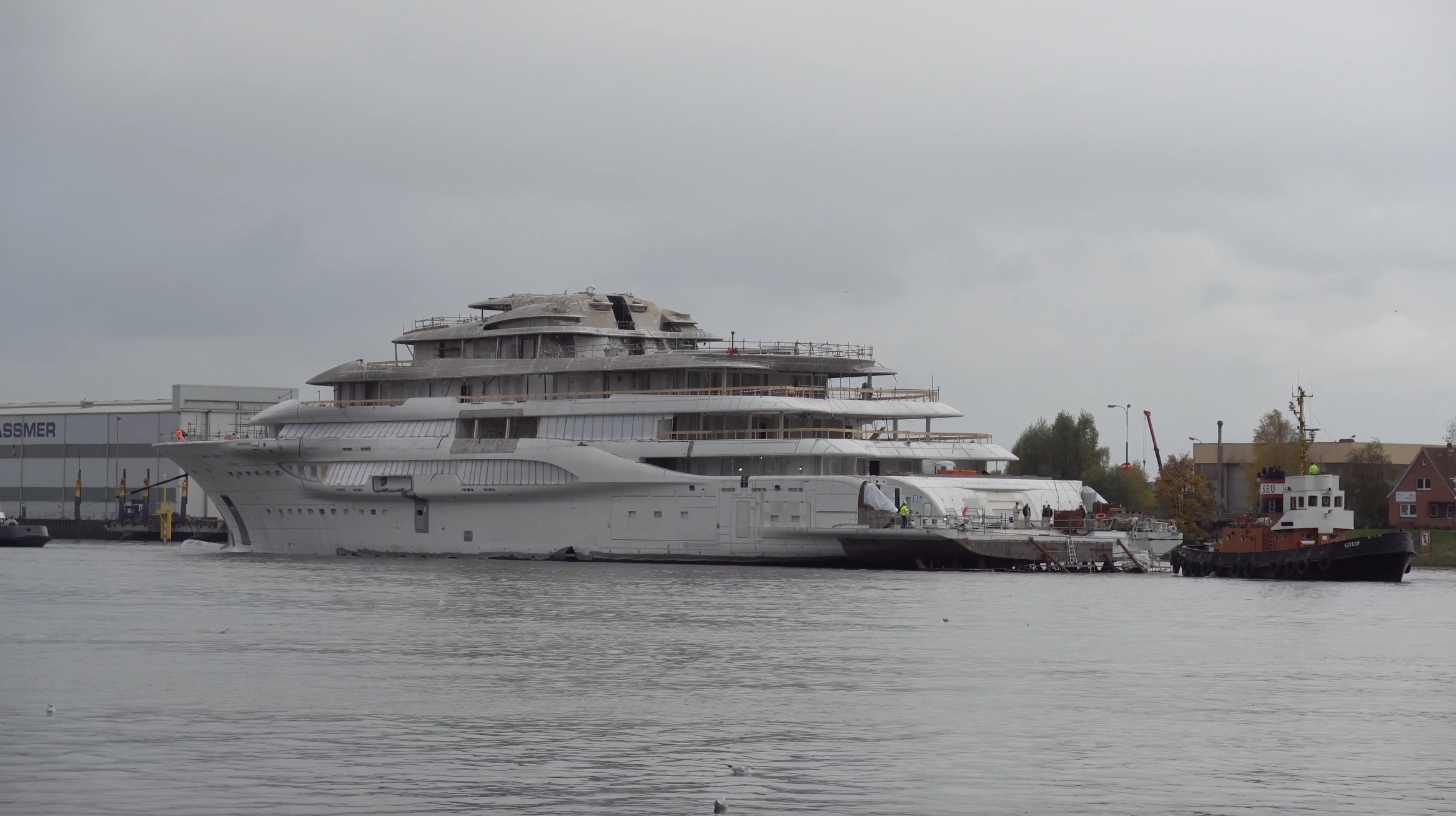 Length: 130m+ (426+ ft)
Project SHU is amongst Lurssen's most secretive projects even her project name was in fact only recently discovered by yacht spotter, DrDuu.
Project Jupiter 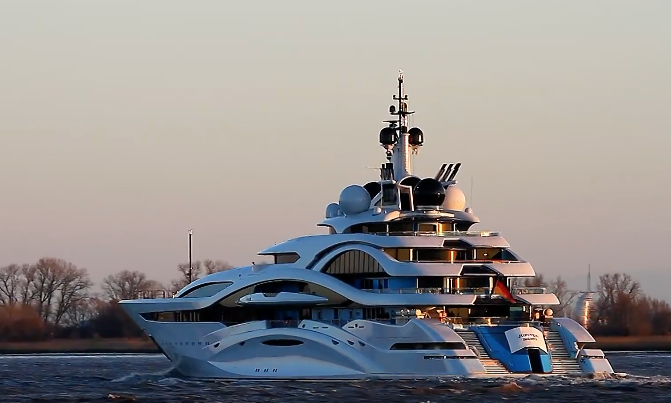 Length: 123m (403 ft)
Designer: H2 Yacht Design (exterior) / March & White (interior)
Delivery: 2017
Launched to praising reviews from the yachting community in October 2016, the 123-meter is currently undergoing sea trials. Amongst her known features are a helipad on the bow, and a glass atrium that lets light sift through the vessel.
Project Palo Alto/TIS

Length: 112m (367 ft)
Designer: Winch Design
Delivery: 2018
Commissioned by a long-time charterer, Palo Alto was designed by Andrew Winch with the owner's input touching on all aspects of the build from guest accommodation to crew area design. Amongst her key amenities will be two helipads and four 10m+ tenders. The yacht will be able to accommodate 24 guests in 11 guest cabins and one master suite stretching over a whole deck. Launched on October 19th 2016, her actual project name appears to now be TIS.
Project Mistral 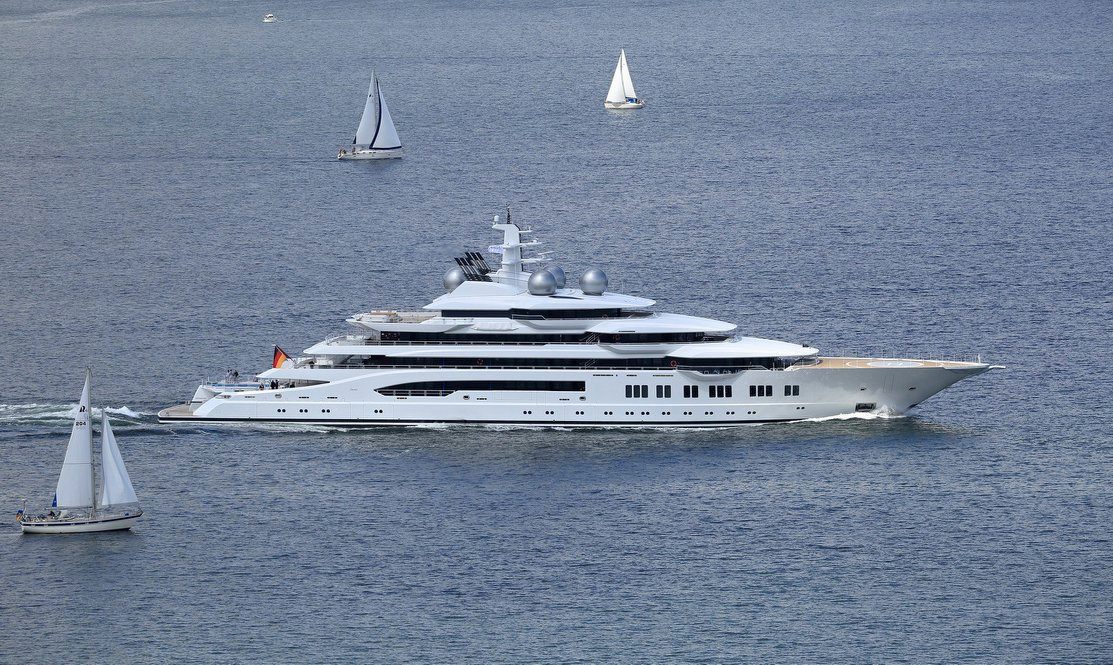 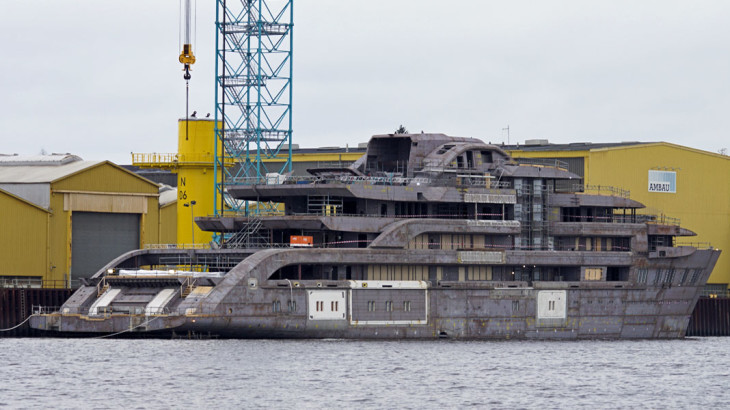 Length: 100m+ (328+ ft) - estimate
Delivery: 2018
Similarly to Project Shu, very little is known about this project, which was first seen in November 2015 when moved in between sheds.
Several sources have also indicated us that two other 130m+ projects are currently under construction at the Bremen facility, 147m Project Sassi and 130m+ Project Sherasheda due for delivery in 2018 and 2019 respectively.
Photos by DrDuu, Carl Groll
Facebook
Twitter
Pinterest 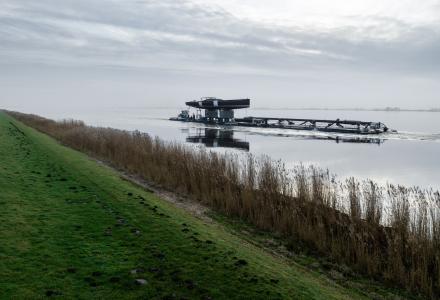 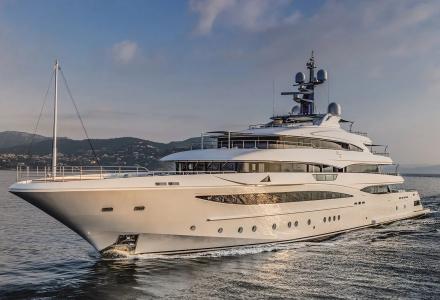 74m Lady Jorgia Left the Market and Renamed Andrea
The 74m Lady Jorgia has been sold by Edmiston's in-house deal – the broker Alex Busher represented the buyer and the seller. After the sale the yacht was renamed Andrea. Andrea was launched by Italian CRN in 2017. She features a bottom-glassed pool, a spa, and spacious foredeck bow, which can be converted into a dancefloor or set-up for a dinner setting plus a large upper deck aft that connects smoothly with the main inside dining area. Her exterior was made by Zuccon International Project, while the interiors are the work of Winch Design. In 2017 she got the Best Layout award for her category at the World Yacht Trophies 2017.The 74m superyacht can accommodate 12 guests across eight cabins, including an exceptional master suite with huge windows offering panoramic views from bed and a private terrace forward.Thanks to two Caterpillar engines Andrea can reach a maximum speed of 16.5 knots and a cruise at 15 knots. She will be available for charter with Edmiston. Credits: Edmiston; Yacht Harbour archive
February 6, 2023 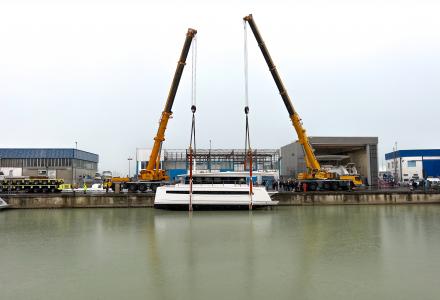 First Silent 60 Launched in Fano by Silent-Yachts
Silent-Yachts has launched the very first solar electric catamaran Silent 60 at its own shipyard in Fano, Italy, which has been acquired in spring 2022.“We are happy that our Italian shipyard performs really well. It was the right decision to purchase and develop it in a way that is in line with our corporate long-term strategy,” said Michael Köhler, Founder and CEO of Silent-Yachts. The first Silent 60 has four guest cabins on the lower deck (the series allows up to six cabins + one crew cabin), including a spacious master suite in the bow. There are numerous social areas on board, including an airy main saloon, an aft cockpit, a cozy bow area and a flybridge. Thanks to a draft of under 1m the Silent 60 can access shallow bays, a crucial consideration for cruising grounds in the Caribbean and South East Asia. Two swimming platforms in the stern can be extended on owner’s request to carry a pair of electric jet skis. The lifting hydraulic platform between the two platforms can carry a 4-meter tender.“The Silent-Yachts catamarans are built to last and they are reliable ocean going vessels,” says Michael Köhler. “They require virtually no maintenance especially compared to yachts with traditional combustion engines. In addition, warranties for batteries and solar panels are for 8 and 25 years respectively.”The recently launched Silent 60 is equipped with 2 x 250 kW engines for the maximum speed of 14 knots. The catamaran carries 42 solar panels for 16 kWp of solar energy to power two electric motors of 2 x 250 kW. Backed up by a battery capacity of up to 210 kWh, she will be able to cruise efficiently with zero emissions solely on solar power for up to 100 nautical miles a day for weeks.Silent-Yachts is producing the world’s first fully solar-sustainable oceangoing production catamaran yachts. They are powered exclusively by solar energy and capable of cruising up to 100 miles per day. In 2009, founders Heike and Michael Köhler, who have spent 6,000 days cruising more than 75,000 miles all around the world, launched the Solarwave 46, the first fully self-sufficient blue-water catamaran after years of testing solar-powered propulsion, and they have been building boats ever since. Credits: Alessandro Guerrieri/Silent-Yachts
February 6, 2023 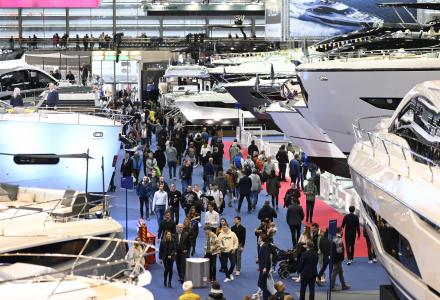 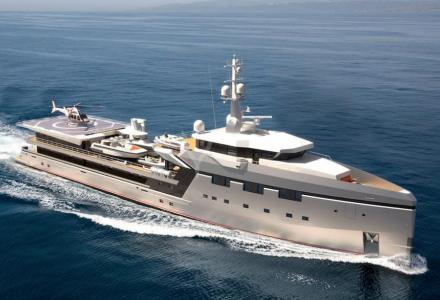 75m Support Vessel Abeona Delivered by Damen Yachting
Damen Yachting has delivered the support vessel YS 7512, now known as Abeona after a Roman goddess of outward journeys and safe returns. The order for the vessel, supposedly from Jeff Bezos, but the information wasn’t confirmed, was received in 2019. The model features customized in-house design based on the YS 75 model in the Damen Yacht Support range. The project on behalf of the client was supervised by Wright Maritime Group. In January Abeona arrived in Gibraltar after successful sea trials in December. The 75-meter vessel has a beam of 12 meters and a volume of approximately 1,900 GT. She features a helicopter hangar with a D14 value, has state-of-the-art environmental equipment and capacity for containerised emergency relief support equipment together with a wide range of specialized marine gear and tenders. The vessel will be able to accommodate up to 45 people including crew, specialist staff and guests.She has a top speed of 18 knots and a range of 5,000 miles at 15 knots. Damen Yachting, a division within the Damen Shipyards Group, was created in 2019. The division combines the pedigree and heritage of Amels yachts with a growing portfolio of SeaXplorer yachts and Yacht Support vessels.Credits: Damen Yachting
February 3, 2023
All news