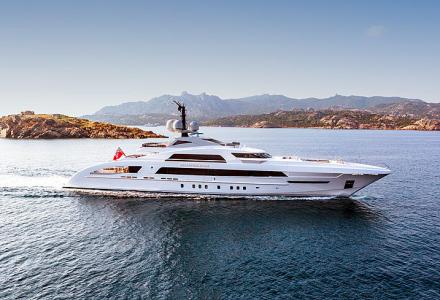 Heesen' second largest yacht Galactica Star is being offered for sale in a sealed bid arrangement starting on April 4, 2019 with the close of bidding on May 19th. The sale process was proposed by the U.S. Department of Justice and the Federal Republic of Nigeria and approved by U.S. federal court, as a part of ongoing corruption case against two Nigerian nationals, according to The Marine News. 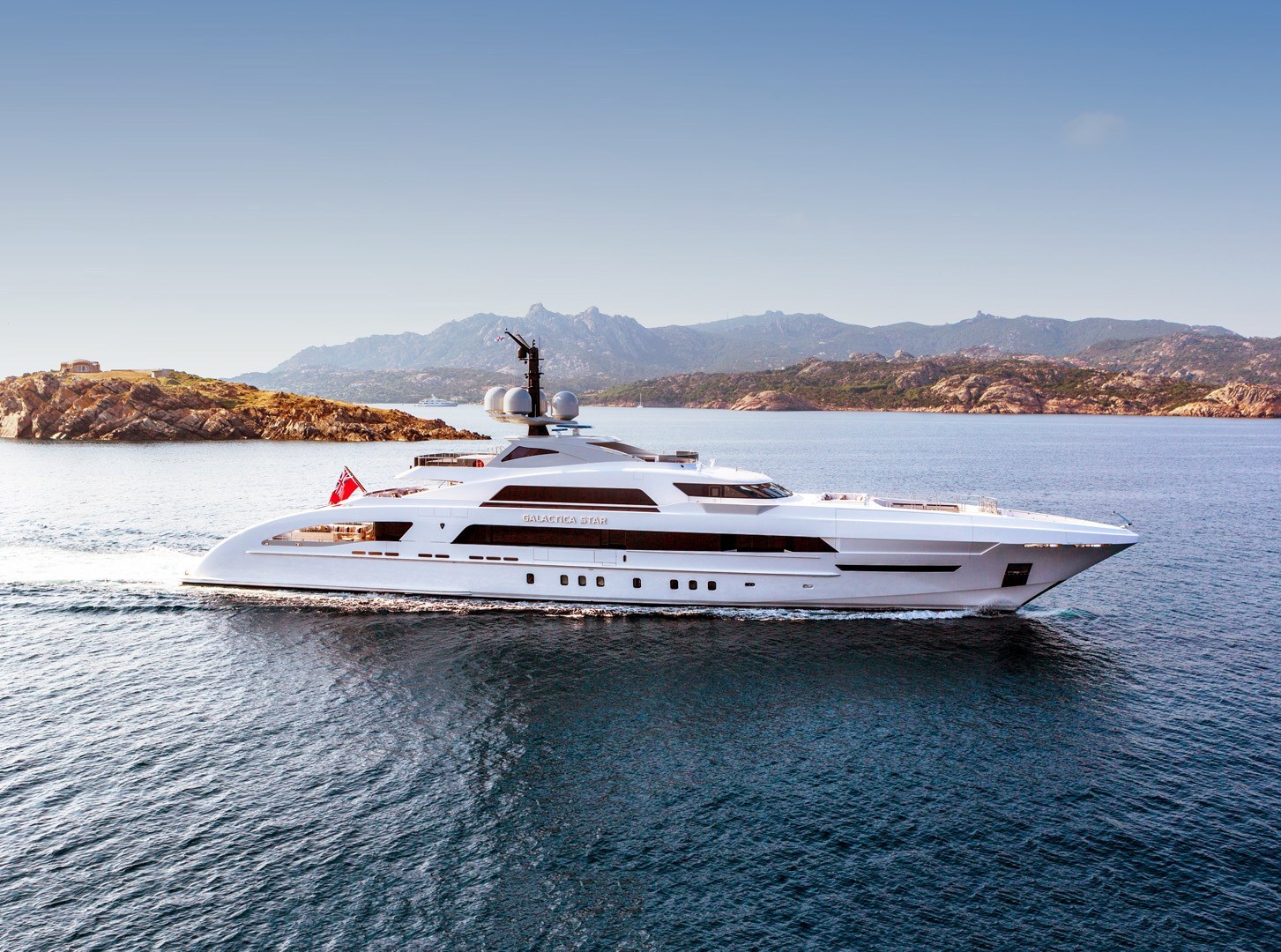 The sale follows a court-ordered seizure of the yacht's owner's assets due to possible connections to an ongoing Nigerian oil corruption scandal, triggered by the Panama Papers investigation.
The superyacht was allegedly bought by Nigerian oil magnate Kolawole Aluko, who is one of four defendants accused of cheating Nigeria out of almost $1.8 billion in siphoned crude oil sales, reports The Marine News. The U.S. government also accused Aluko and another oil executive, Olajide Omokore, of laundering money in the United States and using it to acquire the yacht, among other assets. 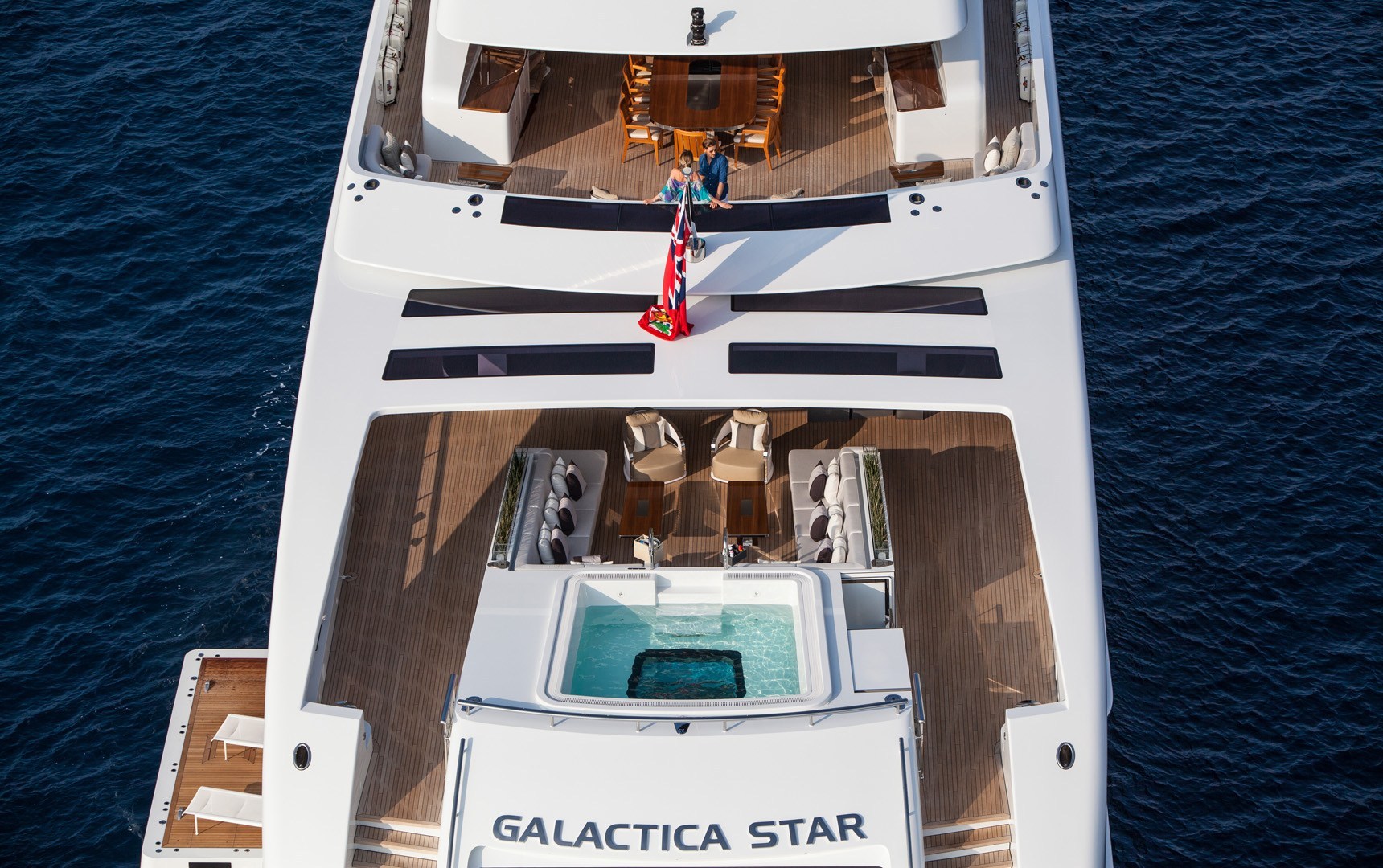 The US and Nigerian governments received Federal Court approval to sell the superyacht last month in Texas. According to Law360, a legal news source, U.S. District Judge Keith Ellison approved it due to high maintenance and dockage fees, estimating the combined cost at around $170,000 per month.
The sealed bid will be managed by Fraser, with the MRP set at $42,000,000. Following the close of bidding, the winning bidder will have five days to deposit five percent of the accepted total into an escrow account. 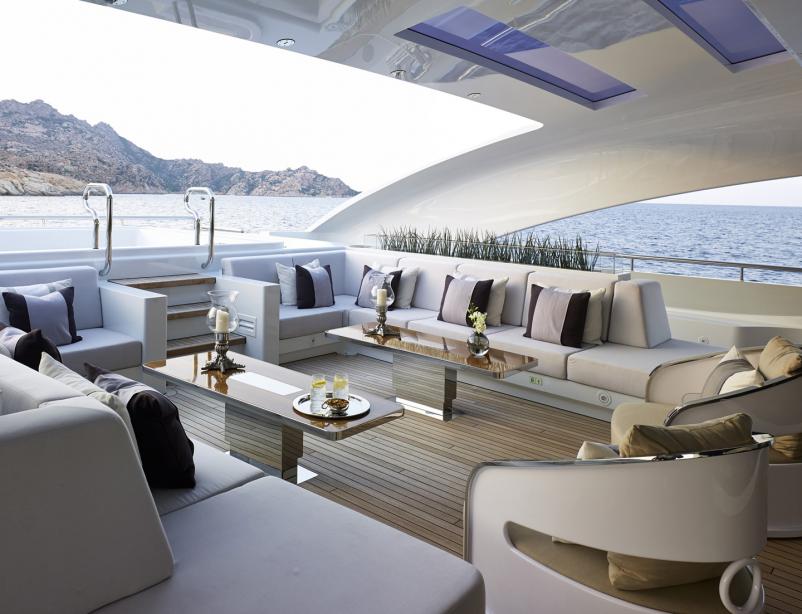 Custom motor yacht Galactica Star was built by Heesen in Netherlands at their Oss shipyard and delivered to her owner in 2013. She features exterior styling by Omega Architects, and engineering by Van Oossanen & Associates. Meanwhile, the yacht's interior has been designed by Bannenberg & Rowell.
Galactica Star accommodates up to 12 guests overnight in 6 cabins, comprising a master suite, 1 VIP stateroom, and 4 double cabins. She is also capable of carrying up to 13 crew onboard to ensure a relaxed luxury yacht experience.

The most alluring feature about the vessel is what goes on below the waterline. Van Ossaanen Naval Architects successfully created a yacht that cruises 30% more efficiently than a conventional round-bilged motor yacht in this size range.
Powered by 2 MTU 5,592 HP diesel engines and propelled by twin screw propellers, Galactica Star is capable of a top speed of 27 knots, and comfortably cruises at 24 knots. With her 90,000 fuel tanks she has a maximum range of 4,200 nautical miles at 14 knots. Her water tanks store around 30,000 litres of fresh water. 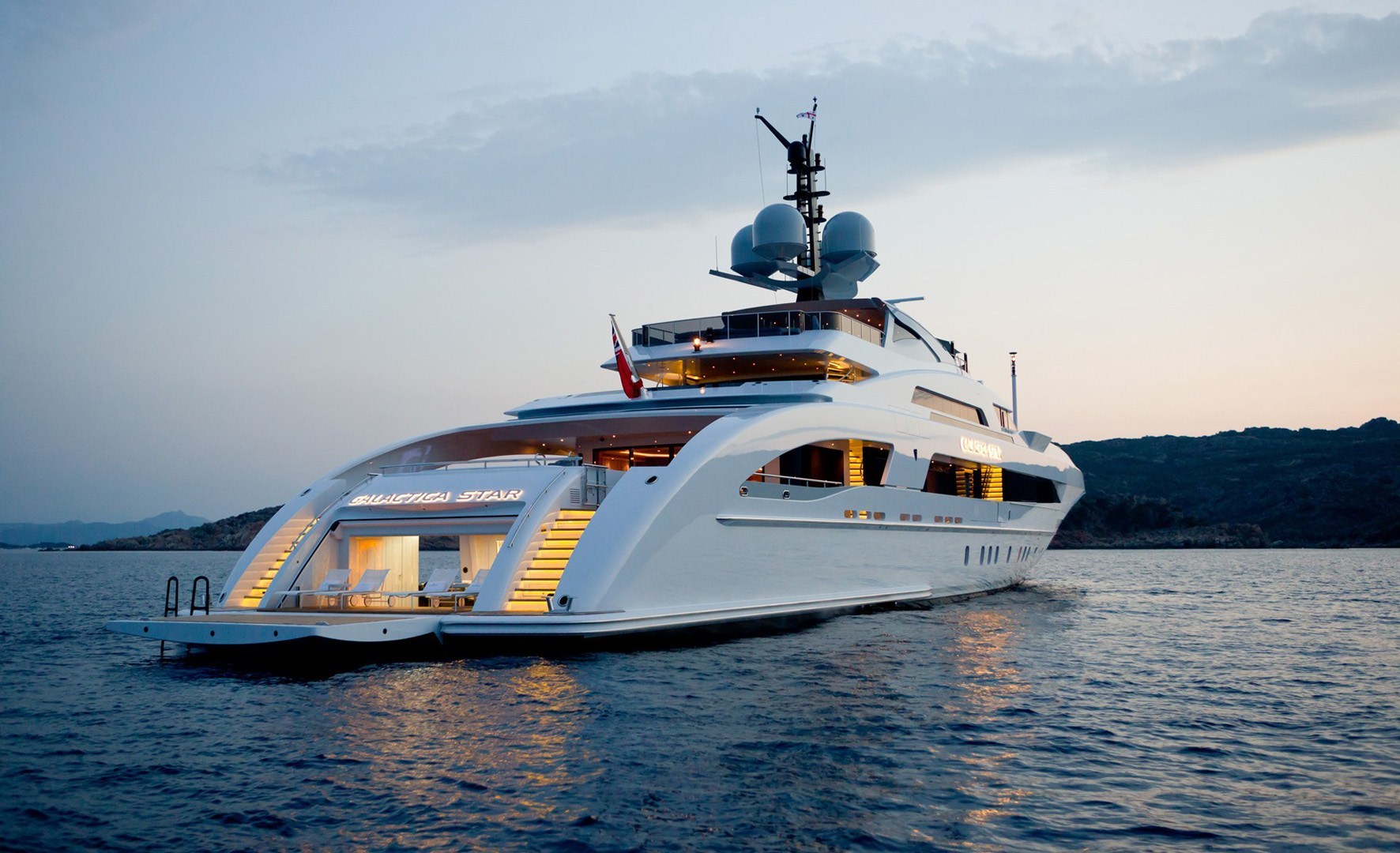 The yacht used to be popular for charter among celebrities, for instance, once rented by American music industry power couple, Jay Z and Beyonce for a holiday cruise, according to WithinNigeria.
Facebook
Twitter
Google+ 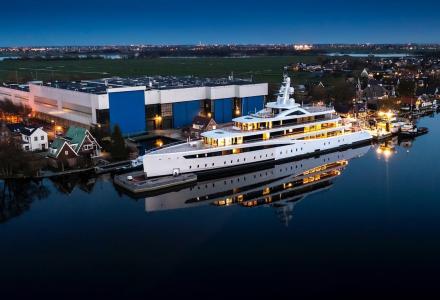 Feadship’s 94m Project 817 Starts Her Journey To the North Sea
The 94m Project 817 was launched in February and now on transport from the yard at Kaag to Amsterdam for sea trials and final outfitting. This spectacular vessel was designed by Azure and Studio De Voogt. The interior was made by Peter Marino Architects.Her advanced hybrid propulsion system allows the yacht to cruise on diesel-electric power at 12 knots. In diesel mode she’s able to reach a top speed of 20 knots. Feadship was formed as a group in 1949 as a marketing partnership between six Dutch shipyards, de Vries Lentch, Van de Stadt, Witsen & Vis, Akerboom, De Vries Scheepsbouw and Van Lent Shipyard, and De Voogt Naval Architects. Feadship is well-known as one of Netherlands’ most elite yacht builders and delivers superyachts from 50–100+ meters in length.Credits: Feadship
April 15, 2021 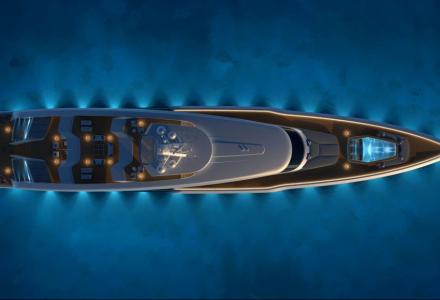 Video of the Day: A Group’s 83m Concept Comète
The 83m concept Comète comes from the A Group designer Thibaud Le Merdy and yachting director Matt Pegrum. <iframe width=560 height=315 src=https://www.youtube.com/embed/pjco2ulDBXA title=YouTube video player frameborder=0 allow=accelerometer; autoplay; clipboard-write; encrypted-media; gyroscope; picture-in-picture allowfullscreen></iframe>This design is the result of the perfect balance between spaces open to the surrounding nature and refined, clean forms. Spaces of the yacht were created to be the closest to the sea and what she can offer, without any hindrance. For the exterior design, A Group has worked on a dynamic and the beautiful silhouette without any compromise.The green technologies are also an important part of the project. The creators were closely monitoring the development of hydrogen fuel cells for the project. In addition to batteries for peak shaving and waste heat-recovery systems (for heating the swimming pool and hot water), which are already proven, the yacht can have an all-around efficient energy production and storage system.Her well-engineered hull form and sleek design made of lightweight materials (to reduce propulsion requirements) remain the most effective way to control the environmental footprint of the yacht.The hybrid solution for reduced consumption also makes it possible to redistribute space on the boat, offering the best place of the boat for guests.Comète can accommodate fourteen guests in seven cabins. Her top speed is 16 knots. Credits: A Group
April 14, 2021 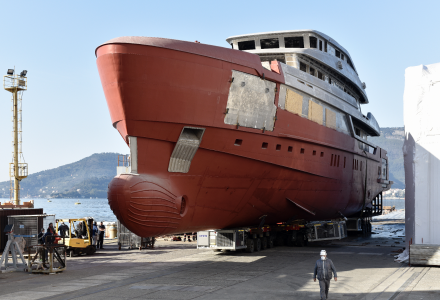 Sanlorenzo Is Starting the Construction of the First Unit of the Superyacht 57Steel
At the La Spezia shipyard, Sanlorenzo is starting construction on the first unit of the superyacht 57Steel, which aims to be one of the new stars of the Sanlorenzo range; she will be equipped with a hybrid diesel/electric engine system. A sophisticated superyacht with an extreme cleanliness of form (something all Sanlorenzo ranges have), she is distinguished by a straight bow, providing an image of importance and decisiveness. The new 57Steel is an ambitious project, the result of intense typological experimentation carried out by the shipyard together with Studio Zuccon International Project, which has led to the creation of a 56.70-meter-long yacht with five decks and a tonnage of 1000 GT.The volumes doubled compared to the 52Steel, which have made it possible to offer indoor and outdoor spaces that are decidedly out of the ordinary for a model of this size and with unprecedented functional content.The innovative layout alters the traditional balance on board: the wheelhouse area, normally forward of the upper deck, has been relocated to an additional deck – a real bridge deck, as on larger yachts – thus making it possible to use the upper deck from a different perspective. This is where the owner's cabin is located, a 54-square-metre space overlooking the very large owner's deck, a private deck from which to enjoy an exclusive view over the infinite sea.The new layout has also made it possible to create a spacious full-beam VIP cabin forward of the main deck that can be used as a second owner's cabin. "The versatility of use that distinguishes the spaces on board is a key element of the 57Steel, which makes it possible to satisfy the many requests of a diverse and multicultural market like that of superyachts,” says Bernardo Zuccon. “A model in which there is no ostentation of the brand and whose external lines are defined and extremely fluid, transparent and clear, in which the language of the shipyard shines through. We can define the 57 Steel as a skilful balancing act between content and container.”The swimming pool, with its transparent floor, allows the passage of light into the environment below; the beach area is 110 square meters. The garage is placed at the bow and can accommodate tenders of up to 7.5 m and numerous toys.Sanlorenzo was founded in 1985 in Viareggio by yacht builder Gionvanni Jannetti. In 2005, Massimo Perrotti became the majority shareholder in the shipyard. Sanlorenzo builds yachts ranging from 28.60 to 62m in length. Credits: Sanlorenzo
April 14, 2021 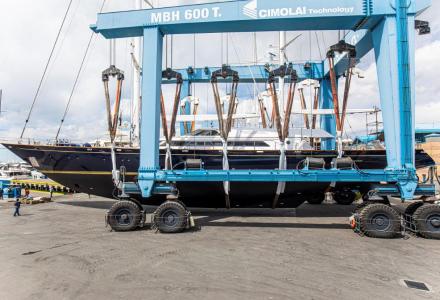 Lusben Has Completed the Refit of 48m Perini Navi’s Morning Glory
The Morning Glory is Perini Navi's 48m sailing superyacht, famous for having Australian media magnate Rupert Murdoch as a previous owner. This historic ketch, built in 1993 at the iconic Perini Navi shipyard in Viareggio, has been restored to her original splendor according to the wishes of her Italian owner. Through the Forza 5 company in Milan, Lusben was chosen to carry out the ten-year refit of the yacht.The Lusben team has painted the hull, living areas, and part of the aft cockpit. The generators were also replaced and almost half of the teak deck were refurbished. The refit went on for a total of five months and involved almost fifty workers in total, including direct employees and external suppliers who worked in cooperation with the crew. The owner is now ready to cruise the Mediterranean.Morning Glory is the first of six Perini Navi boats to be launched this season. The remaining five are currently undergoing refits at the Lusben facilities in Livorno and Viareggio, planned for delivery to their owners in the coming weeks.Lusben, with over 60 years of experience in the yacht refit sector, boasts facilities at which know-how, organization, attention to detail, and hospitality make up the foundation for the company philosophy. To further expand the range of services, in 2004 Lusben acquired a new site in Livorno in order to be able to operate on yachts of 120 meters in length. Credits: Lusben
April 14, 2021 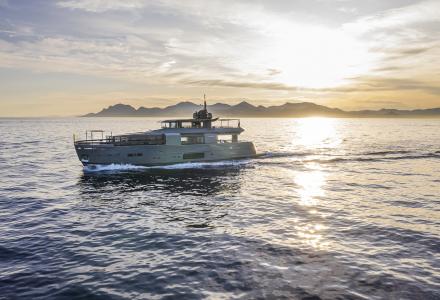 Image Gallery: Inside Sea Coral 2, the third hull of the Arcadia A105
Sea Coral 2 is the third hull in the award-winning Arcadia A105 series. Sea Coral 2 is a 31.5 m long, 7.76 m wide yacht. The hull and deck are built in fibreglass, while some of the veranda’s elements are made with aluminium. All this adds up with a full load displacement of 145 tonnes. The interior decor was created in collaboration with the owner's personal designer and the support of Milan-based Hot Lab firm. "Yet another achievement that underlines how, for Arcadia Yachts, furnishing does not simply mean placing a designer sofa or table on board – it means carefully choosing every detail to enhance the functionality and aesthetics of our yachts,” says Francesco Ansalone, Arcadia Yachts Marketing & Communications manager. "In the case of the Sea Coral 2, we enriched our experience working closely with the designer chosen by the owner and the professional support of Hot Lab design studio," he adds."Having carried out many prestigious projects in some of the most beautiful places in the world, such as Saint-Tropez, Paris, Formentera, Val d'Isère, Casa de Campo, etc. I had no doubts about accepting the task of working on board an Arcadia A105," says Alain Perrier, the owner's designer. “If there is one yacht that makes a difference, it is this one: low on the water, with a sleek profile and a modern design. The Arcadia A105 represents the art of experiencing relaxation, comfort and safety on board an exceptional yacht. That's why I wanted to preserve the spirit and concept of the shipyard, while adding the owner's personality through the decor."The open aft cockpit on the main deck is openThe living hall on the upper deckThe inner bow area of the main deck could be used either as an office or as a second VIP cabinThe large living area at the centre of the main deckAnother view of the main living area on the main deckOne of the twin guest cabins on the lower deck, where the entire sleeping area is locatedThe full-beam owner's cabinThe reverse view of the owner's cabin highlights the TV’s central position: the owner’s access to the bathroom is to the right, while the door to the left leads to the walk-in wardrobeAfter the first few months cruising in the Mediterranean Sea, Sea Coral 2 has crossed the ocean and is now in the Caribbean. Arcadia Yachts is based in Naples, Italy. Since 2008, they have been building semi-custom luxury composite yachts and have succeeded in perfectly integrating artisanal craftsmanship, modern technologies, attention to detail and to the surrounding environment. The Arcadia Yachts fleet has included two ranges since September 2016. The shipyard’s first and most characterising range is the A range, which includes four models (A85, A85s, A105, and A115).The Sherpa range has a new model, the 24m Sherpa XL, which was launched at the 2019 Cannes Yachting Festival. Credits: Arcadia Yachts/Alberto Cocchi
April 13, 2021
All news