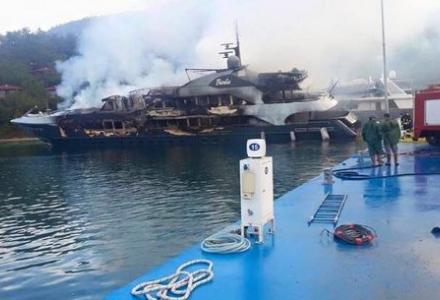 Reports have started coming that a large fire has broken out in Marmaris, Turkey causing extreme damage to The One and Barbie, two well known yachts. The fire reportedly took four hours to extinguish according to local media sources. The fire that has allegedly started at 02:00 AM has damaged the 52m M/Y Barbie and the 73m M/Y The One. According to Elliad Hagiladi of Yacht Marine, the fire started on the One before spreading to the Barbie. Other yachts stationed in the harbor have left the harbor to escape the fire. Fire fighters are currently pumping out water to prevent the yachts from sinking. The marina is however working at full capacity.

The One was built in 1973 by Lurssen and has a length of 71 meters. Arguably, the yacht has had a large influence on the megayacht industry and was designed by Jon Bannenberg. The design firm Bannenberg & Rowell said in a tweet that the yacht will be missed. The yacht was ordered by Helmut Horten, a German billionaire owner of a large supermarket chain. It was sold after his death to Francesco Gaetano Caltagirone by Horten's wife after he passed away and she took possession of the 97m Carinthia VII.

Barbie was built in 2006 by Al Jadaf and has a length of 52 meters with a design by Romeo Design. According to CNN Turk, the yacht was owned by formed Galatasaray President, Unal Aysal.

According to chatter on social media, the fire might have been caused by the explosion of an electrical installation on The One. According to a source close to the story, smoke was initially coming out of a piece of electrical equipment on The One and crew onboard tried to put out the fire but it spread out of control due to bad weather. No injuries have yet been reported.