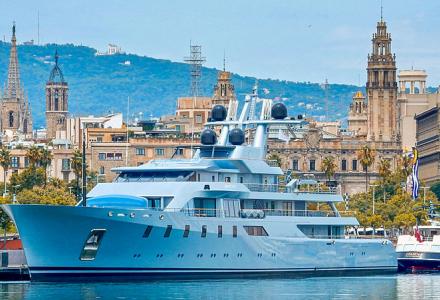 Previously known as Project Josi, Pacific is an impressive 85.2m luxury yacht, built by Lurssen shipyard in Germany at their Lemwerder shipyard and delivered to her experienced owner in 2010. 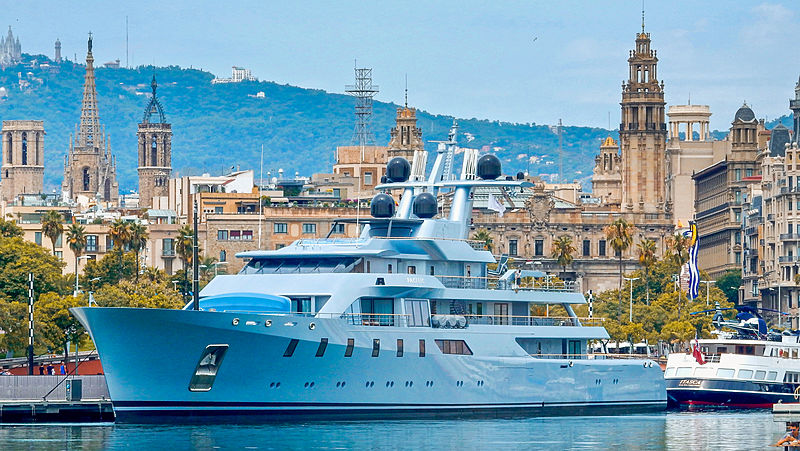 The yacht with her elegant unique color, which can change in the sun, was bought by Leonid Mikhelson. According to Forbes, he is the third richest person in Russia with a net worth of $17.1 billIon. However, the owner of Pacific was the richest Russian in 2016. 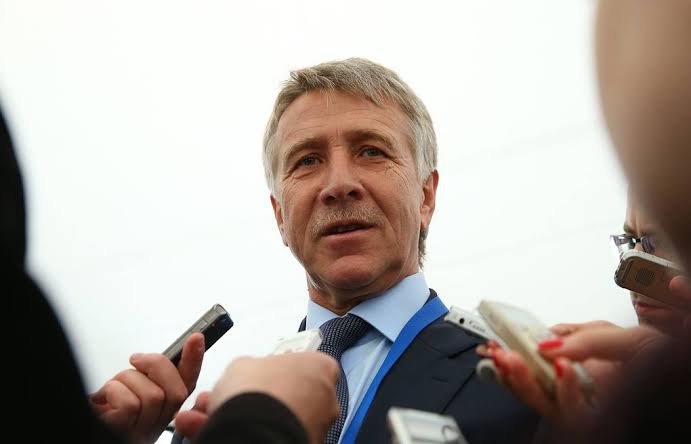 Mikhelson owes his wealth to stakes in natural gas producer Novatek and petrochemical company Sibur. The Russian billionaire is known as an art collector and he named a foundation after his daughter Viktoria. It is called the V-A-C foundation. 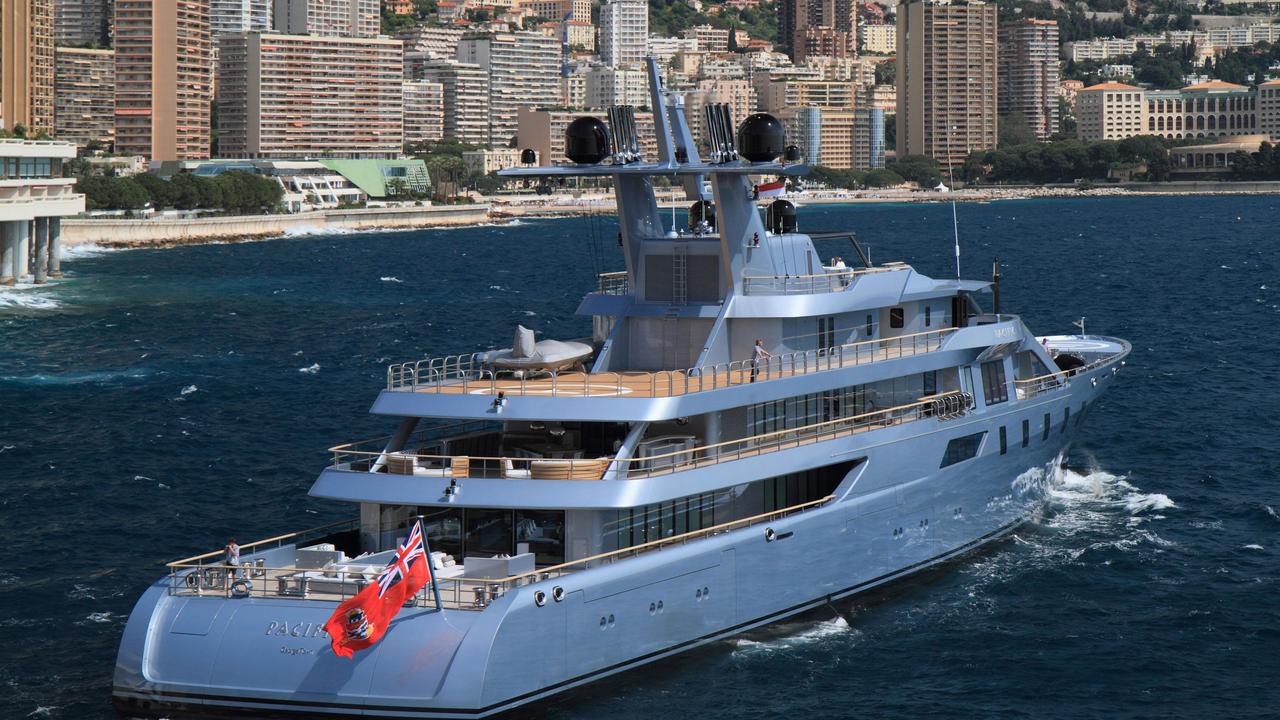 The last years Pacific has been all around the world: she has been spotted in Australia, Indonesia, in Florida and across the Caribbean, Pacific, and Mediterranean seas. 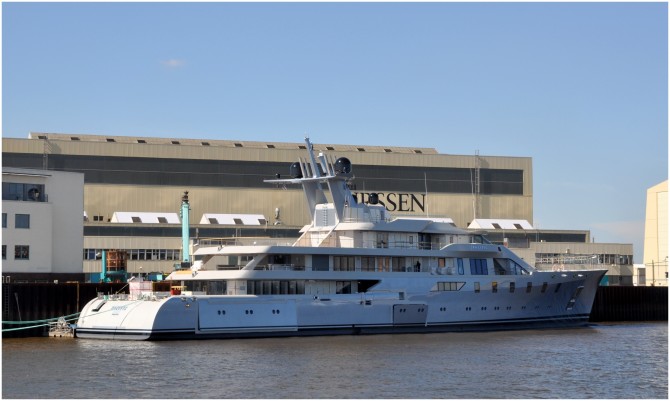 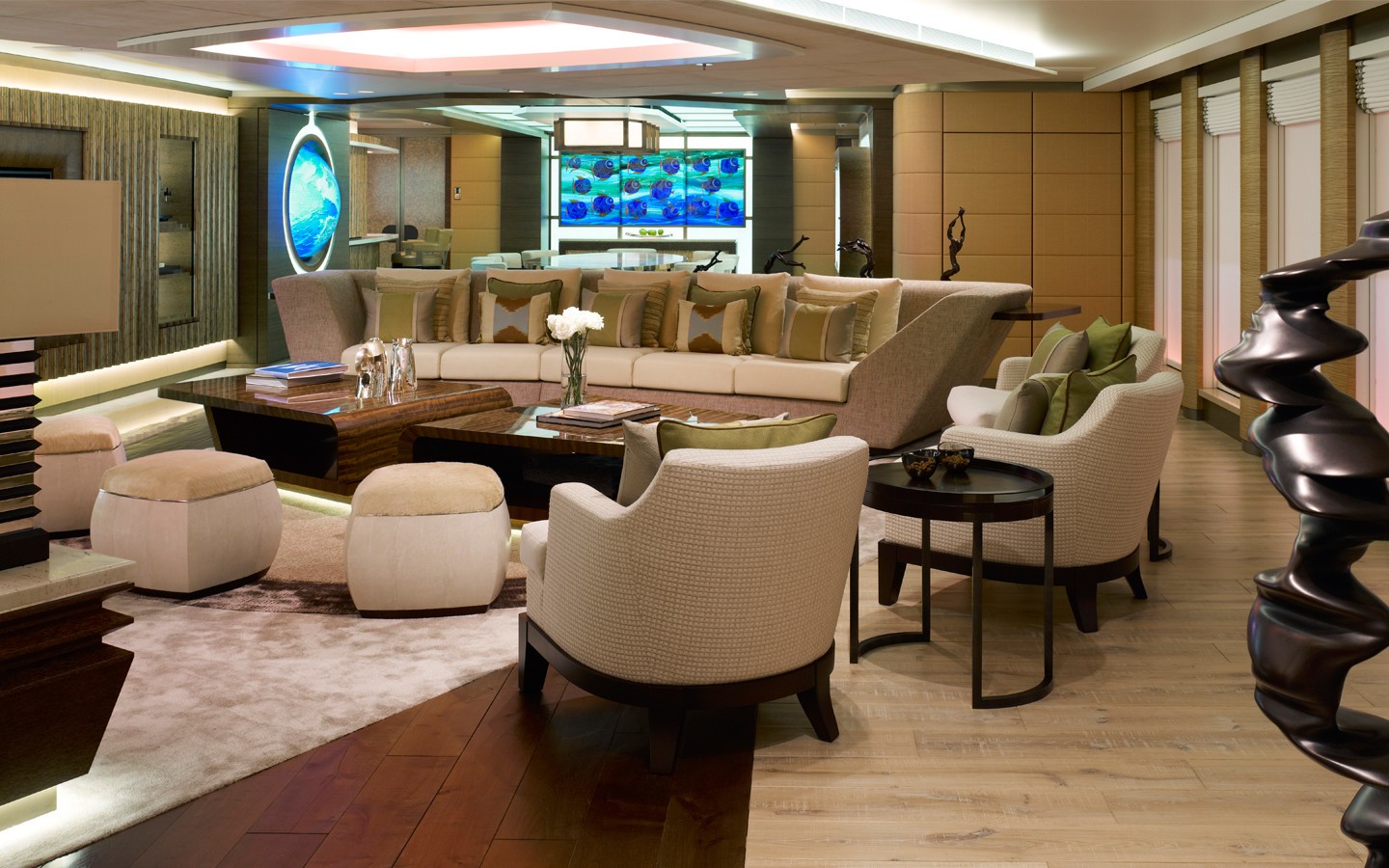 She can accommodate 12 guests in 6 cabins with a stylish interior design by Bannenberg & Rowell from London and a wonderful distinct exterior design by Argentinean architect German Frers known for sailing yachts. The superyacht is also capable of carrying up to 28 crew onboard. An elevator makes it easy to move between floors. Also, the yacht can accommodate two helicopters. 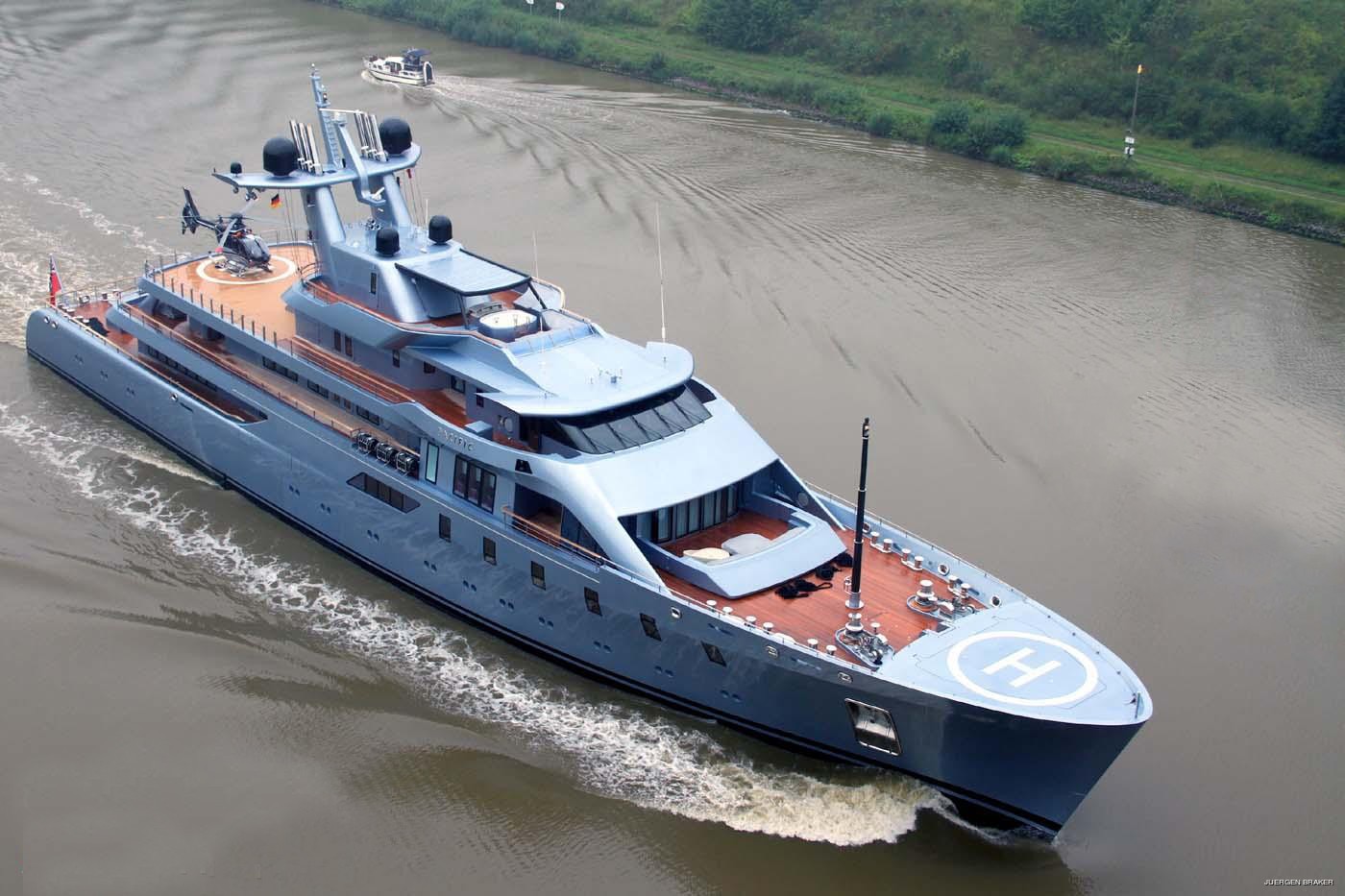 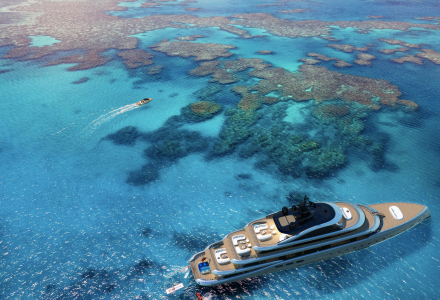 Inside 75m Kenshō
The 75m superyacht Kenshō was delivered by Admiral in July 2022 and immediately went to the Mediterranean sea for the summer season. This innovative vessel is the result of the collaboration between the ship owner, who personally followed the project, the French agence Jouin Manku, that designed the interiors and Azure Design, that developed the exteriors together with archineers.berlin. Her naval architecture was made by The Italian Sea Group. The design was developed mostly focusing on the environmental impact, respecting the “ECO” notation of the IACS; even the hull was designed to minimize the resistance through the use of Azimuth thrusters and retractable stabilization flaps.The yacht is equipped with an innovative “diesel-electric” propulsion system, with permanent magnet electric engines that provide high efficiency and strong power, with limited volumes. The propulsion system is equipped with five variable speed generators, all provided with an anti-particulate system to optimize the consumption at any speed and reduce emissions into the atmosphere. Kenshō can accommodate up to 16 guests and 20 crew members including the captain. She has a cruising speed of 13.6 knots and a top speed of 15.4 knots. Admiral Yachts – flagship brand of The Italian Sea Group, global operator of the international nautical industry, specialized in the construction of yachts and ships up to 100 meters. Present in the yacht market, Admiral has launched 147 yachts over the years. Since 1966 The Italian Sea Group has launched over 583 yachts.Credits: The Italian Sea Group
August 9, 2022 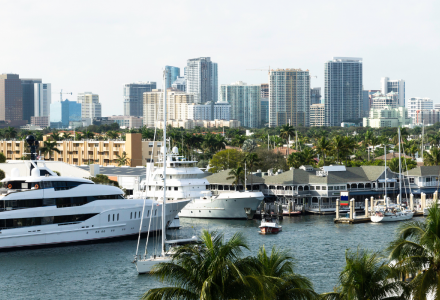 JMS Yachting Opens New Office in Fort Lauderdale
JMS has announced that Rick Thomas has joined JMS Yachting USA (JMS). Under the leadership of Rick the new Fort Lauderdale office will cater for the expanding JMS fleet and will deliver independent yacht management to superyachts and owners in the USA. Rick Thomas has been involved within the yachting industry for over 36 years in the south Florida area. Rick founded Nautical Structures back in 1986 and the business grew into a world leading global provider for quality lift and boarding equipment in the luxury yacht industry as well as supplying the commercial and military sectors.With Rick’s experience, longevity and technical knowledge of the industry as a whole, JMS will be delivering unrivaled yacht management to the USA market backed up by the experienced European team, who in turn will be spending far more time in the USA from this point onwards.Rick Thomas"I was looking for my next adventure within the superyacht industry and have known the JMS team for some time now. I've admired their approach to yacht management and when the opportunity came to work with Franc and the team in developing the state-side business, I jumped at it,” says Rick Thomas.Franc JansenCommenting on the opening of the USA office, Franc Jansen, the company Founder and Managing Director said: "During the past seven years we have seen tremendous growth in the number of yachts we manage. Our team has expanded accordingly and we were lucky to be able to hire the most knowledgeable and respected yacht managers in the business. Setting up the office in the USA was the obvious next step for us as a business. We are delighted to have Rick on board. Rick has a tremendous network and is well respected in the USA superyacht industry and beyond. Not only does Rick have a wealth of technical knowledge that we were looking for but, Rick’s personality was a perfect match for the JMS team. We're really looking forward to this next chapter in the USA.”Before that JMS Yachting had offices in Monaco, Brighton, UK and Mallorca, Spain.Credits: JMS Yachting
August 9, 2022 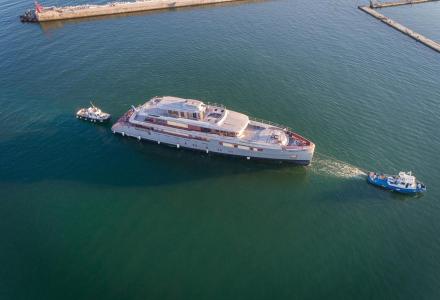 58m Hull C127 Technically Launched by Codecasa
Codecasa Shipyards has announced that the 58m hull C127 was technically launched at the Darsena dei Navicelli and moved from Pisa to Viareggio, where the yacht will be installed and completed for expected delivery in summer 2023.Little do we know about the yacht, except it was built on spec and has elegant and gritty features. The design is the result of the close co-operation between the Codecasa shipyard technical team and the design studio M2 Atelier of Milan.The superyacht can accommodate 12 guests between six cabins. She features a gym, a four meter swimming pool on the sundeck and a beach club with a folding door.C127 has a steel fast-displacement hull. The yacht is able to reach a maximum speed of 20 knots and will have a range of 6,000 nautical miles at 12 knots. Codecasa shipyards was established in Viareggio in 1825 by the shipwright Giovanni Battista Codecasa. Still run by the founder’s heirs, nowadays the Codecasa Shipyards Group is able to offer a wide range of Yachts, featured by top quality, technologic innovation, reliability, design and comfort. The shipyard is known all over the world as builders of steel and light alloy motoryachts, ranging from 30 to 70 meters LOA.Credits: @3design/Cantieri Navali Codecasa Facebook
August 9, 2022 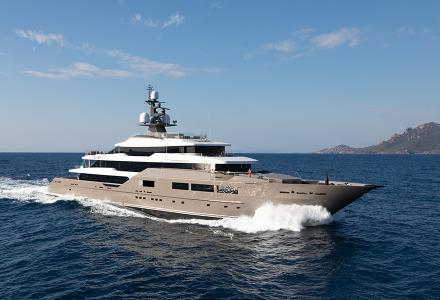 72m Solo Listed for Sale
The 72m superyacht Solo returns to the market after being sold in April 2021. She is listed for sale with Edmiston’s Tomaso Polli. Solo was delivered in 2018 by Tankoa. Her exterior was made by Francesco Paszkowkski, the Art Deco's inspired interiors were penned by Margherita Casprini. The motor yacht has won numerous awards – in 2018 Solo won Most Efficient Yacht at World Yachts Trophies and The Game Changer at the Boat International Design & Innovation Awards in 2019.She can accommodate twelve guests in six staterooms, and her master suite offers a 180-degree view from a king-size bed. This stateroom also is outfitted with a private terrace that features a whirlpool tube and a sunbed. The interior of this well-designed superyacht effortlessly flows onto her spacious decks, which offer the best of the alfresco lifestyle. Solo’s decks feature the most sought-after amenities available aboard luxury yachts, including a large beach club with a lounge, a bar sauna, hammam, shower and fold-out terrace, as well as a full gym and massage room. A six-meter infinity pool is found on the main deck aft. It is surrounded by lounge space. The bridge deck aft features a hot tub as well as a touch-and-go helipad that converts to a dance floor or open space ideally suited for on-board entertaining. Solo is equipped with twin CAT engines and has a range of 6,000 nautical miles at 12.5 knots. She can reach a top speed of 17.5 knots.Her asking price is EUR71,000,000. Tankoa was founded in 2007 and began production in 2008. A true “boutique shipyard”, focused on building semi-custom and custom constructions 45-meter and up.Credits: Tankoa
August 8, 2022 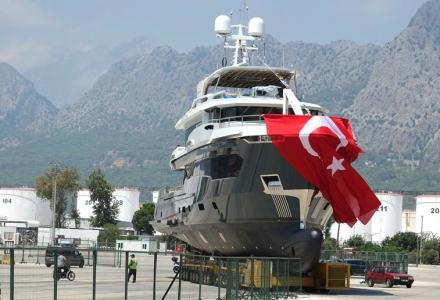 Kando 110 Infinity Nine Launched by AvA Yachts
On August 5 AvA Yachts launched the Infinity Nine in the Antalya Free Zone. The 35m yacht was built for the NBA star Tony Parker and became the second of the Turkish shipbuilder’s of Kando compact explorer series. Infinity Nine is set to boast a full-custom interior volume of 340 GT along with a 7.8-meter beam. She can accommodate up to 12 guests across six cabins, including an upper deck master with its own private deck. A crew of up to 6 accompany them. The yacht features an extended swim platform at the stern, and gym on the upper deck.Built to a steel hull and aluminum superstructure with a bulbous bow, the explorer has a maximum speed of 14 knots and a range of 6,000 nautical miles, thanks to the power of twin Volvo-Penta 650 hp engines.“This is such a proud day for the whole team at AvA Yachts and everyone involved with the construction of Infinity Nine. She is testimony to the outstanding skills of all the workers we have here in Antalya and a truly superb example of AvA Yachts’ exciting Kando series of contemporary explorer yachts,” says Atilla Küçükdiker the chairman and founder of AvA Yachts. Infinity Nine will make a debut at the Cannes Yachting Festival in September.AvA Yachts was established in 2005 as a naval architecture and engineering company by a group of naval architects who have experience of more than 25 years in the yacht design and engineering field. Ava Yachts has developed and engineered the designs of many remarkable yachts in a wide variety. Today AvA Yachts, with more than 5000 sq.m closed yard based in Antalya.Credits: AvA Yachts
August 8, 2022
All news