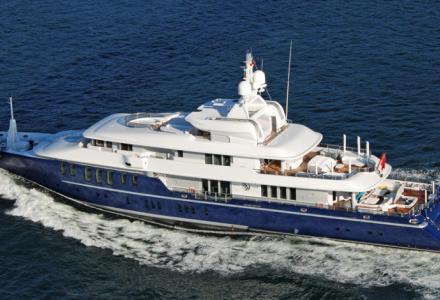 Russian billionaire Alexander Abramov is the owner of 68-metre yacht Triple Seven. He is one of the two heads of Evraz company with net worth of $5,6 billion. Triple Seven was listed for sale through Burgess with the asking price of € 44,900,000 in March, 2018. In 2013 Alexander Abramov bought Triple Seven for €39,750,000. She is a winner of 2007 International Superyacht Society Awards in Best Power 43m+ category.

Triple Seven is a 68-metre yacht built by German shipyard Nobiskrug in 2006 with a build number 777. The yacht boasts minimalistic interior by Newcruise Design that flows seamlessly through to her abundant outdoor spaces. With an expansive beach club, large sundeck jacuzzi, custom storage and provisioning solutions and extensively equipped garage including a dive room, a 8 and 9-metre and tenders (and much more), she is equally at home in the cruising grounds of the Mediterranean, or exploring more remote regions of the Pacific. Triple Seven underwent a refit in 2014 and her owner has invested significantly in her maintenance, including a full repaint at Pinmar in 2016.
Facebook
Twitter
Google+