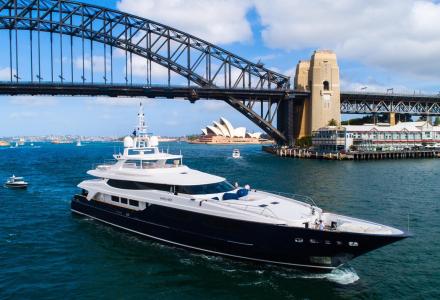 Mischief, the 54-meter Baglietto, is now available for charter in Sydney through Ahoy Club. This follows the yacht being transported from the Mediterranean earlier this week. Mischief becomes the largest commercial yacht ever imported into Australia. 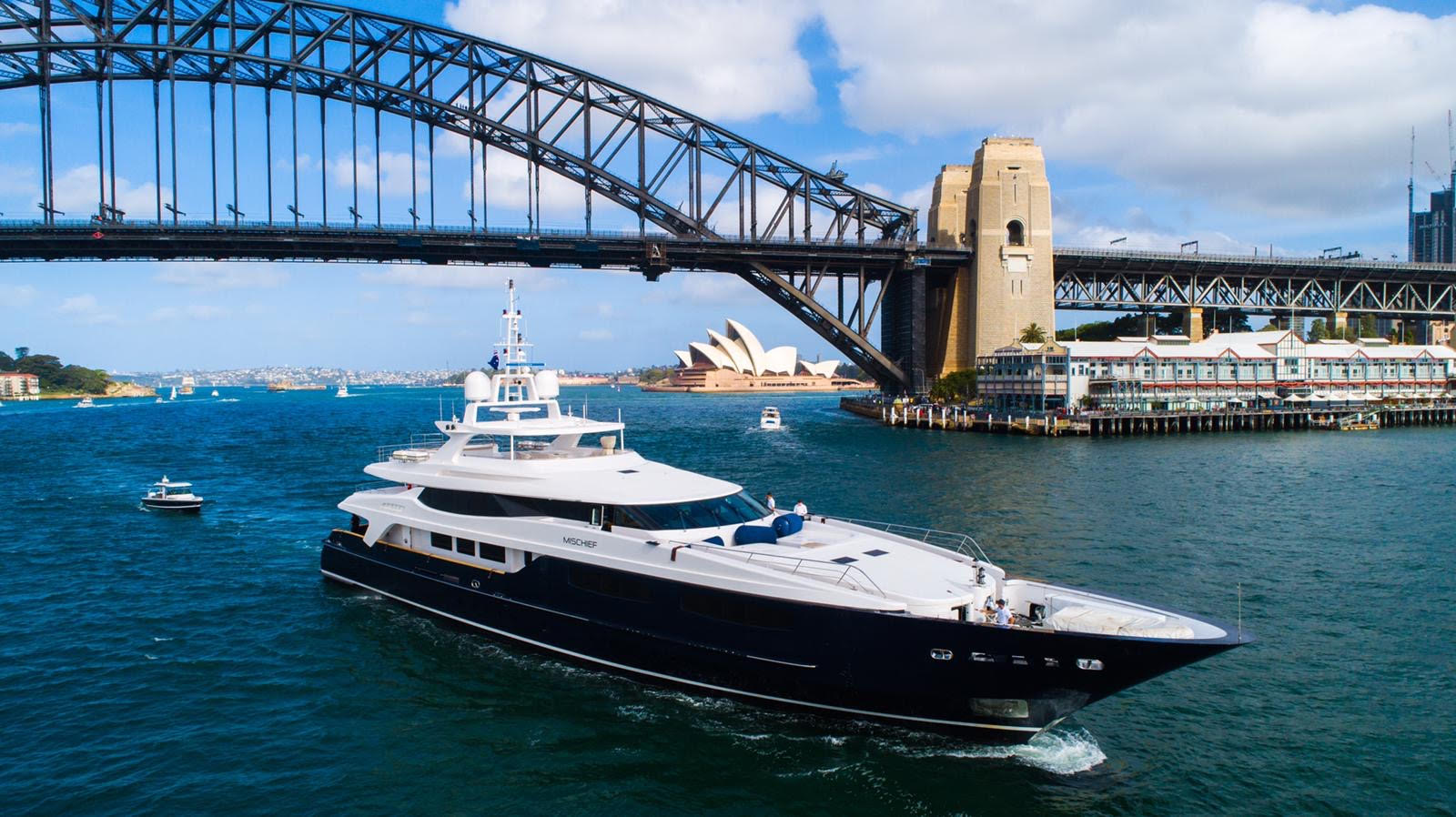 Photo by @sxmluke
News of her transport to Australia follows Ian Malouf, her Australian owner, purchasing a 73-meter yacht in 72 hours at the Monaco Yacht Show. His new Lurssen, Coral Ocean is set to continue its charming history and charter excellence through Ahoy Club in the Med after a new refit.
"It will be the largest commercial superyacht ever brought into the country" commented Ian Malouf. "Mischief will show what seven-star service is all about. It's a good addition to Sydney Harbour." 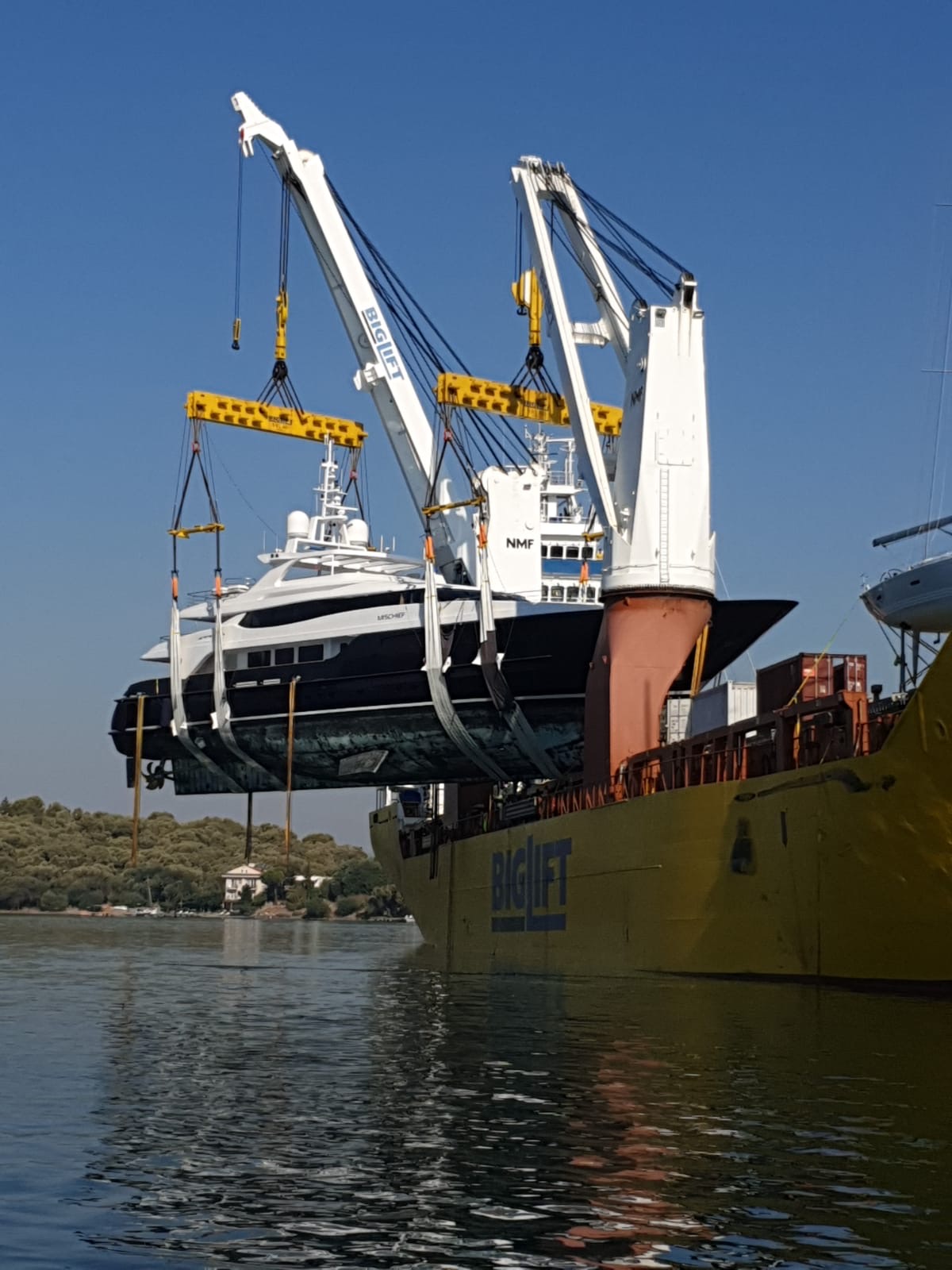 54-metre superyacht was launched in 2006 by Italian shipyard Baglietto and was regularly refitted, with the latest in 2018. With newly painted French Navy hull and white boot stripes, her racy lines cuts a sleek form on the water. Her interiors are just as special - the dramatic use of white reflective surfaces accented with blues and blacks gives her a real sense of identity. 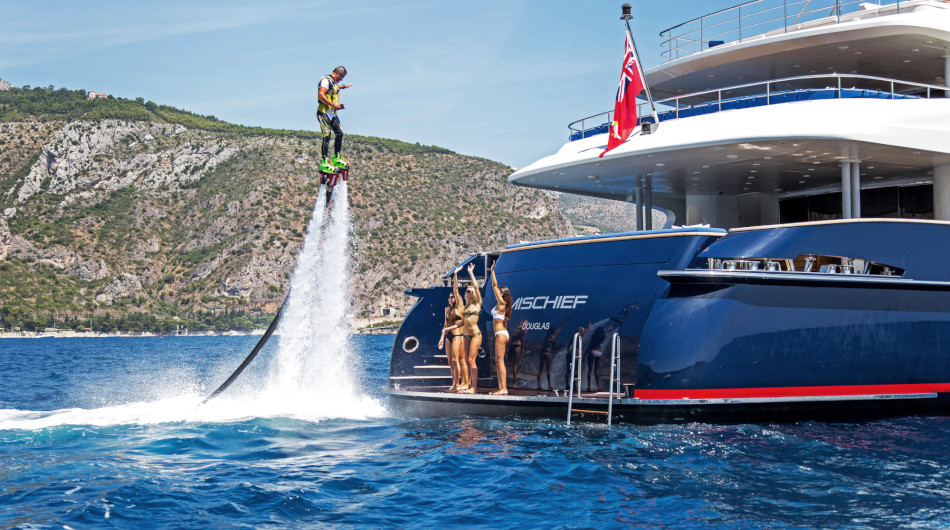 Malouf’s interest in yachting goes beyond yacht ownership. Last year, together with his daughter Ellie, after four years of preparation they launched Ahoy Club, a digital marketplace of yachts for charter allowing users to book any yacht, anywhere in the world, for the best possible price by reducing commissions through an improved tech stack, that instantly presents users with the choice of over 3,300 yachts available for charter worldwide. Ahoy also handles yacht sales with reduced fees.
Earlier this year, Malouf took his vision for simpler charters and more affordable prices to private aviation, co-founding Central Jets The web platform lets users book flights at direct pricing from owners through a simple €199/month subscription. This has allowed users to save up to 50% per flight. The company guarantees the lowest priced jets in the market.
Facebook
Twitter
Google+

The design secrets of the world’s largest superyacht Azzam
Lürssen shipyard delivered 180 metre superyacht Azzam in 2013. With such an impressive length, she is the largest privately owned superyacht in the world and held its title unchallenged for nearly seven years. With a beam of 20.8 m and a draft of 4.3 m, she has a steel hull and aluminum superstructure. This adds up to a gross tonnage of 13136 tons. Azzam is powered by engines of 23,500 hp each giving her a maximum speed of 30 knots.The all-white motor yacht can accommodate guests in cabins with an interior design by Christophe Leoni and an exterior design by Italian studio Nauta Design.Mario Pedol, co-founder of Nauta Design commented:Azzam features balanced, modern architecture composed of straight lines and proportional volumes, which are some of the main design principles of Nauta Design When we were called to participate in pitching for the exterior styling of this yacht we knew it would be the most demanding work of our career, defined by the strictest and most challenging requests in terms of dimensions, performances, and technology. What made us confident to be able to deal with such a challenge was the interpretation of the client’s brief. The best technology was required in order to obtain the highest performance possible.There is not much information about her interior design, but it’s not a secret that the interior layout includes an open-plan main saloon measuring 29 metres by 18 metres.Pedol said about it:We’ve had a lot of compliments for Azzam. They all talk about elegance and balance, that she doesn’t look as big as she is, and I think this is a good achievement.
July 9, 2020 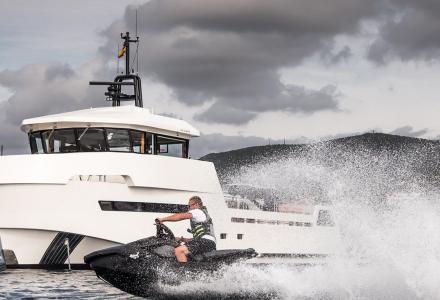 New delivery: The 27.3m yacht Roe Shadow built by Lynx Yachts
Dutch shipyard Lynx Yachts is happy to announce the delivery of the 27.3-metre motor yacht Roe Shadow to her owner in the Netherlands after successful sea trials out on the North Sea.She is the second YXT 24 Evolution model by the shipyard with an all-Dutch design. The vessel’s naval architecture was created by Diana Yacht Design and her exterior design by Bernd Weel with a minimalistic Scandinavian interior by Darnet Design. The YXT 24 Evolution is a model developed with a clear objective: to deliver more for owners. Filippo Rossi, Lynx sales and marketing manager commented:We are very proud of this new vessel and want to express our special thanks to the whole team involved in the construction.In particular, we also want to thank the owner, his representative and ACP Surveyors, for the great cooperationduring the lockdown and this unprecedented period, we are all facing.There is an impressive 24-square-metre beach platform on the lower deck with direct access to the sea. The 100-inch outdoor screen gives opportunities for amazing movie nights or sporting events. The versatility of this yacht makes it easy to stow whatever an owner wants.The 24-square-metre main deck offers 9.8 metre Pascoe beach lander, two Sea Doos, and a knuckle boom crane with a load capacity of 3.930 tonnes.She is powered by two 800hp MAN engines and has a cruising speed of 12 knots and a top speed of 13 knots.
July 9, 2020 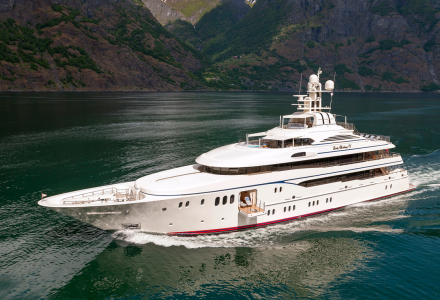 Inside the 61m Lurssen luxury yacht Lady Kathryn V
An exceptionally spacious 61 m luxury motor yacht, Lady Kathryn V was built by famous German shipyard Lurssen and delivered in 2011. The yacht with a defining racing-red stripe along her hull has the exterior design by the renowned Espen Øino. Her classical and elegant interiors were created by Adam Lay Studio to a unique nautical theme: stripes in blue and whites, complemented by rich woods, give her a classic look and feel.Most impressive areas on Lady Kathryn V include the sunbathing area, enabling views far out to the sea from the sunpads. There’s even a private golf driving range. Additionally, she features a full gym and a water toy box. Lady Kathryn V has two sea kayaks, two stand up paddleboards, two jet ski’s, two seabobs, inflatable tubes, water skis, wakeboards, and two 23′ tenders.With a beam of 11.4 m and a draft of 3.6 m, she has a steel hull and aluminium superstructure. She is powered by Caterpillar engines of 1980 hp each giving her a maximum speed of 15.5 knots and a cruising speed of 12 knots. Lady Kathryn V's maximum range is estimated at 7000 nautical miles.The motor yacht can accommodate 12 guests in 6 cabins including a forward owner's suite complete with a sea terrace, with a crew of 14 members.
July 8, 2020 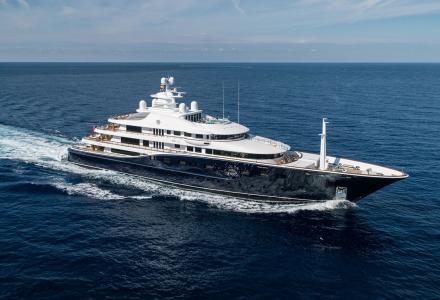 A look inside the 12-month refit of 85.6 m superyacht Aquila
Aquila is a 85.6 m luxury motor yacht. Launched by Derecktor Shipyards in Bridgeport, Connecticut in 2010, she has recently undergone an extensive 12-month refit program. Aquila is designed by Tim Heywood with the traditional interior by Elizabeth Dalton of Dalton Designs. Now her original interiors were replaced by a new design courtesy of Redman Whitely Dixon. Tony Dixon, director at Redman Whitely Dixon, commented: We selected a mix of dark wood finishes, pale leather panels with nickel trim and many new special surface materials all interplaying together to offer subtle style variations throughout the interior.The interior was remodeled to ensure a smooth flow between each area, the installation has been carried out by German interior specialists Metrica.She is currently the largest private yacht ever constructed in the United States by volume and in 2016 she became the largest yacht ever refitted in the UK. The refit consisted of a complete revitalization of all five deck levels. Aquila was definitely reborn after such massive recondition at Falmouth-based shipyard Pendennis. The project team refurbished all of the social spaces, overhauling the technical systems, and renewing the interior of over 750 square metres.The yacht, owned by Charles and Diane Gallagher, has a beam of 14.3 m and a draft of 4.2 m. has a steel hull and aluminium superstructure. This adds up to a gross tonnage of 2998 tons. She is powered by MTU engines of 3306 hp each giving her a maximum speed of 18 knots and a cruising speed of 15 knots. During the refit, her four generators were completely rebuilt and other upgrades included new radar equipment, AV and IT systems, air conditioning, fresh air handling systems.The motor yacht, which can accommodate 14 guests in 7 cabins, how has got a brand new glass chandelier by Susan Young. With more than 850 pieces of hand-blown glass, this masterpiece centerpieces cascades 11.2 metres through four of Aquila’s five decks.Other improvements include a reconfiguration of the owner's suite together with a 60m2 private deck area and repositioning of the Jacuzzi to the forward deck. Their guests can also enjoy a movie on a 98-inch widescreen cinema store into a floating box to prevent sound and vibration emissions.For this expensive refit, Aquila has already won the Neptune for Best Refit at the World Superyacht Awards in 2017.
July 8, 2020
All news