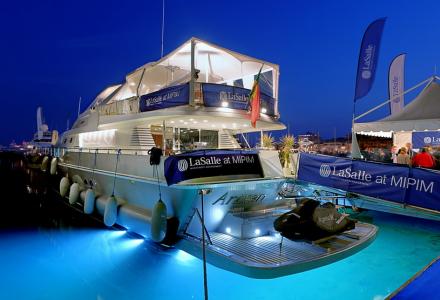 How to charter a yacht for MIPIM

Annually hosted at the Palais des Festivals in Cannes, MIPIM brings together the most influential international players from across key property sectors for four days of intense networking. More than 3000 exhibitors from 70 countries are expected to attend the event, taking place between 13 and 16 of March 2018. 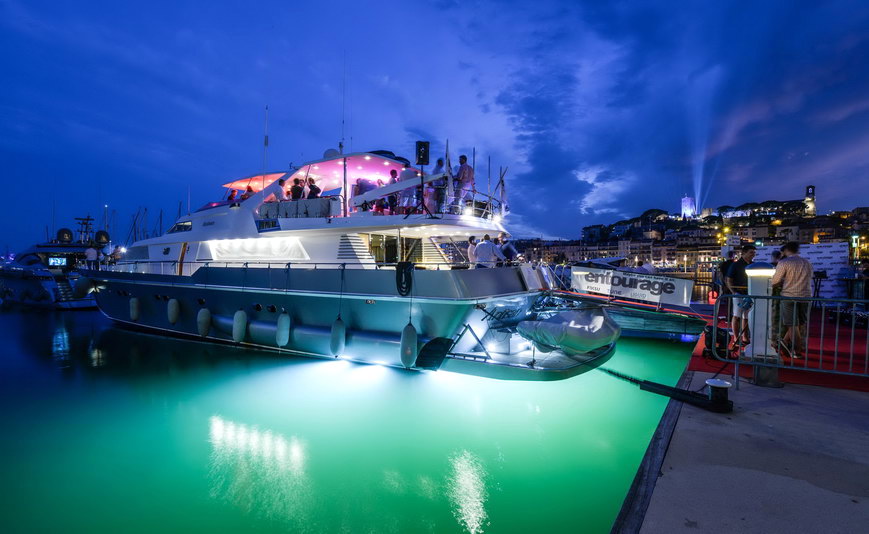 Ahead of this arguably most important property exhibition, a yacht charter at MIPIM brings the perfect all-in-one solution for businesses in search of accommodation, venues for meetings and presentation space.
Since chartering services are traditionally in high demand at MIPIM, Bespoke Yacht Charter brokers warn that early November is the last call for booking in order to secure the availability of yachts and, most importantly, ensure preferable berthing location on the Jetée Albert Edouard right next to the Palais des Festivals. When moored at the heart of the event, luxury yachts are set to act as high-profile settings for brands to showcase themselves through the use of banners, flags and other merchandise. 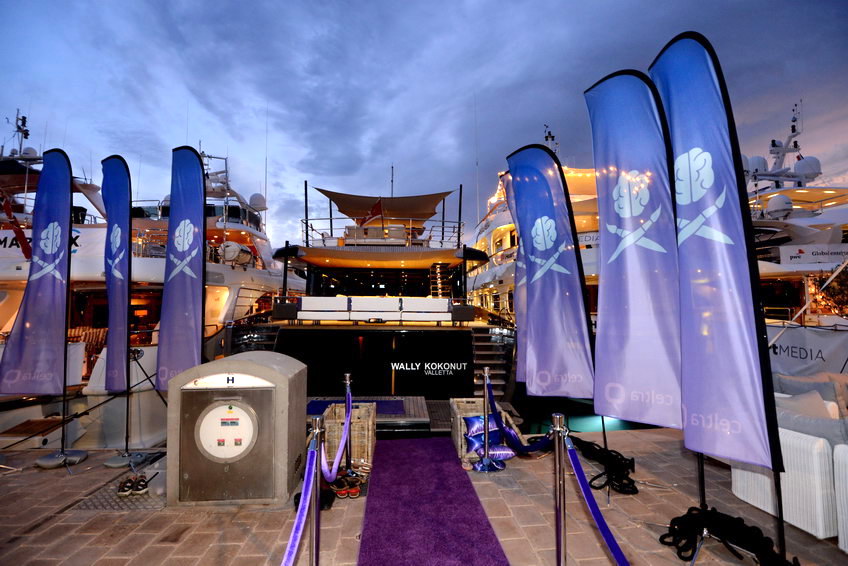 Furthermore, from the standpoint of accommodation, event charter provides a major degree of comfort in comparison with overbooked and unreasonably costly hotels or apartments for rent. Some luxury yachts have enough living space for up to 30 guests, thus, placing the whole team in a collaborative and exciting environment. Yachts of this size act as floating offices with various areas for almost any event format, from a quiet coffee meeting on the aft deck through to a full presentation on the aft deck with high-tech A/V equipment. Yacht crew will be there at hand to serve meals or even arrange a full buffet lunch for 60 people, which is a nice alternative to booking tables at crowded restaurants. Finally, yachts offer an ideal entertainment platform for glittering cocktail parties with a guest list of virtually any length. 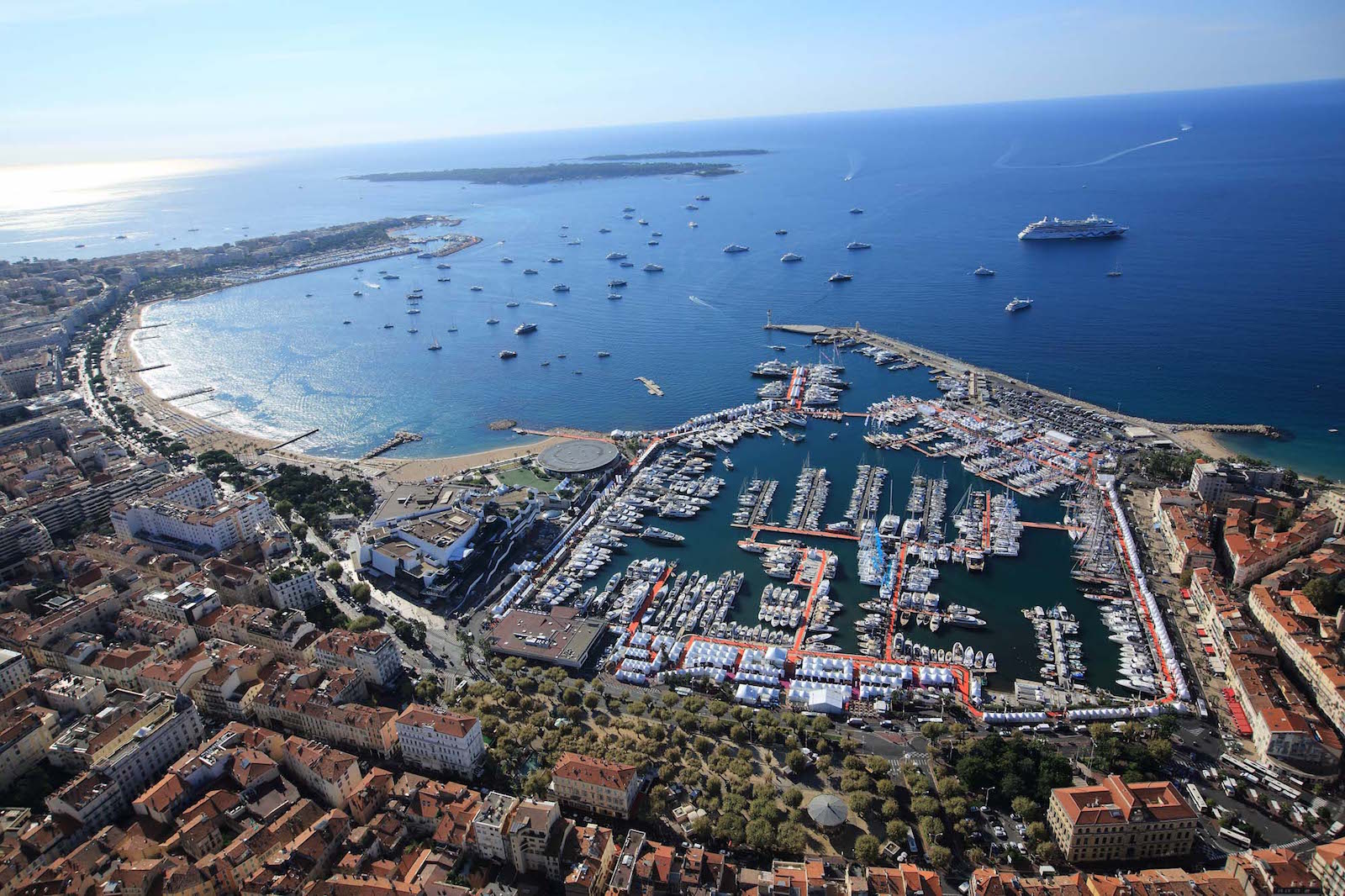 Using a combination of the yacht and the quay, we have arranged cocktail parties at MIPIM for in excess of 500 people!

Alexander Coles, Charter Broker, Bespoke Yacht Charter
Thanks to 15 years of experience with Cannes event charters, Bespoke Yacht Charter can handle any issue. The service on a turnkey basis may include outside catering, DJs, photographers, live music, and transfers, as well as assistance with MIPIM apartment and villa rentals for those delegates unable to sleep on the yacht.
Sponsored by Bespoke Yacht Charter
T. +44 20 7368 3328
E. info@bespokeyachtcharter.com
Facebook
Twitter
Google+ 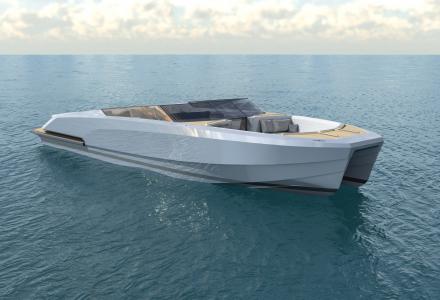 Cockwells Celebrates 25th Anniversary With Launch of 9m Modular Tender and Concept for 13m Open Catamaran Tender
As Cockwells Modern & Classic Boatbuilding celebrates its 25th year of building beautiful bespoke craft for a discerning clientele, the acclaimed British boatbuilder continues to share its unstoppable flair for distinctive design with the unveiling of its 9m Modular Tender at this year’s Monaco Yacht Show (MYS21), which takes place in the Principality from 22 to 25 September.For superyachts that require a flexible craft for use by guests and crew, Cockwells’ new 9m Modular Tender features ingeniously-designed custom modules that are lowered on board a base boat to transform it into a luxurious enclosed limousine; a fast guest transfer shuttle with jockey-style seating for up to 12 guests; a beach club with DJ station and BBQ grill; or, indeed, any other bespoke module to match precise specifications.With a proven seaworthy hull that makes for a comfortable ride, the 9m Modular Tender’s twin 200hp diesel engines possess the power to transport a small car or all-terrain vehicle at 44 knots whilst an electrically-operated integrated bow ramp allows easy boarding and loading from ship, shore and sand.Cockwells will also reveal its concept for a 13m Open Catamaran Tender at the event, which combines expansive open seating areas for relaxation with stable, fast ride characteristics to deliver the ultimate superyacht tender or luxury day boat.Based on our existing well-tried and tested catamaran hull, and paired with twin 725hp Volvo D11 engines driving Hamilton Jet drives to offer a top speed of 50 knots, this exuberant addition to Cockwells’ portfolio delivers clean lines and superyacht-quality finish to create a craft that will turn heads wherever she ventures.A bow ramp that folds hydraulically and a raising t-top Bimini which lowers electronically for stowage in the mothership’s garage can also be incorporated as optional extras.A confidential 12m version of this Open Catamaran Tender is already in build at Cockwells’ Mylor Creek Boatyard in Cornwall and is due for launch later this year.“We mark our 25th year in business as a reputable brand, a growing company that is globally respected and one of the largest and most well-established tender builders in the industry,” comments Founder & Managing Director, Dave Cockwell.Cockwells Modern & Classic Boatbuilding is based in Mylor Creek Boatyard near Falmouth in Cornwall, at the westerly edge of the UK, build bespoke superyacht tenders, motor launches and sailing yachts in any material.Credits: Cockwells Modern & Classic Boatbuilding
September 17, 2021 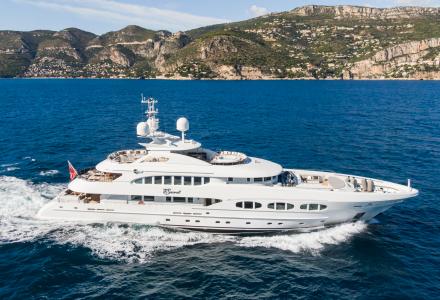 TWW Yachts Announced Sale of 47m 'My Secret'
My Secret is a 46.71 meter luxury motor yacht. She was built in Netherlands by Heesen Yachts and delivered in 2012. She has been just recently sold, with Hakan Altinel of Altinel Shipyards representing the buyer and David Westwood at TWW Yachts representing the seller in the deal.My Secret was asking € 19.5 million and spent about 20 months on the market.The yacht design was developed by Bannenberg & Rowell and Omega Architects.The hull is made of steel and the superstructure is made of aluminum, with a beam of 8.83 m and a draft of 2.85 m. This adds up to a gross tonnage of 491 tons.She is powered by MTU engines of 1340 hp each giving her a maximum speed of 15 knots and a cruising speed of 12 knots. My Secret's maximum range is estimated at 4200 nautical miles.She is ready to receive in six luxurious cabins up to twelve guests, surrounded by the care of nine crew members.Founded in 1978, the famous Dutch shipyard is located in Oss. Heesen Yachts during its work, has produced more than 170 yachts.
September 17, 2021 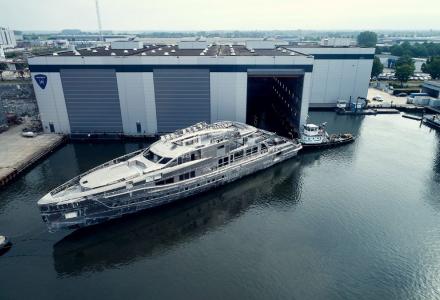 Main Engines Installed on the 60m Project Skyfall
Heesen has shared the news of the next major step in the construction of the 60m, all-aluminium Project Skyfall, YN 19959. In a complex operation over several days in September, three large mobile cranes lowered the main engines onto their mounts, and then hoisted the superstructure into place over the waiting hull. The exterior of this high-speed vessel is a sport fisherman in yacht disguise, complete with cockpit, fighting chair and storage for 40 rods was created by Frank Laupman of Omega Architects. When it came to selecting the hull colour, Heesen and Omega Architects narrowed the choice down to five, all from Awlgrip’s long-lasting palette of high performance, high gloss, durable marine coatings: Vestal White, Eggshell, Desert Tan, Ice Blue and Medium Gray.Skyfall’s owner wanted something out of the ordinary, but not too drastic. He chose ‘Desert Tan’, described by Awlgrip as “calming and low key, this is a subtle and luxurious shade. Yellowy in its base tone, it suggests a vast desert landscape where adventure beckons.” When complete in 2023, Heesen’s most powerful yacht to date will be accompanied by a custom tender, built by Vanquish to a Guido de Groot design that will mirror the mother ship down to the last brushstroke. Her Fast Displacement Hull Form is optimised for performance and efficiency and has gyro stabilisers and interceptor trim plates to maintain the correct running angle under way. SkyFall will be able to reach a top speed of 37 knots in light load conditions, thanks to the 22,000 horsepower produced by four MTU 20V4000 engines driving four Kongsberg S90 water jets.Project SkyFall will now remain in shed number nine for outfitting until Spring 2023 when she will leave the harbour of Oss for intensive trials in the North Sea.Heesen Yachts is a Dutch ship building company that specializes in custom-built superyachts in aluminium and steel from 30m to 70m in size. Founded in 1978, it has launched more than 170 yachts since its inception.Credits: Heesen Yachts
September 17, 2021 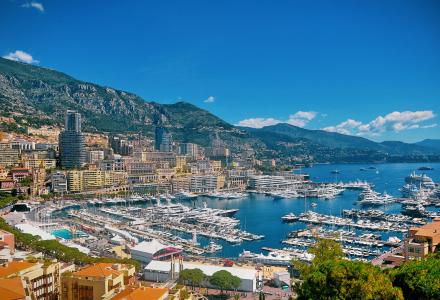 Denison Yachting Will Open Its First European Office in Monaco
American company Denison Yachting will not only attend the 29th annual Monaco Yacht Show with 47m Heesen yacht Asya, but also has announced its plans to open an office in Monaco as part of a larger European expansion; it will be the first office that Denison will open in Europe. The new Monaco office will be led by Jeremy Roche who has a respected history in the superyacht industry and the skills to lead a new team. Denison plans to open its new Monaco office in Fall of 2021.“We’re excited to build on the brand that Denison established in the United States, and to service U.S. clients who may own yachts in the Mediterranean,” commented Superyacht Director, Ben Farnborough. “It also provides the opportunity to expand Denison’s yacht management, charter division, crew placement, and brokerage reach by being on the ground in Monaco with a foot in the door in Europe.”Denison Yachting has long been a leader in the yachting industry, with a rich family history dating back to 1948 with the start of Broward Marine in Fort Lauderdale, Florida. Today, the company provides complete yachting services worldwide, from sales and charters to yacht management and new construction. Credits: Denison Yachting; Unsplash.com
September 16, 2021 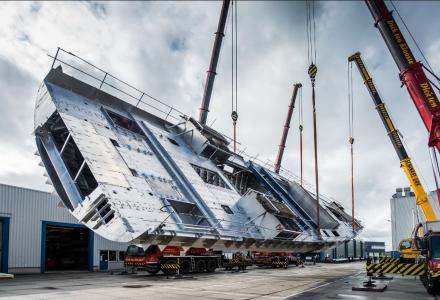 Important Hull Turning for Royal Huisman’s 46m Project 405
Royal Huisman has turned the 46m performance cruiser, project 405 aka Reichel / Pugh – Nauta 151. The turning of the modern performance hull at Royal Huisman’s newbuild facilities is an important milestone in the build process. It marks the start of the outfitting, during which various carefully selected and especially developed components will be fitted to ensure that this vessel will be both extremely lightweight and – compared to existing carbon composite superyachts – very competitive in regattas.At the same time, this radical new concept will offer all the benefits associated with existing Royal Huisman yachts: comfort, low noise levels, and optimal world cruising characteristics. The modern and powerful hull shape of Royal Huisman project 405, with its straight bow, wide transom, and twin rudders, capably embodies the naval architecture and hydrodynamic design by Reichel / Pugh Yacht Design, who have an impressive reputation for creating high-performance designs. The construction on the inside is based on the optimal use of the materials. For example, the hull of project 405 is a high-grade mix of aluminum and carbon composite, utilizing a semi-automated parametric structural optimization process. During sixteen iterations that are part of the shipyard’s new “Featherlight” method, the structural weight is reduced with an admirable 11% compared to conventional methods, whilst maintaining stiffness of the hull and ensuring structural integrity. The trunk for the retractable keel, the deckhouse, guest cockpit and hardtop will all be carbon composite, and are currently being manufactured “next door”, at Rondal. The shipyard’s sister company is skillfully bringing to life, the intriguing shapes envisaged by Nauta Design, who are responsible for the yacht’s general concept, exterior and interior design.In addition, Rondal and its partners are working on optimizing the yacht’s performance by applying various innovations to the yacht’s integrated sail handling system, such as carbon electric captive winches, and the state-of-the-art Panamax carbon rig. The latter was developed with structured luff sails in mind from the outset: reducing the load on the hardware means that the rig can be significantly lighter, as well. This will be the first large newbuild yacht to launch with a configuration based on this method of rig design and engineering. Royal Huisman project 405 will be delivered to her owners in 2022. Royal Huisman is a Dutch shipyard established in 1884 in Ronduite, building and refitting custom luxury sailing and motor yachts at its shipyard in Vollenhove, the Netherlands.Credits: Royal Huisman
September 16, 2021
All news