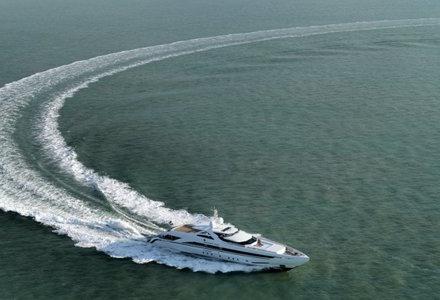 Heesen Yachts is proud to announce that after intensive sea trials in the North Sea, the 45m superyacht Amore Mio has been delivered to her owners in international waters as scheduled. The vessel represents the largest and most powerful sports yacht ever built in the Netherlands. The sea trials took place from January 18 to 21 in southeasterly prevailing winds and waves of 0.5 to 1 metres. Powered by twin MTU 16V diesel engines, the superyacht reached a maximum speed of 30 knots.

Amore Mio's Captain, Tripp Hock, commented: "Heesen added a third day to their standard sea trial program, which they are calling the Captain's Day. This was a welcome addition and allowed me free scope for requesting all kinds of further testing like crash stops, dead ship operations and single engine maneuvering. As the first Heesen sea trialed at 'light load', I was eager to see in particular how the gyro stabilizers would function on such a buoyant ship in the North Sea. To my relief, all the coffee cups stayed on the tables."

Designed by Cristiano Gatto, the interior of Amore Mio represents a perfect mix of contemporary style and sophisticated elegance all blended in a very cosy environment. The fabrics on board are by Loro Piana who-encouraged by Cristiano Gatto - developed a special textile that is used throughout the yacht.

As for the performance, the superyacht is powered by two MTU 16V diesel engines and has both advanced gyro stabilizers and active interceptors working to give the best possible sea keeping conditions.

With a range of 2,750 nautical miles at 12 knots, she can cross the Mediterranean with ease or cruise the entire length of the Caribbean from St. Barths to Grenada, stopping off at as many islands as one chooses on just one tank of fuel.

Amore Mio is the first yacht to be delivered by Heesen in 2016. Later in the year two more will follow: the 70m flagship Project Kometa, and the 50m semi-displacement Project Akoya. The shipyard currently has ten yachts under construction.
Facebook
Twitter
Google+