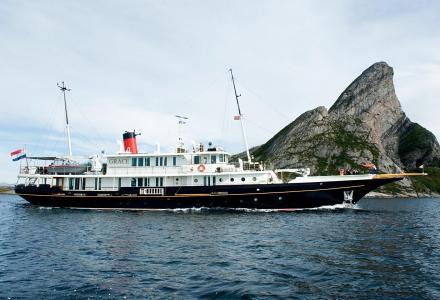 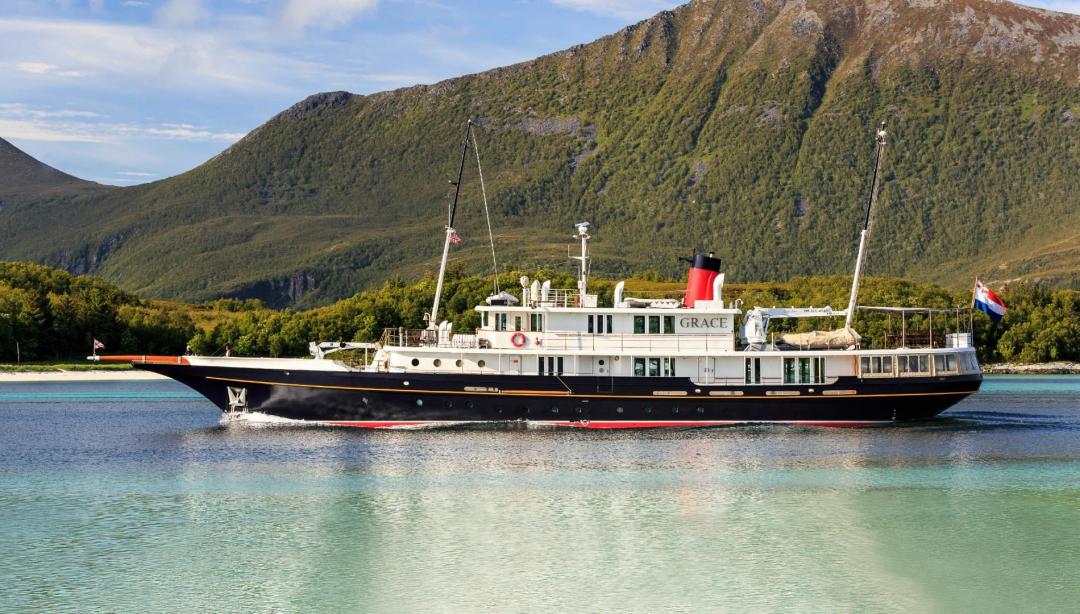 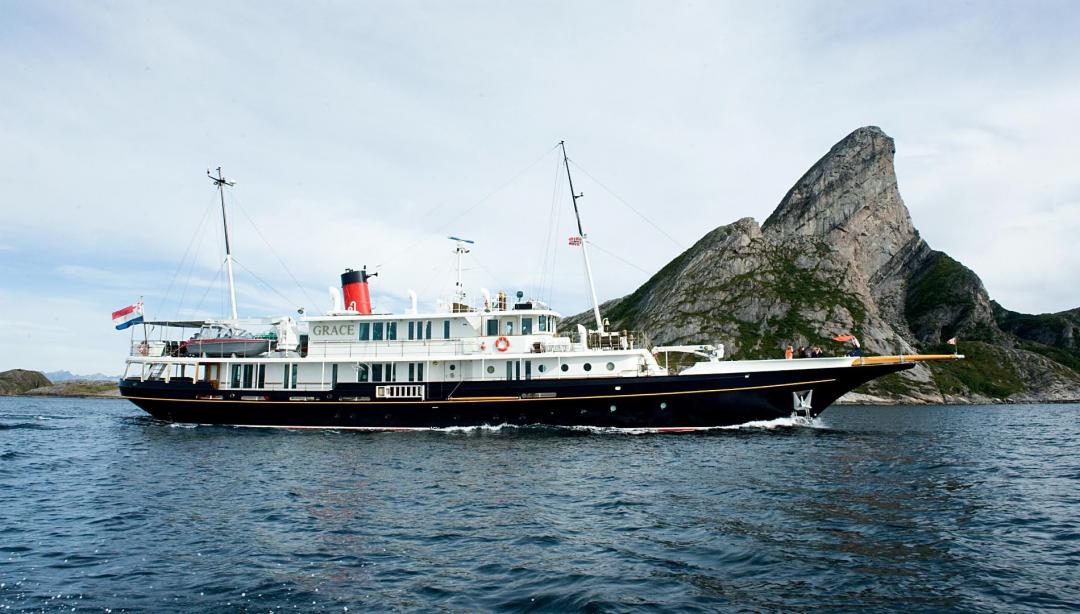 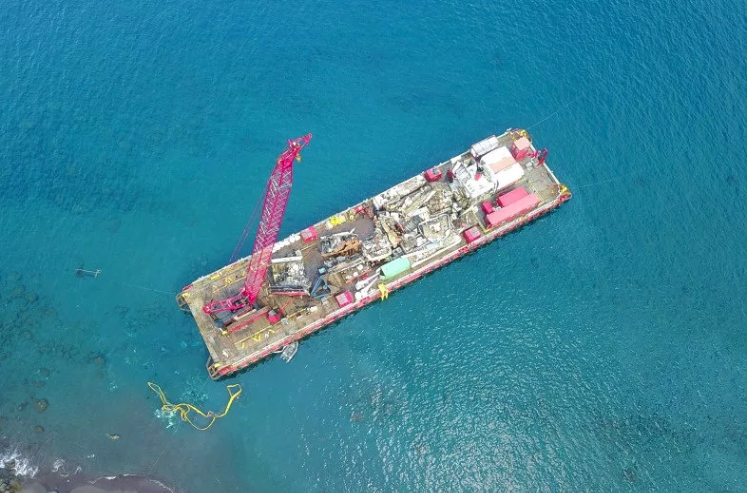 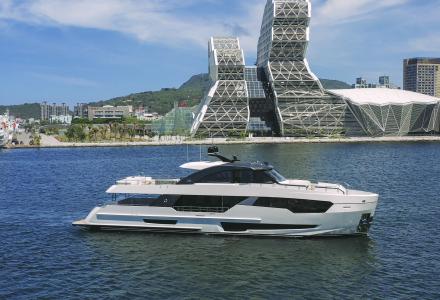 Ocean Alexander Presents Three New Models at the FLIBS 2021
At the upcoming Fort Lauderdale International Boat Show Ocean Alexander will present three brand new models, ranging from 30-37 meters. The 30R and 35R are models in the popular Revolution series and the 37L is the new flagship of the Legend series. All three yachts were designed in collaboration with Evan K. Marshall has once again commanded the attention of the yachting world with their innovative design, compelling amenities, and luxurious finishes.30RThe 30m 30R has a vertical bow, a signature to the Revolution series. The main salon with the open concept layout features the floor to ceiling windows with near 360° views. Coupled with a stunning on-deck master stateroom and four more spacious staterooms on the lower deck, this yacht rivals a peer group that measures well over this size category. The upper bridge deck is an owner favorite place and can opt for the opulent enclosed skylounge or the openness of the New Generation Pilothouse. Both configurations provide a bar, TV, grill, comfortable sun beds, and an optional hot tub. The helm station fits with large touchscreen Garmin navigation and other top of the line equipment.35R The 35R represents the pinnacle of the Revolution series. The volume of the 35R interior is unrivalled and features a layout that can only be compared to much larger yachts. It also has expansive outdoor spaces for clients to enjoy. The beach club has beyond the sea level entertaining space complete with television and wet bar, it is fit with a sauna and gym that is accessed either directly from the beach club with its fold down swim platform or from the interior via side deck stairs on the port side. Further, the space is also equipped with a day head and stall shower which connects directly to this highly active area.37L The 37L is the largest yacht in the Legend series. The main salon seamlessly flows into the dining area with enough seating for ten guests. The dining table is flanked on both sides by two massive sliding glass doors that open to the wrap around deck that leads to the bow and aft deck. The 37L is also fit with a beach club that is the ideal place to relax, soak up the sun, and enjoy the water.Ocean Alexander is a family business. Two generations of one family have guided the shipyard for almost four decades. With manufacturing in Taiwan, Ocean Alexander is consistently one of the top selling brands for large yachts in the U.S. and currently produces models ranging from 26 to 36 meters in length. Credits: Ocean Alexander
October 22, 2021 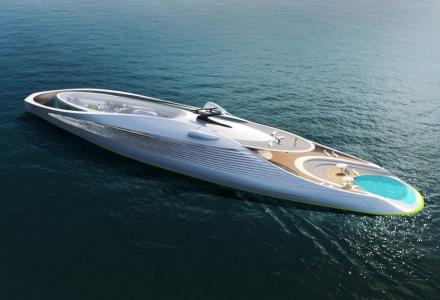 A Floating Garden: Zero-Emission Superyacht Concept by 3deluxe
The Berlin-based design studio 3deluxe unveiled a new superyacht concept VY.01 at the Monaco Yacht Show 2021. The zero-carbon yacht is available for purchase as an NFT on the auction platform SuperWorld. The aim behind the concept was to develop the zero-carbon superyacht. The concept features a seawater desalination system, powered by solar panels, for the watering of the greenhouse. Healthy food can be cultivated on board – the yacht has its own green and vegetable gardens. The interior of the 110m yacht also sets new standards and corresponds to the visionary, nature-oriented philosophy of the project: a light-suffused, loft-Iike space forms a spacious room continuum made up of a greenhouse. Lounge living space, kitchen, bar and vegetable garden. Luxury is rewritten entirely, with natural surroundings replacing acrylic glass and brass. The master cabin is an open-topped space within a greenhouse with a sky view. The spacious open and close interior also corresponds to the modern design concepts. The most attractive and progressive key technology for zero-carbon propulsion of cruise ships and yachts is currently considered to be fuel cells driven by hydrogen. The silent electric engines also avoid any noise pollution. The construction of a yacht is planned to be emission-free and sparing in its use of resources as possible. Credits: 3deluxe
October 22, 2021 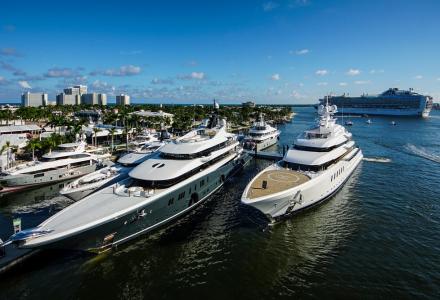 2021 Fort Lauderdale International Boat Show Preview
The 62nd annual Fort Lauderdale International Boat Show will be held from October 27th – October 31st. The event will take place at the Bahia Mar Yachting Center, FLIBS showcases more world and U.S. debuts than any other boat show in the country. The five day event showcases over 1,500 yachts and boats across seven locations. The boat show is an excellent opportunity to participate in the best of Fort Lauderdale’s luxury lifestyle, which includes waterfront dining, seven miles of white sand beach, luxury resorts, and high-end shopping.Each year, the show brings together boat enthusiasts from across the globe to the “Yachting Capital of the World.” Attendees get access to the industry’s latest boats and yachts of all sizes.“We are excited to welcome back the global community of visitors and exhibitors to the 2021 Fort Lauderdale International Boat Show,” said Andrew Doole, President of U.S. Boat Shows with Informa Markets, who produces the Fort Lauderdale International Boat Show. “In 2020, Informa was able to host an incredibly successful event that exceeded industry expectations despite the pandemic, and we anticipate that the 2021 boat show will raise the bar even higher for boating exhibitions.” FLIBS is a major economic driver benefitting the marine industry, the city of Fort Lauderdale, and the state of Florida with a total statewide economic impact of $1.3 billion as a result of the 2019 show and over $714 million in products sold over the exhibition. With over 80 percent of the show taking place in open-air outdoor spaces, FLIBS will continue to offer a safe, open-air experience for exhibitors, visitors, and the local community to enjoy the greatest boat show on the seven seas. FLIBS 2021 spans more than three million square-feet of exhibit space:Superyacht Village brings to South Florida the world’s most spectacular superyachts and exhibits including renowned shipyards, personal submarines, and exotic collectible automotive items. The Superyacht Village and marina feature vessels nearly 300 feet. The Superyacht Village will be open to all general admission ticket holders and features direct access by water tenders and shuttle bus routes to and from the show’s other locations, as well as on-site valet and self-parking. Windward VIP Club is an exclusive indoor and outdoor destination to enjoy the excitement of the boat show featuring shore and water views with a premium open bar, gourmet food offerings, and the perfect setting to enjoy this international boating event. AquaZone is designed to give boat show-goers an upfront and personal experience with a variety of water sports and innovative marine products.629 boats will be attending the Show, including Feadship 77m Boardwalk, Benetti 40M Oasis, 45.6m Damen Yachting Pink Shadow, 29.1m Sanlorenzo NiniPop XL.Tickets are priced from USD 30 till USD 300 for a VIP and experience. Credits: FLIBS
October 22, 2021 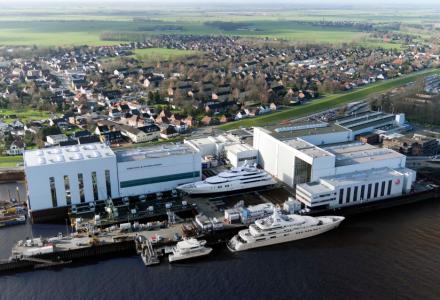 120m+ Megayacht to Be Built by Abeking and Rasmussen
Abeking & Rasmussen has announced that the contract for building a 120m plus superyacht was signed this summer. The shipyard's current order book includes the 118m length megayacht in its stage of outfitting. She is the largest ship A&R has ever built and will be delivered to her owner next year. Except this year’s additions the Abeking & Rasmussen order book include three Multi Purpose Vessels with more than 90m length each. These are some of the most innovative and challenging projects the shipyard has ever worked on. Abeking & Rasmussen has managed to contract two mine hunting vessels for the Indonesian Navy. The next generation of mine hunting vessels is 62 m long and made of high-strength and non-magnetic steel produced using an innovative laser welding process.Nine refits have arrived at the shipyard, some new clients included and there are more refit projects to follow soon. Yacht new builds, refits, multi purpose vessels, mine hunters, LNG propulsion systems, laser welding – it seems like a lot of different challenges the shipyard has to work on. How does Abeking & Rasmussen deal with this versatile and challenging order book? “Working on a range of projects and technologies for different clients and purposes has always been a strength of Abeking & Rasmussen. Besides certain synergies we always found it very helpful to gain expertise with technologies in one market before these things where even asked for in other markets,” says Matthias Hellmann, CFO. Abeking & Rasmussen was founded in October 1907. The German based shipyard is looking back to 114 years of ship and yacht building. A&R is now able to launch yachts of up to 125 meters length. Credits: Abeking and Rasmussen
October 21, 2021 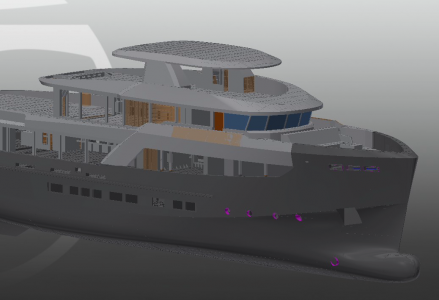 Bering Yachts and Trasco Bremen Announced Close Collaboration
Antalya-based Bering Yachts and Trasco Bremen, the world’s leading commercial builder of armoured vehicles with over 35 years of experience, has announced a collaboration for protecting specific areas aboard Bering explorer yachts. The aim of the partnership is to provide discerning owners with comfort and autonomy combined with added on-board safety so they and their families can cruise remote locations with complete peace of mind. Steel-hulled Bering yachts are already renowned for their rugged construction, but shielding the most critical areas with bullet proof materials – such as the wheelhouse or engine room, as well as vital machinery or the navigational, communication and alarm systems – offers ultimate protection against unwanted intrusion.Bering Yachts is located in Antalya, Turkey. Its shipyard designs and builds semi-custom steel expedition yachts and luxury steel trawler yachts ranging in size from 50 to 145 feet. Credits: Bering Yachts
October 21, 2021
All news