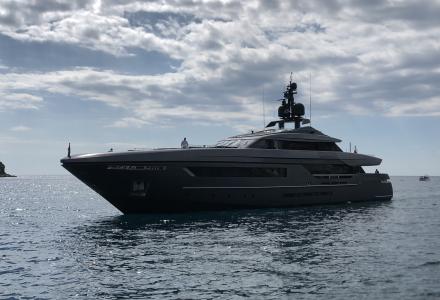 46-metre superyacht Lucky Me by Baglietto spotted in Rovinj, Croatia

In February, 2017 YachtHarbour has announced that Baglietto 46m Fast was sold and named Lucky Me. Few days ago, our reader Mark Cernela, port authority worker, spotted 46-metre Lucky Me in Rovinj, Croatia.

Photo by Mark Cernela
The project was introduced in March, 2014 and launched as hull 10221 in May, 2016. Powerful, aggressive lines, further highlighted by the lead grey shade of the hull, characterize Lucky Me. The trapeze-shaped windows in the hull alternate with rectangular ones arranged on two different levels, enhancing the slender shape of the hull and giving a more contemporary touch to the yacht's outer profile. Another new element characterizing the exterior lines is the compact shape of the superstructure.

Photo by Mark Cernela
In June, 2016 the yacht completed sea trials and later attended various shows including Versilia Yachting Rendez Vous, Cannes Yachting Festival and Monaco Yacht Show. Great care is devoted to the outdoor areas, so as to allow passengers to be in closer contact with the sea when both cruising and at anchor. The aft area of the upper deck hosts an open terrace overlooking the sea furnished with a large table and a spacious sunbathing area.

Photo by Mark Cernela
The interiors, also pencilled by Francesco Paszkowski Design together with architect Margherita Casprini, feature impressive volumes, rarely found on planning yachts of this size. The warm shades of rosewood used for lining and floors alternate with the colder white lacquered ceilings and side panels across the entire boat. The layout features the full beam master cabin located forward on the main deck and the guest area on the lower deck. The upper deck features a salon with conversation area, the captain’s cabin, and the wheelhouse, while the crew quarters, on the lower deck, include 4 twin cabins plus a single cabin and the dinette.

Photo by Mark Cernela
Lucky Me was sold in February, 2017 through Marine Marketing for €28,000,000 and went on charter market through Camper & Nicholsons starting from €200,000 per week. Performance wise Lucky Me, entirely built in aluminium, can reach a maximum speed of 26 knots thanks to twin MTU 16V4000 M93L engines; one of the most important naval characteristics is the reduced draft of 2,10m and for this reason she can easily cruise in shallow waters. The yacht is classified with Lloyd's Register of Shipping and compliant to MCA standards.
Check our Timeline platform to get the full access to our analytics platform, that offers you a detailed report on the timeline of each superyacht, real time market view to see the yacht market developing and much more!
Facebook
Twitter
Google+