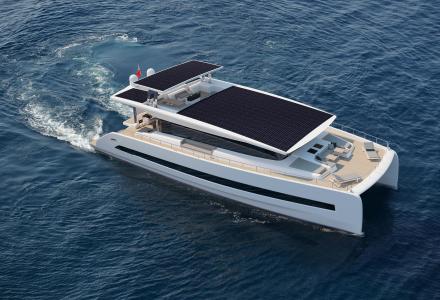 Austrian company Silent-Yachts, currently the only producer of solar-electric ocean-going luxury catamarans anywhere in the world, has released news that it has sold four models in its Silent 80 flagship series. It was previously called the Silent 79 and was sold to a South African client and it’s going to be delivered in early 2020. 3 other units are also due for a late 2020 delivery. All catamarans are under construction in Ancona, Italy. 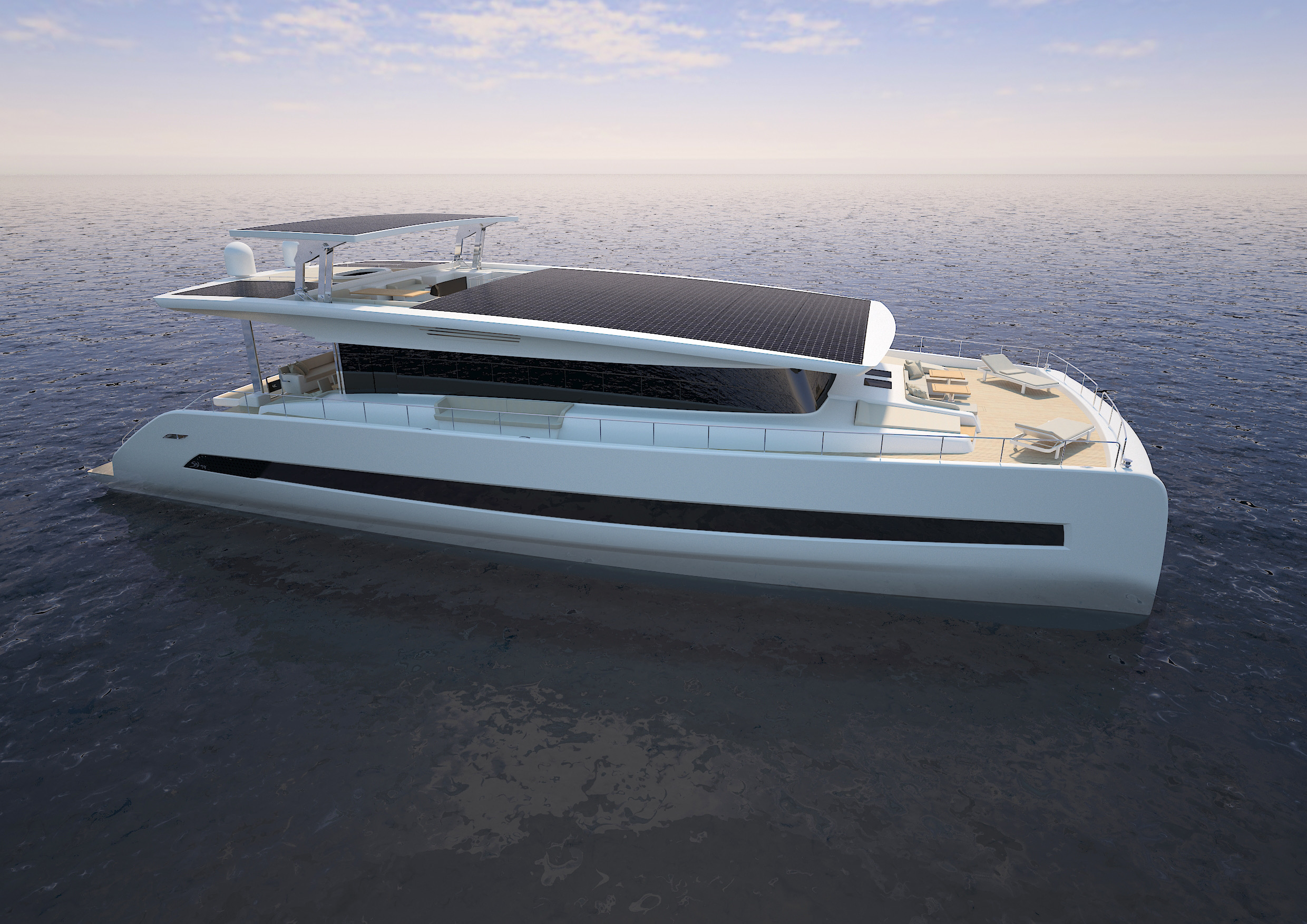 The light-weight Lithium-Batteries provide ample energy for the propulsion as well as for all household appliances – 230 V, day and night - 24/7 - for television, air-conditioning, ice-machine, watermaker, laptop and much more.....

No need to search for a marina to charge the batteries, to get ice, to refuel or to fill your watertanks. Energy, always available, like at home. Production of up to 3.000 liters of drinking water a day grants you a kind of comfort you would not have considered possible up to now with solar power sources. 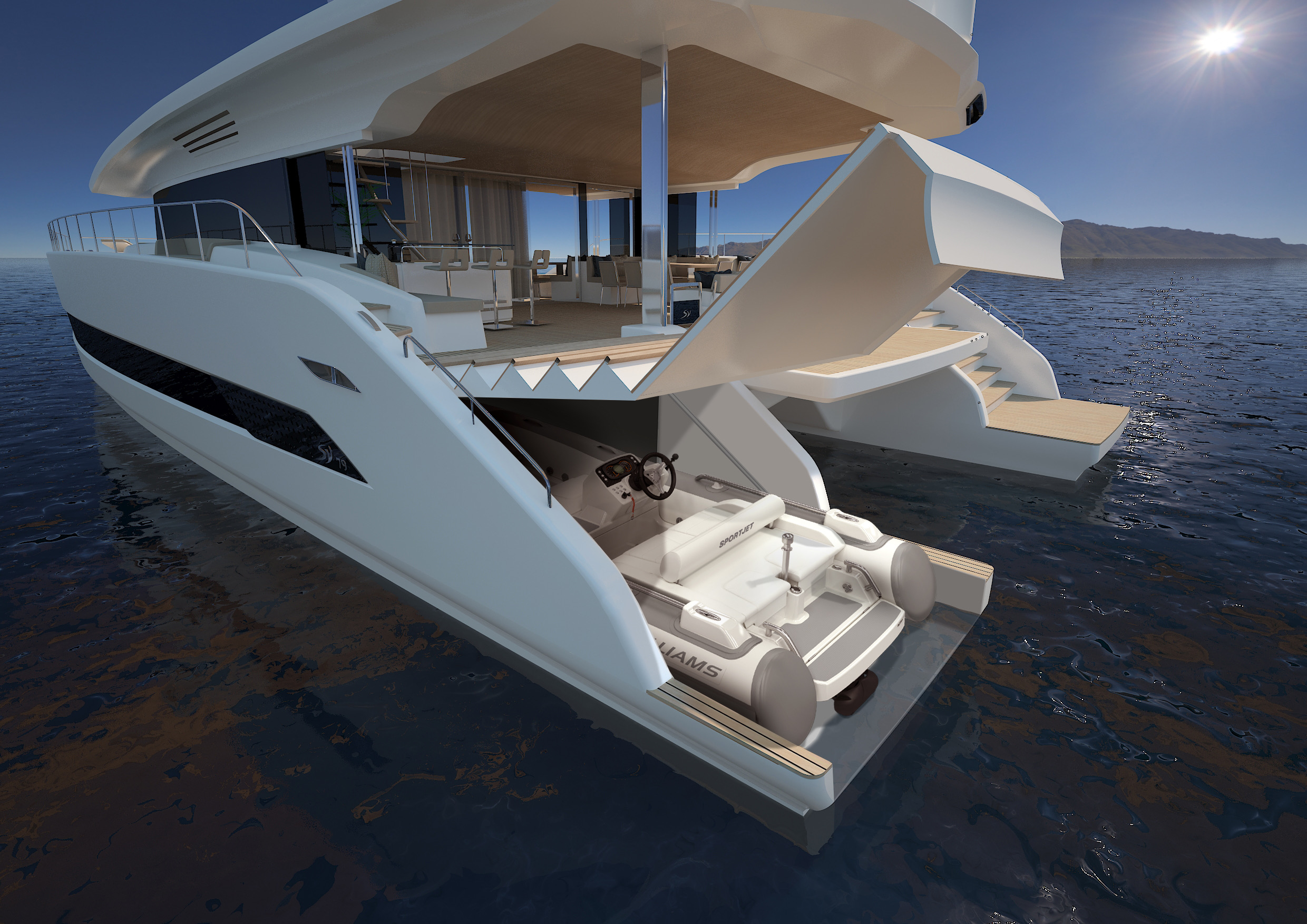 The Silent 80 has been designed inside and out by Marco Casali of Too Design. Naval architecture, meanwhile, has been undertaken by MICAD. The concept was created by Silent Yachts chief executive Michael Köhler.

The solar panels are integrated in the roof and the batteries and electric-motors are inside the boat in a dry place. All components are virtually free of maintenance. So the running-costs are much lower than on a comparable conventionally powered catamaran. Solar panels have a guaranteed life-span of more than 25 years. After that time it will be quite cheap to replace them according to the yard. The electric motors are completely free of maintenance. Due to their sensationally low weight, the streamlined shape, Silent-Yachts have less wave drag than other sailing- or motor-yachts.

The Silent Yacht is powered by electric motors and has a cruising-speed of 6-8 knots, as maximum reaches 10 knots. With diesel-engines a "Silent-Power" has a cruising-speed of 15-20 knots and a maximum speed of more than 25 knots, so it depends on chosen engine configuration. Also at the “Sky Sails” version the yacht would be completed by a towing kite with full automatic control. The kite flies in altitudes of between 100 and 150m where the winds are much stronger, so the kite generates up to 25 times more power per square meter. 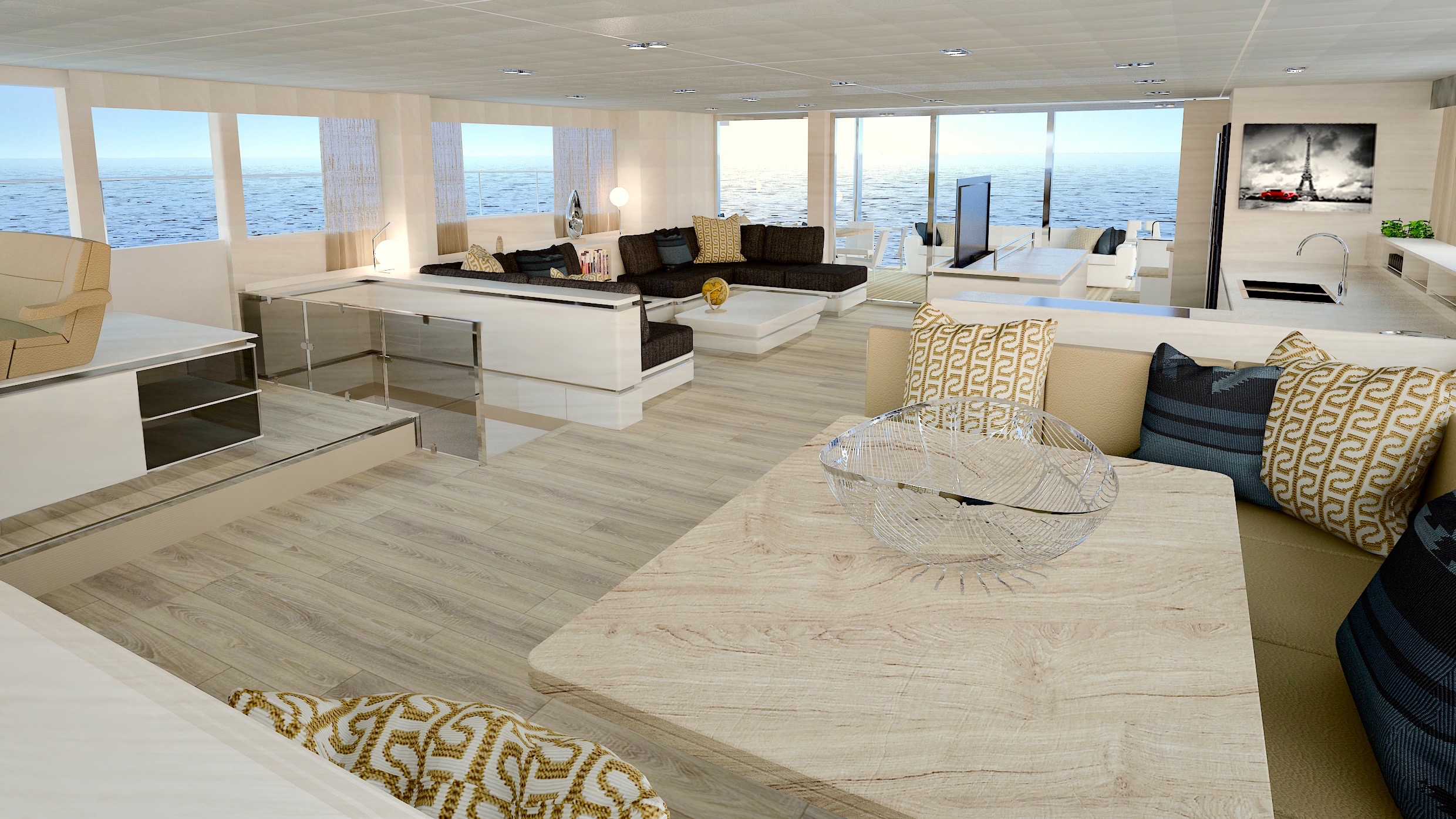 Designer Marco Casali tried to achieve an interesting Italian design, sophisticated and refined while imagined the interior and exterior of yacht. Social areas are equipped with a lounge and bar. The forward area is fitted with a sofa and sunpads. He added: “Inside the Silent 80 is designed to provide maximum comfort to owner and guests who spend months on board in long happy voyages.” 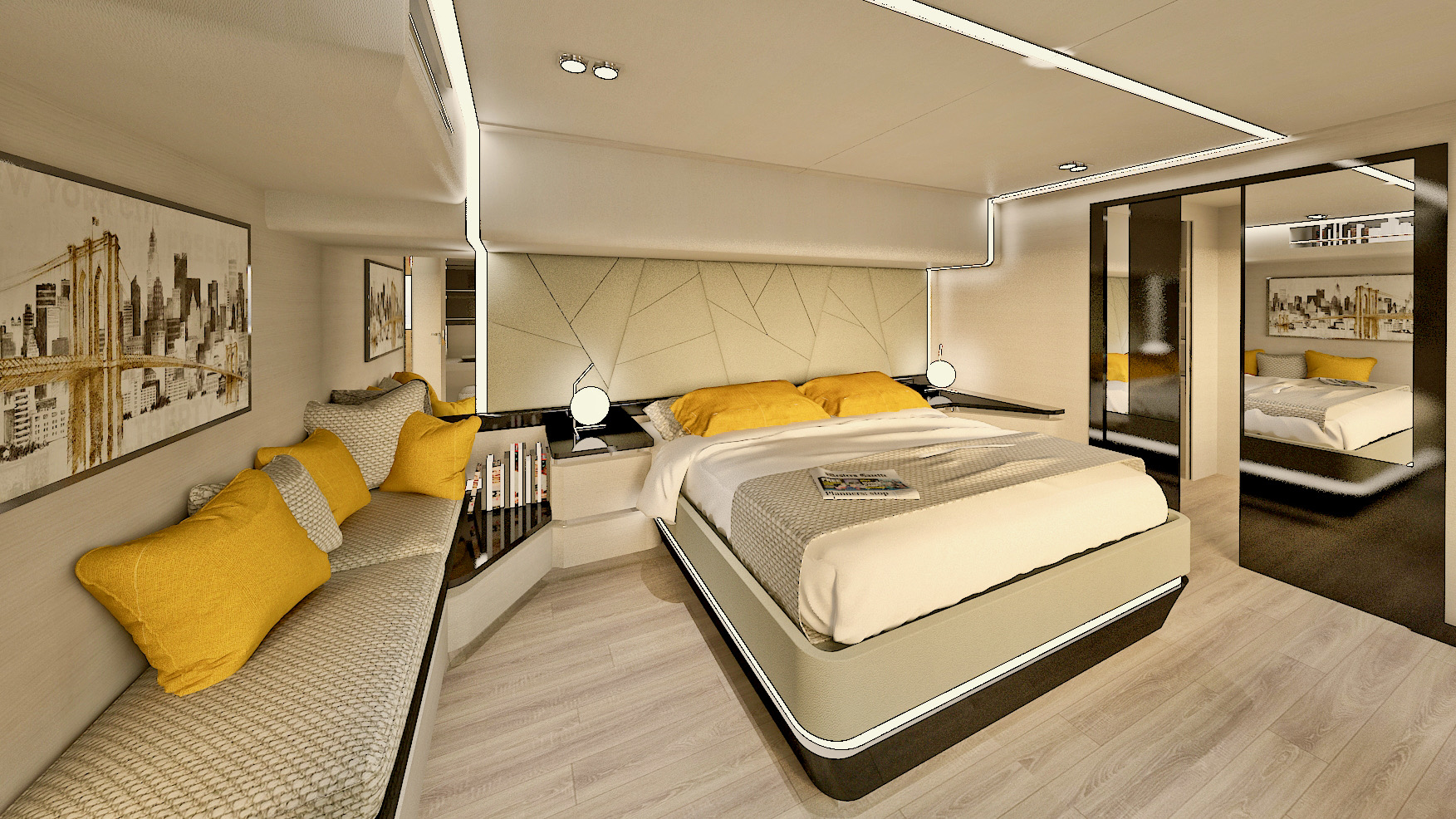 The 80 model is available in different versions and can accommodate up to10 guests in five cabins. These can either feature a double bed or two singles. The owner’s front cabin features an en-suite and walk-in office with a desk, locker storage and large mirror. 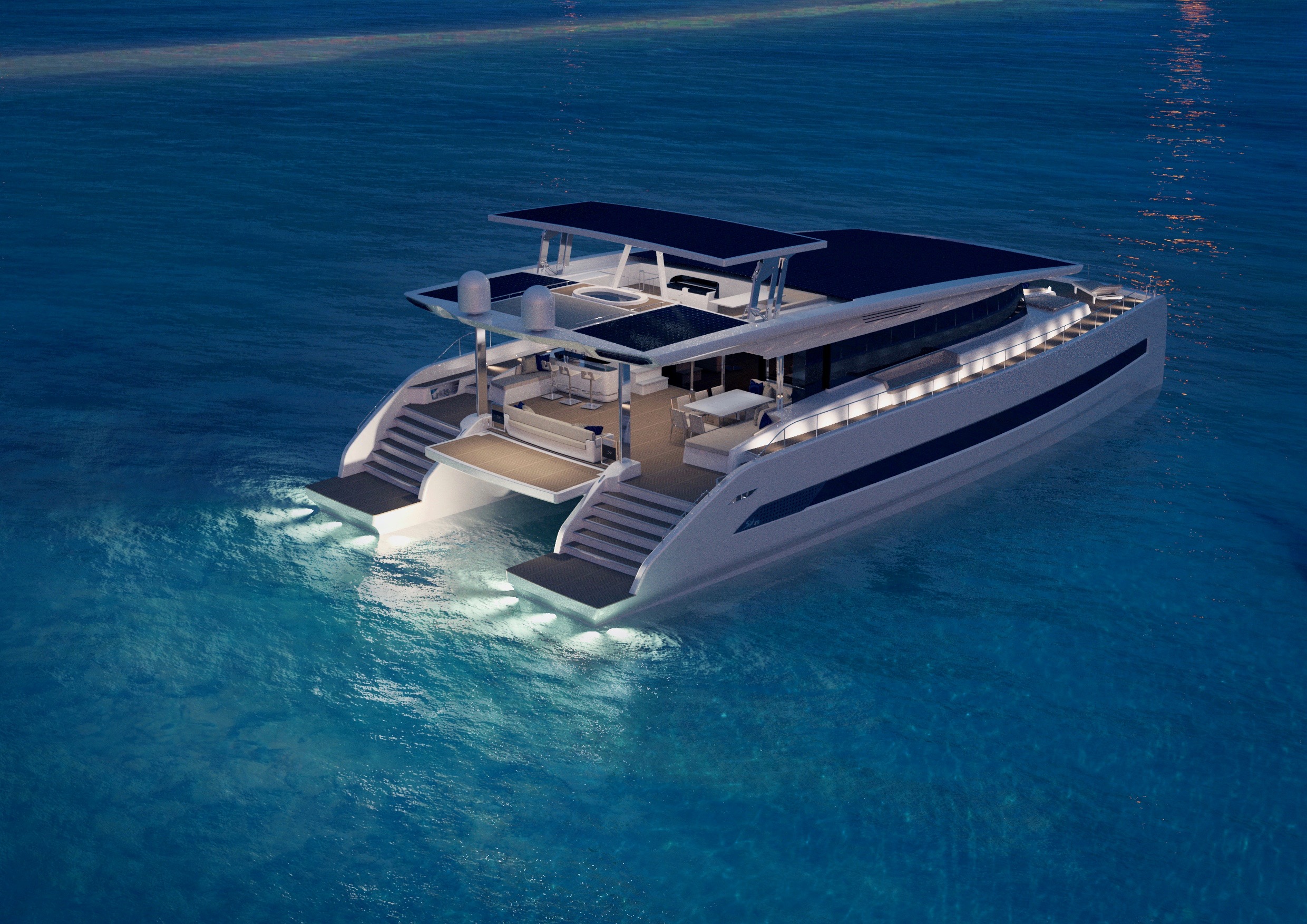 Without an engine room, the Silent 80 also has enough space for a 4.5 metre tender, and gyrocopter which is quite impressive for a yacht under 24 metres long. 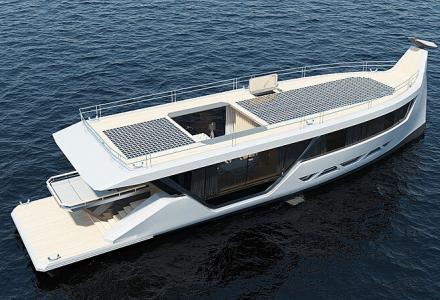 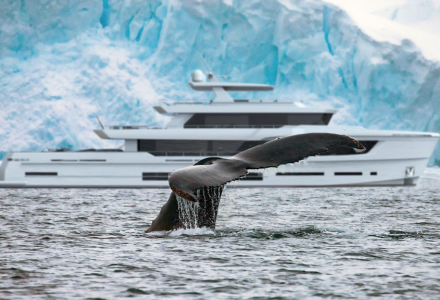 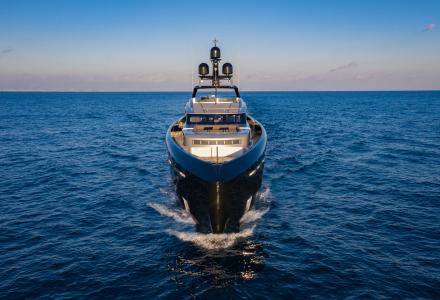 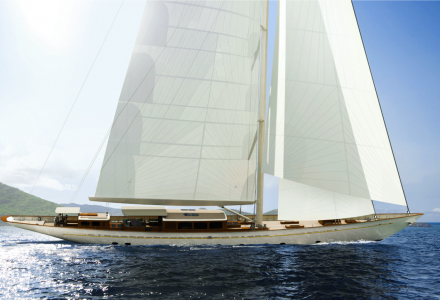 Turquoise Has Announced the New Delivery Date of the 51m Sailing Yacht Rainbow II
At first, the expected delivery date was 2021, but the shipyard has moved it to 2022. Rainbow II is a classical 51m sloop. She began her life in the Netherlands prior to the hull being purchased by Turquoise Yachts. Her exterior and naval architecture were made by Dykstra Design. The main deckhouse salon will provide guests with sweeping views all around, while the adjacent main cockpit offers a cozy place to enjoy the sailing and ample space for al fresco dining. The modern sloop rig results in efficient sailing performance using modern technology to ensure easy and safe handling of the sails. A side-boarding platform allows easy access to the sea and tender boarding.The elegant interior with mahogany walls was made by DeVos deVries. Her layout contains five guest cabins and four cabins for a crew of nine. The outfitting will begin soon, so more details are to come. Turquoise was established in 1997 by two leaders of the Turkish boat building industry: Proteksan Yachts Inc. and Turquoise Yacht Construction. After launching the 50m M/Y Turquoise (now called Double Trouble), 20 other megayachts ranging from 40m to 77m in length have since been delivered to an international roster of clients from the United States, United Kingdom, Europe and Russia. Credits: Turquoise Yachts
January 27, 2021 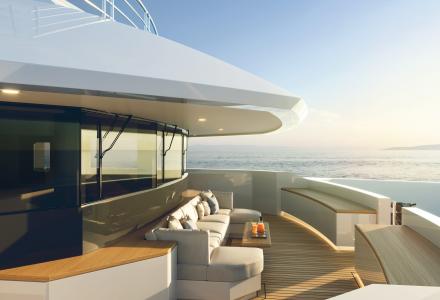 Amels 6001 Has Begun Her Journey To Outfitting
The 60m yacht has begun her journey from Poland to the Amels facility in the Netherlands for outfitting. Amels 60, featuring hybrid power and propulsion technology, has an Espen Oeino exterior design. The model has become the second collaboration with Oeino for the yard, following the 78m Amels Full Custom, which is now under construction for delivery in 2021. Winch Design was appointed by the owner to create the bespoke interiors of this first Amels 60 hull. It’s the third Amels new-build yacht for the owner. The Amels 60 interior layout sleeps up to twelve guests in six comfortable cabins and thirteen crew members. With a cruising speed of 13 knots, she can reach 4,500 nautical miles. Her top speed is 15.5 knots. The yacht is now under construction for delivery in spring 2022.Damen Yachting, a division within the Damen Shipyards Group, was created in 2019. The division combines the pedigree and heritage of Amels yachts with a growing portfolio of SeaXplorer yachts and Yacht Support vessels.Credits: Amels
January 27, 2021
All news