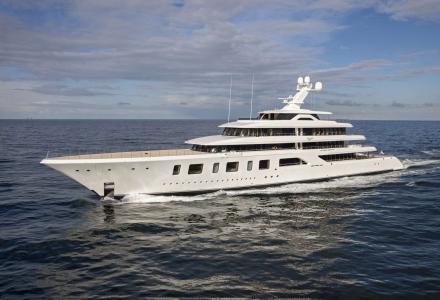 The Monaco Yacht Show remains to this day the main event in the superyacht industry despite rising competition from other venues. The majority of vessels that will be docked in Port Hercules during the event have now been announced. Here is the list of the largest superyachts created in order of descending length.
1. Aquarius 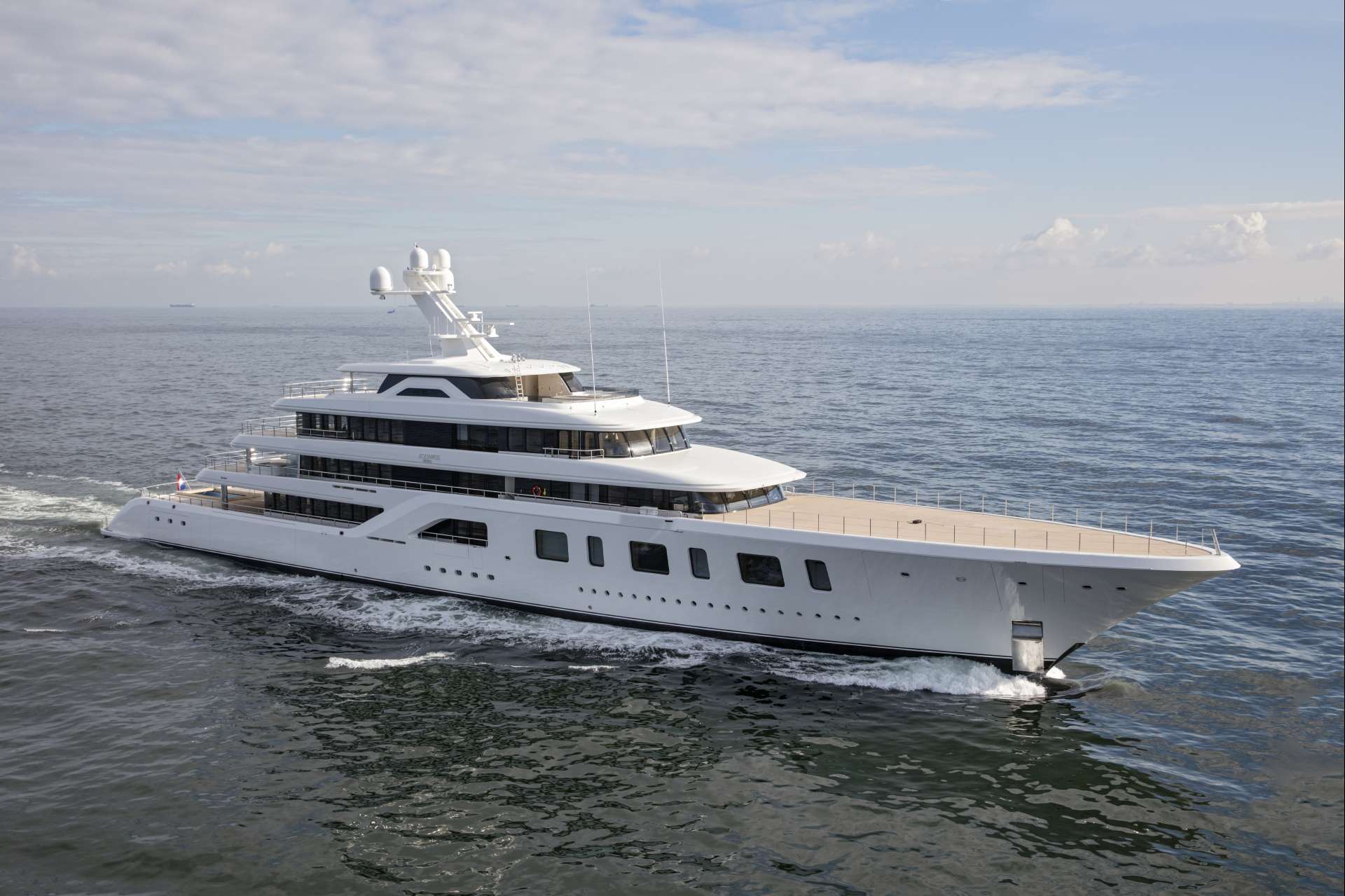 92-meter Aquarius (Project Touchdown) was launched by Feadship in September 2016. The superyacht features a resolutely contemporary exterior design with a number of archetypal Feadship elements, such as a conventional bow and raked superstructure shape. The profile comes from the boards of the Dutch company Sinot Exclusive Yacht Design, which was also responsible for the interior design together with the owner's design team in close cooperation with Feadship De Voogt Naval Architects.
2. Areti 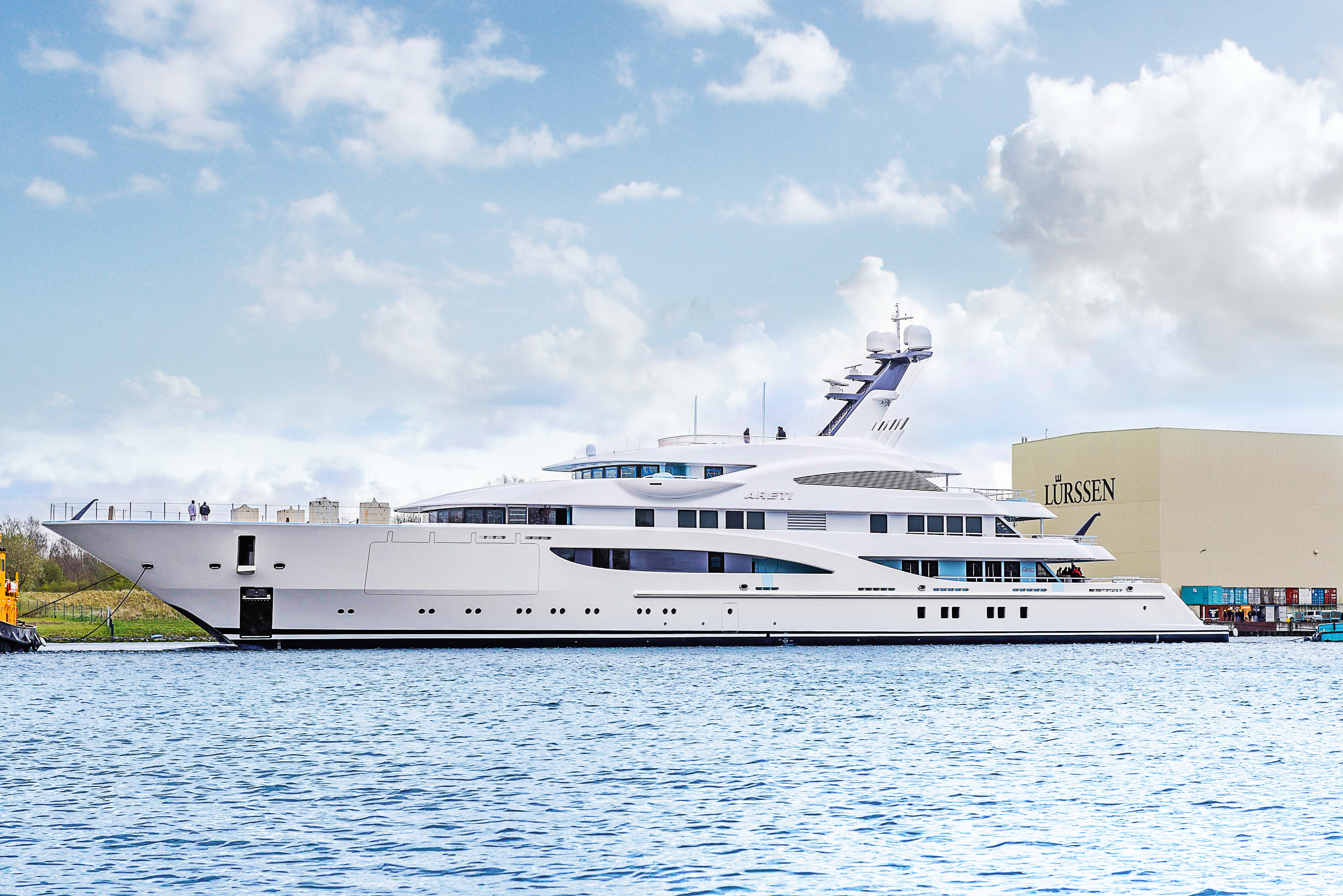 Designed throughout by Winch Design, Lurssen's Areti features a large master suite with 8 additional guest suites. Amongst her amenities are an extensive spa area featuring a sauna, a hammam, a jacuzzi and a plunge pool located near to Areti's beach club.
3. Legend 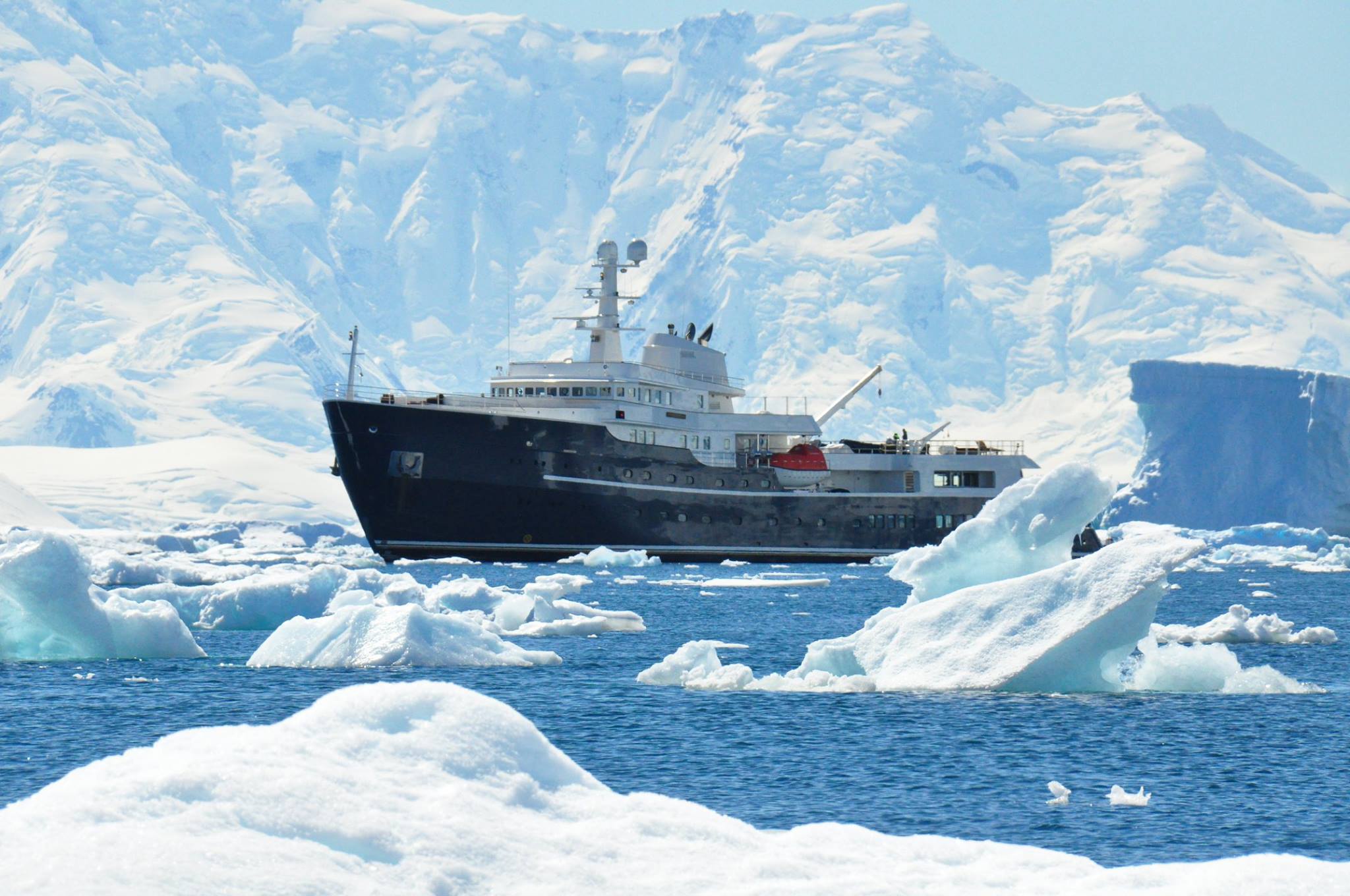 Launched in Harlingen in March 2016, 77,4m yacht Legend features naval architecture and exterior styling by Diana Yacht Design, interiors by Thom Beerens and Jan Verkerk. Originally constructed in 1974 by the IHC Holland shipyard, the tranformation into an icebreaking passenger ship with a 1B-Swedish / Finish classification took place at Icon Yachts. Moreover, the vessel was lengthened in the stern by 3,6m, whilst her superstructure was completely redesigned and her mast rebuilt. One of the most alluring features is Legend's swim platform and a large swimming pool/Jacuzzi. In addition, she has a luxurious submarine for underwater exploration. Other amenities include a fitness room, movie theatre, medical suite, bar and BBQ areas. Performance wise the superyacht is powered by Smit-Bolnes engines, providing her with a top speed of 16 knots and a cruising speed of 13 knots.
4. Silver Fast 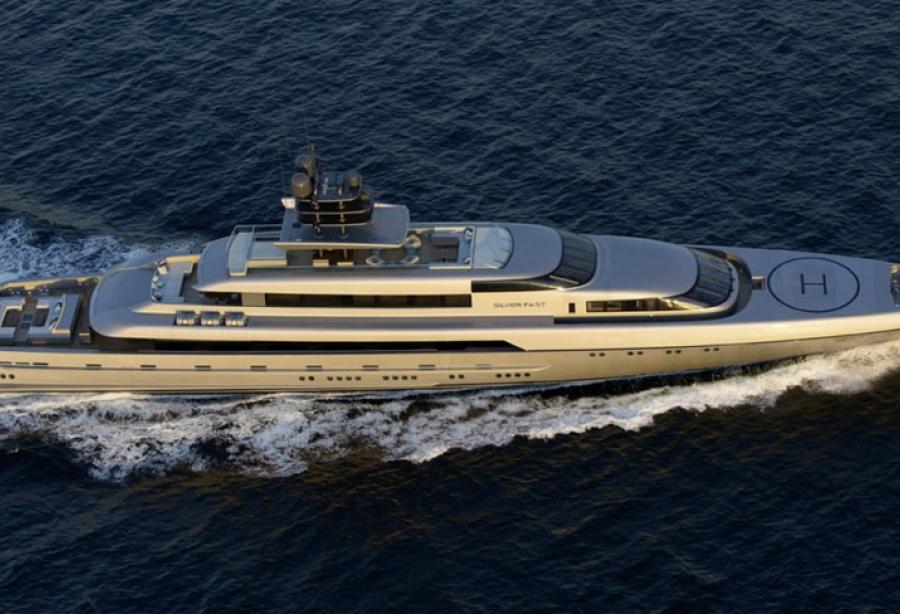 The 77m superyacht Silver Fast was launched by Silver Yachts in 2015. The exterior was designed by Espen Oeino, representing the most advanced, eco-fuel efficient vessel in the revolutionary silver series.  Silver Fast is the fastest long range cruising yacht-4,500 nautical miles at 18 knots and 6,000 nautical miles at 14 knots with an already proven capability to effortlessly complete long passages in every sea state. Moreover, this superyacht represents the world's largest and fastest aluminium motor yacht with conventional propulsion in terms of length to speed ratio. Silver Fast is capable of crossing the Atlantic at approximately 22 knots cruising speed.
5. Cloud 9 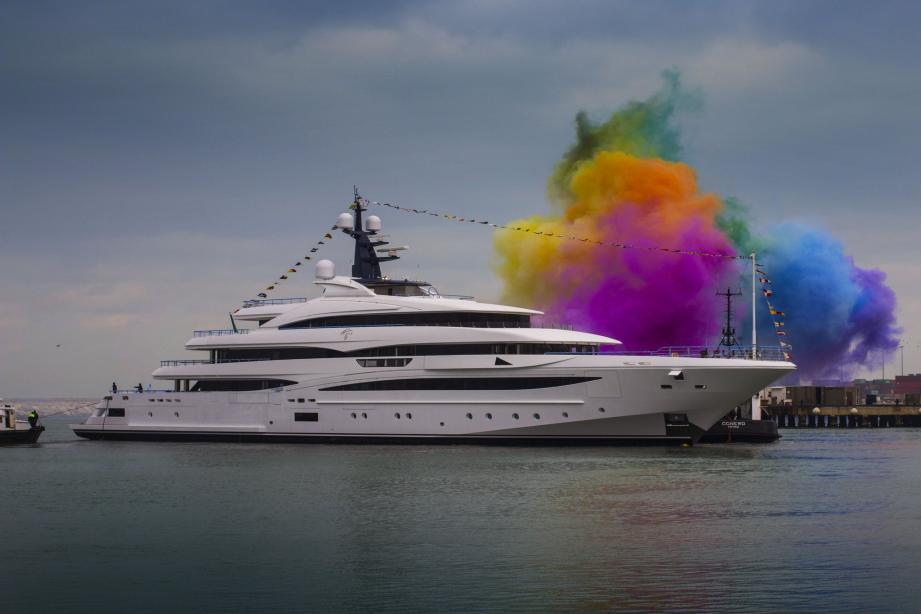 Delivered by Italian shipyard CRN, part of Ferretti Group, Cloud 9 became a replacement for her owner's previous 61-meter CMN of the same name. With an exterior by Zuccon and an interior by Winch Design, Cloud 9 is able to accommodate up to 16 guests (12 when chartering) in a master suite, a VIP suite and 6 guest cabins catered to by a crew of 22.
6. Project 783

Designed by Reymond Langton Design studio with contemporary interior conceptualised and furnished by the renowned designer Mark Berryman, built by the German shipyard Nobiskrug, and delivered in 2012 by Imperial who acted as Owner’s Representative, 73.5-metre length Project 783 is a superyacht exclusively available for sale with Imperial. Among her features are a luxury beach club, gym on Sun deck, fully equipped private indoor cinema and its outdoor sister. The vessel offers accommodation for 12 guests (cruising and sleeping) in six cabins.
7. Martha Ann 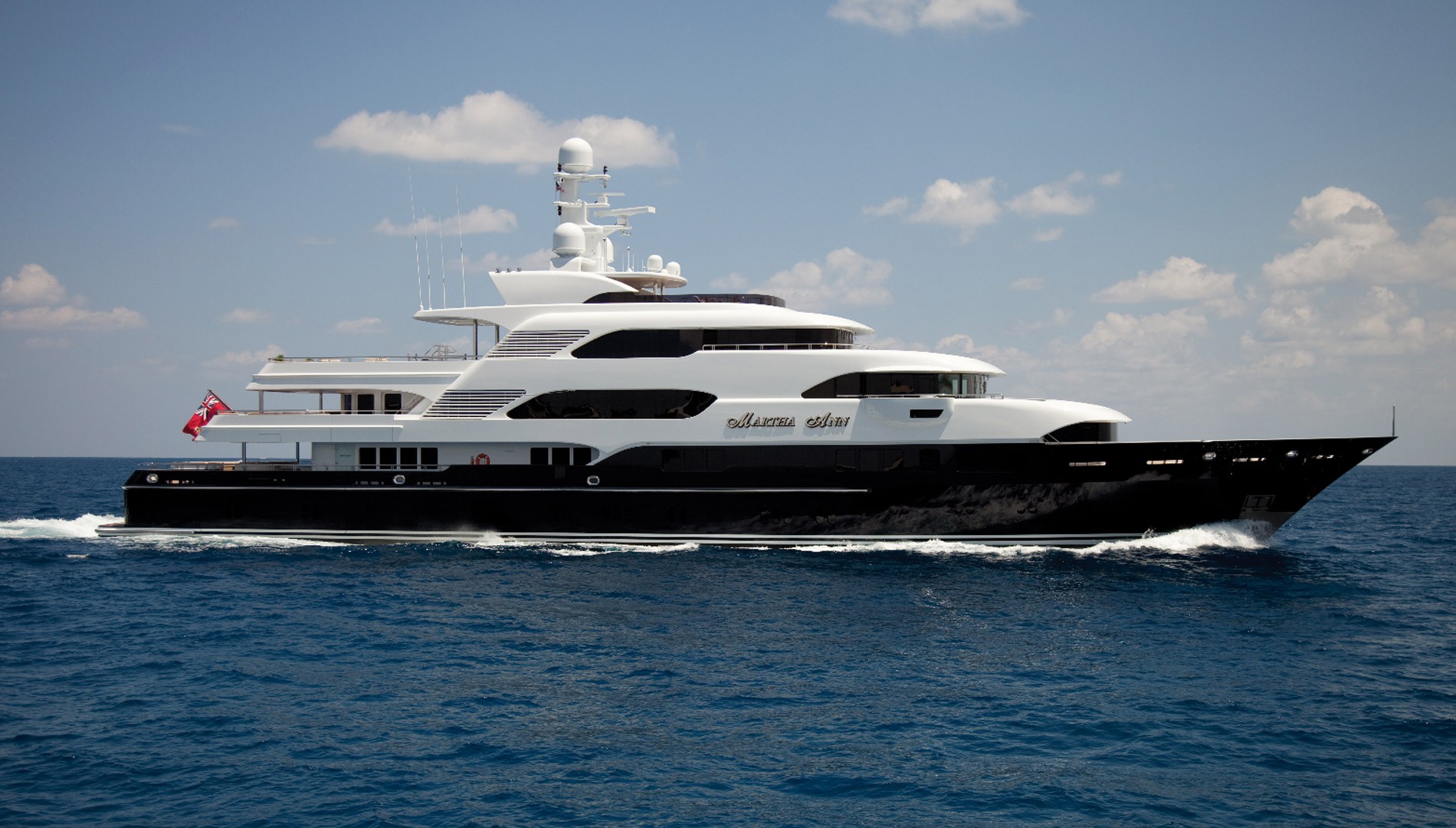 70.2m Martha Ann was built for Warren E Halle and is the latest of three yachts commissioned by the American entrepreneur from Lurssen. Refitted in 2014, the yacht is classified by Lloyds and MCA compliant. Her 6 cabin-layout can accommodate 12 guests in a full beam master cabin, a VIP on the upper deck and four double cabins on the lower deck. From a technical standpoint, Martha Ann is powered by twin Caterpillar engines of 2,010 hp each giving her a maximum speed of 15.5 knots and a range of 6,000 nautical miles at 13 knots. For maximum comfort, this yacht for sale is fitted with zero speed stabilizers.
8. Game Changer 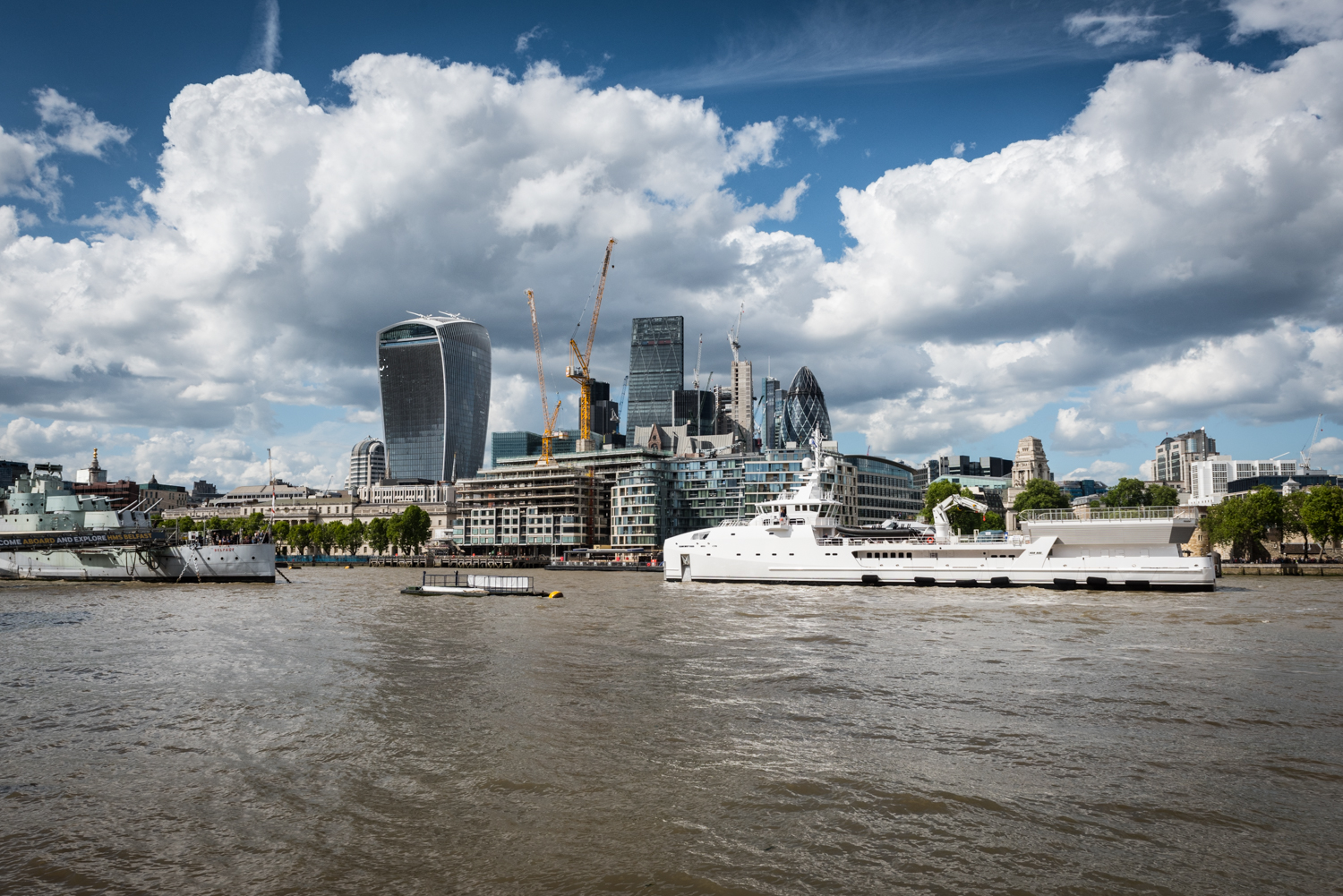 Dutch shipbuilder Damen has launched Game Changer,  70-metre yacht support vessel with helicopter hangar, in March 2017. The vessel features a fully certified helideck so owners can take larger helicopters on long range flights to their mother yachts and land safely in a wider weather window. Lowering the helicopter into the hangar protects it from the elements so it is refuelled and available for take-off without causing hassle, disruption and noise on the mother yacht.
9. Seasense 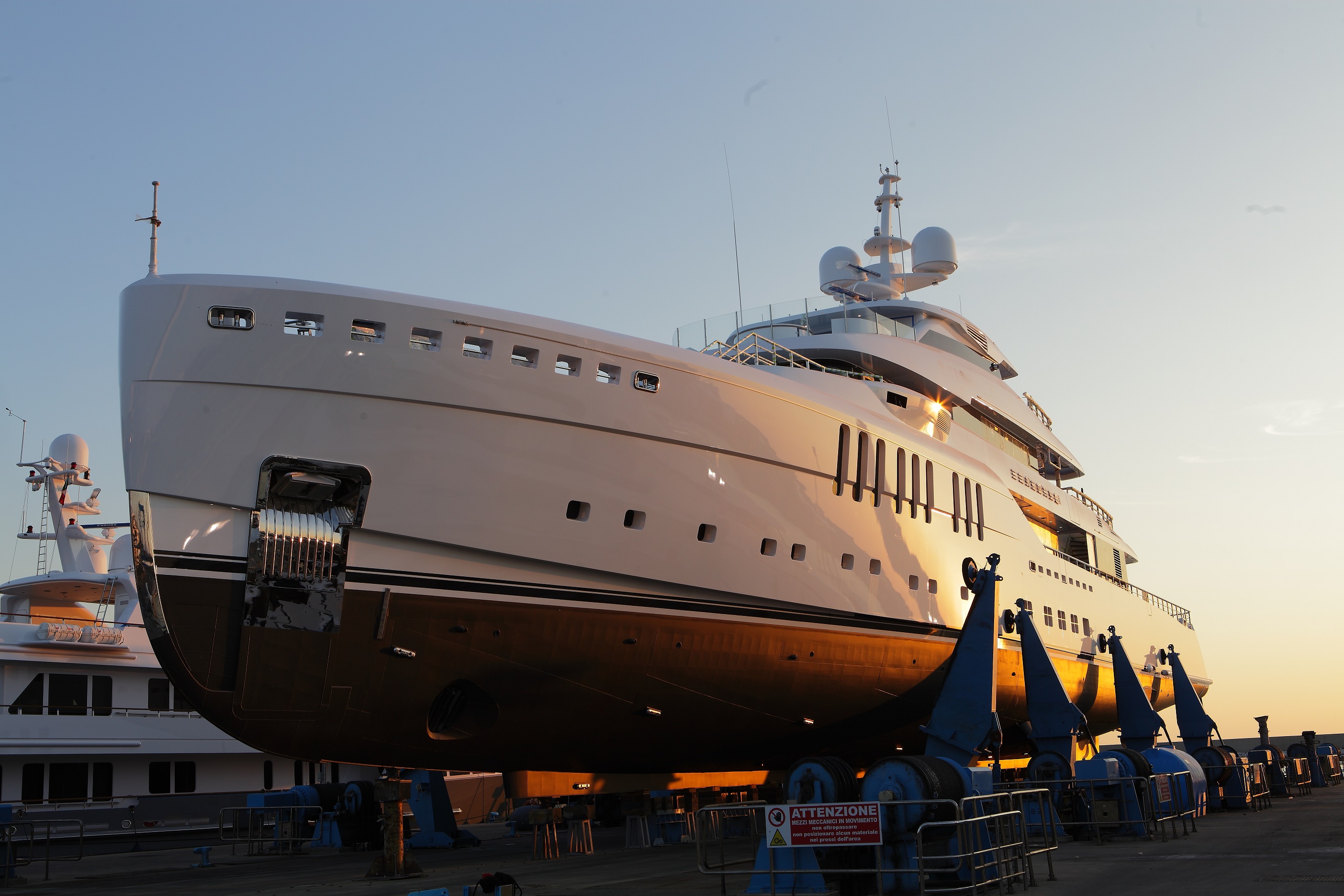 Benetti has launched 67m superyacht Seasense, previously known as FB268, for an experienced owner who has chosen the Italian brand for the first time. The exterior lines of Seasense are by the Dutch designer Cor D. Rover, while the naval architecture was developed by the shipyard’s technical office. The contemporary styling of the interiors, on the other hand, is the result of collaboration between the Benetti’s architects team and the design studio AREA from Los Angeles, making its debut in the world of superyachts. The layout includes six suites that can accommodate up to 12 guests.
10. Infinite Shades 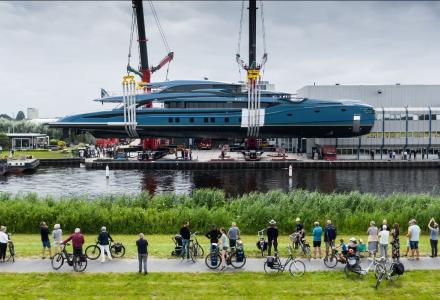 Royal Huisman Launched 58m Phi
Phi launched at Royal Huisman’s newbuild facility in Vollenhove, The Netherlands. Phi’s overall length is 58.5m developed and constructed below 500GT, she is by far the longest motoryacht in this category, based on current Classification rules. Phi’s general concept, exterior design and interior layout were made by Cor D. Rover, whereas Naval architecture was done by Van Oossanen Naval Architects. Lawson Robb is the author of interior design.Royal Huisman is a Dutch shipyard established in 1884 in Ronduite, building and refitting custom luxury sailing and motor yachts at its shipyard in Vollenhove, the Netherlands.Credits: Royal Huisman
July 23, 2021 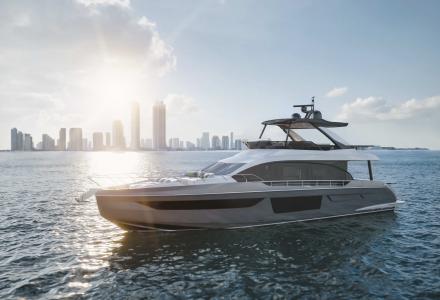 Azimut 68 Joins the Azimut Yachts Flybridge Collection
The newest model in the Flybridge Collection is the Azimut 68. The shipyard is offering the new Azimut 68 with three possible main deck configurations, plus a multifunctional area, each with a particular lifestyle in mind.In the first layout called Lanterna, an elegant living area is located by the main deck entrance, with the galley tucked away behind an innovative surface of ribbed wood and plexiglass. For owners who are seeking a more convivial layout, the open galley version is the ideal solution. The galley is in a discreet location towards the bow, but opens directly into the dining area, which can also be converted into a second lounge zone.For a slightly less formal layout, the aft galley arrangement is situated to readily serve indoors and more often outdoors, while keeping the cook connected with the entire social area. The dining is found immediately across from the galley as you enter from the cockpit, creating a relaxed flow, which leads to the living area forward.Each main deck option has been tastefully integrated into the overall design to complete a stunning yacht. Exterior designer Alberto Mancini penned the Azimut 68 as a further renewal of his characteristic style, sculpting the surfaces to achieve a sporty and modern design, an approach more commonly seen in sports car design. The interiors are designed by Achille Salvagni. He also designed the exterior furniture.Below deck, four cabins and three bathrooms accommodate up to eight guests, with a separate area for one or two crew members.The propulsion package of twin Volvo IPS 1350 pods carries the Azimut 68 up to a brisk maximum speed of 32 knots. <iframe width=560 height=315 src=https://www.youtube.com/embed/3gwy8QJ6htc title=YouTube video player frameborder=0 allow=accelerometer; autoplay; clipboard-write; encrypted-media; gyroscope; picture-in-picture allowfullscreen></iframe>Azimut Yachts is an Azimut Benetti Group brand. With its Atlantis, Magellano Flybridge, S, Verve and Grande collections, it offers the widest range of 34- to 125-foot yachts.Credits: Azimut Yachts
July 23, 2021 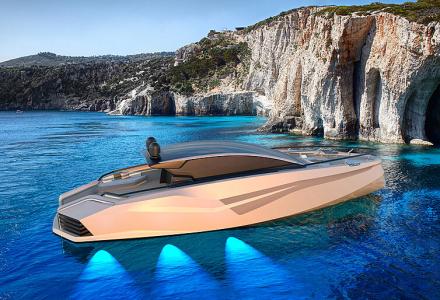 Azurite Yacht Design Unveiled New 27m Infinit-e 88 Concept
Australian based Azurite Yacht Design presented the 26.8m electric powerboat Infinit-e 88 with an aluminum hull and superstructure. Her exterior design features metallic pearl hull colour with a matte black superstructure that supports glass roof and full height windows in port and starboard that promises a living area with lots of natural light. Full height starboard windows are also sliding doors with a 2 meters opening that provides an open layout with an additional entrance to the boat. On the front deck, there is a convertible dining area for six people with an additional sunbathing area on the very front of the boat. The most exclusive feature of the yacht is expanding aft swimming platform that can give an additional 2 meters of a platform area right next to the water. There are two garages at the aft deck that can fit surfboards, 2x Seabob, wetsuits, and diving equipment with easy access from the swimming platform.‍Credits: Azurite Yacht Design
July 23, 2021 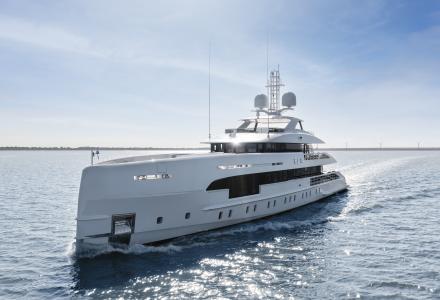 50m Ela Delivered by Heesen
Heesen has delivered YN 19550 MY Ela, formerly known as Project Altea. The yacht set sail from the Netherlands in July with her crew, and after meeting her owners in Gibraltar, will spend the summer cruising in the Mediterranean. Primarily intended for family use, Ela will also join the charter fleet of Zarpo Yachts to be available for selected clients.Ela has a lightweight, aluminium, fast-displacement hull, she is the second in Heesen's sub-500GT Nova Plus class. Ela was available with a very short delivery time when she caught the attention of her owners. With just three months between purchase and delivery they worked with interior designer Cristiano Gatto and the Heesen team to personalize the yacht to suit their family requirements. "Together with the client, we revisited all the loose furniture, inside and out, selecting new materials for all the upholstery and the key items from Paola Lenti, B&B Italia, Poltrona Frau, and Promemoria," said Cristiano. "But more importantly, we designed bespoke pieces, such as tables, sofas, and lamps, all beautifully crafted by Italian ateliers, who delivered them in record time." Ela can accommodate twelve guests in six staterooms, with the owners' suite on the main deck forward and the remaining five cabins – a full beam VIP, two doubles and two twins – on the lower deck."Ela is a magnificent addition to the Heesen fleet. We are very strong in this particular segment of the market – 50m all-aluminium yachts below 500 GT – and ours are recognized as the best in this market sector. Our delivery team worked seamlessly with Captain Antonio Gerini and Tony Lovec Management to deliver the yacht without fuss and on time for the summer season. On behalf of everyone at Heesen, I would like to wish the owners and their crew many happy days with family and friends wherever they may cruise!" says Friso Visser, Heesen CCO.Ela is powered by twin MTU 2000-series M72 V12s. She has a maximum speed of just under 20 knots, frugal fuel consumption, and a draft of just 2.15 meters, which makes her the most efficient yacht of her type built in the Netherlands.Heesen Yachts is a Dutch ship building company that specializes in custom-built superyachts in aluminium and steel from 30m to 70m in size. Founded in 1978, it has launched more than 170 yachts since its inception.Credits: Heesen Yachts
July 23, 2021 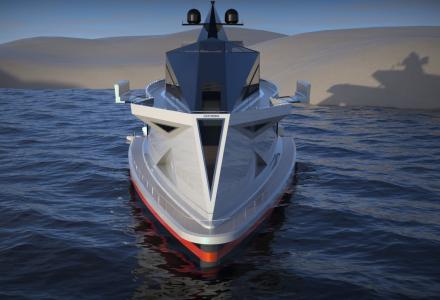 Lazzarini Revealed 100m Carbon Fibre Concept Saturnia
Design studio Lazzarini shared the new Saturnia 100m superyacht concept made from dry carbon fiber. She is estimated to be 50% lighter than other yachts of similar sizes and will be able to reach a top speed of 30 knots.Her main feature is the middle entrance of the yacht, which allows tenders with a draft of up to 1.5 meters to moor inside the private port/garage.Saturnia can be configured to different layouts to obtain 10 or 20 suites for passengers and up to 20 crew members. Several pools and alfresco dining areas and a glass-bottom lounge will be also located on board.The five-deck concept is imagined to have a hybrid propulsion system, consisting of twin side diesel engines and a central electronic water jet device.Pagurus is one more nature-inspired concept by Lazzarini Design Studio. The futuristic swan-shaped Avanguardia is another. Credits: Lazzarini
July 22, 2021
All news