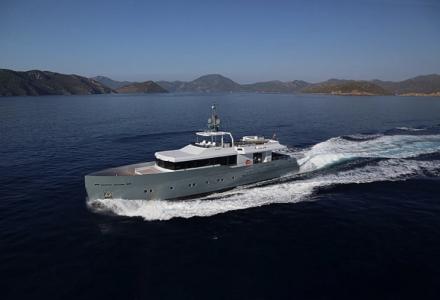 Only Now is a 34.6 m luxury motor yacht. This beautiful semi-displacement vessel has been just recently sold thanks to David Westwood and Vedat Kohen of TWW Yachts. 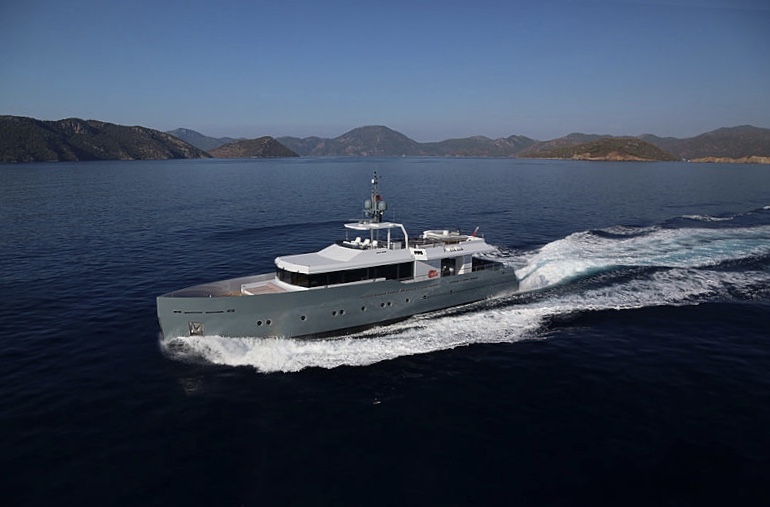 With a beam of 7.5 m and a draft of 1.7 m, she has a epoxy/wood hull and epoxy/wood superstructure. This adds up to a gross tonnage of 198 tons. 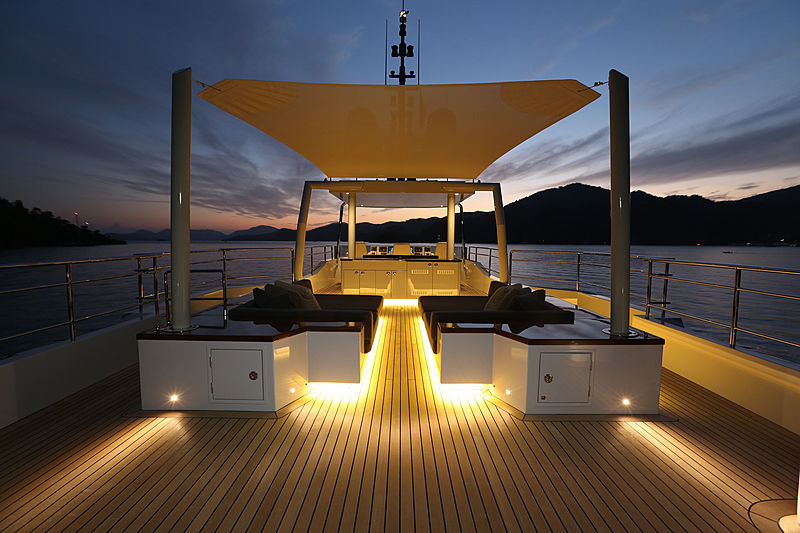 Only Now was built by Tansu Yacht and delivered in 2012. The Turkish shipyard, which has been building yachts since 1996, makes purposefully small production, with only one or two boats built at a time, allowing the yard to focus on quality. 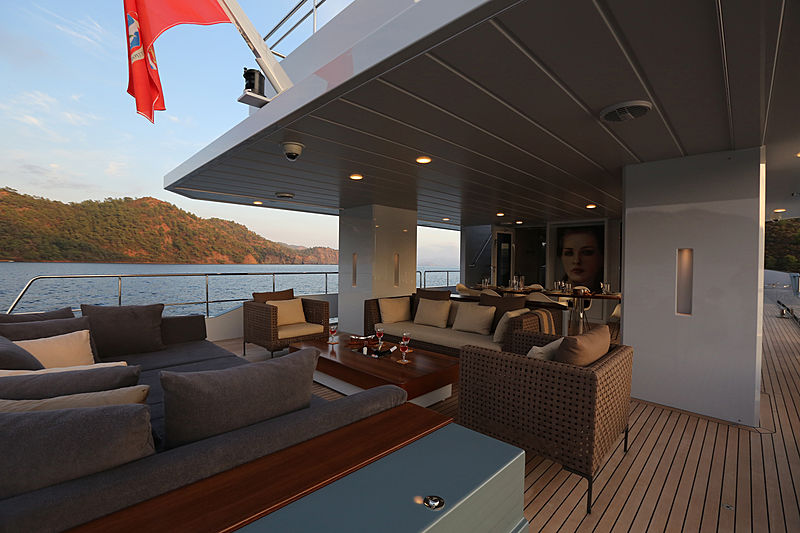 The vessel is powered by two Caterpillar C-32 diesel engines of 1700 hp each giving her a maximum speed of 22 knots and a cruising speed of 18 knots. Only Now's maximum range is estimated at 900 nautical miles. 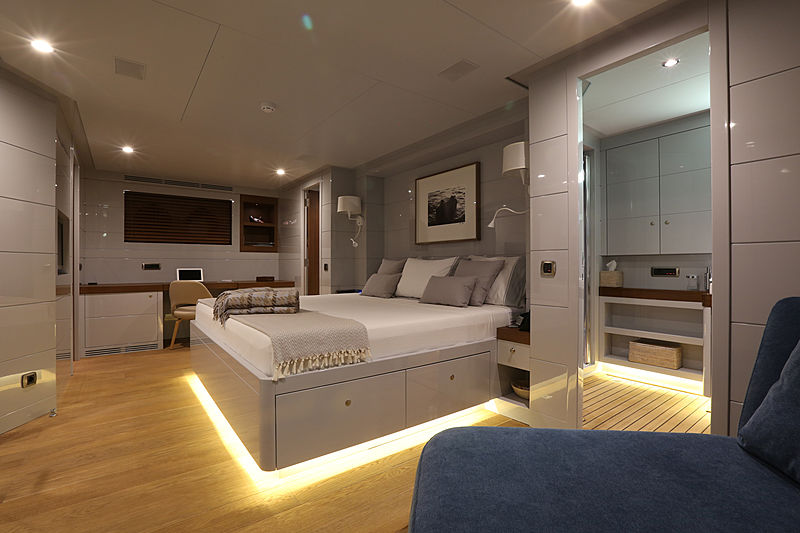 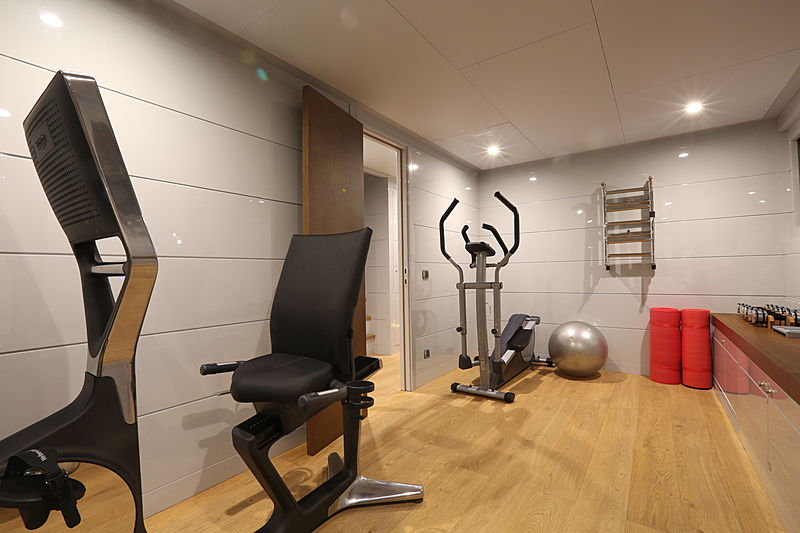 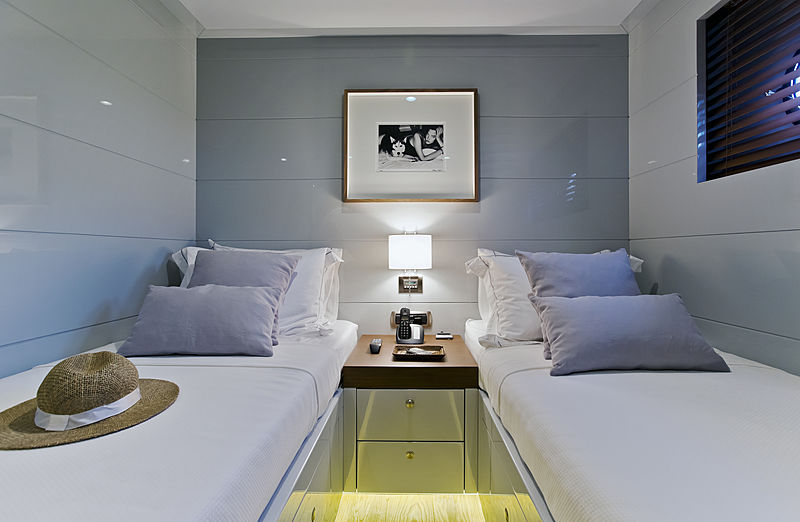 The motor yacht can accommodate up to 8 guests in 4 well-appointed staterooms, including a spacious owner's cabin, and 2 guest cabins. There is also a big list of toys and the large swim platform onboard. 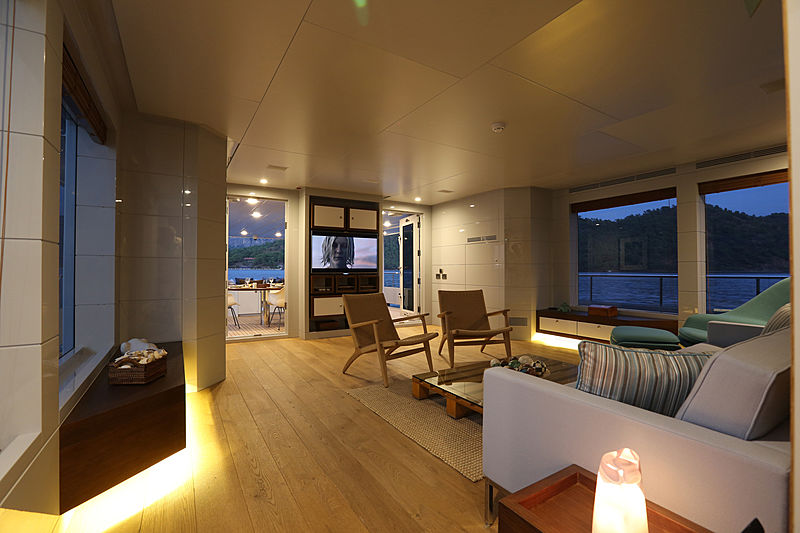 With naval architecture by Diana Yacht Design, the breathtaking superyacht has both the exterior and the interior design by Tansu Yacht Design. 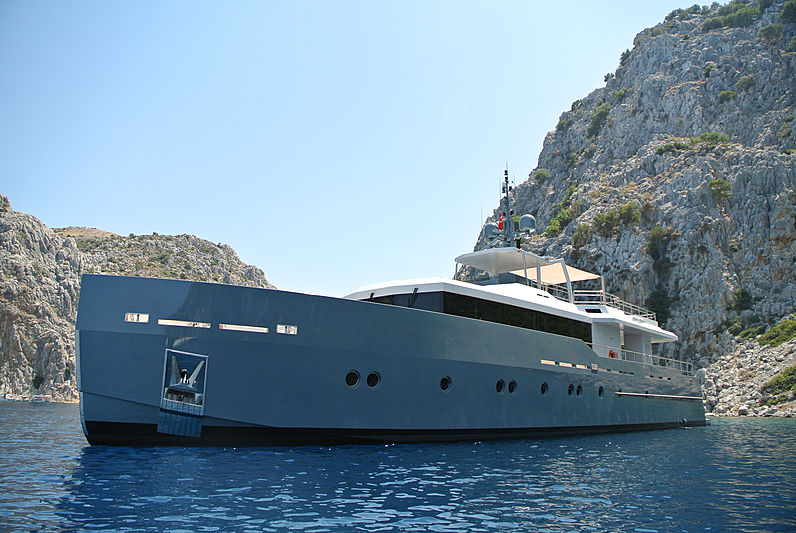 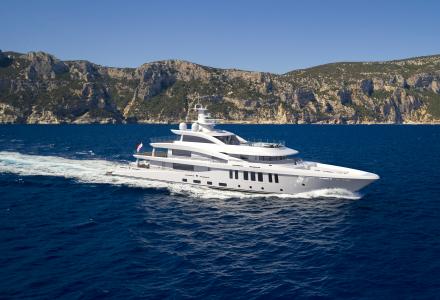 Amels and Damen Yachting Has Announced the Sale of the Third Amels 200
The team at Amels and Damen Yachting has announced the sale of the third Amels 200.This 60m Limited Editions design, an evolution of the Amels 188, has the unmistakable Tim Heywood’s exterior design. Whilst the Amels 200 shares much of the naval architecture, high volume (Gross Tonnage of 1,015) and hybrid electrical power technology as her predecessor, the design also benefits from the additional length. In line with the exterior design pedigree, the custom interiors will also be the work of an industry design master. The client has selected Winch Design for the interiors. For British design bureau this Amels 200 will be their first from this design series. "We are both proud and excited to be building this new 60m Amels 200 for our client. This is a yacht which combines original design and high volume with exceptional functionality to really provide the ultimate luxury yachting experience. We very much look forward to embarking on the build journey with them,” says Rob Luijendijk, Amels and Damen Yachting Sales Director.Earlier this year, Amels and Damen Yachting launched the first two Amels 200 which will be delivered to their owners in the coming months. As per the first two yachts from this design, this Amels 200 also features a four-deck elevator, air-conditioned gym on sun deck, large aft decks and swim platform and full-height windows in the owners suite. Volpini 2 was the first yacht delivered from the original Amels 188 design.The third Amels 200 is scheduled for delivery in early 2024. Damen Yachting, a division within the Damen Shipyards Group, was created in 2019. The division combines the pedigree and heritage of Amels yachts with a growing portfolio of SeaXplorer yachts and Yacht Support vessels.Credits: Amels
May 7, 2021 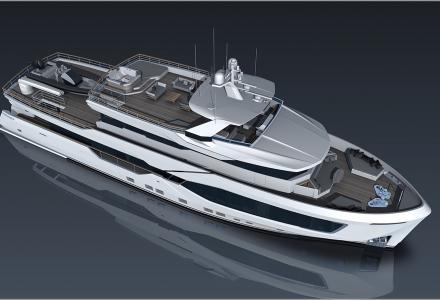 Denison Yachting Has Sold the Second Hull of Numarine 37XP
The Numarine 37XP hull #2 was sold by Denison Yachting broker Alex Clarke for a repeat Numarine owner. “I’m delighted to confirm that we have sold another superyacht in the successful XP Series and I would like to thank our partners, Denison Yachting, for what they did to make it happen,” said Ali Tanir, Sales and Marketing Manager of Numarine. “The American Market is our number one priority and with a great product and a strong partner we believe we are changing the game.”The Numarine 37XP is an expedition yacht. She has the same beam as the 32XP, yet four meters were added forward of the engine room bulkhead adding to the guest and crew accommodation volume as well as the upper deck and sky lounge. Hull #2 features a 6-cabin layout that can accommodate 14 guests plus crew accommodation for 9, including the captain’s cabin on the upper deck. Key highlights include a TV room on the lower deck, a hot tub on the upper sundeck, a huge boat deck that can carry a 28-foot tender and 3 jet skis and a designated beach club area back aft.She boasts an impressive 5,000 nautical mile range at 10 knots and 6000 nautical mile range at 8 knots.“It has been an absolute pleasure working with Numarine during this entire sales process. They are pushing hard to really establish themselves in the American market and this sale is a step in the right direction,” says Alex Clarke, Denison Yachting.The Numarine 37XP Hull #2 is scheduled for an April 2022 delivery.Numarine, the European high-performance motor-yacht shipyard, headquartered in Istanbul, offering a range of yachts from 19 to 45 meters.Credits: Numarine
May 7, 2021 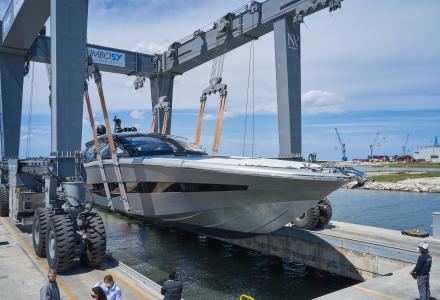 ISA Super Sportivo 100ft GTO Has Been Launched in Ancona
ISA Super Sportivo 100ft GTO was launched at the Palumbo Superyachts Ancona shipyard. The exterior and the interior design were penned by Marco Casali (Too Design), the naval engineering was made by Palumbo Superyachts. In terms of performance she can reach the impressive speed of 50 knots thanks to her three MAN 2000 HP engines. The concept of ISA Super Sportivo 100ft GTO focuses on the maximum enhancement of the values of sportiness and seaworthiness in an open vessel.The sleek lines are accentuated by the high deep V-shaped bow and by the profile angle rapidly decreasing towards the aft. The sizeable open surfaces available forward and astern make it a unique product in its category, while the large opening glass panels of the hardtop still ensure maximum comfort even in the covered areas of the cockpit. The boat performance is stylistically amplified by the big air intakes playing a dynamic role when positioned above the hard top.The interior, available in several options from three to five guest cabins in addition to the two crew cabins, are totally customizable and characterized by a design aimed to maximise light and confer an iconic architecture on spaces.The ISA Super Sportivo 100ft GTO will premiere next September during the Cannes Yachting Festival 2021.Palumbo Superyachts began to take root in 2008, when the Columbus Yachts brand was established, and in 2011 launched its first 54 metre superyacht, emblematically christened “Prima” (“the First”). Currently, Palumbo Superyachts comprises a representative office in Monaco and a logistics network of five shipyards in the Mediterranean (Ancona, Malta, Marseille, Naples, and Savona), and also operates the following brands: ISA Yachts, Columbus Yachts, Mondomarine and Palumbo SY Refit.Credits: Palumbo Superyachts
May 7, 2021 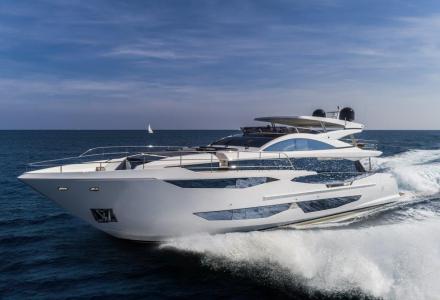 Pearl Yachts Starts 2021 With Strong Orders And Deliveries
Pearl Yachts has announced the strong sales and deliveries. The first three months of 2021 have been ultra-busy for British luxury motor yacht builder Pearl Yachts. Baxter Marine, Pearl Yachts’ longest-serving dealer, have demonstrated the growing international demand for Pearl’s line-up. No fewer than four new-boat contracts have been signed since the new year: a Pearl 95, two Pearl 80's, and a Pearl 62. A similar number of brand-new boats have been handed over to their eager owners: Another Pearl 95 and 4 more Pearl 62s. The slowdowns in global supply chains and new safety restrictions are little match for the experienced Pearl team.Pearl 95Baxter Marine has just handed over the third Pearl 95 to her owner in Palma, Mallorca, and Pearl’s US dealer, Atlantic Yacht & Ship Co, has now completed the sale of another Pearl 95 to an American client. The latter boat will be based in Miami, Florida. The next-available Pearl 95 will be ready for delivery towards the end of this year.Pearl 95 interior Two Pearl 80s – the seventh and ninth of this increasingly popular mid-size model – have been sold to clients intending to keep their boats in Palma, Mallorca, and Montenegro respectively. The eighth unit of Pearl 80 is already in Fort Lauderdale, Florida, and is available immediately and the 10th will be ready for delivery towards the end of this year.Pearl 80The fourth and fifth units of Pearl 62 are being shipped imminently to France and the USA, the 6th and 7th have British owners and will hand over in the UK this summer and autumn, and the eighth will be exhibited at the Dusseldorf boat show in January 2022. Pearl 62“Despite the pandemic, Pearl Yachts has never been busier,” says Managing Director Iain Smallridge. “There are several reasons why we are experiencing record sales. First and foremost, our model range and designs are so strong, thanks to Bill Dixon’s immensely experienced studio, which is responsible for all the exterior lines, naval architecture and space planning, and our stunning and award-winning Kelly Hoppen interiors. In addition, every Pearl model has several unique features, which makes them really stand out from the crowd. Pearl’s high build-quality and keen pricing means we make most owners shortlists and, last but by no means least, we now have an impressive dealer network in the Mediterranean and the USA that not only makes the brand more accessible, but also delivers exceptional after-sales service.”Pearl 62 interiorPearl Yachts was founded in 1998 and has now become one of the UK’s most prominent shipyards. Every Pearl motor yacht is designed and built by experienced craftsmen. Pearl’s fleet consists of the new Pearl 62, the Pearl 80 and the Pearl 95. All newly launched Pearl Yachts are covered by a unique, comprehensive five-year warranty program.Credits: Pearl Yachts
May 6, 2021 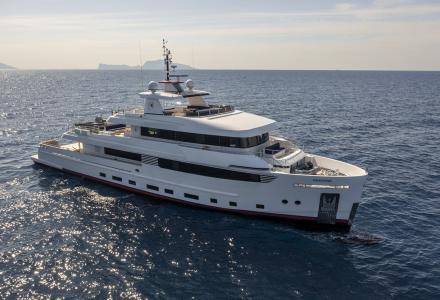 Design: Tommaso Spadolini Reveals Exterior and Interior of the 42m Crowbridge
The 42m Crowbridge by Cantiere delle Marche is made for very experienced repeat clients of Tommaso Spadolini who have owned several previous yachts, although all of them have been planing hulls. The yacht was launched in June 2020. The owners decided to make the switch to a custom displacement yacht for family reasons and wanted to cruise in more leisurely comfort. Crowbridge has a top speed of 15 knots and an economic cruising speed of 10 knots. This took something of a mind-shift as the owners were more accustomed to making fast transfers at 25 knots. But with a beam of 8.5m the explorer has much more space and her round-bilge hull with bulbous bow means she can venture out in weather that would keep a planing yacht in port, explains Tommaso Spadolini. “The owners had several specific requests, starting with the clean and sober profile as well as generous interior and exterior as they spent several weeks at a time on board. These may seem like common requirements for a large yacht, but he and his wife approached the project with very precise ideas of how they wanted the private and social areas to be set up,” says Tommaso Spadolini. “We worked closely with Sergio Cutolo’s HydroTec studio to maximize the internal volumes and in the superstructure we managed to create the perfect compromise between the interior layout and both the size and positioning of the large windows. An unusual request was to have six ensuite guest cabins on the lower deck – three double cabins for the owners’ sons and three twin single cabins for their grandchildren – which is rare on a yacht of this size”.Here are some details of the Crowbridge's design. The family preferred a traditional salon and dining room on the main deckThe master stateroom includes a private study, a big walk-in wardrobe, separate His and Hers bathrooms with a common shower stall, and a day sofa that converts into a bed The sundeck has a saltwater hot tub, bar unit and small dining loungeThe original design had a side-loading tender garage in the stern, but on reflection the owners decided to house the tender on the upper deck aft and dedicate the garage to toys such as an Optimist and a Laser sailing boat, which are deployed from the central transom staircaseCdM’s story begins in 2010. Since 2015, the shipyard is the world’s leading builder of explorer yachts. Cantiere delle Marche builds long-range, luxury yachts and superyachts from 26m to 40m in length.Credits: Tommaso Spadolini
May 6, 2021
All news