Amsterdam studio Isaac Burrough Design has revealed a 110-metre superyacht concept. Inspired by Māori guardian of the ocean ‘Kiwa’, this motor yacht concept was named after it.

The studio, located in The Netherlands, is headed up by designer Isaac Burrough, who has a life-long passion for yachting. Since the launch of his own design studio in 2018, Burrough released five concepts to the public, most of them being below 60m, until now.

Burrough said about the project:

The intention for Kiwa was to design a yacht that is both modern and elegant. Her sleek silhouette combined with curvaceous surfaces gives grace despite her exploration capabilities. A yacht that will look sophisticated whether cruising the Mediterranean or the Arctic

According to Burrough, the Kiwa concept "reimagines sustainable seafaring" because of its hybrid propulsion package, more than 200 m2 of solar panels and a low volume to length hull. 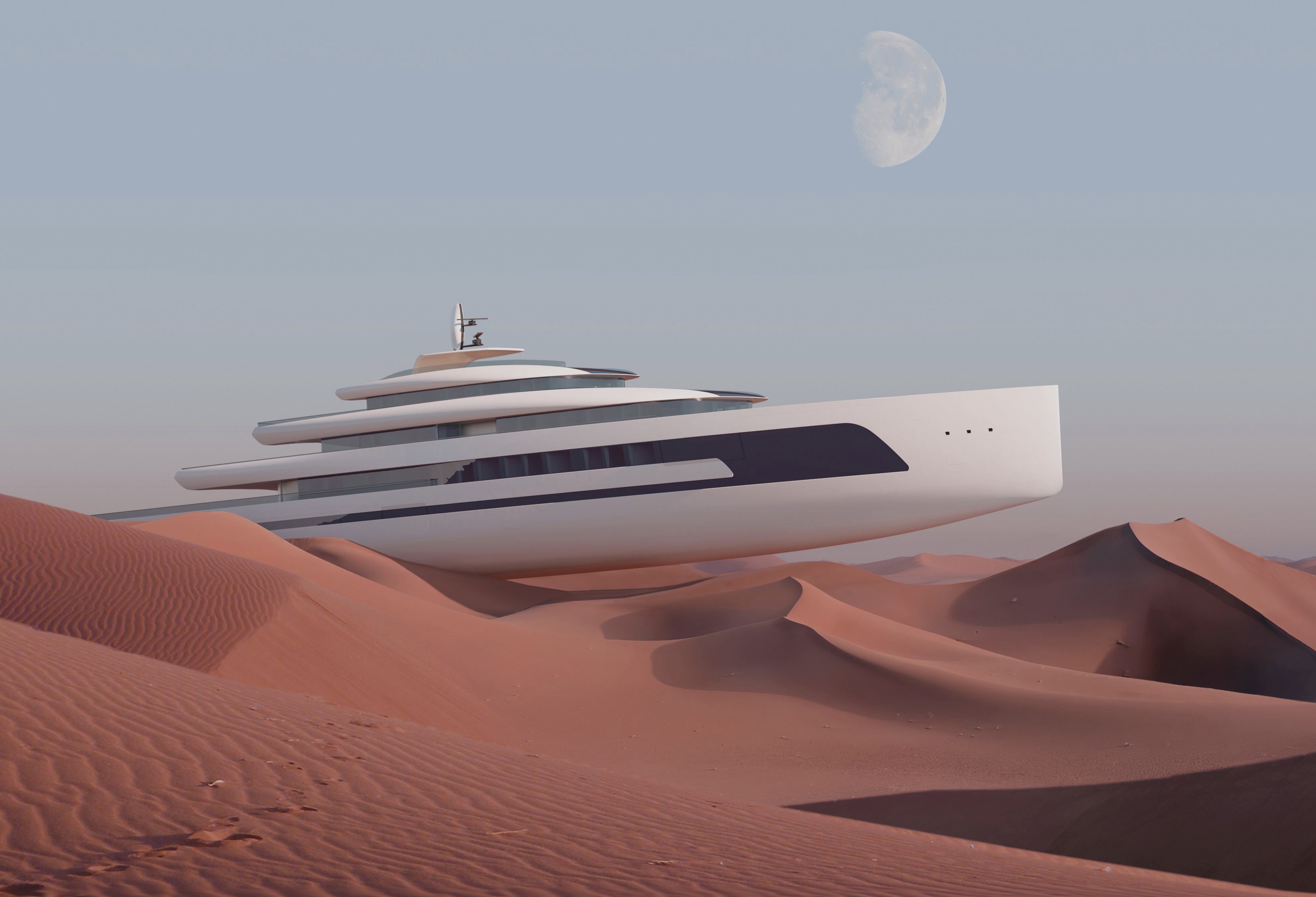 It is impossible not to notice such amazing exterior highlight of the vessel, as the glass-bottom pool that forms the centrepiece on the main deck aft. Across 175 square metres of storage space guest toys and tenders, including two guest tenders of 12 and 7 metres as well as two crew tenders of 7 metres are included. The forward helicopter pad is made for a H145 helicopter. In total 14 guests and 29 crew members can be accommodated onboard. 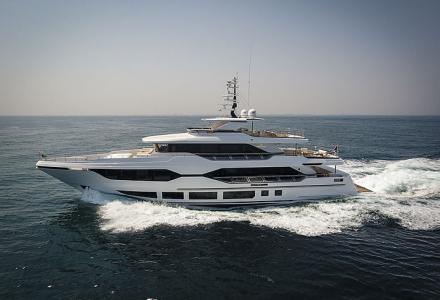 Take a look inside 37m Majesty 120
Majesty 120 is a stunning 37.07-metre luxury yacht, which was first announced as the new flagship of the UAE yard Gulf Craft during the 2019 Monaco Yacht Show.Gulf Craft is happy to announce that the first unit has completed sea trials and is listed as a yacht for sale. She features a naval architecture and an exterior design by the yard.The interior designer Cristiano Gatto created a space for up to 10 guests to stay in five staterooms with an asymmetric design.Cristiano Gatto, the designer said:For me, the Majesty 120 perfectly captures the direction in which this innovative brand is heading with her dynamic profile, balanced outdoor spaces and sophisticated interiors that are all designed with true yachtsmen and women in mind.Gatto described the interiors as “fresh and light”, with key materials includes “lacquer, light woods and marble.”The vessel is the first Majesty model equipped with fully airborne electric drive equipment, leaving only two 2600-hp MTU engines and diesel generators.The highlights of the boat include a Jacuzzi on the sun deck and a ‘hybrid’ beach club, converting to a tender storage.
August 10, 2020 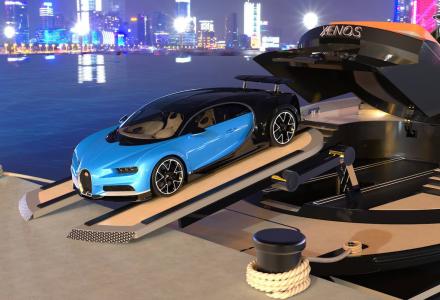 New design concept: high-speed 40m yacht Xenos with Bugatti supercar
Italian designer Pierpaolo Lazzarini unveils his latest yacht concept 39.9-metre Xenos. This bullet-shaped hyper yacht concept was inspired by Bugatti and aims to be the fastest superyacht in the world in its class. The design combines futuristic performance with luxury spaces. The energy company Architaly has integrated a solar system into the roof, which will let Xenos to be capable of up to eight hours of autonomy in electric sail mode.There are two available versions for this custom yacht: the Hyperyacht and the Seajet Piercer. The Seajet Piercer will be for a passenger transport version since it can carry up to 180 passengers. The Hyperyacht is designed to be a private recreational vehicle.The Hyperyacht version features a deck lounge, living room, threespacious suites and a large lounge at the top. To the aft, guests can store water toys and use the adjustable bridge to allow the fabulous Bugatti to come in and out.The $39,000,000 Xenos comes with a $3,000,000 luxury supercar Bugatti Chiron. Made from aluminium and carbon, modern shape of the Xenos is designed for comfortable high speed rides and equipped with twin, triple or quadruple engine set ups with horsepower range from 7,300 hp to 15,000 hp. Xenos will reach a top speed of 90 knots, setting the record of the fastest yacht in her size.
August 7, 2020 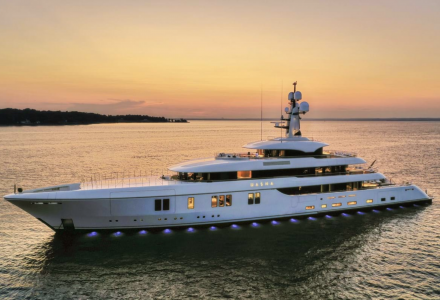 Australian millionaire’s 73m superyacht Hasna has been sold
Hasna is a 73-metre luxury motor yacht, built by Feadship in 2017. She has been the first yacht in Dutch shipbuilding history ordered by an Australian customer. According to Forbes, the superyacht has been owned by Australian loan magnate John Symond and believed to cost him $75million. She has been listed for sale asking € 97,500,000 two years after delivery. Later the price was reduced down to € 92,500,000 and she was sold and renamed Lunasea, thanks to Y.CO and Burgess.Gary Wright, Co-Founder and Chairman of Y.CO commented:Hasna marks the third Feadship Y.CO has sold in recent weeks and demand among our clients for well-built, quality yachts remains strong. Completing a sale of this magnitude in the current climate has taken an extraordinary amount of commitment from everyone involved and we would especially like to thank the Captain and crew for their support throughout this sale.We are pleased to be taking over the operational and charter management of the yacht - under her new name of Lunasea - and our team is already working closely with the new owner’s team and crew to transform the onboard experience and strengthen her charter reputation.With a beam of 11.9 m and a draft of 3.45 m, she has a steel hull and aluminium superstructure.The highlights of the superyacht include an 8m infinity pool on the main deck aft, a 10-seat cinema on the main deck, a wellness centre with a massage room, a hairdressing salon, an elevator, a sun deck lounge with inside-outside bar and a jacuzzi.Ben Ritchie of the Y.CO sales team said: We are thrilled to have secured this very recent and exceptionally well-maintained Feadship on behalf of our client. Not only does Hasna exude quality, but she has every amenity you could possibly want on board, which we anticipate will make her extremely popular on the charter market. With stunning interior and exterior design by RWD, we believe Hasna to be one of the finest Feadships ever built and we are pleased to add her to our Y.CO Management fleet and to be able to offer her for charter.Hasna was designed by Redman Whiteley Dixon and can accommodate 12 guests in six staterooms, including a full-beam owner’s suite is located on the main deck, two VIP staterooms, two double cabins, and a further double cabin on the bridge deck. Also, the superyacht offers accommodation for a crew of up to 21. Twin MTU diesel engines provide her a top speed of 16.6 knots and a cruising speed of 14 knots, with a transatlantic range of 5,500 nautical miles at 12 knots. She is powered by MTU engines of 1850 hp each.
August 6, 2020 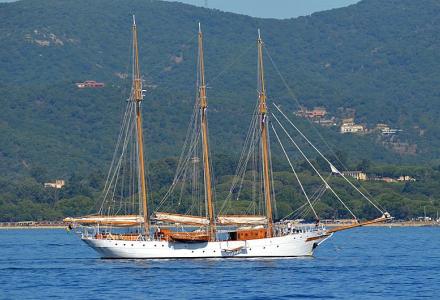 Spotted: 1927 classic sailing yacht Trinakria in St. Tropez
The legendary yacht Trinakria, which has been launched in 1927 in Austria at the Wienerwerft in Vienna, was seen in St. Tropez. Trinakria is a 49.06-metre luxury sailing yacht.The gaff-rigged schooner a steel hull and wooden superstructure. Trinakria was entirely refitted over a 10 year period, from 2004 to 2014. The refit started in Agadir in Morocco at the luxury yacht builder Chantier Naval HESARO. Unfortunately, technical difficulties and the failure of the local shipyard lead to a long and ambitious eight years refit. However, in 2012, she was sailing to La Rochelle. It took two more years more to complete all the works.Her interiors have been returned to their former glory, featuring warm polished woods, classic white planked ceilings and crafted leather furnishings.The sailing yacht can accommodate 10 guests in five traditional, yet luxurious staterooms, each with private ensuite facilities. Her decks are laid to teak and offer a vast amount of area to relax, socialize and sun. The main deck has 2 alfresco dining options, one just forward of the helm, seating guests comfortably under a Bimini cover if requested. This deck is raised providing uninterrupted views. An additional alfresco dining table is forward, in a more intimate setting, perfect for casual dining.With a beam of 7 m and a draft of 3.3 m, Trinakria is powered by CAT engines and has a cruising speed of 10 knots. This magnificent yacht can often be found cruising the Mediterranean, where she is available for charter with the price about €70,000 - €80,000 per week.
August 6, 2020 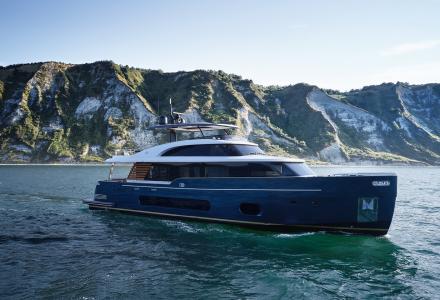 New interior details of the first high-tech Azimut superyacht Magellano 25 Metri
Italian builder Azimut Yachts has completed the Azimut Magellano 25 Metri and revealed first pictures of the boat. She is their first 25.2-metre pocket superyacht, which was created in collaboration with interior designer and architect Vincenzo De Cotiis. Exterior designer Ken Freivokh was responsible for “chic and sophisticated” exterior lines.Built in GRP and carbon fibre, the pocket superyacht was created to "convey the feeling of a penthouse overlooking the sea" because of her fully glazed superstructure, the yard said.The vessel can accommodate up to 10 guests across five cabins including an owner’s suite, which features a walk-in wardrobe and polished brass details, two VIPs located on the lower deck, one double and one convertible twin cabin.There are other stylish highlight of the boat design such as “retro-style” windows in the hull and slatted teak panels either side of the aft deckhouse. There is a large lounge area and an ‘infinity terrace’ at the bow area, which is perfect for warm weather cruising with sofas, converting into sunbeds and a bar aft and an outside dining under a retractable sunroof. The boat features twin MAN engines with 1,400 hp each, a Humpree electric fin stabilisation system, and a V-Drive in-line transmission. She can reach a top speed 25 knots or cruise at 21 knots.
August 5, 2020
All news