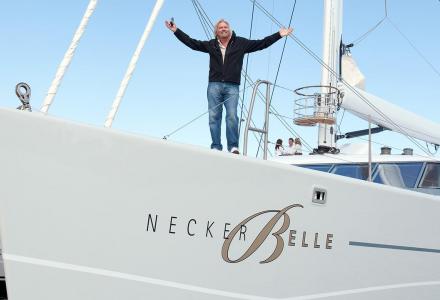 Yachts, which are owned by celebrities will definitely fascinate you, just like their impressive owners. Sometimes these famous people just want to escape and enjoy a luxury vacation without being recognized. There is no better way than to do it aboard a superyacht. 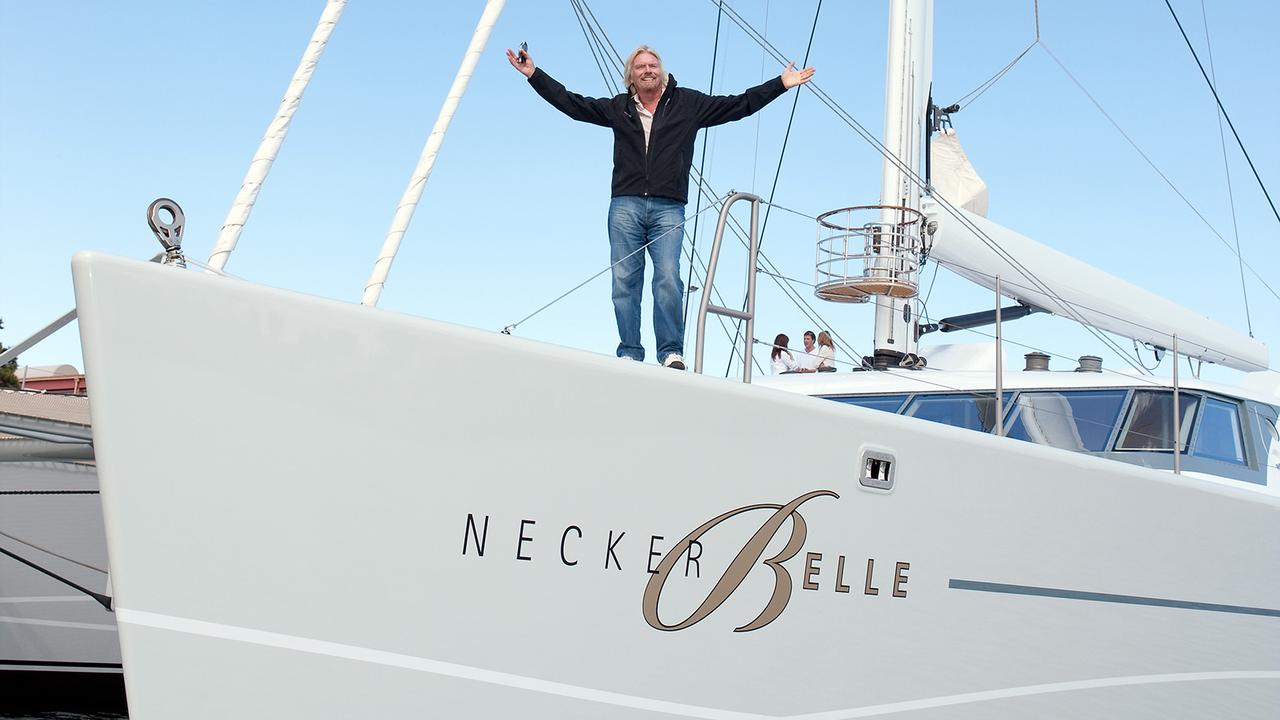 Richard Branson, the prolific British billionaire and mastermind behind the Virgin brand, is known for his creative and extravagant ideas. He loves to enjoy the escape from the stresses of business life on his private Caribbean island. The 32 metre catamaran superyacht Necker Belle was named after his island hideaway, Necker Island, in the British Virgin Islands, which is one of the most exclusive private islands owned by celebrities. The legendary boat was sold by Branson to an undisclosed buyer in August 2018. Richard said in an interview: 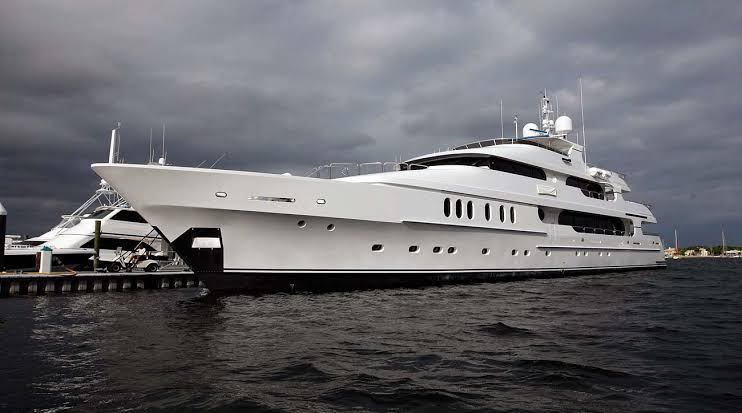 Known as one of the best golfers in the world, Tiger Woods is an owner of a yacht with a very symbolic name Privacy. Woods reportedly paid around $20 million for Privacy when he purchased it in 2004. Well, with an estimated net worth around $800 million, he definitely could afford it. 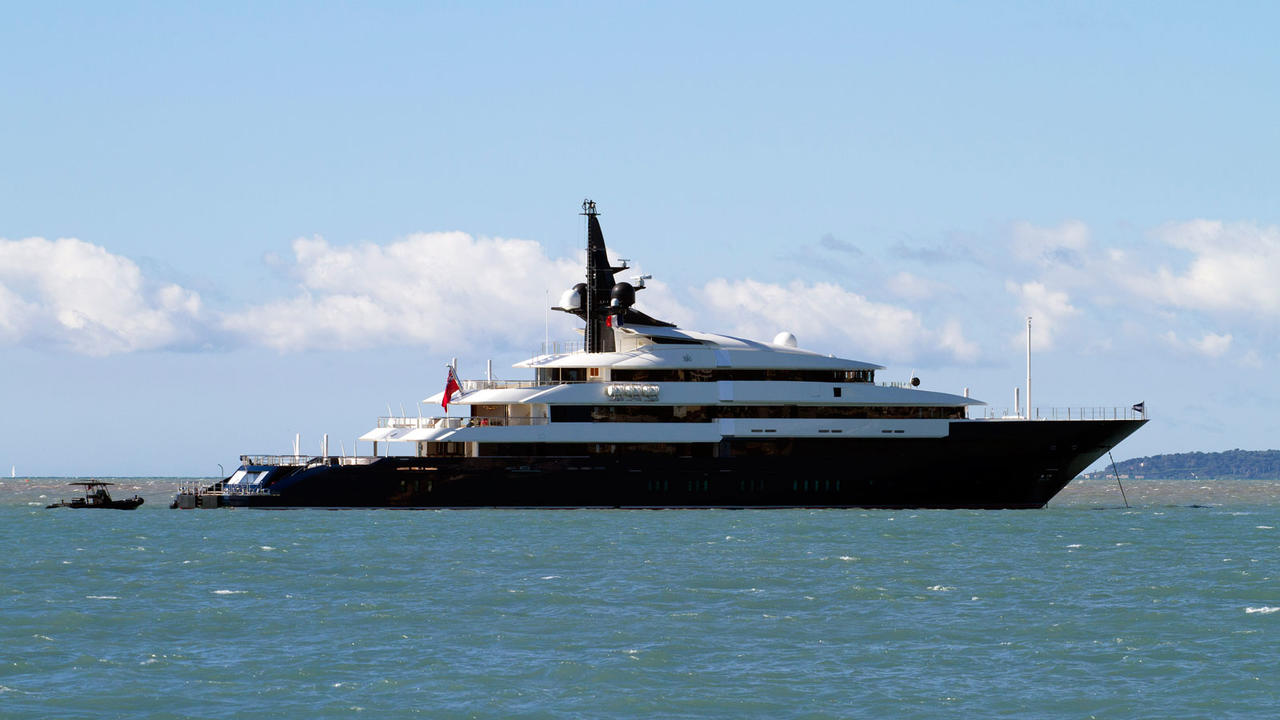 Top Hollywood director Steven Spielberg reportedly has a net worth of more than $3 billion. No wonder, he can easily afford a luxury 86 metre superyacht! Seven Seas was built by Oceanco in 2010 with a refit in 2016 . With such a cinematic owner, of course the boat features a cinema screen as well as one of the best superyacht infinity pools with a 15-foot glass wall. She accommodates 12 guests and can reach a maximum speed of 20 knots. 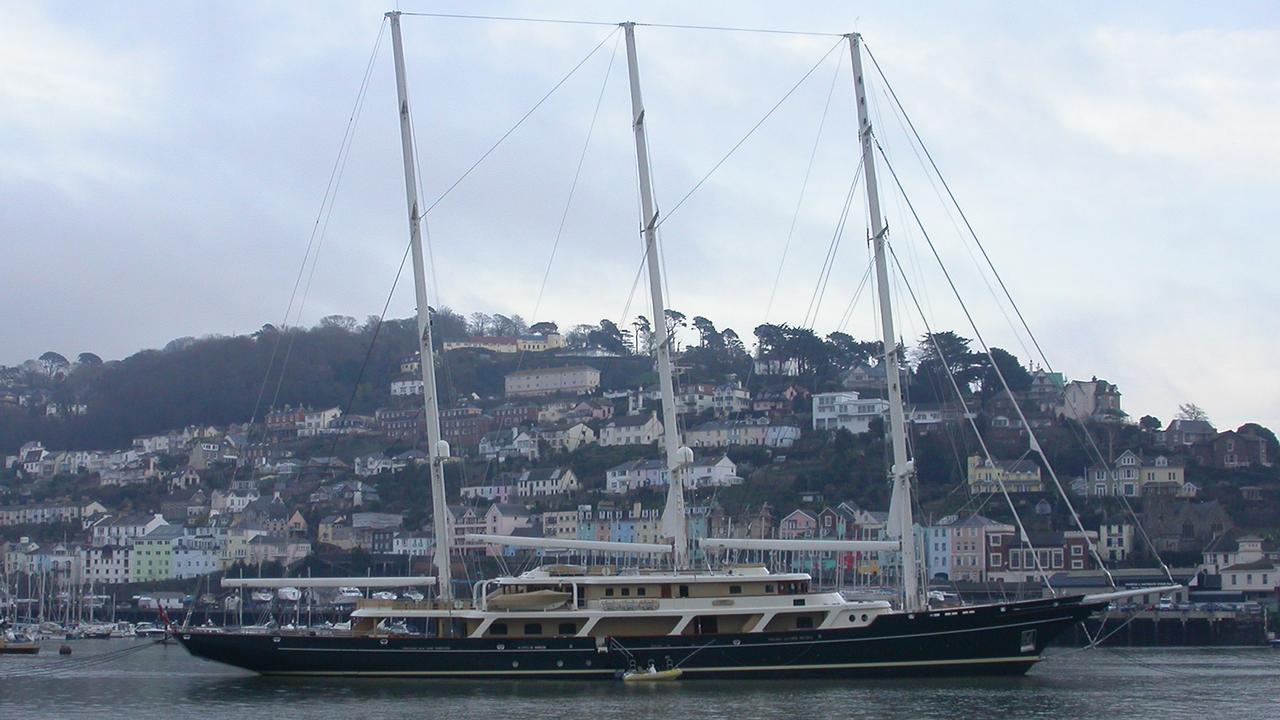 EOS is a 92.93m luxury yacht, built by Lurssen and delivered in 2006. The schooner, which is one largest private sailing yachts in the world, was bought by fashion designer Diane von Furstenburg and her husband IAC Chairman Barry Diller in 2009. Her exterior design was created by Bill Langan and interior design by Francois Catroux. EOS offers accommodation for 16 guests and 21 crew. 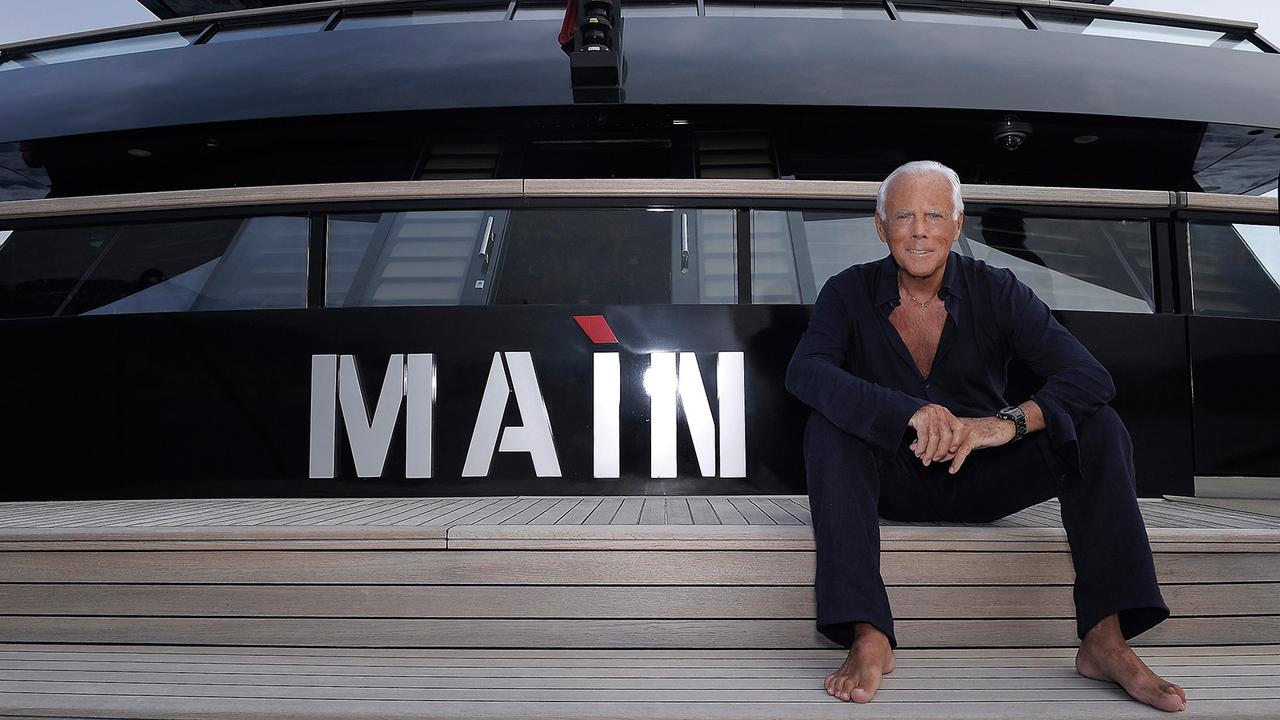 Legendary fashion designer Giorgio Armani has recently celebrated 40 years of life at sea. Armani designed the Codecasa superyacht Main himself. With the length of 65 meter, she is one of the largest yachts built in Italy, which can easily be recognized by her stylish dark green hull color. Main’s interior configuration enables comfortable accommodation for up to 12 guests within 7 cabins. With a net worth of $8,2 billion, buying such a luxury yacht is not a big deal for him. 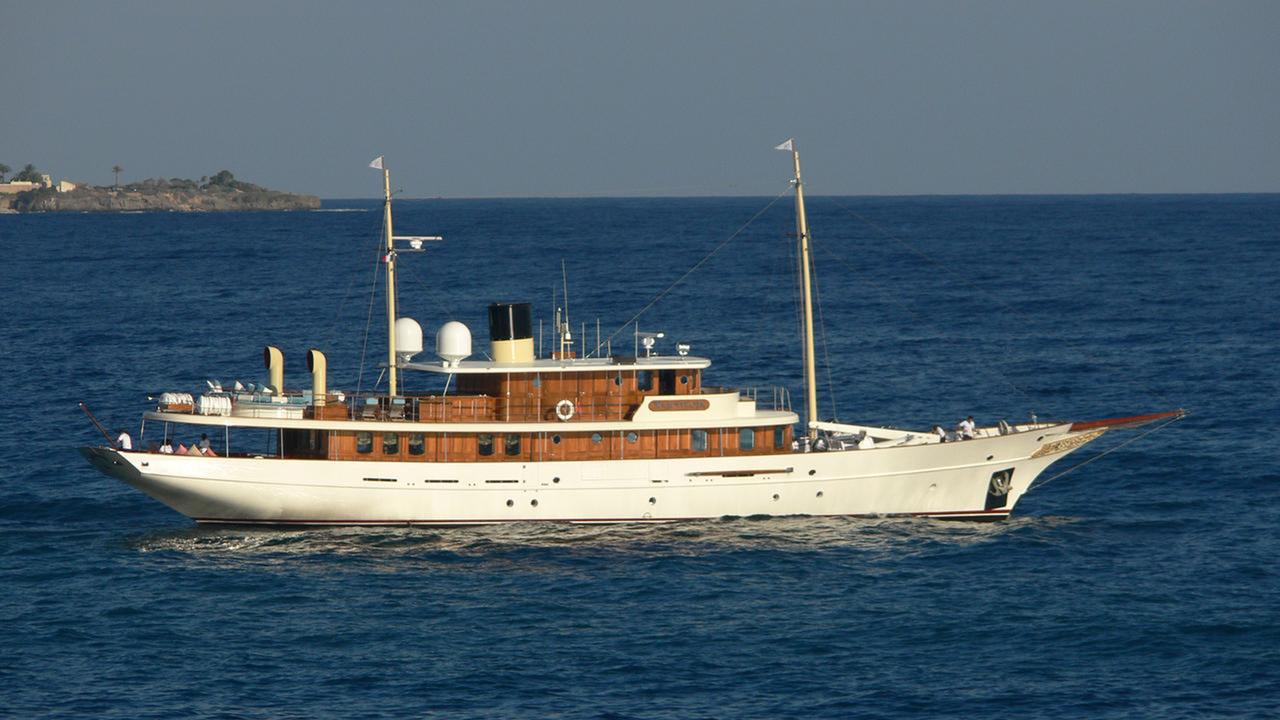 Isn’t it nonsense if Captain Jack Sparrow wouldn’t have his own vessel to sail the seas? Johnny Depp owned a classic superyacht with a length of 47 meters. The name of the yacht is  “Vajoliroja” and comes from a combination of names in the Depp family: “Va” for Vanessa Paradis his girlfriend, “jo” for Johnny’s own name, “liro” after Depp’s daughter Lily Rose, and “ja” for Depp’s son Jack. It was sold it for about $27 million in late 2015 or early 2016. The new owner later sold it to J.K. Rowling (the author of Harry Potter), who renamed it Amphitrite and made it available for purchase and charter. Could Little Harry even dream of such accommodation when he was living in the cupboard under the stairs? 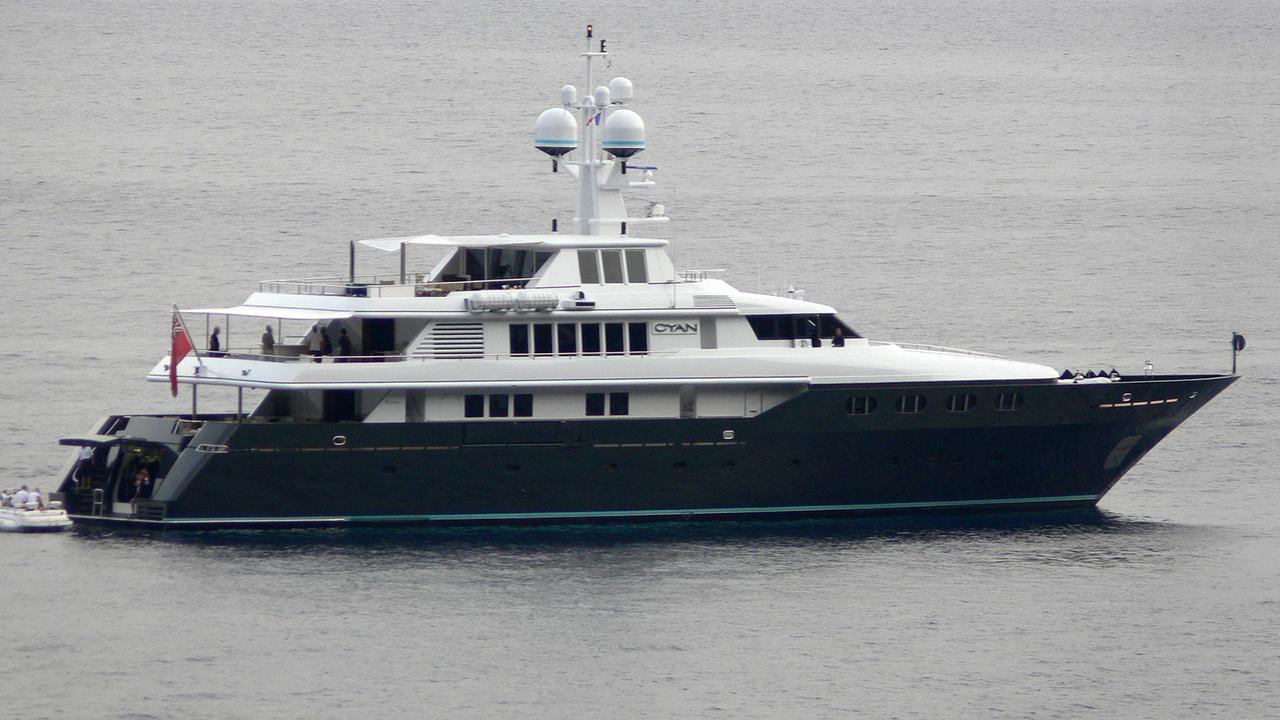 It’s great to be a member of U2, especially Bono and The Edge, who share the uber-luxe yacht Cyan. The guys don’t have to force a “Beautiful Day” on this amazing yacht featuring an “outdoor cinema screen” and plenty of toys for the water. The 48.71 metre motor yacht was launched by Italian builder Codecasa in 1997 but has been kept in like-new condition and is now available to charter with Burgess. 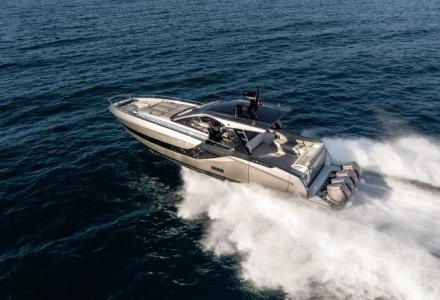 Azimut Yachts Reports Excellent Results in the United States
The success of Azimut Yachts products on the US market, where dealer MarineMax operates process by teamwork with the company, is backed up by the numbers: in the brand’s leading market, Azimut Yachts reported 27% growth in the quarter from April to June 2021, with the delivery of 25 new units totalling 472.4 meters. This result represents a 27% rise compared with the same period last year. The average length of yachts has also increased and now stands at 19 meters, up 15% compared to last year.Trideck external viewThe two most popular collections are the top of the range Grande Collection, which with deliveries up 75% confirms the growing interest in larger models, also highlighted by the US debut at the Fort Lauderdale International Boat Show in October of the new Trideck, and the Verve Collection, which has reported spectacular results with the Verve 47, a product developed specifically for the US market that has sold 45 units in just a year and a half since the launch. The popularity of this model has exceeded all expectations and prompted the shipyard to create a smaller version, the Verve 42, which will be unveiled in world preview in Fort Lauderdale, but retail contracts have already been signed for ten units.Trideck external view“Americans love Azimut yachts more than ever,” says Federico Ferrante, Azimut-Benetti Americas President. “In recent months in particular, we have seen steadily increasing interest in all the products in the range, from the super sporty Verve models to our largest yachts, including the new Trideck flagship. The notoriously knowledgeable and demanding American public is particularly appreciative of our proven capacity for product innovation, of the fact that we offer technologically advanced models with a rich array of highly intelligent design solutions. As well as recognising the great reliability of our after-sales service.”Verve 47 RunningAzimut Yachts is an Azimut Benetti Group brand. With its Atlantis, Magellano Flybridge, S, Verve and Grande collections, it offers the widest range of 34- to 125-foot yachts.Credits: Azimut Yachts
August 2, 2021 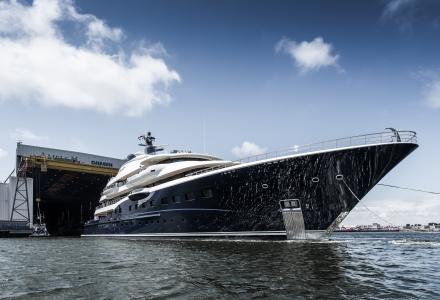 Amels Unveiled First Pictures of ‘Here Comes the Sun’ After Refit
A year after arriving at Amels and Damen Yachting shipyard in the Netherlands, the Amels refit Here Comes The Sun has been successfully launched after a large-scale rebuild. In a milestone moment for the largest Amels delivered to date, the now 89m yacht unveiled her new colour.Here Comes The Sun was originally delivered in 2017. The yacht returned to Amels and Damen Yachting in 2020 under new ownership for an extensive refit. The changes include the new colour, an extended sun deck aft with helicopter landing area, extended bridge deck aft accommodation with 2 VIP suites with exterior balconies and alterations to a number of deck and interior areas and layouts. The 6m extension to the main deck aft also provides a larger beach club, spa facilities and a large 7m swimming pool.For the refit design and naval architecture, the owner appointed the yard’s original partner for the naval architecture, Azure Yacht Design, to re-pen this Amels from 83 to 89 meters.“Welcoming any of the fleet back to the yard is always done with pride but for Here Comes The Sun, it runs even deeper. She represents the first step back towards full custom and bigger projects. Many of the same craftsmen and women who were meticulously involved in the original build have been working on her during this refit, remoulding and reshaping her into the new masterpiece she is set to become. Her launch is a very proud moment. Her additional length and brand new colour are stunning and we look forward to the final stages of the refit now coming together for delivery to her owner later this summer,” says Michel Coens, Damen Yachting Sales Manager.Damen Yachting, a division within the Damen Shipyards Group, was created in 2019. The division combines the pedigree and heritage of Amels yachts with a growing portfolio of SeaXplorer yachts and Yacht Support vessels.Credits: Amels
August 2, 2021 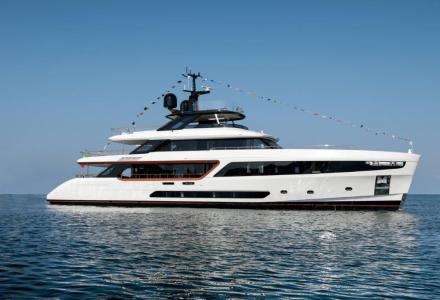 First Motopanfilo 37m Launched by Benetti
Benetti has launched the first unit of the Motopanfilo 37M. The ceremony was held in Viareggio. Motopanfilo 37M is a fiberglass and composite yacht designed by Lazzarini Pickering Architects for the interiors and Francesco Struglia in collaboration with Benetti for the exterior. Her elegant lines evoke were inspired by the Benetti “navette” from the ‘60s. On the main deck there is a modern-style saloon and the owner’s suite, which is located toward the bow.On the lower deck there are four comfortable guest cabins and three cabins for six crew members. From the lobby, a spiral staircase winds around the central mast that rises through two decks as it accompanies guests to the sky lounge on the upper deck.The aft part of the upper deck is designed for convivial moments in the open air, with areas for relaxation, conversation and sunbathing. The captain’s cabin is adjacent to the wheelhouse, and on the exterior towards the bow, guests are welcomed by a hot tub and sunbeds.The observation deck, once carved out around the main mast, is positioned above the hard top on the new Motopanfilo 37M. The deck provides a sheltered nook in the sky, absolutely intimate with a special view.The displacement hull, designed by P.L.A.N.A. (PierLuigi Ausonio Naval Architecture), ensures smooth navigation and maximum comfort while onboard. The engine room houses a pair of MAN V12s of 1029 kW (upgradeable to 1213 kW) each, which guarantee the yacht a maximum speed of 16 or 18 knots depending on the engines chosen, with a range of 3,800 nautical miles at the 10-knot cruising speed.She is planned for delivery this September after her debut at the Cannes Boat Show. Founded in 1873, Benetti is the oldest Italian shipyard specializing in luxury yachts. Benetti designs, builds and sells composite vessels from 29m to 44m and steel and aluminium boats from 37 to over 100m. The fleet consists of five categories: Class, Oasis, B.Yond, B.Now and Custom to meet all the needs of the market. Benetti belongs to the Azimut|Benetti Group, the largest privately owned luxury yachting group in the world.Credits: Benetti
August 2, 2021 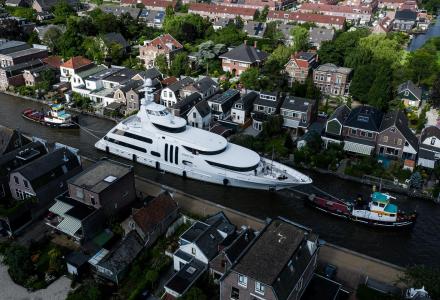 Gallant Lady Returned to The Yard for Refitting
Dutch shipbuilder Feadship has shared photos of the 52m Gallant Lady, which has returned to the yard for refitting.“After she passed a meadow with cows, characteristic Dutch houses, various bridge structures and aqueducts, we welcomed the 52.46m Gallant Lady back to our shipyard for a refit,” according to the shipyard's Facebook page. Feadship was formed as a group in 1949 as a marketing partnership between six Dutch shipyards, de Vries Lentch, Van de Stadt, Witsen & Vis, Akerboom, De Vries Scheepsbouw and Van Lent Shipyard, and De Voogt Naval Architects. Feadship is well-known as one of Netherlands’ most elite yacht builders and delivers superyachts from 50–100+ meters in length.Credits: Feadship
July 30, 2021 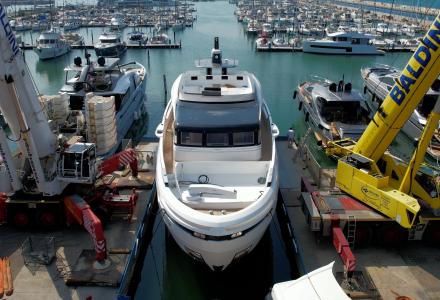 X96 Triplex Launched By Extra
Extra Yachts, a brand of ISA Yachts, has launched the new X96 Triplex. Francesco Guida penned the exterior lines while Hot Lab studio designed the interior. Extra X96 Triplex can accommodate ten people in five cabins of which the full-beam owner cabin on the main deck, and the other four very spacious guest cabins (two VIP cabins with central bed and two cabins with single beds) below deck.X96 Triplex is a comfortable, spacious, elegant boat, designed with no boundaries for fashion and technical solutions, ultimately a mature and well-built boat.The X96 Triplex semi-displacement propulsion system can rely on three powerful Volvo Penta IPS engines of 1000 horsepower each capable of pushing it up to a maximum speed of 16.5 knots and a cruising speed of 12 knots.The Extra Yachts range now offers three distinctive lines: Fast, Loft and Triplex. The world premiere of Extra X96 Triplex will take place at the Cannes Yachting Festival.Palumbo Superyachts began to take root in 2008, when the Columbus Yachts brand was established, and in 2011 launched its first 54 metre superyacht, emblematically christened “Prima” (“the First”). Currently, Palumbo Superyachts comprises a representative office in Monaco and a logistics network of five shipyards in the Mediterranean (Ancona, Malta, Marseille, Naples, and Savona), and also operates the following brands: ISA Yachts, Columbus Yachts, Mondomarine and Palumbo SY Refit.Credits: Extra Yachts
July 30, 2021
All news