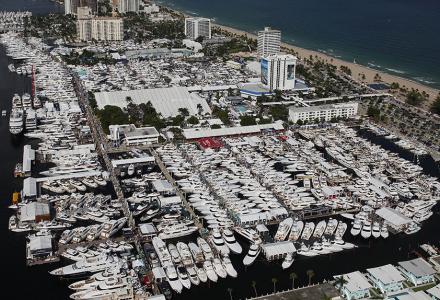 The 58th Fort Lauderdale International Boat Show achieved a 7% increase in attendance and a 4% growth in the number of boats on display over the past year, paying off to Informa that owns and manages the event since March 2017, according to the Group's public statements. 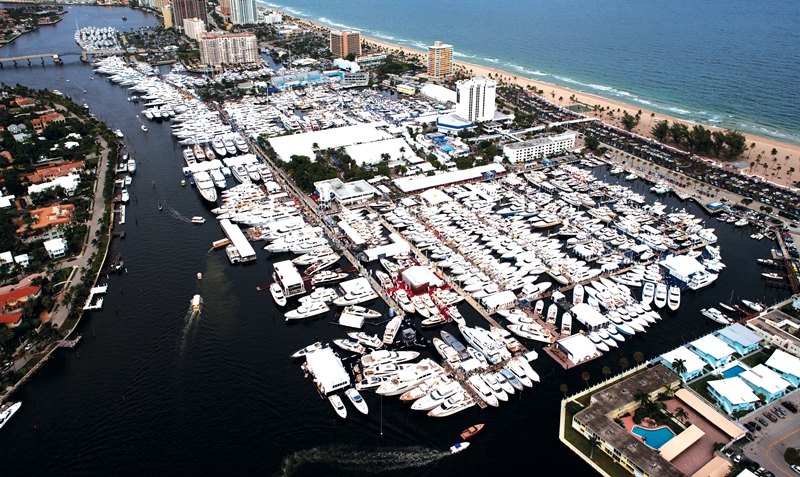 «Informa's investments in the show delivered a superior visitor experience to previous shows,» emphasized Andrew Doole, manager of Informa Exhibitions' division, adding that «excellent weather, a robust economy, realigned marketing efforts and a huge selection of new product offerings» ensured daily flow to the docks and exhibits.
After purchasing FLIBS in March this year, along with four other US-based yacht shows operated by Yachting Promotions, for a total of $133 million, Informa faced many challenges, some of them unexpected. Thus, the previewed investment in the show's infrastructure rose due to the impact of Hurricane Irma that hit the coastal area of South Florida in September.

«Fort Lauderdale International Boat Show went really well, the latter particularly impressive given the limited amount of time we had to pull the event together after the destruction caused by Hurricane Irma,» concluded the Group's finance director, Gareth Wright. 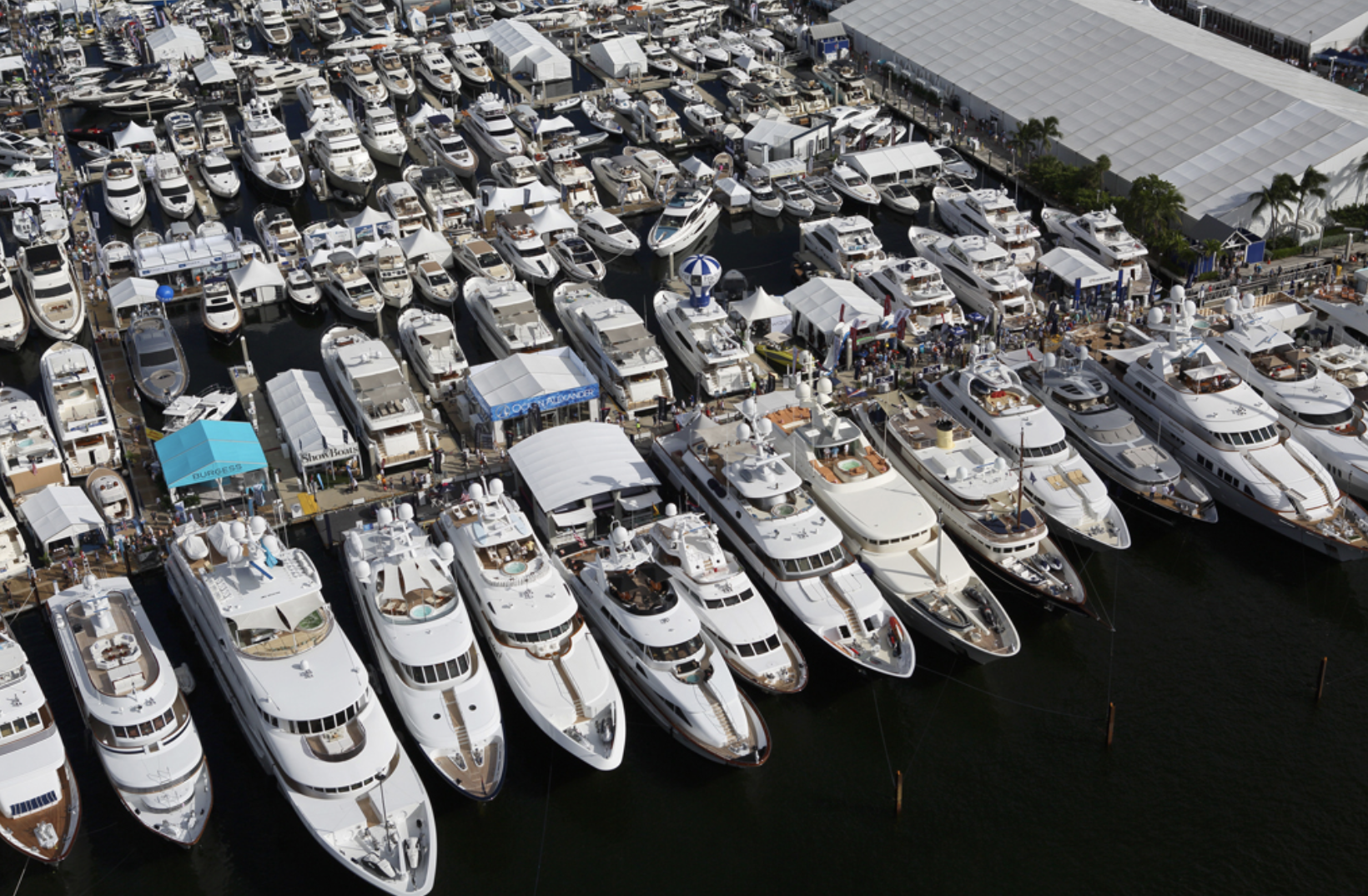 Although a concrete amount hasn't been disclosed yet, it is known that the Group's investment spanned every aspect of the show's experience, from multi-channel advertising to improved management of hotel reservations.
On the technical side, this included new plastic and fiberglass floating docks, new electrical equipment and trucks, as well as improved wayfinding graphics and signage for easier navigation and product location.
Innovations contributed to the enhanced show's appeal to the visitors, an impression confirmed by FLIBS participants, such as Ocean Alexander marketing executive, Sally Dolesky, who pointed out the following:

«We were very pleased with the traffic at this year's show and the feeling of optimism among our brokers and clients. New docks, clear dock-marking for those trying to find their way through an incredibly large location, and increased variety of food and beverage options all added to the enjoyment of our guests at the show.» 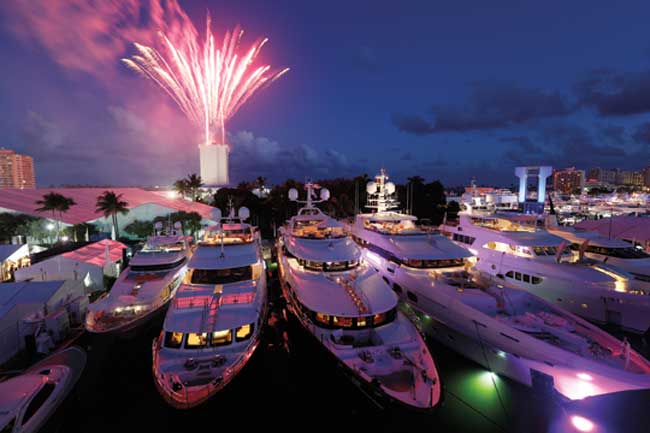 Overall, FLIBS drew a worldwide audience, with nearly 105.000 buyers, sellers, and browsers among them. Customers had a larger selection of vessels to choose from, given the total increase of 4% in the number of boats on display, a 9% rise in new boats under 100 feet – approximately 30 meters – and a 10% growth in pre-owned boats over 100 feet, according to the evaluations presented by the event's managerial team.
When translated into financial terms, this year's FLIBS success also went «beyond expectations», clearly says Informa PLC trading update of November 9, released ahead of the 2017 annual report. The goal for international expansion and scale, set by the Group's Exhibitions' division, led to a revenue growth of 9,2% over the past 10 months.
Each November 3 million square feet of space across seven different Fort Lauderdale locations in the city of Florida are transformed into hubs for the key industry players from across the globe. The recent acquisition by Informa, the parent company of the Monaco Yacht Show, marked a new chapter in FLIBS  history, making it part of a near monopoly in yacht show industry.
Facebook
Twitter
Google+ 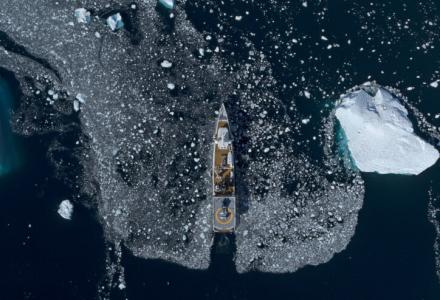 Game Changer for Sale With Edmiston
The expeditionary explorer yacht Game Changer was built by Damen in 2017 and has a total refit in 2020. After recently relaunched she is a true go-anywhere, do-anything yacht. Having completed a circumnavigation as part of an ocean research project, Game Changer is a yacht with proven ocean-crossing capabilities and is Polar Code compliant, enabling her to reach some of the world’s most hard-to-get-to destinations.A helicopter hangar sits below the impressive helipad and can welcome a wide range of models, from a BELL 429 to an Augusta grand or an Airbus 145 T2, improving her potential even further.After the refit the vessel has a beach club and large swim platform allowing easy access to the water, her tenders or many toys.Her interiors by Struik & Hamerslag Luxury are bright and airy, with a colour palette of soft grey with pops of lemon and lime adding a little contemporary flair. There are plenty of comfy sofas and a formal dining table in the main salon, adding to guests’ comfort.She can accommodate 11 guests across five cabins, including an owner’s cabin and two further cabins on the upper deck, plus two additional cabins on the main deck, each with large windows for outstanding views. There is also space for six support staff and 16 crew on board.Powered by four 3,000hp MTU 16V4000 M63L diesel engines, Game Changer has a top speed of 20 knots and a maximum cruising range of 4,500 nautical miles at a speed of 16 knots.Her asking price is $59,354,000. Credits: Edmiston
June 15, 2021 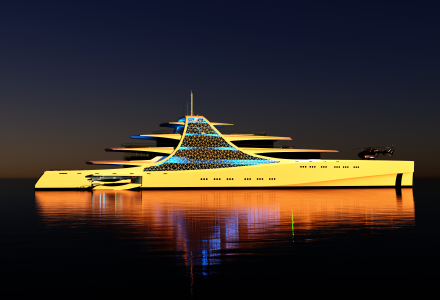 Nick Stark Design Reveals the 94m Project Crystal
The newest Nick Stark Design’s Project Crystal named for the striking crystalline lattice that defines the superstructure, the synergy of the flowing lines and precision of the crystal structure strikes a unique profile."We wanted to create an aesthetic that is celebratory," says Nick Stark, stylist and naval architect behind the design. "The lines flow up and across, both lifting our gaze and also guiding it to what is around us: the people, the community and the environment."The 2500 GT yacht is designed for swift global navigation. Crafted with a relentless focus on hydrodynamic fundamentals, the sleek unadorned underwater lines provide both fuel efficiency and superb seakeeping characteristics. Environmental considerations are also important and extends from the controllable pitch propellers which maximise efficiency, through the hydrodynamic optimisations of the hull, hybrid power systems and glazing arrangements that minimise solar gain.The 94m vessel has three pools – the private hot tub on the owner’s deck, at the sun deck and at the aft deck. "The play of light through the glazed floor of the sun deck spa further opens up the interior of the owner’s deck. The atrium-like effect brings light that is both soothing and dynamic to the lounge below," explains Nick Stark. The beauty-is-more-than-skin-deep focus continues throughout the design, with phased-array antenna systems an option for replacing conventional satellite domes. It looks like Project Crystal has everything for safe, relaxed and beautiful yachting. Spending nearly 20 years as Silver Yachts' senior naval architect, Nick Stark started at Silver Yachts (then called Hanseatic Marine) during the early design phase of hull number one. He worked to help realise the Espen Oeino penned Silver, Silver Zwei, Smeralda, Silver Fast and Bold from concept to sea trials. Opening up a bespoke design studio has allowed Nick to focus on projects that had been waiting in the wings for when he’d have the time, energy and patience to bring them to life.Credits: Nick Stark
June 15, 2021 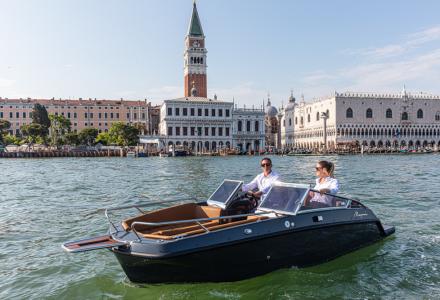 Сomfort and Efficiency: The New "Full Electric" Magonis Wave e-550
The Wave e-550 is the first model from the Italo-Spanish shipyard Magonis. She made its world debut in May at the Venice Boat Show 2021. The shipyard, with its headquarters in Barcelona and production site in Sabaudia, Italy, has drawn on the different influences of the two countries. Catalan creativity and exuberance have been combined with Italian taste and technology to create a boat that, in its 5.50m length (4.96 m at waterline) and 1.98m width, has all the perfect comforts for an enjoyable day cruise, be it sailing on Lake Garda (with all routes permitted, including the ones on the upper lake, forbidden to traditional motorboats), in the sea of Capri or a quick crossing from Ibiza to Formentera. The layout of the deck spaces is based on the bowrider style, resulting in a bow area that can be transformed in an instant from a cosy dinette into an equally usable sunbed. In the cockpit, comfortable seating and a protective windscreen ensure comfortable and safe navigation for up to six passengers. Standard equipment includes a 4kg stainless steel dolphin striker and anchor, a bathing ladder with four large steps, four designer stainless steel cleats. Stainless steel is used for the forward rail and windscreen uprights. There are plenty of optional features: telescopic table, full teak deck, refrigerator, shower, anti-theft device and an 8 sq m XXL awning supported by carbon uprights.Magonis Wave e-550 has a number of solutions that are not usually found on boats of this size, starting with the instrumentation, which has been replaced by a suitably waterproofed 13" iPad that owners can carry with them at all times. There is also a dedicated slot for charging smartphones, while music is provided by a 120 W Fusion system. With a depth of just 0.30 m, it is possible to venture almost to the shore in complete silence thanks to the electric propulsion.In terms of performances: Magonis Wave e-550 has maximum speed of 22 knots and a range of 12 hours at cruising speed. The displacement of 335 kg highlights the vacuum infusion construction of the exclusive Light X Pro technology, developed by the Magonis team of engineers and designers. Motorisation, strictly outboard, comes in the shape of two authentic icons of electric propulsion: the Torqeedo Cruise from 4 to 10 kW (approximately the equivalent of 20 hp), or the new Mag Power 18.0 and 30.0, 18 and 30 kW respectively. The former (with a power of around 40 hp) guarantees the aforementioned speed of 22 knots, the latter a top speed of 16 knots.Prices range from 33,485 Euro with the Torqeedo Cruise 4.0 RL to 68,900 Euro with the Mag Power 30.0, all including VAT.Magonis is an electric boats manufacturer with headquarters in Barcelona, Spain, and shipyard in Sabaudia, Italy. The shipyard was founded in 2017. Credits: Magonis
June 15, 2021 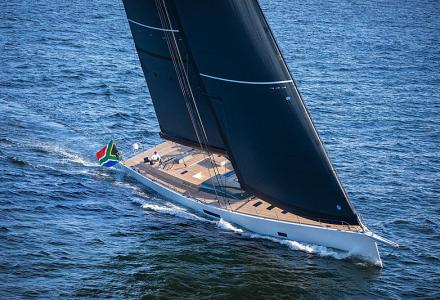 Video: The 32m Sailing Yacht Taniwha Takes Her First Voyage
The Southern Wind’s Taniwha was launched this April and, after extensive sea trials, she took her first voyage. She will travel 7,400 miles to get from Cape Town to the Mediterranean.Her deck configuration and exterior and interior design were made by Nauta Design, and naval architecture by Farr Yacht Design. SW105 GT has a full carbon hull with her foredeck and cockpit in Nomex and pre-preg. Lightweight and with a generous sail plan, the yacht has a mast and boom in high modulus carbon and EC6 standing rigging.She can accommodate six guests across three staterooms and a crew of five.Southern Wind is a boutique bluewater sailing yacht shipyard founded in Cape Town in 1991. Since its foundation, SWS has specialized in the production of semi-custom high-performance superyachts. Credits: Southern Wind
June 11, 2021 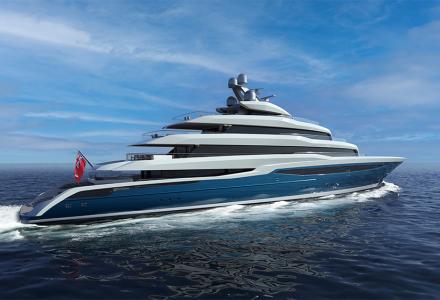 Close Look to the Latest Turquoise Yachts Project Atlas
Turkish shipyard has revealed the 84m superyacht Project Atlas. The four deck vessel was penned by UK studio Harrison Eidsgaard. It’s based on the Turquoise’s existing 80m model, but with a few extra features including an additional lift shaft and tender garage. The garage can hold three tenders – 10m, 8.5m and a 7m for a crew – and two jet skis.The yard describes the vessel as “progressive but timeless.” She has a steel hull and an aluminum superstructure. The interior can be configured in both versions – a “penthouse” or a “foredeck.” She has six guest cabins and an ownre’s suite with a private lounge. The crew quarters, which are the same for both layouts, offer 14 crew cabins and one captain’s cabin.Project Atlas has a spacious beach club with the hydraulic platforms on both sides, and an impressive swimming pool. The hot tub is located at the sun deck.The yacht will be fitted with quadruple CAT C9 engines for a top speed of 17 knots.The yard said in a statement,“Project Atlas is a refusal of monotony. A self-contained world of entertainment, exploration, and energy.” Turquoise was established in 1997 by two leaders of the Turkish boat building industry: Proteksan Yachts Inc. and Turquoise Yacht Construction. After launching the 50m M/Y Turquoise (now called Double Trouble), 20 other megayachts ranging from 40m to 77m in length have since been delivered to an international roster of clients from the United States, United Kingdom, Europe and Russia. Credits: Turquoise Yachts
June 11, 2021
All news